‘The ISIS Leader Does Not Exist’ 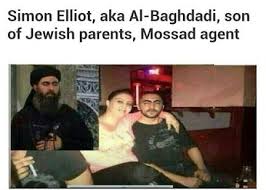 Short n sweet it is then

As The New York Times exposed in 2007, Abdullah Rashid al-Baghdadi, the titular head of the Islamic State, according to Brigadier General Kevin Bergner – the chief American military spokesman at the time - never existed (and was actually a fictional character whose audio-taped declarations were provided by an elderly actor named Abu Adullah al-Naima).

Bruce Riedel, a former CIA official and a Middle East expert, said that experts had long wondered whether Baghdadi actually existed. “There has been a question mark about this,” he said.

there is a Hadith issued by some recent Imam which states that the 'commander-in-chief' of the Mahdi army (sort of what IS favors itself to be) is a person ? identified as 'Shoeib'

I don't know if that is a title or a name... but it sure is not the present Abu Bakr al Baghdadi (aka: al Ibrahim the Caliph) Who appears to get replaced in the very near future

this 'Shoeib' will be in charge of the Armies of Islam when the "immediate coming" of the Mahdi is in full swing
and He will pass the Islam Flag to Mahdi I think....
think of all this as what evolution the IS-ISIS-ISIL-Caliphate will take in a short period of time


Source: see the YT 25 minute synopsis of a movie called "“The Coming is Upon Us” as the search-code for a movie link to YT with English subtitles


I was looking into it the other day, and there wasn't much of a link to MOSSAD.

There was one website which had a hell of a lot of information & discrepancies...
But also a lot of falsehoods mixed in.


I'm going with false on this one.

According to United States Department of Defense records, al-Baghdadi was held at Camp Bucca as a "civilian internee" by US Forces-Iraq from February until December 2004, when he was recommended for release by a Combined Review and Release Board.[18][22] A number of newspapers and cable news channels have instead stated that al-Baghdadi was interned from 2005 to 2009. These reports originate from an interview with the former commander of Camp Bucca, Colonel Kenneth King, and are not substantiated by Department of Defense records.[23][24][25] Al-Baghdadi was imprisoned at Camp Bucca along with other future leaders of ISIL.[26]...

Thanks, I was just going by what the media was saying.

I Know your heart was in the right place... but even my source is calling him jaild for either 10 months or 4 years... fogs-of-war no doubt

posted on Jan, 24 2015 @ 04:22 PM
link
they probably get their orders from "mr big" over a cellphone or internet, and nobody really knows who is in charge on the other end of the phone.

I DO NOT EVEN CARE

All I know is that US congress gave 500 million to Syrian rebels, Canada gave 90 million, UK Saudis Israelis gave money too

And next thing you know, we got ISIS as a big bad everything

Almost certainly not CIA or Mossad.

ISIS is very real and their rise is well documented if you know where to look, or care for the truth, rather than what you want to be true..

I was only having some fun, Mr Stiffy Stifferson. More of a "hey wouldn't that be crazy if..." kind of thing. A bit of creative writing, if you will. Much is lost over the keyboard, so I don't really blame you... even though I hoped my phone scenario complete with the Mr. Big reference would suffice as an adequate clue.

I do, however, say my scenario is possible at least. Obviously ISIS today is a different animal than when it had its legitimate birth. The possibility it has been co-opted by western interests deserves to remain a theory.

The Mehdi Army is a Shia organisation - not sure what connection you're trying to make to IS but you're barking up the wrong tree there fella.

Then what you "know" is extremely limited and you have clearly done bog all research of your own. IS has been around since before the Syrian rebellion, it just went by another name before rebranding in 2013.

I suggest you do some leg work.

originally posted by: AlphaHawk
a reply to: 3n19m470

Almost certainly not CIA or Mossad.

ISIS is very real and their rise is well documented if you know where to look, or care for the truth, rather than what you want to be true..

You say Isis is very real.
The only thing I've seen of Isis is this fella who's supposed to be cutting people's heads off...which some people are questioning.
I've never seen a news report with an army of Isis or someone from Isis firing a gun.
They seem to have oil refineries in Syria. Fox News are saying they have a stronghold in Syria from where they are taking photos of the Japanese guys.
They seem to be everywhere but nowhere.
They're in Syria because that's where the west need to invade. Russia stopped the west invading Syria two summers ago. Then Isis appeared in the news.
The thing is that I don't really know what Isis are actually doing. Okay we are told of the beheadings and that they marched through Iraq and all the soldiers dropped their weapons and ran away.

originally posted by: lambros56
You say Isis is very real.
The only thing I've seen of Isis is this fella who's supposed to be cutting people's heads off...which some people are questioning.
I've never seen a news report with an army of Isis or someone from Isis firing a gun.

That's like me saying because I have never watched a game of Baseball, Baseball doesn't exist.

Do some bloody research - it won't take long.

Your stuff doesn't work on me, sorry

ISIS was small time nothing, after influx of US congress money Isis is huge and global

You should do leg work not me

Care to present any evidence of US Congress money being sent to IS?