U.S. President Barack Obama will visit Saudi Arabia on Tuesday to meet its new King Salman after the death of his predecessor Abdullah on Friday, testimony to Riyadh's important role in energy markets and the fight against Islamist militancy.

Obama will cut short a visit to India to pay his respects instead of Vice President Joe Biden, who had been scheduled to fly in from Washington, the White House said on Saturday.

Muslim leaders paid their respects on Friday at Abdullah's funeral in Riyadh.

Some international human rights groups, meanwhile, have called on Western leaders to condemn Saudi Arabia's record of crushing dissent and depriving women and foreign workers of rights instead of praising its late king. Source


I agree. And I swear I hate this world.

suspect the security bill will be terrific especially if ISIS could get themselves into saudi for this guest list of despots all together.

Your point is quite correct in my view and would refer to a lot of other countries where interference from foreign governments has happened recently. However old our leaders get they never learn from their mistakes.

posted on Jan, 24 2015 @ 05:26 AM
link
Condolences?? Right!! They want a role in politics there. Also they want them to keep supplying combatants as most groups that the USA are being fought against were created by the USA, Saudi Arabia, Israel. Just another way to rob from them and the USA citizens to make the rich that bribe the gov richer. Now new prime rate decrease for car loans. That will end up like the other forced bubbles ended too. Rob from the average citizen and give to the rich.
edit on 24-1-2015 by roth1 because: Added more comment.

posted on Jan, 24 2015 @ 05:39 AM
link
Personally i think i am going to vomit. Offering condolences to a dictaor and tranty with a record of behading innocent people and the smear ill treatment of gay people in Arabia.

At least in Russia you wont hang if ur gay.

And they all come together through devotion to wealth and power. Hypocrites!!

Why the world leaders have to travel all that way, putting everything else on hold for a ninety year old that died is a bit beyond me.

Was not 'untimely' or 'unexpected' was it now.

But hay, any excuse for a get together. I wonder if Obama is going to be cracking jokes and laughing at this one.

Your thread title should read:

Obama, world leaders head to Saudi Arabia to bend over

I agree. Im right there with you. Crap like this makes me sick and sad to be an American. 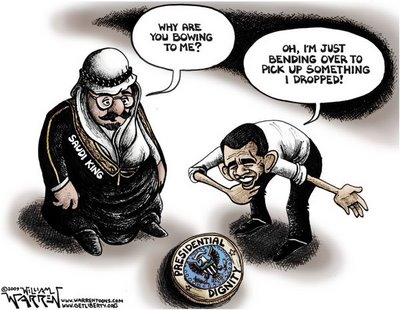 ProfessorChaos
+6 more
posted on Jan, 24 2015 @ 07:17 AM
link
So, a bunch of people are killed in France, for exercising free speech, and he sends John Kerry, and James Taylor (late, and most likely due to the public reaction of not going at all).

No one is sent to show support for Nigeria, against Boko Haram.

The King of Saudi Arabia (whose family is known to bankroll terrorism in the U.S., and many other places) dies, and he (Obama) drops everything to go pay his respects...

Sounds about par for the course, as far as this guy is concerned.

***EDIT TO ADD***
Someone, please explain to me again, how is Barack Obama NOT an Islamic terrorist sympathizer...
edit on 1/24/2015 by ProfessorChaos because: edited to add

Every time I think of it, I remember the opening of Monty Python and the Holy Grail, and think anybody who believes in the legitimacy of a king has to be stupider than a middle-age peasant.

originally posted by: mcChoodles
The only significance of his death is this opens the door to releasing the redacted 28 pages from the 911 Report.

Ha! Feel free to hold your breath on that, if you think it will actually answer any of the questions that remain from 9/11. The government is not going to give out anything that goes against the official narrative.

Tool ate to change it.

You know...for just a brief shininig moment, I had hope he wouldn't go.

Then again, they'd probably nuke us or something if he didn't.
edit on 1/24/2015 by ~Lucidity because: no typing within two minutes of waking up

Meh I don't think Boko Haram and Charlie compare. I'm not in the least upset he didn't go to Paris. It bugs me that he's going to SA.

ETA: I don't think he's a Muslim or a terrorist but i certainly think he works for some...those some in the controlling cabal, among whom are probably a few Saudi kings and princes.

The excuse I thought I heard was security and not enough notice. It takes time to move a president.

Not enough notice is nothing more than an excuse. They have the logistical manpower to move the president anywhere he wants to go on a whim.

I apologize if I come across crass, that's not my intent. I really just do not like the priorities of the man that is representing my country.
edit on 1/24/2015 by EternalSolace because: Clarity

Of course they do. And enough security too. But I'm still not concerned he didn't go to Paris.