This means that we might not end up having Tory bastards in power next time around! I think that would be a good outcome.

I can only hope you are right, they have turned this country upside down since being back in the driving seat...I am still at a loss as to who voted these clowns in!

I would imagine even if encryption were made illiegal, surely we in the UK could still find a way to use it, just that it would become another charge on your wrap sheet if you get caught alongside side the other terrorist activities you may have comitted, or if you are the average person..akin to recording the Top 40 off the radio on a Sunday afternoon?

Either way having Cameron try to curb my privacy, by preventing me from using encryption, just makes me want to use encryption...up til now I have never felt the need, nor tried it.

However saying that. The internet eventually must eventually go away. I mean it could just be that I am pissed and to lazy to remove all this crappy cookies and spyware from my computer, really really lazy. But in all I think it has gone as far as it can go, and as such its a mute point by now.

So ya! A internet killswitch is a good idea for sometime latter down the line. Though what that old guy is talking about is, well it just wont work. Something more much more effective will have to be implemented. Besides what the hell is this encryption thing anyways. I mean you all take your plays so seriously, its not like nobody knows were everything is headed anyways. So dramatic, like a long drawn out play were really there is nothing that which anybody does is a freaking secret. That word probably should be removed from the dictionary. Least we have more weirdos thinking there anything but see through.

originally posted by: galadofwarthethird
I mean it could just be that I am pissed and to lazy to remove all this crappy cookies and spyware from my computer...


From someone who participated in the script for this episode, has always been working with various forms of Internet security, and has consulted on several privacy initiatives…

Cookies are not a significant concern. The "anti-malware" propaganda has feed you misinformation about cookies, in all my years of working online, I've never deleted nor rejected cookies unless it was part of testing specific code.

posted on Jan, 20 2015 @ 12:11 AM
link
a reply to: SkepticOverlord
Well considering it took me over 30 minutes to try and load this thread on ATS. I mean all the other sites were at least working, ATS however would not even load for me, and oh man. Did you know you got all kinds of # on your site. Whats that phrase. It was like flys on #, there everywere I tellz ya. Must be some sort of conspiracy.

But whatever it was, some stupid malware thing. I removed it and now it seems to work just fine now. And yes I blame cookies, it only started when I turned that cookie blocker off some days ago, that and probably clicked on random thing that I should not have. # happens you know.

But anyways! Continue on. Personally I think the world may just be better without the internet. But I suppose even with a killswitch it would be like weening addicts off there addictions, maybe we can dial them up to 56k, by the time they load there favorite site or youtube vid they may just go to the store and back have a smoke, cook dinner, go out again, return, build a bird house, get a second job, come back...And it would still be in the loading screen. It would be the most super effective way of getting people off the internet. Making everything super slow.

Besides what would people do without internet and posting secure crap which nobody cares about. It would be like one vast migration of lost souls, moving from building to building looking to get hooked in. Some would literally end it all right then and there the day the internet goes blank.

Who knows maybe some may begin trying to will it back to work. That or sacrifice a chicken to the internet gods or something. And no I am not joking. If the internet actually went down one day. You best believe people will be sacrificing chickens or something in the hopes of getting it to work again.

originally posted by: neformore
Interesting article from the Guardian on this issue...


When a politician like David Cameron doesn't get his way because he doesn't know what he is talking about, instead of admitting defeat, he will probably push forward in ignorance and cause a bloody mess.

The article does a good job covering the issue, thanks. One shouldn't assume that Cameron won't go absurdly out of his way to ban encryption in the U.K., don't assume that he is smarter than he is, and that he is less powerful than he is. He could easily do something stupid and outlandish.

Other security experts echo Cluley, describing the approach as “idiocy” and saying Cameron’s plans are “ill-thought out and scary”.

See, Cameron can do whatever he wants to - as long as he has the media sing his song, people won't know what is really going on (bad policies that are more harmful than good).
edit on 20amTue, 20 Jan 2015 00:24:45 -0600kbamkAmerica/Chicago by darkbake because: (no reason given)

The Electoral Commission has been asked to examine whether £775,000 paid to the Lib Dems by Rumi Verjee, the entrepreneur who brought Domino’s Pizzas to Britain, is an “impermissible donation”.
The payments were made through Brompton Capital Limited, a company with no staff that has not recorded a turnover since 2003.

The system is corrupt and we still discuss it with credibility like it deserves respect. 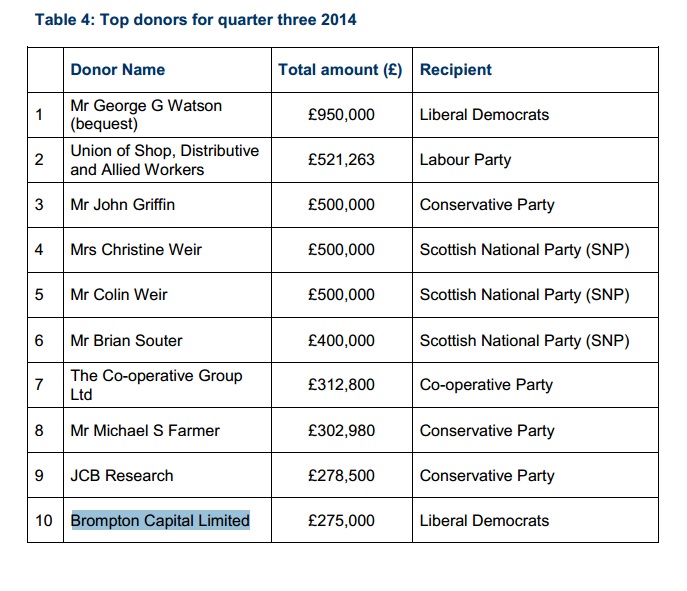 posted on Jan, 20 2015 @ 05:59 AM
link
An internet without encryption is unimaginable. How about banning all physical locks as well. So the police doesn't have to use any tools to get into the house of a suspect.

But I can understand the frustration of secret services suspecting 2 terrorrists are emailing plans to one another and are unable to read those communications.

A better solution I think would be to invest more in the education of the masses in IT so they might more easily recruit university level IT personnel and write virus like software so they can tap/bug suspects computers. The world needs more skilled IT personnel and more encryption (techniques) not less. Or maybe striking deals with OS or hardware manufacturers to build in backdoors only top level secret services know about. Sure it's not ideal but at least that way only certain government people might hack into computers and have a chance at catching terrorists.

posted on Jan, 20 2015 @ 07:57 AM
link
Cameron's head is full of fluff. He must be crazy on acid if he seriously thinks he can make this whacked proposal happen.

As for the idea of activating an internet kill switch it will be a global catastrophe because so much of our soceity and business is hardwired to the use of the internet. It would be like a second Tower of Babel.

posted on Jan, 20 2015 @ 08:22 AM
link
It's not about banning encryption as the end game. Banning software is impossible. Even making the use of it illegal is next to impossible to enforce. But taking control of the Internet as a whole and then changing it into a state run, very limited, Corporate controlled environment where interactivity devolves into only being able to point and click? THAT is possible and THAT is what these asshats want.

ETA: S&F as always Joe! You're starting to get past the stage jitters now and are beginning to come across like a seasoned video crusader!
edit on 1/20/15 by Hefficide because: (no reason given)


You mean a parliamentary democracy.

posted on Jan, 21 2015 @ 03:40 AM
link
It should be made clear that although it was David Cameron that said this. It wouldn't matter who gets elected, be it labour, conservative, lib dems, greens or ukip. They will all go down the route of privacy invasion in the name of national security. I promise you it doesn't matter who you vote for.

posted on Jan, 21 2015 @ 10:38 AM
link
I'm not seeing the logic here. Generally speaking, encryption leads to better security of data. Outlawing it would only leave their system more vulnerable. It sounds similar to how Sony intentionally left certain backdoor ports open to attack on the sony network. What is the real purpose here? Obviously data security isn't the main priority. It sounds like they just want to control the internet completely.

posted on Jan, 21 2015 @ 02:26 PM
link
Their problems are much deeper than that, they are being over ran by Muzzys. If they don't act, Britain will become a Muzzy country by attrition.

posted on Jan, 21 2015 @ 04:31 PM
link
British politicians always want "to do something" whenever there is a terrorist attack somewhere. Either it is "a review of airport security", "a tightening of procedures" or "an overhaul of the security services". Each case it involves banning something, more screening or surveillance.

As the previous commented noted, this is aimed at all those Muslim radicals. But even if encryption over the Internet was banned, they could just use memory sticks or send messages by human messenger or even hand-written cypher code.