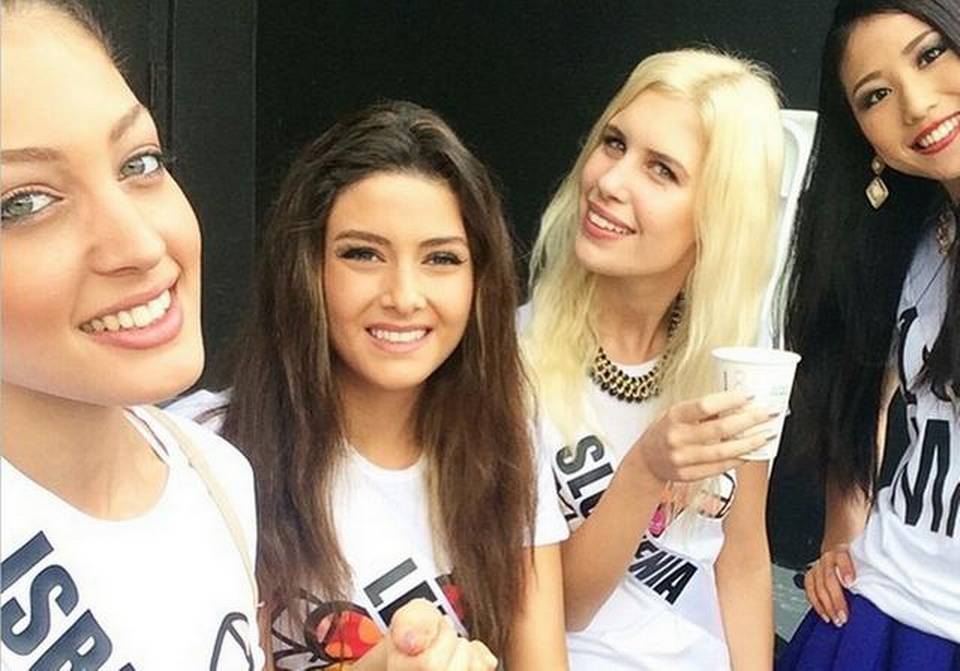 The trouble started last week, when this year's Miss Israel Doron Matalon posted a photo on Instagram featuring herself alongside Saly Griege, this year's Miss Lebanon, and her fellow contestants from Japan and Slovenia.

The picture caused an uproar in Lebanon, which has a law forbidding its citizens from fraternizing with Israelis. In 1993, the government disqualified its Miss Universe representative after Agence France-Presse moved a photo of her smiling arm-in-arm with her Israeli competitor.

For her part, Griege claimed that she had been the victim of a sinister photobomb, writing on Facebook and Instagram, "I was very cautious to avoid being in any photo or communication with Miss Israel (that tried several times to have a photo with me) ... I was having a photo with Miss Japan, Miss Slovenia and myself; suddenly Miss Israel jumped in, took a selfie, and put it on her social media."

Upon hearing the uproar back home, Miss Lebanon Saly Griege threw Miss Israel Doron Matalon under the bus and accused her of photobombing the picture that was being taken of herself with Miss Japan and Miss Slovenia. The rather adult response from Miss Israel was "Too bad you can not put the hostility out of the game, only for three weeks of an experience of a lifetime that we can meet girls from around the world and also from the neighbouring [sic] country."

Take a look at the photo in the link above. Sure doesn't look photobombed to me. It looks like pretty young women from different countries getting along just fine. Obviously they know where each other is from - it's plastered on their T-Shirts. They all look happy and relaxed and not polluted by country politics. They all look aware of the picture being taken and they look like they are posing for it .. no problems.

I'm surprised at the Lebanon laws against the Lebanese fraternizing with people from Israel. I'm surprised at the childish outrage of the people of Lebanon against these women sitting together and getting along. I'm shocked at how quickly Miss Lebanon threw her new buddy, Miss Israel, under the bus. I know her title is in jeopardy back home because she dared sit next to an Israeli, but it would have been a good teaching moment for the people of Lebanon to learn that Israelis don't have cooties. But I guess I understand her being afraid of the consequences of speaking out against the silly non-fraternization law.

Here these young women were getting along just fine and learning about each other, and old bigotries and politics destroyed it. I'm sure people will post how stupid these pageants are anyways but I"m seeing a missed learning opportunity for the old farts back in their respective countries. The story is sad.

posted on Jan, 19 2015 @ 07:18 AM
link
So women from these countries can't even sit together and hang out? These cultures really have to at least get to the 19th century, I don't think that's too much for the world to ask.

posted on Jan, 19 2015 @ 07:19 AM
link
Her having to say the "victim of a photobomb" thing is very, very sad because she was clearly afraid and pressured to say that. As you said, it doesn't look like a photobomb (maybe a selfiebomb), and a touching and teachable moment of hope for humanity ruined again by politics and governments who clearly really don't want us to get along.

Yep. That's the law in Lebanon. And 20 years ago a Miss Lebanon contestant was disqualified by the Lebanon gov't because she had her picture taken, arm in arm, with Miss Israel. That was 20 years ago and the mentality hasn't changed.

posted on Jan, 19 2015 @ 07:21 AM
link
i can't even explain how happy i am that i was born in the normal (comparatively) side of the world.
People love to take a # on the place they live in, but when i read this kind of stuff, i want to hug the streets, the lamp posts, and even freakin city hall.

craziest part is they don't even know how stupid they look to the rest of us.

edit on Mon Jan 19 2015 by DontTreadOnMe because: Mod Note: Do Not Evade the Automatic Censors

True. Obviously all four young women knew which country the others were from. They were all sitting together smiling and they all knew that the picture was being taken. It wasn't a 'stolen picture'. No one photobombed ... it's obvious that they all posed for the picture.

What started as a selfie with several Miss Universe contestants on a tour of South Florida has blown into a political storm across the world.

Miss Lebanon, Saly Greige, is facing backlash back home after she posed for a picture snapped by Miss Israel, Doron Matalon, according to the Beirut-based Daily Star.

Matalon posted the photo to Instagram on Jan. 11 of herself next to Greige, along with Miss Slovenia and Miss Japan. The picture shows the four smiling beauty queens in Wynwood with the caption “Good morning from us!”

But it wasn’t long before the Lebanese contestant started feeling the heat for posing with the Israeli contestant. Lebanon considers Israeli an enemy state and bans contact between the countries.


Her having to say the "victim of a photobomb" thing is very, very sad because she was clearly afraid and pressured to say that.

It was her own choice to let herself become afraid and pressured to say those things. She could have stood up for what was right, instead of play the victim card.
She was in the wrong..... accept it.

On a side note: Miss Israel clearly wins the beauty contest!

I would sleep with all of them... Why the discrimination..

The law, I believe, is actually something more regarding communicating with a person from an enemy state, and Lebanon and Israel are certainly enemy states.

I'm looking but I don't see the penalty. Also it might be a military law and fall under the category of treason.


ETA: This is all I have found so far but it doesn't directly state either thing...fraternizing or communicating.


Lebanon
Death penalty in law
The constitution does not refer to capital punishment. The mandatory death penalty for some offences
was repealed in 2001 but remains in force for collaboration with the enemy and treason.
Capital offences include attacks on property, including arson against certain types of structures, or
sabotage of communications, transportation or industrial facilities causing death; gang assault
involving torture and robbery; and gang assault if killing is committed in pursuance of a criminal
activity; murder; sedition for the purposes of starting civil war, sectarian or religious strife, or
promoting massacres or pillaging if the sedition is successful; and recidivism in relation to serious
crimes. A person sentenced to perpetual forced labour (the most severe non-capital punishment) who
commits a second crime of the same severity may receive the death penalty.
“Terrorist” capital offences include: complete or partial destruction of a building containing one or
more persons, importing nuclear, toxic or hazardous waste or polluting rivers or waterways with
harmful substances.
Acts of treason punishable by death include: bearing arms against the state on behalf of the enemy,
espionage; interfering with munitions or supplies of the army during wartime or threat of war, or if
causing death; participating in manoeuvres with, or passing information to the enemy, or to a foreign
power for purposes of hostilities (in the latter case, only punishable by death if the action has
consequences). [Source]

posted on Jan, 19 2015 @ 07:46 AM
link
This is one more example of how us regular folks just want to get along and how our stupid governments can't stand that idea. Most people just want to be happy.


On a side note: Miss Israel clearly wins the beauty contest!

I would sleep with all of them... Why the discrimination..

I agree that all are hot but I think my Korean friend may be correct in saying that my time in Asia has given me a rather severe case of Yellow fever, the 3 whiteys I put between 7.5 and 9 out of 10 while Miss Japan gets about an 18.
She is absolutely smoking!!!!!!
To bad Im at best a 6 and I doubt she would look at me once let alone twice

she sure was cheesing hard for someone not wanting their picture taken.
i guess she is worried that she will be branded a jew lover and a hezbollah hit squad is on the way to chop her head off.

now i have heard everything.

originally posted by: Stormdancer777
a reply to: FlyersFan

now i have heard everything.


Kind of like McCarthyism, eh? Glad those days are over here. On the surface anyway.

If miss Israel was aware of the detrimental effects it could have (seems like she would - but also.. you know, beauty queens). It seems like she would have avoided posting it so she disnt get the fellow contestant in trouble. Also I do believe miss Lebanon is saying what she is saying out of fear, but if miss Israel was in control of the camera and snapped the pic she xould have in fact walked up and snapped a selfie with the other girla before they realized. I onlt say that because miss Lebanons statements about being careful not to be in a photo with miss Isrqel dont sound like they are based out of hatred but just caution because of what had happened previously. Im sure ahe knew a miss lebanon was disqualified for a picture with miss israel before.

posted on Jan, 19 2015 @ 08:34 AM
link
Miss Israel photobombed the selfie? I know I'm not real bright, but wouldn't Miss Israel have be the one holding the camera to take that picture?