If you've ever wanted to live out the fantasy that you developed watching the movie American Sniper recently, by hitting a target so far away that even professional soldiers would be impressed with your amazing marksman skills - but you lack the ability to shoot very well. Don't sweat it, there's a Linux app for that!

Actually there's an entire portable weapons system ( read computerized rifle ) that uses Linux to make up for your lack of skill!

Or rather, it used to be extraordinarily hard to hit a target consistently at 1,000 yards or more. Now, thanks to Linux, TrackingPoint, an Austin, Texas, business, will allow almost anyone to hit not just 1,000-yard targets, but also ones that are up to 1 mile, 1,760 yards, away.

First, the 338TP uses the .338 Lapua Magnum long-range rifle for its base. This rifle started as a design for a US Marine sniper rifle. Then, to acquire the target, the rifle uses a laser to enable you to "tag" your target. More than just a laser-targeting system, its sensors also track wind speed, direction, temperature, and barometric pressure. As serious shooters know, all of these factors must be taken into account for an accurate shot at great ranges.

This data is then passed on to the built-in Linux computer. Once you've tagged the target, the rifle will automatically track it. You then bring your reticule, the optical target-aiming point, to match the rifle's computed impact point. Once you've matched it up and you decide to take the shot, you pull the trigger and the TriggerLink computer works out all the details needed to hit the target. Thus, and this is surprising until you get used to it, there may be up to a second of delay between the time you pull the trigger and when the shot goes off.

Once you get used to it, is it really that accurate? It works well enough that the US Army is testing it. In one review, it was found that users of an older model were getting 70 percent first hit accuracy at 1,000 yards. A trained military rifleman, not a sniper, would hit about 5 percent of the time. 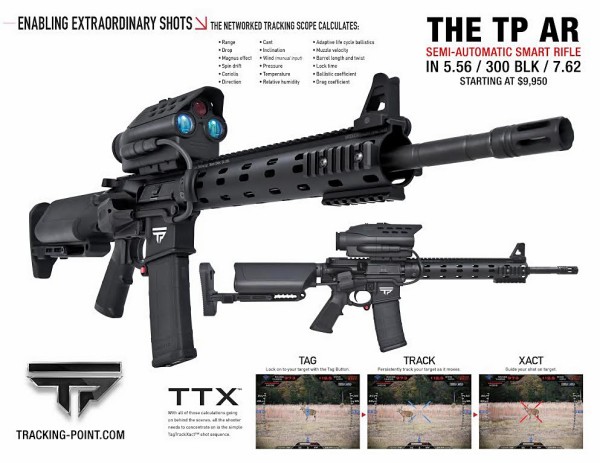 Of course the ability to cheat training, skill, and natural ability does come with a price tag - a rather hefty one. The current production model, included just as proof of concept in this OP, is only good for a third of a mile and it costs $7,495.00. The model described above is slated to carry a price tag above $40,000.00.

There are some deeply disturbing implications to this technology going mainstream. For example, now any combatant with enough money can effectively take on a role normally reserved for the few who have natural talents for shooting and who spend countless hours honing those skills to a fine point.

Another is that this comes one step closer to enabling the government to consider certain types of computer software as munitions or terrorist paraphenalia - getting many of us put on watch lists. This is a very real fear. Long before the war on terror it was illegal to carry any media containing a program called "PGP" ( Pretty good privacy) outside of the country. Trying to do so fell under the same penalty that one would face if they were trying to climb onto a plane carrying plutonium.

The irony there was that PGP was available, globally, for download. For free. Everywhere.

By no means am I an expert in exotic weapons or even high end weaponry, I do find this particular technology to be exceptionally interesting in a myriad of ways. WSY gun experts of ATS. Can tech overcome natural ability? Could a system such as this see a new breed of killer - school shooters taking out classmates from a vantage point a mile away? Could this make us all into potential American Snipers?

If you've ever wanted to live out the fantasy that you developed watching the movie American Sniper recently, by hitting a target so far away that even professional soldiers would be impressed with your amazing marksman skills - but you lack the ability to shoot very well. Don't sweat it, there's a Linux app for that!


I refuse to watch American Sniper The trailer was enough pap for me.

However, I fear that technology does, and will even further, allow the mediocre to become exceptional.

We have so much potential and yet we waste it on violence, and enhancing violence.

It is still a long long way from replacing the Sniper.. Accurate long range shooting is only one part of the skills necessary to effectively carry out the snipers mission.. In all reality, a fairly small part...

Regardless of what the movie culture may claim, snipers rarely even attempt shots beyond 1K meters in real life scenarios.. It is not unheard of, just not that common.

A sniper lives a tough and solitary life and one wonders how resilient such tech would be when dealing with days and weeks in the field, in every kind of weather.

As for a software making people snipers...not too sure, i've played at least 400 hours of battlefield 3, and i still can't throw a paper in the trash bin on my first go.
There are a lot of different factors that come into play, like the weight of the gun, the type of terrain you are on, queues that your body gets from the environment that at least for now, cannot be replicated with a software, and then of course, the most important difference of all: you are in front of your pc, in no real danger, being able to focus uniquely on one thing, in real life, you would have a thousand different things happening around you, a tad bit more pressing than "did i turn off the coffee machine?"

I did not see any reference to "Bullet Spin"..Did I miss it?

At extreme ranges the spin of the bullet comes into play as well...

No this is a handheld weapon, you would not be sitting in a remote location using it. You'd be pointing and shooting. The software only tries correct your aiming mistakes.

I quite like reading your posts, they are always informative and intelligent.

Technology as advanced as it is in the twenty-first century, and as it has always been in past incarnations will be misused by the criminal elements of soceity. I will not be surprised in the years to follow the scenario of new breeds of killers you speculated. Given time after a number of shootings that utilize this kind of weapon software the government will promptly step in to save us all and make a huge general sweeping ban just as you mentioned.
I expect a certain amount of Black-Ops in the near future will be using this new technology.

I honestly don't know Semper. I found this article just a little while ago and was sucked in as it crossed into my area of interest, and then was somewhat amazed by the claims and implications involved with computer assisted sniper rifles.

It does say that the software is similar to that used by fighter pilots - my research plan is to back-step and start researching that software platform as best I can ( legally ) to see what sort of factors it may weigh and calculate.

posted on Jan, 19 2015 @ 05:14 AM
link
Imagine if you will a sniper rifle mounted onto a stealth drone.
Target is found by satellite and other intel sources, drone deployed to target area. target confirmed. Shot taken. This could be done from just a few hundred yards, if not closer.

How long before this is a reality? Is it already?

Make no mistake, this is the direction the US Govt is going.
With a single bullet there will be much less collateral damage than a missile or rocket strike. No worries about something going wrong and American troops being killed.

A mile away is pretty concealed in most cases.

posted on Jan, 19 2015 @ 08:00 AM
link
a reply to: Hefficide A mile from your target sure. That's not to say you'll be shooting from the roof of the sergeants mess though.

So many have criticized the technology as a way of making snipers out of criminals. But the fact is the tech doesn't do that. It can't. It doesn't track moving targets. It tracks the known point of a user input target. It takes into account caliber, barrel length and distance to compensate for bullet drop in order to place the round on target. At more than 500 yards this technology does not account for many other factors that affect bullet trajectories:

Weather. Is it raining? Is there fog? What the humidity, barometric pressure for the day? How hot is the ground? Because that will create some bad mirage at distance that can affect getting a clear picture of your target and could affect the optics on Tracking Point. What about winds? Not just where you are but the wind speed and direction where the bullet will be? How about ambient temperature?

Are you shooting at night or during the day? What about the Coriolis effect?

Edit> This video accounted for East to West shooting which gives you up and down deflection. North and South shooting will give you left and right deflection.