The Truth "Behind" The Charlie Hebdo Solidarity Photo-Op 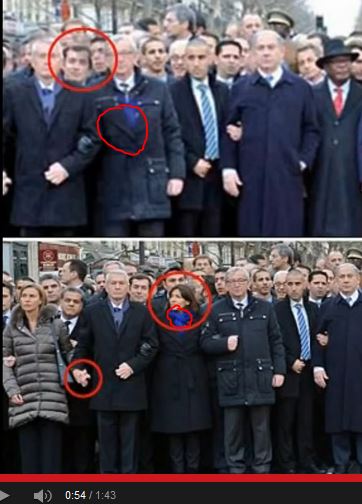 The sloppy red circles are what I've added.

In the top picture, you can see where there is an extra lapel added where the arm was removed. Look closely, it's actually the leftovers from the woman's jacket. Whoever did this was rushing and missed seriously obvious details. How you are overlooking them is beyond me.

In the bottom picture, I've highlighted the specific dark blue line running through the woman's scarf, which can also be seen in the top (after) photo on the man's chest area. My first circle makes this hard to see, but look for yourself on the version available to you.

You can also see the zipper on the man's jacket in both photos, it doesn't move.

I didn't bother circling the man's hands being sans-glove in the bottom shot, but the man (for some reason) put a glove on one hand and miraculously placed it in the exact same positioning of the woman's hand in the top shot.

Very interested to see these other differences you are talking about, maybe when you get to the P.C. you will see that you're way off.
edit on 1/19/2015 by ChaosComplex because: (no reason given)

originally posted by: James1970
Here is a video from the comments section in the article.

I learn some new filth about Israel almost every day.

Yeah well they also edited this out. We should all be outraged! 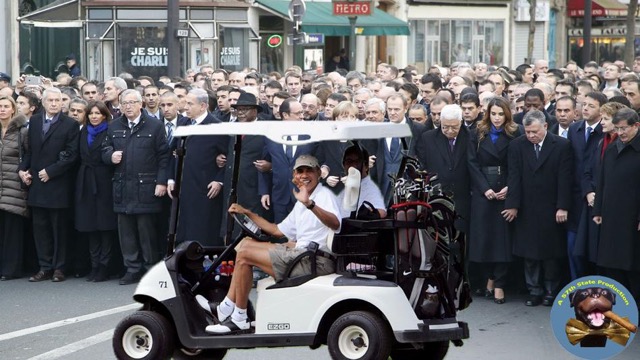 I know these awful politicians are targets and need protection - people are out to kill them. But if they can't even get SOLIDARITY right, what are they good for? For once in their professional lives, they could have gone out into the crowds of people instead of being cowards.

The irony of them wanting the public (voters) to March Against Terror whilst they won't even take the chance of joining them says so much...


Yes Kandinsky, That Reply of yours pretty much sums this whole Stinking Pile O Fish. You cut to the chase and encapsulated The Missing Heart and Spirit that has always been absent within these people. No wonder The World is in the state it is today. Thanhs Again for your concise observation and Peace Arjunanda a reply to: Kandinsky

I read the Independent's sister daily newspaper, termed the i, which is absolutely, 100%, much more reliable than any other British newspaper, in terms of getting the most unbiased news coverage in the UK. It's not perfect, and some of the columnists really grate my mind, but that is a price I'm willing to pay in order to have reporting from journalists of ALL political/apolitical flavours, not just one 'party line' being spun day after day. It is quite literally the only newspaper in the UK which does not try to influence the way the reader should vote, and this is to be highly, highly commended. I heard the other day that the Daily Express was planning to 'align itself' with UKIP prior to our upcoming May 7th General Election. Travesty in the making. The owner of the Independent group is a Russian entrepreneur, Evgeny Lebedev, and he seems a fairly decent bloke, though I confess I haven't done much research on him - though I did send him a FaceBook message congratulating and thanking him for his Christmas charity initiative by which he was ensuring vital front-line support to military veterans facing homelessness and related crises after finishing their active military service. Some great work done there, really great - many articles with true stories of hope and renewal were printed in support of the charity drive, with some great publicity for military vet charities.

As for that election, it's set to be one of the most interesting in living history, with five parties or more in the running for power-wielding sections of the vote. One piece of great news is that membership of the Green Party has ballooned in recent weeks as the furore over live TV debates between political leaders has spiralled into controversy. Originally the Greens were due to be left out - unfairly - and UKIP (the headline grabbing fascists in sheep's clothing) were scheduled to be included. The one and only time I'll ever thank a Tory for anything was when David Cameron stated he would not participate in biased debates, in which a party of greater membership numbers & an equal political seat standing when compared to UKIP were to be excluded. Thanks to the debate raging around his reasons for making that statement, the membership of the Greens has swelled remarkably, as people actually take the time to read their manifesto and realise "Hey - these guys sound fair, balanced, and downright sensible!"

I know we won't get a one party government - and yes, I know that behind the scenes most stuff is rigged anyway - but at least our next Caesar will have to talk about things from a variety of standpoints, including the rational, fresh approach of the Greens - who long ago matured into much more than a single issue (environment) party. They are all about corporate and individual fair society. I hope for a Labour-Green-Lib Dem coalition, though I wouldn't mind if the SNP had a share, I think they've matured too.

Fresh thinking for 2015! Register to vote online through the .gov.uk website...

Nope. Sorry look better. The man holding the arm of tge woman with the blye scarf in the photo on the video. When it moves to the second photo with no women look for that man. He has a distinct jacket. In the second photo his jacket is unzipped partially revealing some blue (not remnants of her scarf as it is between his unzipped jacket - so even if you said its part of her scard his jacket is still now unzipped where it wasn't before)..

I guess im just better at spot the difference.
Im not saying there wasnt photoshop done but they are not the same picture. Or else they found another picture of that man from that day and plugged him in.
My observation is not only not flawed, it's dead on the money and im apparently the first to see it. When im on the p.c. ill screen shot it and put them beside each other and circle it so you can too.

It's the same picture photoshopped.

You didn't even bother to notice the guy suddenly has the gloved woman's hand.

His jacket is not unzipped at all, just somehow they must have used a blue filter when selecting, which ended up leaving her scarf in the image.

The photoshop edit was a total hack job. You are not better at spotting differences. You are not dead on the money. You are wrong.