The Truth "Behind" The Charlie Hebdo Solidarity Photo-Op

page: 1
52
<<   2  3  4 >>
log in
join
share:
arjunanda
+12 more
posted on Jan, 17 2015 @ 08:21 PM
link
OK Guys and Gals, So The Most Viewed Picture of The Week (Many of The World's Politicians Arm in Arm in Solidarity with The People Against Terrorism) seems like it might just have been a fabricated bit of propaganda, to fool us all into thinking that they may actually be of The People and By The People.

Well according to both French Television and The Independent (UK Newspaper). These fine Politicos actually had this Staged Photo taken on A Side Street under Heavy Security and with only about 12 rows of Bureaucrats and Government Functionaries behind them making it seem like they were Heading a Huge Parade of Hundreds of Thousands of Normal People in A Show of Support for Their Valiant Fight against those who would do The People of The World Harm.

Is this any way to Run A War On Terror? Haven't these Representatives of ours have any Scruples when it comes to A Stunt to get Political Support and Garner More Votes?

So, Watcha Y'All think? Have we been had again? Anything you would like to add to this thread as always is Most Welcome. Have A Good Weekend My ATS Friends and Family. Peace Arjunanda.


Once again the mainstream media peddled the spoon-fed propaganda that world leaders "led the march" to honor the victims of the Paris shootings last week. Glorious photo-ops of Merkel, Hollande, Poroshenko, David Cameron (oh, and not Barack Obama) were smeared across front pages hailing the "unity in outrage." However, as appears to be the case in so many 'events' in the new normal managed thinking in which we live, The Independent reports, French TV has exposed the reality of the 'photo-op' seen-around-the-world: the 'dignitaries' were not in fact "at" the Paris rallies but had the photo taken on an empty guarded side street...

As The Independent reports,

A different perspective on the leader’s portion of the march has emerged in the form of a wide shot displayed on French TV news reports.

It shows that the front line of leaders was followed by just over a dozen rows other dignitaries and officials – after which there was a large security presence maintaining a significant gap with the throngs of other marchers.

The measure was presumably taken for security reasons – but political commentators have suggested that it raises doubts as to whether the leaders were really part of the march at all.

You know what they are afraid of....Dontcha?

posted on Jan, 17 2015 @ 08:27 PM
link
Nice Reply Baddmove, That we might find out they Tell Porky Pies (LIES) LOL. Oh, The shock of it all, My faith hath been Shaken Arjunanda a reply to: baddmove

I learn some new filth about Israel almost every day.

You know what they are afraid of....Dontcha?

originally posted by: hopenotfeariswhatweneed
i will bump this too...very interesting.....and what is with the Israeli paper scrubbing all the females out of the picture...they like faked a fake....just wow


Ultra-orthodox Jews...most Israelis think they're crazy, too.
edit on 17-1-2015 by JohnnyCanuck because: (no reason given)

posted on Jan, 17 2015 @ 11:09 PM
link
You're Right On That Johnny, There are Plenty Of Loony Tunes in All Religions That's why I think of them as essentially Materialist Cults in A Great War to Prove which of them is The Most Peaceful and Closest To God and They'll Kill anyone who disagrees with them! Peace To Y'All Up There In The Great North, Arjunanda a reply to: JohnnyCanuck

posted on Jan, 17 2015 @ 11:36 PM
link
Have a look at the photo in the link provided, notice anything different than the original?

Guess there not big fans of woman in power.


An Israeli newspaper has been criticised for allegedly editing Angela Merkel and other women from a line-up of 40 world leaders, photographed in Paris on Sunday

posted on Jan, 17 2015 @ 11:41 PM
link
Well I am a little confused. You write about the photo being taken on a side street then show a video about Israel cropping women from the photo.

Most here understand media manipulation but this has nothing to do with side streets. None the less, blant slant by Israel, but to what end? Seems anti women to me.

You do realize that OP didn't post the video you questioned. Right?

No and thank you for the correction.

Apology to the OP.

posted on Jan, 18 2015 @ 03:55 AM
link
As usual a nice simple show of solidarity gets turned into a "piece of the puzzle" of the grand conspiracy that controls the lives of the entire planet. Most of you I'll bet don't even know a thing about most of the people who marched.

I know these awful politicians are targets and need protection - people are out to kill them. But if they can't even get SOLIDARITY right, what are they good for? For once in their professional lives, they could have gone out into the crowds of people instead of being cowards.

The irony of them wanting the public (voters) to March Against Terror whilst they won't even take the chance of joining them says so much... 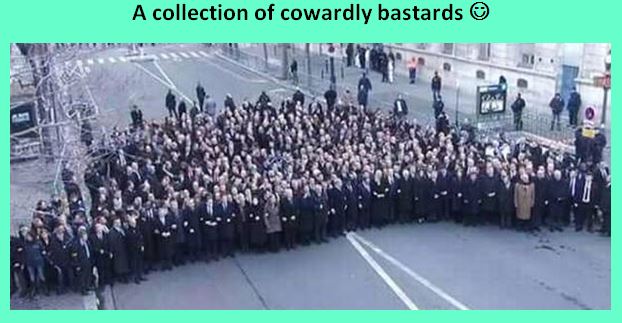 originally posted by: TsukiLunar
As usual a nice simple show of solidarity gets turned into a "piece of the puzzle" of the grand conspiracy that controls the lives of the entire planet. Most of you I'll bet don't even know a thing about most of the people who marched.

I know right?, its almost as though they enjoy posting on A WEBSITE DEDICATED TO CONSPIRACIES.
edit on 18-1-2015 by Dabrazzo because: (no reason given)

No! It can't be true! All this time I've spent here- all for not! I don't think I can continue after that revelation.