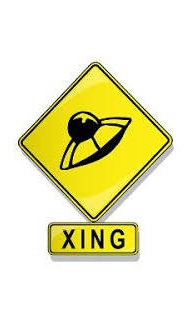 I personally believe our galaxy is filled with life. Only the vastness of space makes life appear rare but as we advance technologically and become more adept with exploring outside of our planet we will find that as travelling extreme distances becomes easier, alien life forms will show themselves more and more frequently. I think that as we spread out into the universe if we remember what exploring Earth was like for our ancestors we could really appreciate what we've got ahead of us.

I also believe that alien cultures for the greater part wouldn't veer too far off of what we are like ourselves. The same basic principles of civilization and physical wellness would apply to any life form anywhere. Perhaps a few rare planets here and there would contain bizarre intelligent life in forms that would repulse us and they would be near-impossible to understand if we tried to get in contact with them. Maybe there's a planet with a semi-liquid-semi-gas nitrogen atmosphere and all living things would be poisonous for us and of a plasmatic sort. As one of my own personal theories goes, if you can imagine it, it can be.

As for galactical travel there are no traffic signs, no rules of the road. Only what reality would limit us to. If traveling from star to star in an inter-dimensional vehicle really is something we can do then the possibilities for exploration of our own galaxy far exceed what we can explore on the surface of this planet. You could go on and on about this. It's only limited to your imagination.

id prob use my winnings .. to set up a holiday home on one of the nearby paradise moons ... and hopefully one of those beautiful alien women with the olive green skin would fall for me or my wealth .. and we could live happilly ever after .. with our life extending technologies that can extend the life of an organism by upto 5 times ... before using other technology to transfer my soul to a younger aged clone of myself ...

well .. either that or id just blow the lot on more alien lottery tickets ...
but my imagination is quite limited in these matters

posted on Jan, 17 2015 @ 09:42 PM
link
I desperately hope I will get to experience the things you describe in my lifetime. Beats whatever I'm doing with my life now...

I like to imagine that there are gigantic intelligent octopus-like creatures with air sacs, floating in the atmospheres of gas giants.

I like to imagine that there are gigantic intelligent octopus-like creatures with air sacs, floating in the atmospheres of gas giants.


You can meet them here.