An anti-Islamic, pro-Israeli lobby group has stirred controversy in San Francisco with a series of provocative ads on 50 buses, with images of Adolf Hitler accompanied by a demand to stop all aid to Islamic countries and an appeal to “stop the hate.”

The ads are the latest effort by the pro-Israel, Houston-based American Freedom Defense Initiative (AFDI) to whip up anti-Muslim sentiment across the US. The group is well-known for its previous Islamophobic advertising campaigns in major US cities.

The ads appeared in the wake of the recent terrorist atrocities in France, where attacks on the offices of satirical magazine Charlie Hebdo and a Jewish supermarket killed 17 people, including two police officers.

The ads on buses operated by Muni, San Francisco’s municipal transportation agency, feature an archive photograph of Hitler talking with a Muslim leader from Palestine in the first half of the 20th century, Haj Mohammed Effendi Amin el-Husseini, who was a prominent Palestinian Arab nationalist and critic of Zionism. 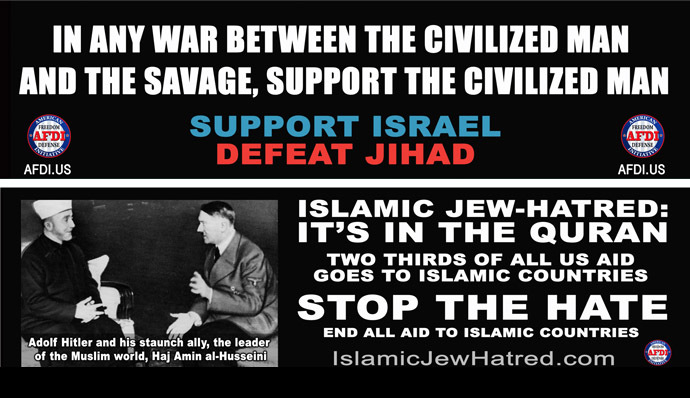 “We understand and apologize that people could be offended by these ads,” Paul Rose, a spokesman for Muni, said Tuesday. “Neither the city nor Muni endorse the content of these negative ads. However, the First Amendment protects freedom of speech, including speech that is considered offensive,” SFGate reported Rose as saying.

@sfmta_muni these ads are hateful and offensive. Please remove them. pic.twitter.com/kFv7mNJF5U

“Refusing placement would almost certainly result in a lawsuit that forces the city to run the ads under court order, and we believe taxpayer dollars should be used to improve transit and the overall transportation network – not on lawsuits,” Rose said.

I thinks its quite disgusting, and bad timing by the AFDI. Never let a good crisis go to waste?

There are 1.6 Billion Muslims in the World, if as we are told Islam breeds terrorism, we'd all be dead by now wouldn't we?

I don't think it would be acceptable to have a similar poster relating to the Zionists that run Israel, despite their ethnic cleansing of the Palestinian region.


But they didn't want him in charge of the Arab League!!!

The propaganda is strong on this one.

The irony of this is that a read through the torah will show you some horrific passages of how jews are to treat the goyim with verses saying its alright to have sex with a goyim baby and that all goyim can be exploited and their businesses taken etc.

I am surprised people haven't read the torah because its an eye-opener about the teachings in that book concerning the relationship between the 'chosen' towards the rest of the world's people. A few of those instructions would make an equally interesting bus advert.

posted on Jan, 16 2015 @ 05:27 PM
link
Some people believe they are personally in war. And the first thing you do when you go to war is clearly define your enemy. It appears to me this group is trying to persuade others that Jihadists are the enemy. This is still protected under the first amendment.
edit on 16-1-2015 by newWorldSamurai because: clarification

The irony of this is that a read through the torah will show you some horrific passages of how jews are to treat the goyim with verses saying its alright to have sex with a goyim baby and that all goyim can be exploited and their businesses taken etc.

a reply to: Shiloh7

Please show the verses in the Torah (Five books of Moses) where these instructions are given.

On topic, the truth hurts. Hitler was a friend and ally to the Muslims. Both parties have/had the same goal; the extermination of the Jew.

I remember reading somewhere Hitler also did it to gain support of the Bosnian Muslims who joined his forces.

There are 1.6 Billion Muslims in the World, if as we are told Islam breeds terrorism, we'd all be dead by now wouldn't we?


You watched The Last Leg tonight too?

Hitler was an ally of Al Husseini...
The man in the picture...


The same man that failed Palestine as the Grand Mufti, ran to Germany & was a massive influence in the Exodus of Palestinians who were kicked out of Palestine illegally...

The PLO left him to rot and he died as an outcast in Shia Lebanon despite being a "Sunni"...

He was also a Soldier of the Ottomans who were all about Conquering anywhere they could...

All because of Al Husseini...


He sold Muslims down the river because of his hatred for Jews...

Brainwashed a lot of people with the same propaganda as Hitler...

They can both rot...

& still Israel is a terrorist nation...

They can't disguise their Genocide and Supremacy with 80 year old propaganda and they're getting desperate!
edit on 16-1-2015 by CharlieSpeirs because: (no reason given)

I find the ads to be misinformation. The Nazis were not true allies of any nation or people whose majority demographic was not Caucasian. It is that simple. They may have had aims which were somewhat similar in some limited respect, but the fact is that the Nazis had an extermination protocol for anyone who was less than "perfect" in their deluded eyes, and the fellow featured in the advert, across from Adolf "total bastard" Hitler there, would not have fit the bill.

You would expect the Israelis to know that, and to know better than to use propaganda attacks like these to suggest that all Muslims, and all Muslim nations, are to be treated differently because of the majority religion in those nations. Frankly, I find the advertisement to be a raised middle finger to the memories of all the allied service men who fought the Nazi regime and liberated the Jews and others from the camps. The issuers of this advertisement, in doing what they have done, and in generalising as they have, which is the root form of xenophobia and must not be tolerated in any form, have become more akin to the Reich than the people they are trying to negatively effect.

I for one find it absolutely ghastly, and if anyone should know better, it is the Israelis. Frankly, this advertisement is nothing to do with Jews and Muslims. This advertisement is about promoting the aims of the Israeli government, whose treatment of their neighbours, even despite their precarious tactical position, has been utterly appalling, and increasingly brutal over recent years. I have no problem with Jews, but the ruling elite of Israel? I would not spit on them if they were on fire, because it would be more effort than the murderous bastards are worth.

These are the types of Jews & Christians that the Quran was talking about...


Not the regular Church & Synagogue goers...

People like these two disgusting propagandists are the kind that incite hatred that leads to violence...

Their propaganda is equivalent to that of Hitler & Al Husseini...

I'm not surprised they used those two in their propaganda...

posted on Jan, 16 2015 @ 06:17 PM
link
Geller? Not exactly a big shock. Does somebody want to build a new community center there or something? Remember her similar campaign against the mosque in NYC? Haters gotta hate.

originally posted by: CharlieSpeirs
I should have known this was all the work of Pamela Geller & Robert Spencer!

These are the types of Jews & Christians that the Quran was talking about...


Not the regular Church & Synagogue goers...

People like these two disgusting propagandists are the kind that incite hatred that leads to violence...

Their propaganda is equivalent to that of Hitler & Al Husseini...

I'm not surprised they used those two in their propaganda...

Because I'm sure if they had the power & funding of the two they highlighted they'd attempt to genocide the Muslim Ummah in a flash!

I just read about a Muslim comedian in Canada that decided to test the "freedom of speech" and he "twittered" a bunch of tasteless anti Jewish tweets and he is now under investigation.

As much as I hate ignorance, if we scream for governments to protect our minds from insults, well, we end up with the Orwellian nightmare we all are suffering with now?

But we do feel safe right? /sarcasm

I think it has to be said, that this is an age where few of the publicly recognised representatives of the faiths involved in the current tensions in the world, have any ability or intention of behaving reasonably toward one another. CharlieSpeirs, it brings me great joy that I as a Christian, and you as a Muslim, can sit here in this thread, and reason together upon topics like these, and have similar reactions to them as people. It gives me a little ray of hope, in amongst the clouds of xenophobic profanity which wash through topics like these in broader society.

I am however, appalled on behalf of Christendom, that any person professing to believe in Christ would get behind a project such as this, let alone a person who claims an affiliation with one of the oldest Christian sects on the planet. Though it is not my job, I feel I must apologise. Is it not a horrid thing to feel like one has to apologise for the failings of ones fellows?

This is what she is capable of doing with her hatred & vitriol people!!!

I see the Islamophobe Apologists are dodging the thread... That pleases me!