Did Switzerland let the Euro die?

The Swiss central bank stunned global markets on Thursday by abandoning a crucial part of its three-year effort to hold down the value of its national currency against the ever-weakening euro.

The country had been trying to cap the value of its currency, the franc, as nervous investors fled the market tumult and sought the relative safety of Switzerland. But in the face of a steep decline in the euro, the plan proved too risky and too costly to continue.

The abrupt move sent the value of the Swiss franc soaring, as the country’s stocks broadly plummeted. Exporters, in particular, got slammed, over fears that the rising currency would weigh on profit. 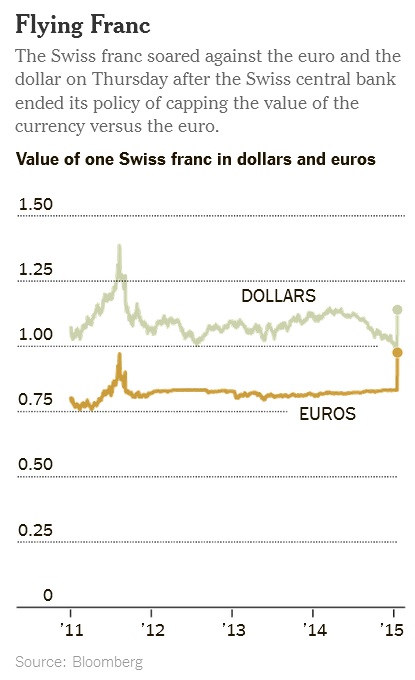 “We can only guess at what was in their minds,” Carl Weinberg, chief global economist at High Frequency Economics, said of the Swiss central bank’s move. “Maybe they are afraid that the euro is coming on some hard times, and they didn’t want to be tied to a sinking ship.”

The Swiss made all they could to keep the euro lower than 1.20 francs since 2011, meaning they buy you all the Euros you wanted to sell, a month ago they said they would still maintain the policy, but as Euro keep falling and Swiss fear European central bank will start printing money soon they ditch their effort and removed the cap of 1.20, fearing they will be flooded by euros, that, if the European union fails, would be worthless. so to protect themselves of an euro collapse they risk deflation.

Having a very strong currency means their exports are prohibit to other countries, and as the franc raised 15% vs Euro and $, their bonds and companies stock collapsed today (Nestle is down 6%, Swatch 16%).

If Switzerland is ready to give themselves a blow to ditch the euro, it seems to me they see an imminent collapse of the euro zone, after all they made their move 3 days before Greece elections.

posted on Jan, 15 2015 @ 05:00 PM
link
I bought a ton of swiss francs last week, simply cause I think there notes look cool lol. HAPPY DAYS. Couple of nights out on the piss paid for anyway lol. Crazy money wizzards.

posted on Jan, 15 2015 @ 05:13 PM
link
The Euro was a real no goer from the start, so to blame the Swiss for this is a bit rich really. Are they not merely protecting their own interests?

Sure, it's great for the tourists, no trips to the cambio de change to worry about, but the standard of living for the citizens living in the countries reliant on tourism have been sacrificed.

posted on Jan, 15 2015 @ 07:10 PM
link
The timing of this Swiss move just before the Greek election is telling. I believe they wanted to cut off the flow of Euro before the Greek decision as they could have been swamped with Euro in hours if Greece moves to the far right.

I've seen predictions of the Euro reaching parity with the US $....so there is still room to fall it seems.

Abrupt move of 30% in 10 minutes just showing how leveraged is all Forex Ponzi trades.


As Directors and Shareholders we would like to offer our sincerest apologies for this devastating turn of events, and to thank you for being such a supportive group.


Also answering all those "trash Euro" comments. It is not so important if Euro will trade on parity with US dollar or even below dollar.
The big question what will happen if China decides to do something similar to what Swiss Central Bank have done now.
What will be Yuan/Dollar/Euro rates if China decides to unpeg Yuan ? Swiss economy is relatively small and besides being historically "safe haven" is not that important tbh.
edit on 16-1-2015 by kitzik because: (no reason given)

they avoided losing billions more... when a southern nation removes itself from the EU, and when the Northern Euro gets born in competition to the defunct €...

If this info would be leaked semi officially this would made more inside traders aware of upcoming decision. IMHO, Switzerland did informed IMF, those are almost the same banker elites that running all fiat currencies Ponzi shows.

What was interesting is to see how overstretched are small speculators playing on high margins and quickly going in red. It is also interesting to note how detached are Central Banks moves from normal common sense raising negative interest rates from -0.25% to -0.75%
edit on 16-1-2015 by kitzik because: (no reason given)