What are these off the coast of Bahrain?

So, about 15 or so years ago, I read my first Zechariah Sitchin book, "The 12th Planet," and proceeded to read the rest in his series. I since know that much of his claims are crap, but it got me into looking around on Google Earth (about 10 years ago) to look for intriguing, undiscovered things that may lie in view in the areas that were discussed in his book.

One such place is Dilmun. When I typed that in to GE, it took me to the island of Bahrain. I didn't see anything exciting as I was poking around, but then I decided to look off the coastlines to see anything that looked man-made, but that I could not explain.

I came across these, which are off the coast of Jannusan, Barbar, or Jid al Haj: 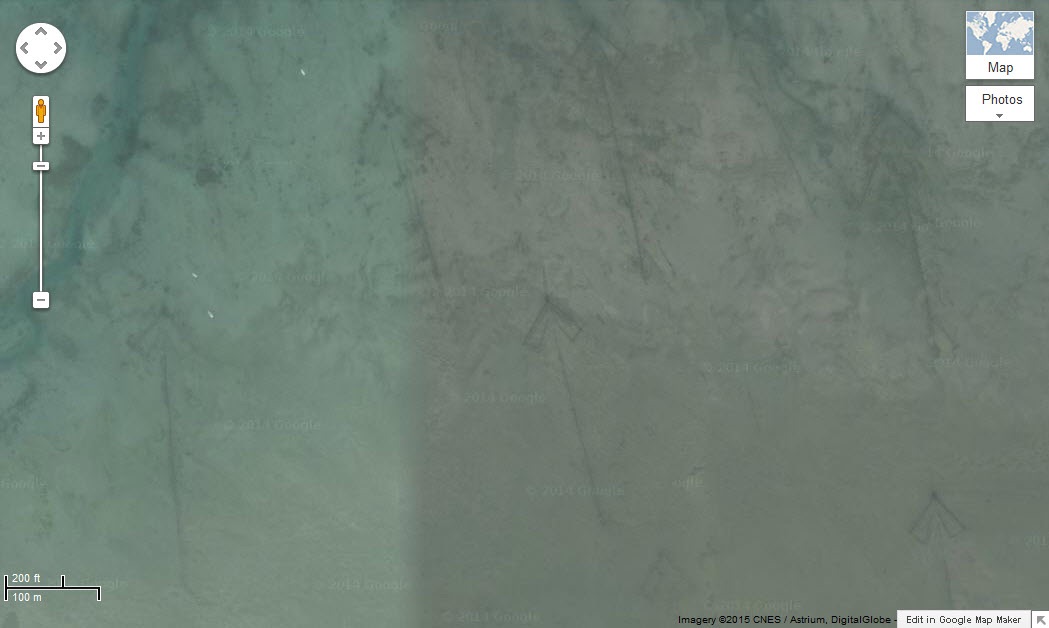 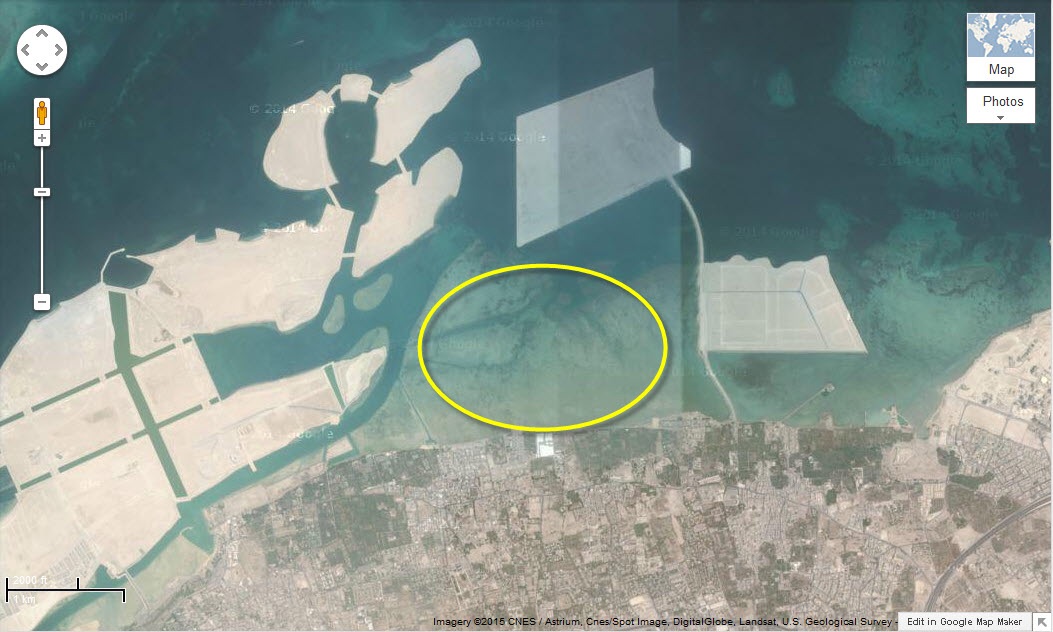 What I'm pointing out are the odd arrow-looking things that are pointing relatively to the north. I posted this on a site a decade ago, but no one commented on it and I forgot about/lost interest until I remembered them a few months ago.

Sadly, it appears that the penchant for creating man-made islands in that area of the world is encroaching on them, and already some of them are lost to this construction, as they exist(ed) all along that section of coastline and not just in the encircled area of the second image. In fact, they also exist farther out into the ocean, if they're still visible in Google Earth/Maps.

Do these look like some sort of ancient animal pens, or animal traps, or fishing traps, or anything that you can pinpoint? I've looked at them over and over, and they don't appear to be any sort of drainage lines from on land (especially if they're covering over them with islands) or sewage pipes or...well, anything that I can figure out.

Will one of you solve this mystery that I've been holding onto for about the past 10 years? I'm stumped...but they obviously appear designed and created by human hands at some point in history.

Also, I have not found any other examples of this off the coastline of any other cities in this area...only in this particular one.

Here is a detail of one of them as seen from Bing's imagery, this is from the area to the right of the rectangular island on the right side of the yellow ellipse: 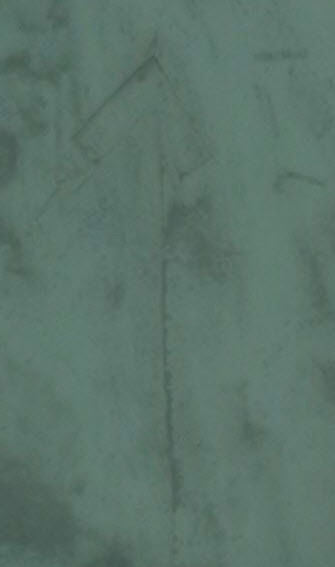 Hopefully they interest you as much as me, as it seems that they may be covered up, soon. Any ideas or thoughts on this would be greatly appreciated.

They look like arrows all pointing the same direction, don't they?

For whom though, and why so many?

Under sea pipelines and berths for tankers?

That's probably my thing that I posted a long time ago...was the site called Google Earth Hacks? If I recall, that's the file type that it had to be saved in...or something.

ETA: Yes, a .kmz file extension is a Google Earth placemark file, so I bet you're looking at my original posting of this area.
edit on 15-1-2015 by SlapMonkey because: (no reason given)

Exactly. I wasn't sure if I could link it or not since it's a download file. Spoke of arrows off the north coast of Bahrain (Dilmun).

Well, at least you proved my story wasn't a bunch of crap, so there's that, at least

Common way of fishing in many parts of the world.

Other than that i have no idea...

The thought had occured to me before, that maybe they were areas to anchor off ships of some sort, but every time I've seen the satelite imagery of this place, there never has been a boat at all, so I wouldn't think that was it, especially since the area has grown immensely in the past decade--you'd think they'd be being used by now, if that's what they were.

This is one of the old markers used to guide Airplane pilots before GPS. It points in the direction of the route they need to take. Since there are multiple ones it suggests this was for a bigger company or organization due to amount of labor involved in putting the arrows there. Maybe military? There has been a thread about this before.

posted on Jan, 15 2015 @ 02:24 PM
link
Congrats for finding another unsolved mystery for us to ponder. I do hope someone can come up with an explanation for the arrows. If the land sunk or was flooded by sea rise many years ago, they would have been on dry land and the question is then, just as in the Nazca lines, to what did they point?

Yep. 100% fish traps. For anyone who needs confirmation, Google image search "pound net" and see for yourself. 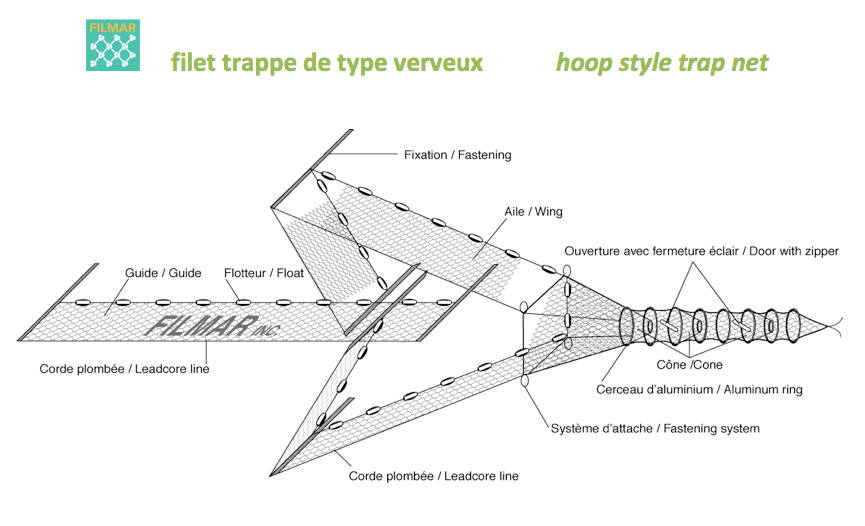 originally posted by: theantediluvian
a reply to: Mianeye
Yep. 100% fish traps. For anyone who needs confirmation, Google image search "pound net" and see for yourself.

Ah...certainly seems to be the answer. I guess you just need to know the terminology for which to search. This would explain, I guess, why they don't seem very exact in their construction.

Althouh, I'm not sure if any are visible anymore, but when I first found these things, some appeared to be partially buried or covered over by more than just beach sand...more like by the darker stuff in that area that appears to be rocks. Some also seemed partially buried by the sand. I don't know if that's a testament to the age of them or not, but it just doesn't seem logical that they'd be exactly the same 10 years later if they were, what seem to potentially be, temporary methods of catching fish.

Are these more permanent than I suspect? Seems like they'd lose their effectiveness if left in the same spot for decades. Or, maybe they were just abandoned 20 years ago and haven't washed away.

Pity, sort of, if this is the answer. I was hoping for something more intriguing :/

posted on Jan, 15 2015 @ 03:42 PM
link
My two cents, when I traveled there back in the 80's and 90's the locals told me that they were, indeed, fish traps. They are quit visible, and somewhat astonishing, when coming in for a landing in Manama.

posted on Jan, 15 2015 @ 06:13 PM
link
I'm sure theantediluvian showed us just what these are. I've been through Bahrain and can tell you that very little of any natural harbor still exists, it is heavily built up between the city, oil exploration and shipping and constant dredging - in fact they build a lot of artificial islands off their coast partly as it is one of the easiest ways to dispose of the dredging (highly toxic dredging too I might add).