However the recent banning on 'pig' connotation words seems too extreme and rather illogical. Pigs are animals and they exist, some people eat them, some don't, but they do exist and cannot be airbrushed out of reality.

People eat 'sausage' products but even those can be meat free, vegan or kosher.

Are pigs going to be mentioned in zoology books?

How about those that do eat bacon etc, is stigmatising pigs and the food that is consumed from them not offensive to those that do? The people of the west have been eating pigs since there were wild boar in the woods since before 10000BC.

There is a popular childrens show called Peppa Pig, is that going to be referred to as Peppa ***, how will articles on Medieval banqueting refer to the Tudor inclination for eating pigs? ''Henry VIII was known to have a fondness for ***, as **** was considered the healthiest meat to eat to the Tudors'' etc.

When certain factions have shown that their values are very offensive to most others, should it not be imperative that they are made aware of their own lack of morals instead of appeasement in the form of banishing words and animals from literature.

The Oxford University Press has warned its writers not to mention pigs, sausages or pork-related words in children's books, in an apparent bid to avoid offending Jews and Muslims.

The existence of the publisher's guidelines emerged after a radio discussion on free speech in the wake of the Paris attacks.

edit on 14-1-2015 by theabsolutetruth because: (no reason given)
edit on Wed Jan 14 2015 by DontTreadOnMe because: snipped overly long quote IMPORTANT: Using Content From Other Websites on ATS

Or what to do with a popular Palestinian Islamic organization named H**as?

This is an endless loop.

It seems to me that the police would be more offended by pork and swine connotations than Muslims.

posted on Jan, 14 2015 @ 06:22 PM
link
Those in India see the cow as "holy" those in Islam see pigs as dirty. Well pigs are dirty but tastes great and cows are only holy if you mean "hole"ly assuming, however, you think the spots are holes. Beyond that, simply rubbish and poppycock. If you think otherwise, well, I don't know, trying to evolve might help.

originally posted by: xuenchen
What about a *****, lettuce and tomato sandwich?

Or what to do with a popular Palestinian Islamic organization named H**as?

This is an endless loop.

Sometimes you are just too awesome for your own good.

Why does the big bad mamma pajama ISIS use such an acronym and not something more akin to their religion. Like A.L.L.A.H. or something, I mean surely they're cleaver enough.

One wonders what the Muslim-friendly version of The Three Little ***s looks like.

This is worse than when they "sanitized" Huck Finn.

I'm offended on behalf of the pigs. Pigs are nice animals. Smart. They don't hurt anybody. It's an insult to pigs to be compared to humans who are so thin skinned they will somehow be offended by the mention of their name.

I'm going to get a pig and name it Voldemort.

Our cultures are going to become extremely bland and boring after we've censored everything to avoid offending anyone.

originally posted by: Jamie1
I'm going to get a pig and name it Voldemort.

And I am going to rename him Dinner.


It's an insult to pigs to be compared to humans who are so thin skinned they will somehow be offended by the mention of their name.

These pigs are very sensitive too then. 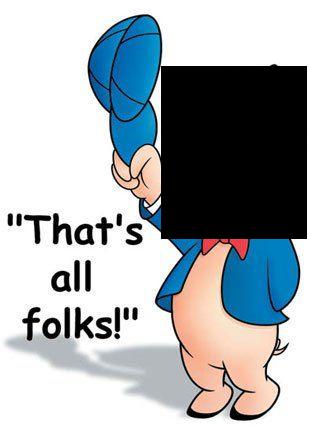 I blocked his face out to avoid offending anyone

1 billion Muslims in the world are now aware that Oxford Press takes their religion seriously.

You can't buy this kind of exposure.

So people are starting to use lacklustre precognitive abilities to say what we will find offensive now...
That's the agenda...
Claim we'll be offended so others will blame us for their idiotic PC behaviour...


Damn, I've only gone and offended myself....

It's called the three little infidels & the big bad caliph...

posted on Jan, 14 2015 @ 06:44 PM
link
So then, wildly politically incorrectly speaking, I can't pork a pig with my pork sword? really? Thank his almighty that that option is off the table...finally...moving on.

Even a staunch Muslim will be laughing at this I hope.
edit on 14-1-2015 by Jonjonj because: (no reason given)

posted on Jan, 14 2015 @ 06:44 PM
link
This is getting ridiculous.. 1) since when has getting offended become the single worst thing that can happen to someone? If I could go through life and only had to deal with the occasional offense, pffft..

2) the whole hug a Muslim mentality that society is adopting is nauseous. So, every religion except Islam is fair game.. I'm a Christian and the amount of offensive material concerning my saviour Jesus thats out there .. please.. from cartoons to so called modern art is offensive to me.. I don't call the MSM or write a congressman.. I pray..

What I've taken from all this is , if you want your beliefs taken seriously.. you get young naive impressionable men and strap bombs to them..

Seriously, no one would give Islam a second thought if it wasn't for fear of reprisals via terrorism..

Sorry for the rant.. it just seemed like every other thread, website and MSM that I've seen today is about giving concessions to the Muslims..