page: 1
55
<<   2  3  4 >>
log in
join
share:
SkepticOverlord
+15 more
posted on Jan, 13 2015 @ 10:27 AM
link
London-based extremist Cleric (and suspected MI5 asset), Anjem Choudary, who often advocates violence against the west, has said the new Charlie Hebdo cover depicting a teary-eyed Prophet Mohammed as "extremely serious" and an "act of war." He added that the cartoon cover is "attack the honor of the Prophet," and if tried in Sharia court, would bring the verdict of capital punishment. Choudary continued, calling the cover a "blatant provocation" and part of an ongoing war against Muslims and Islam.

Most have already seen it, but here's the new cover... 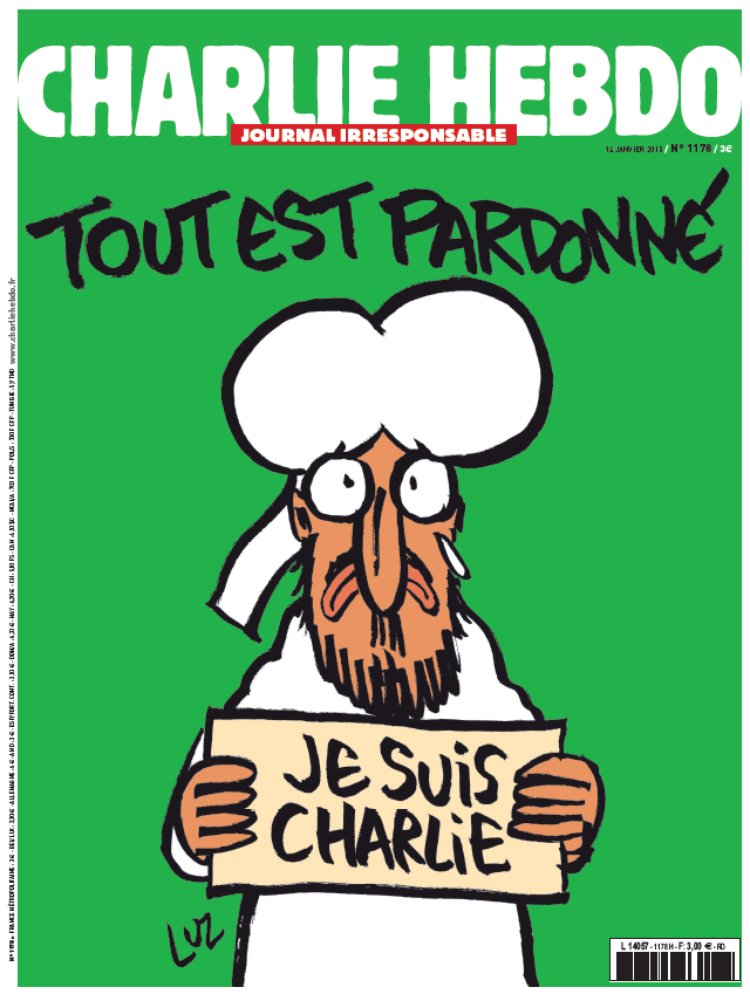 Anjem Choudary was arrested four months ago as part of UK counter-terrorism investigations, but later let out on bail. He founded the al-Muhajiroun network, classified by the west as a terrorist organization.

Knowing his background and influence in the extremist circles, many are concerned that more attacks are on the horizon.

ATS… what do you think? Is the west taking the typical opportunist approach and seizing the opportunity to trade liberties for freedom. Or do the rumors of a potential False Flag have merit -- where western governments needed a new excuse to increase police state operations.
edit on 13-1-2015 by SkepticOverlord because: (no reason given)

I don't think Charlie Hebdo really had much of an option. They either had to give in to terrorism and not print the magazine or they print it up with Mohammed on the cover and show extremist Islam that their BS doesn't work. All it did is cause solidarity in the community.

I know how offensive depictions of Mohammed are to all Muslims but I think they should just roll with the punches so to speak, just to show that not all Muslims support extremist behavior and that tolerance, even of those things that offend you, is always an option. A better one than violence.
edit on Cam10Tuesday3820151431Tue, 13 Jan 2015 10:38:14 -06002015 by CagliostroTheGreat because: cannot abide a typo

originally posted by: SkepticOverlord
He added that the cartoon cover is "attack the honor of the Prophet," and if tried in Sharia court, would bring the verdict of capital punishment

Which is fantastic, if you happen to have this happen in a country that has Sharia law as it's main governing platform. Since France is not under Sharia Law, the best this dude can do is whine a bit.-

I am not religious, but do believe in God and it OFFENDS me when people talk about killing others for not believing the same as they do. Now that this is out in the open, I think some might call this a stalemate. I'll go on being offended and this dude can do the same.

I think people like him come along every decade or so with some sort of Mahdi-Complex...
He hasn't stated as much, but it wouldn't surprised me if he had those feelings.


Is there an article that relates to the cover, or a statement from Hebdo saying that's definitely Muhammad...

I just see a Muslim to be honest.

& all that bulls# aside, I believe Muhammad would be tearful at the acts being committed by people claiming his & Allahs name.

It #ing breaks my heart, I can't imagine how Muhammad would be feeling.

Sure… but then why even give Anjem Choudary ink on paper or bits on websites? He's a known terrorist leader, given legitimacy by western media covering his comments. To me, this type of media hype only adds incremental credibility to the speculation that the attacks were some kind of false flag pretext.

The media did exactly the same with Abu Hamza until he became a problem for our cousins across the water...


Will you take Choudary as well, please Skeptic

As to why they give this fool a soapbox to spout his hate addled intolerance? Damn good question. It certainly seems fishy. Personally, I don't want to believe this is a false flag but I just don't know.

There is a lot going on here and not all of it seems legit. People died, I don't discount that but what was the real reason they died?

With the 'hack' yesterday of CENTCOM's twitter, along with this kind of connecting the dots, lead me to believe there is indeed some kind of false flag event on the horizon.

I think it will include, most certainly something regarding the internet, that will prompt a Patriot Act type legislation against internet freedoms.

I'm guessing a power grid or something equally as important will be the target. Maybe even air traffic control centers or something like that.

Just spit ballin' here, but yeah. Something is most certainly strange.

posted on Jan, 13 2015 @ 10:50 AM
link
They should toss this hate mongering nutcase back into prison before he starts getting people killed. And while he is in prison give a Qur'an and make him read it because he really doesn't seem to know it that well. The reason why I say this because if he did know the Qur'an then he would know that Mohammed himself said “If you kill one life, it’s like you kill the whole of humanity. When you save one life, it’s like you save the whole of humanity”. So any real Muslim including Mohammed would weep for those that died that day.

posted on Jan, 13 2015 @ 10:51 AM
link
The reason I injected the potential False Flag issue into this discussion is because Anjem Choudary has long been suspect of being an Mi5 asset, in the same way Osama Bin Laden was a CIA asset.

Time for an Honest Conversation


I believe any reasonable person would draw from some of the credible evidences from documents in the public domain that Omar Bakri, Anjem Choudary and many of their friends may be working for MI5 and MI6. They have been supplying information and in return have been left to roam free without prosecution. This is the elephant in the room that no one talks about! Why else would our government turning a blind eye to these hate preachers?

Certainly wouldn't surprise me one bit. "Intelligence Agencies" are a cancer among our governments in my opinion.

posted on Jan, 13 2015 @ 10:55 AM
link
Im saddened, and if im honest, a bit embarrased, that my country, (the UK) have chosen not to show this image in their mainstream media. I thought we as a country had a bit bigger kahoonas than this.

No matter how much you try to understand the reasons behind this; you cant deny, its not freedom of speech.
edit on 13/1/15 by HumanPLC because: (no reason given)

I always smell a rat within the british government where men like anjem choudafry are concerned because this bloke is out on bail - he is not fit to walk the streets of london and should be locked up for what he ways. According this nut everyone who has paid taxes to the UK government will be beheaded as they have supported wars on muslims. So basically all the westerners will be killed leaving west4ern countries all nicely set up for muslims to take over and that is a fundamental law for amy muslim to follow.

I just wonder if our governement in their ivory towers understand this threat because its ok for jappy little clappy mujslims of love to grim and smile etc etc but as a basic law of islam this is what they will do when they have enough people to take over.

I think both the west and the usa is in grave danger of dismissing islam by not knowing enough about what it is teaching muslims and they are all quietly accepting.

As far as choudary's teaching about respecting the prophet, any man who takes for sex an 8 year old bride is disgusting, oversexed and should, as a many of god known better than to have intercourse with a little girl not menustrating and entitled to enjoy her childhood unmolested by dirty old men. Hope that suits choudary's views as its mine and it won't be changing - no respect for a man who has no honour. Strange how many of these religious men seem to starve themselves and go mad and then come down from their starvation cave spouting about a god they have met and been instructed by. Surely when muslims hear this background and think about their own daughters they should think something is not quite right.

Its such a huge gap between ideologies and morals that it can't be breached without: either acceptance of mohammad's sexual deviant behaviour or acceptance that a religion that has turned toxic has to be radically changed to be allowed to exist outside of islamic countries.

If you control not only religious thinking but also the politics of a country you are a dictatorship.

We live in the West which are not societies with Islamic law and rules. From that point of view, depicting Mohammed is not "insulting" anyone BUT those *who live in our society as guests* or those who CHOSE to live in our, western society as opposed to their Islamic home lands.

When you CHOSE to live in a society, you have to tolerate and accept their rules rather than demanding that your rules and your morale etc. is imposed on the society where you chose to live.

The Muslims who feel offended by whatever the West does which is supposed to go "against Islam" are welcome to live in their Islamic countries where those rules are strictly obeyed. There they won't have the problem that their faith is insulted or people live in ways they do not agree with, as simple as that. If people think it's so "difficult" to live here that things that happen in our society justify to kill 12 people...well get a plane ticket to the Middle East.

That utter clown choudhary thinks it's an "act of war"? Tell that to the families of those poor souls killed in Paris last week and the numerous other people affected. I am betting that they already believe that there is a war going on.

Choudhary is a loud mouthed, cowardly, inbred little weasel who still lives in the middle ages. What a clown.

Edit - apologies to any clowns reading this.

Freedom of expression also has the other side of the coin, the freedom not to express just because everyone else is.


Only one involves threats of death for certain, but it's still a matter of freedom not to show it.
edit on 13-1-2015 by CharlieSpeirs because: (no reason given)

I know our government works in very perverse ways sometimes but to let this man teach this rubbish is simply too dangerous, especially to young kids. I don't see how cameron could work with him under any circumstances.

Hmmm i can see your logic a bit but its relevant news and therfore worthy of publishing. Much better to publish and allow people to exercise their own freedoms and choose whether they want to buy/view it.