Looking for a good quality knife for the collection.

I'm hoping to get a little advice from the crew here because im trying to get a Dual-Action Scale-Release Auto... Ive seen a few and always thought they were cool.

But it turns out there arent many to choose from.

and when i find one that looks great (benchmade 7505, or protech defiance) they are all SOLD OUT.

ive wanted one of these since the Microtech LCC. (dang i almost ebayed one and said nah... it'll still be there later)

i dont want to put a 30 dollar knock off on the shelf, i want a quality scale release auto...

these are at least buyable...

also available is the HK Scorch.

I feel like i might be missing a brandname or a knifemaker or a good website... It just seems that there should be more choices in this category. or maybe im wrong and the market for these is small.

advice is welcomed before i make a purchase, and THANKS!!

You want to purchase a knife? I wonder how many nsa flags just got triggered

omg i didnt even think about that crap

ok kill this thread if you gotta.

im not a weapons collector, but i do appreciate a nice knife.

I remember the microtech LCC, damn good looking knife. I wanted one back in the day but couldn't justify the cost. Wish I would have bought several now lol. Kinda like I wish I woulda bought a hemi 'cuda

I have a bunch of decent knives, nothing too fancy exept for my two Emerson's.

Have a few autos but nothing heavy duty

posted on Jan, 11 2015 @ 08:56 PM
link
If you get one with really good steel and sharpen it real sharp, it can cut the tip of your thumb off like cutting through butter. Make sure you have insurance to cover the doctors visit. antibiotics, and tetanus shot.

Check out the Cutlery Shoppe.

I carry a Cold Steel Voyager tanto folder that I've had about 8 years. Excellent blade.

For a fixed I have a Blackjack Anaconda. The convex edge is hella sharp. Dis-continued but you my get lucky and find some nos out there.

Both are reasonable priced and of superior quality.

posted on Jan, 11 2015 @ 09:52 PM
link
I must recommend my Friend Mr. Ken Onion as a knife maker extraordinaire. His 'Speed Safe' deployment was defended successfully in Hawaii to be legally carried in one of the more restrictive sates in the country. His knives are highly sought after and can cost a bit however the old adage that 'you get what you pay for' applies.

There are also some japanese knife makers that are decent as well if that is more your style:

I hope this gives you an idea of what is out there other than Chinese made knives with a cool name….

posted on Jan, 11 2015 @ 11:37 PM
link
No idea what type of knife you are searching, since I do not know the English terms, but I can recommend any knife from Herbertz, CRKT, Gerber or Böker.
No idea if the companie are internationally known, but here in Germany they the best brands.

Edit: maybe check out the Walther Black Tac as well, I always wanted to buy one. I am not sure about the quality though
edit on 11-1-2015 by aLLeKs because: (no reason given)

posted on Jan, 11 2015 @ 11:46 PM
link
I always prefer a thicker blade like the SOG Tomcat myself autos are fun but a spear tipped stilletto will ALWAYS be my favorite.
edit on 12-1-2015 by cavtrooper7 because: (no reason given)


Get a sword and wear it around at the mall and see what happens next.

i was a scout, when young, i've done some carving, and now i work with knives daily as a high-end waiter. i do a lot of food prep in the kitchen and also work food tableside. a knife can do just what you said if used poorly FO SHO...

but you know what REALLY DID cut off the tip of my finger?

they sewed it back on, looks kinda ZOMBIFIED tho (LOL)

i really want one of these...

perfect but pricey...
actually thats the even more pricey even more limited one...
the one i want is the "regular" still too high at almost 600


i might buy a valloton converted boker epicenter.... titanium for the win. dave linked a pic above

yeah that knife is about perfect yes? titanium framed scale release and i think the clip reverses?

i may have a winner here, still reading tho,

LOTS OF GOOD HELP SO FAR THANKS GUYS!

and in my state i cant use the super-cool scale release auto for EDC so that TOMCAT really is more practical.

the downside to putting a nice auto in your collection is that its NOT in your pocket everyday...

i was just at SOG, that call the tomcat a TANK that can turn on a dime.

do you feel safe prying with it if you had to? or is that just an obvious YES?...

benchmade would be worth doing a little work to find. they made excellent knives.

i can also recommend strider knives. they are up there with benchmade. very high quality stuff.

those are the two brands i would recommend for a high quality folder. that is, if you have the budget. there a decent knives for less but, the quality does drop recognizably.


fixed blade is another thread all together...heh

posted on Jan, 12 2015 @ 09:35 AM
link
I know its not your question, but I would heavily suggest a folding knife with a thumb stud instead, because it opens just as fast but is not illegal anywhere, and there is no mechanism to go wrong. 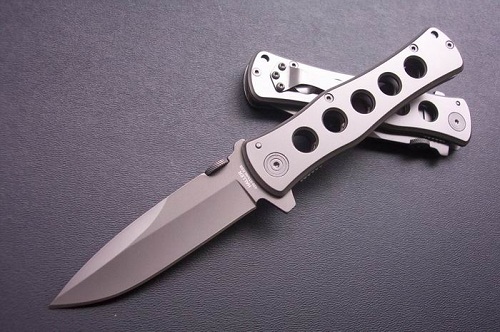 originally posted by: notmyrealname
I must recommend my Friend Mr. Ken Onion as a knife maker extraordinaire. His 'Speed Safe' deployment was defended successfully in Hawaii to be legally carried in one of the more restrictive sates in the country. His knives are highly sought after and can cost a bit however the old adage that 'you get what you pay for' applies.

There are also some japanese knife makers that are decent as well if that is more your style:

I hope this gives you an idea of what is out there other than Chinese made knives with a cool name….

Onion has been a long time buddy of mine as well, and while his custom knives are out of reach for most, his speedsafe mechanism is in almost every Kershaw folder made.

I would definitely say take a look at the kershaw's with speedsafe....there is surely one that fits what you are looking for.

If you can afford a custom, those are really the way to go. I have been collecting custom knives for years. If you are near Atlanta, the Blade Show (largest knife show) hits here every year and you can always find a good deal on a production or custom knife there.

Been carrying one for years. Can't go wrong with them.

I abused the hell out of one at Ft Hood. Naturally you should figutre out the strength of any blade before you try something but that Tom cat was made of good steel I always recommend them when asked.
AND autos are illegal to carry anyway.