Why is the word 'terrorist' in quotes?

That's Yahoo's headline for the terror attack in Paris here.

Anybody understand the grammatical reason to highlight certain words in quotes? It's used when the author doesn't agree with the characterization of that word.

Ex: My husband was "working late" last night. Get it? 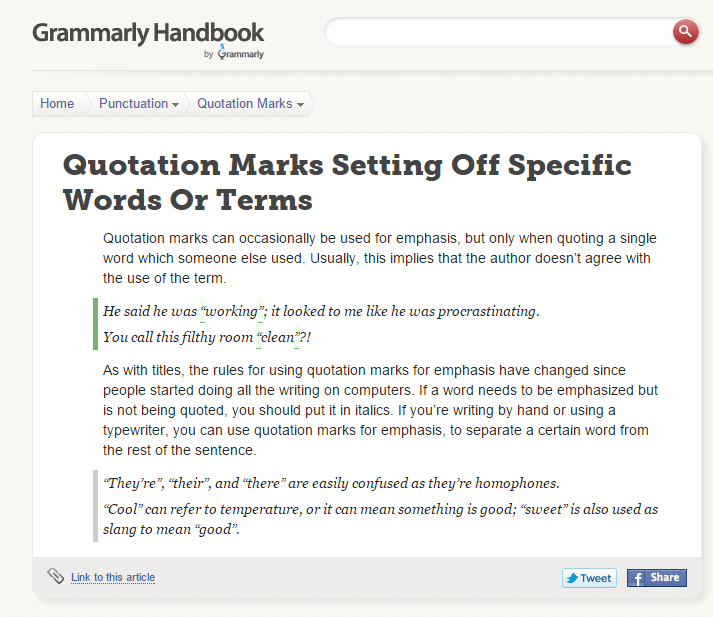 Be aware of the microaggression in the media as they begin the narrative that the killers were justified in being "offended" and the the victims got what they deserved for saying things that might "offend" the killers.
edit on 7-1-2015 by Jamie1 because: (no reason given)

It's obvious there are sympathizers and apologists everywhere.
Hell, spend a day at ATS and that fact is gleaned rather quickly....

It's possible it was orchestrated by a a couple of discontented Frenchmen who wish to foment anti-Muslim anger within France as well. We just don't know yet.

posted on Jan, 7 2015 @ 10:59 AM
link
My guess would be that since they have not been caught yet, and no other information is known about them, that they can't technically be labelled as terrorists in some sense. Though, I also guess it would depend on the meaning of terrorist to the news outlet.....such as if the word terrorist infers Islamic Extremist, or just someone trying to create terror in general.

Well, given that the place was firebombed in 2013 and was atop the "top ten" list that Al' Queda put out as "targets"....Imma personally go with occam's razor here.

...but that's obviously just my opinion.

I think you are right here. It's probably a journalistic/legal rule to do that when it hasn't been proven yet. Sort of like when they say "allegedly" when a person has killed someone but hasn't gone to trial yet.

Someone (who? can we trust this person?) said they heard (how close were they?) the attackers shouting something about "avenging the Prophet" (even if this is all true, how do we know it's not a way of trying to make people turn against Muslims?).

That said, I have no doubt it my mind that they were terrorists and it should be stated so, without quotes. The problem is that our society sadly associates terrorist = Muslim, which is so damn wrong. Any person can terrorise others, regardless of their religious beliefs.

originally posted by: masqua
Perhaps because it's too early to tell just who the attackers were?

It's possible it was orchestrated by a a couple of discontented Frenchmen who wish to foment anti-Muslim anger within France as well. We just don't know yet.

It was a terrorist attack regardless of who did it. Terrorist doesn't mean Islamic.

So... not knowing who it was has nothing to do with what it was.

Police launched a massive manhunt for the masked attackers who reportedly hijacked a car and sped off, running over a pedestrian and shooting at officers.

Police said witnesses heard the attackers, who were armed with a Kalashnikov and rocket launcher, shout "we have avenged the prophet" and "Allahu akbar" (God is greatest).

Two police were confirmed among the dead and four people were critically injured."

It's not like using "alleged" when referring to an individual who can sue somebody for slander. In fact, if the was not to rush to judgment, they could simply use the term "alleged terrorist attack," but that would make them look like idiots. And putting quotes around a word is not going to give them legal protection. That's silly.

Instead they use to grammatical quotes around the word to express disagreement. That's what quotes around a word in this context means. These are journalism majors. Believe it or not, this is taught in grammar class.

Keep watching for it. It's common.

Check out these headlines:

So it hasn't been "proven" yet that the attack is horrific?

So journalists can never use the word "terrorist attack" until the suspects have been apprehended and convicted legally of terrorism?

Seriously? You believe this?

I think you are right here. It's probably a journalistic/legal rule to do that when it hasn't been proven yet. Sort of like when they say "allegedly" when a person has killed someone but hasn't gone to trial yet.

So now all of a sudden the "journalists" have "rules"?

Sometimes a quotation mark is used for a specific quote by someone
Perhaps Obama used the word "horrific" in his statement, so it was in quotation marks as part of his actual quote? In other words, the journalist is implying that the word horrific is not his own, but is Obama's direct quote.

I think you're stretching a bit here to assume it's all about not offending someone.

It's not a quotation mark, they've used an Apostrophe.

I usually use them to emphasize a word or phrase and I'm fairly sure the media generally except it as grammatically correct and use it in the same matter as well.

You could call any act of violence 'terrorism', up to and including 'break and enters' and muggings. If it upsets the public peace, you can say it's terrorism.

It's SINGLE quote marks around the word 'terrorist'.

Use Single Quotation Marks in Headlines

So, apparently, someone called it a "terrorist attack" and the headline is putting that word in single quotes to denote an exact quote.


President Francois Hollande, who immediately rushed to the scene of the shooting, described it as a barbaric terrorist attack.

As regards the Obama quote, he actually said the word "horrific". That's why it's in quotes. It's a direct quote. Here's his quote used in a headline:

"I strongly condemn the horrific shooting at the offices of Charlie Hebdo magazine in Paris that has reportedly killed 12 people," Obama said.

I think you're reading WAY too much into this use of quote marks...

The media only wants to use it for white males.

A white American male that wants secure borders or disagrees with anything that comes out of obama's lying mouth is instantly branded a terrorist/homegrown terrorist.

But when muslims go on killing sprees,commit ACTUAL ACTS OF TERROR-they are referred to as innocent victims of the evil white man.

In this case-they only used the word at all because the media was attacked.

If they attacked anyone else,though,they would never have used the word.
edit on 7-1-2015 by FalcoFan because: derp

originally posted by: kaylaluv
a reply to: Jamie1


And no, I wasn't saying that they wouldn't take the quotes off terrorist until they get convicted. I was saying that they may have put the quotes in because it was implied that these were terrorists but not confirmed yet by the authorities, just as a journalist rule??


Nice. Google is my friend. I found Reuters Handbook of Journalism:

We may refer without attribution to terrorism and counterterrorism in general, but do not refer to specific events as terrorism. Nor do we use the word “terrorist” without attribution to qualify specific individuals, groups or events. “Terrorism” and “terrorist” must be retained when quoting someone in direct speech. When quoting someone in indirect speech, care must be taken with sentence structure to ensure it is entirely clear that they are the source’s words and not a label. “Terrorism” and “terrorist” should not be used as single words in quotation marks (e.g., “terrorist”) or preceded by so-called (e.g., a so-called terrorist attack), since that can be taken to imply a value judgement. Use a fuller quote if necessary. “Terror,” as in “terror attack” or “terror cell,” should be avoided, except in direct quotes. Report the subjects of news stories objectively, their actions, identity and background. Aim for a dispassionate use of language so that individuals, organisations and governments can make their own judgement on the basis of facts. Seek to use more specific terms, such as “bomber” or “bombing,” “hijacker” or “hijacking,” “attacker” or “attacks,” “gunman” or “gunmen,” etc.

So, according to Reuters Handbook of Journalism, the writer in this case violated the journalistic rule by putting the word "terrorist" in quotes.

You might not be aware of this, but use of "terrorist" is a big deal in academia and the media. It's not a random thing, it's one of the core issues. And it IS all about being politically correct and not offending people.
edit on 7-1-2015 by Jamie1 because: (no reason given)

That's Yahoo's headline for the terror attack in Paris here.

Anybody understand the grammatical reason to highlight certain words in quotes? It's used when the author doesn't agree with the characterization of that word.

And, quite frankly, this looks much more like a professional hit than terrorism. So that would probably have been my call as well.

Depending on developments, that article may be edited later in the day -- removing the quotes.

posted on Jan, 7 2015 @ 11:49 AM
link
I think CBC is using the correct terminology in their headlines. Let’s not say for certain that they were Islamic affiliates of al-Qaeda until it’s been proven. Anybody can yell “Allah”, I’m sure.

Rey said the gunmen spoke "perfect French" and claimed to be members of al-Qaeda.

One can speak the language perfectly and still have an accent. But I'm not sure these were Islamic terrorists. And what does the word "terrorist" actually mean, anyway? I think this group, whomever they are, are terrorizing people, and could therefore be called terrorists.

As I said, this is making a mountain out of a mole hole. The OP saw the quote marks and was offended, so made a thread about it.
edit on 1/7/2015 by Benevolent Heretic because: (no reason given)