The Process of an Air Crash Investigation

posted on Jan, 7 2015 @ 01:01 AM
link
After reading a few of the plane crash threads on this site, it occurred to me that a lot of people don’t know how crashes are investigated or what the process is, which ultimately leaves them confused when trying to wade through the multitude of information put out by reporters. I saw an opportunity to educate fellow ATSers and potentially prevent some of this confusion in the future. Hopefully the background info and hypothetical case study will do just that. This write up will deal mainly with the stereotypical airliner crash, not a more common general aviation airplane crash.

It is important to understand that the sequence leading up to an airplane crash is almost guaranteed to be long and have multiple steps. An airplane almost never goes down because of one thing- it is always a chain of events that leads to an airplane crashing. The exception being something like a bomb being planted in the airplane.

As soon as the crash is reported to the NTSB, agents are on their way. Investigator teams, called “go teams”, are on call 24/7 to be launched anywhere in the country/world at a moment’s notice once requested.

Once arriving, the first order of business (and usually at least partly taken care of by local authorities) is to search for survivors. Agents will coordinate with rescue teams in the area to search for any possible survivors. They will also coordinate with local law enforcement to secure the crash site. This is different depending on where the crash site is. If on land, securing and searching for survivors is relatively easy when compared to a crash in the ocean. An oceanic crash site will usually require a larger search and rescue effort. During all of this, the investigators will also have to interact with the media as well, to varying degrees.

After providing aid to any possible survivors and securing the crash site, investigators will begin to comb over the crash site. Everything is documented like it is a crime scene. Photos and videos are taken to be used in the future. Eyewitness accounts are also taken during this time.

Wreckage is examined and analyzed to wring out any clues that it can provide. If investigators think that a certain piece may be especially vital in the accident chain, they may send it off to subject matter experts who examine it further and see if the piece of wreckage broke or malfunctioned in a way that would contribute to a crash. If necessary, investigators will take all the wreckage and “re-build” the aircraft in a hangar in an attempt to hunt down where the malfunction originated. 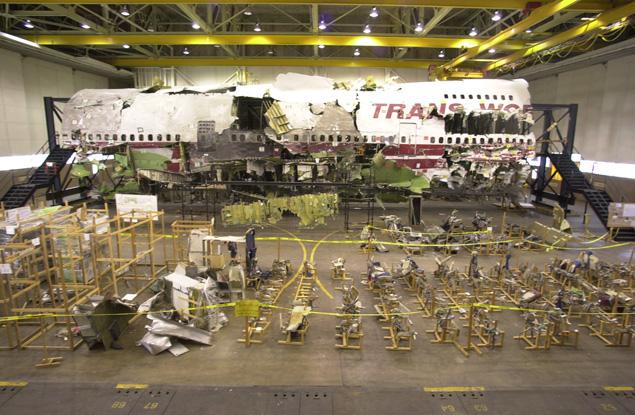 Many people are aware of the fabled “black boxes” that all airliner-type airplanes are equipped with. They are the Cockpit Voice Recorder and the Flight Data recorder. These two pieces of equipment paint an invaluable picture of the accident for investigators. They give a glimpse into the thoughts and performance of the crew, as well as allow investigators to create a visual of the airplane before it crashed (see here for video made from an FDR). As seen with AF447 and MH370, finding these boxes can be highly difficult in oceanic crash site investigations.

After bringing all this information together, investigators will figure out a list of causes for the crash. There are a very long list of potential causes for an airplane crash, but some of the most common are:
1. Poor Crew Resource Management- Crews that don’t communicate, identify the problem, fly the airplane, and take care of the problem all at the same time usually don’t fare too well.
2. Mechanical Failure- Pretty self-explanatory. Sometimes this is a result of the airline’s own maintenance, and sometimes it is a result of a problem that didn’t get worked out in the testing of the aircraft.
3. Pilot error- Self explanatory.
4. Fatigue- A growing concern in the last few years has been the fatigue levels of flight crews. There is proven science that a higher level of fatigue leaders to a higher chance of fatal mistakes in the cockpit.

Finally, the investigation team will compile a report and render their final verdict. The report consists of an impartial narrative of the flight up until the moment of impact. It also includes things like weather, pilot biographies, and any information from the airline’s flight crew manuals.

After rendering their final verdict, the investigation team will also recommend changes if necessary. For example, they can recommend that the 737-800 fleet’s radar altimeter be replaced immediately or that new pitot tubes be installed on all A330 aircraft. It is up to agencies like the FAA to take these recommendations, weigh them, and then decide whether or not to require operators to comply with them by issuing an Airworthiness Directive.

You can search the database of NTSB crash reports here.

A team is alerted that a 747 has just crashed on takeoff 1 mile south of JFK. They don’t know anything other than that it has crashed and that rescue operations are underway. The team is immediately launched to JFK to lead the investigation.

Learning more upon arrival, the team finds out that the crashed 747 was a 747-400F, a freighter version belonging to a worldwide freight company responsible for moving time sensitive cargo across the globe. The plane contained 4 crew members, all of who have been pronounced dead by rescue teams. They also learn that the crew was on day 14 of a 17 day trip, having flown across the world twice already and are very likely to be heavily fatigued after coming off of minimum crew rest the night before.

The team begins to take eyewitness reports from the tower controllers and pilots who saw the plane go down. All witnesses report seeing the number 4 engine smoking badly as the 747 rotated, and the airplane pitching up to a seemingly unsustainable nose high attitude before it went down. Upon further investigation, the team finds pieces of engine debris on runway 22R that the airplane departed from.

The team moves to the crash site to retrieve the black boxes and examine the wreckage. They have the number 4 engine removed and sent to be examined in a lab. The team finds all of the throttles firewalled, except for the number 3 engine.

After examining the black boxes, the team is able to get a clear picture of what happened inside the cockpit as the situation rapidly deteriorated, and is able to make their final report after pooling and analyzing all of the evidence.

The investigation team concludes that there was a number 4 engine failure at V1 + 5(takeoff decision speed plus 5 knots), and that the crew continued with the takeoff (the correct decision). However, after rotating and getting airborne, the crew becomes wildly confused. Their communication breaks down and the pilots take their attention away from flying the airplane to singularly focus on the emergency. They neglect to raise the landing gear or to maintain engine failure climb out speed. In addition, the pilot flying, the Captain, inadvertently puts the airplane into a greater climb attitude and doesn’t realize it-neither does the First Officer. During all this, the crew’s communication breaks down even further and they become confused as to which engine has failed. The Captain, without conferring with the FO, reduces the number 3 engine throttle to idle. As a result of both increasing climb attitude and reduced power, the aircraft loses speed and begins to stall. The crew is so caught up in the emergency that they ignore the stick shaker and don’t realize it until seconds before impact. All of this, the team finds, is magnified by the crew’s fatigue level.

The team concludes that the contributing factors to the crash were a complete failure of CRM, pilot error, mechanical error, and crew fatigue.

The air crash investigation process has run its course and a final report has been issued. Any further actions are the responsibility of the FAA and the company itself.

posted on Jan, 7 2015 @ 01:12 AM
link
Very nice write up! I always enjoy this type of information. Shadowhawk has some experience hunting down crash sites of then classified aircraft. Maybe he can throw in a couple paragraphs on that procedure as well!

Good read . Hard to put all the details into such a short (relatively speaking ) post . Good job . S&F

Great service to the community, I for one learned things and thus denied ignorance. I hope many more people come by to read it.

posted on Jan, 7 2015 @ 03:19 AM
link
One of the best original threads here in some time. And its surprising that no one has done it before. Thanks justwanttofly.

posted on Jan, 7 2015 @ 04:29 AM
link
Excellent post!. Very concise and informative. I wish there were more thread like this. Star and flag for teaching me something new...

Nice thread i kinda knew a little of that ive seen the warehouse where they get all the debris from a crash an study it in dayton before ....
But let me ask you in a world where i can find my lost 30 $ smart phone from any computer in the world to within 20 feet of it.
How oh How are we supposedly losing these 5 milloin dollar planes for what seems to be right into thin air .
I mean one plane fine i get that hey the locator or black box failed but come on i think we are at like three in the past year alone and thasts just the ones we know about....or the media tells us.

Great write-up! I think this deserves an applause, and not to mention a great deal of stars and flags, and hope it encourages several more threads such as this.

Because the devices that provide location data are powered by the aircraft engines. If they lose power, then those devices stop transmitting. Once they stop transmitting, unless there's a Primary radar antenna within 250 miles or less, the aircraft can't be seen. Once your cell phone turns off, you can't trace it anymore, can you? Same principle.

posted on Jan, 7 2015 @ 03:21 PM
link
a reply to: sweets777
And I will add to Zaphod's response that the Emergency Location Transmitters (ELT) carried on commercial aircraft will only work if they are deployed on the surface. They wont work if they end up on the seabed as water is very good at attenuating RF energy. The US Navy spent billions developing an underwater communication system for its ballistic missile submarines but that involved building giant VLF transmitters. The DFDR and CVR do carry pingers that work underwater but the assumption is you know roughly where the aircraft went down and the batteries only last for a month or two. Prior to the Malaysian 777 disappearing there was agreement to increase the battery size to at least double or triple the operation time as a result of the AF-447 A330 loss in the Atlantic some years ago.