Why are women and mother's so concerned with you getting married?

I occasionally see some of my mother's old friends.

Their main concern is whether I am single, and try to assist in ways that I can get married.

And my Mother, of course her main concern was also whether I was ever going to marry.

Also in the past, when I had platonic female friends, their main inquiry for me was whether I had a relationship with another girl, and how it was going.

What is it with mothers and women who are so concerned with marriage and relationships?

What is the motivation?

Any insight is appreciated.

They may go about it wrong at times... But the sentiment is generally very well intended.

originally posted by: Kangaruex4Ewe
Grandbabies and the feeling of security that you are/will be cared for and safe.


^^ Security and cared for in times of difficulty. AND that my daughter won't be alone in life. She has no brothers or sisters and is adopted so ....

posted on Jan, 5 2015 @ 08:55 AM
link
I used to the same way, and a lot of the marriage attitude is a little antiquated. That said, it's a great decision if you mean it. It does good things for your life, and finances.
People get married and screw up their lives too though, so be smart.

I haven't been married forever yet, so I'm not some sage, but this has been my experience.

Their main concern is whether I am single, and try to assist in ways that I can get married.


Do it when you see its right.

A mother may express disappointment, even *anger* toward their sibling because they are not married, regardless of whether they (the sibling) seems happy or not.

This tells me there might be something *more going on* then just mother's looking out for your welfare.

I observe many married people in perpetual arguments and fighting, experiencing hardship, worry and stress about their children, then they turn around and ask me when I'm going to get married.. huh what?
edit on 5-1-2015 by nOraKat because: (no reason given)

posted on Jan, 5 2015 @ 09:03 AM
link
Because when your mom is finished taking care of you she wants to make sure that someone else can take over when she isn't around anymore.

Another question is: Why is it with women, their main inquiry for me was whether I had a relationship with another girl, and how it is going, while men may never ask that question..
edit on 5-1-2015 by nOraKat because: (no reason given)

posted on Jan, 5 2015 @ 09:43 AM
link
My mother never pushed me to get married. She always told me to become financially independent so I never HAD to have a man take care of me.

This will date me, but when I was a young girl in the early 70's, I used to watch the TV show The Mary Tyler Moore Show. Mary Richards was my hero. I wanted to grow up to be just like her. So much so, that I even majored in Radio/TV/Film in college so I could be a TV news producer. Until my late 30's, I lived very much like she did, although I never became a producer - I got into advertising instead. I owned my own home by the time I was 30, and I was happy living the single life of a financially independent young woman.

A good friend (a married woman) that I worked with while I was in my 30's, was very concerned that I wasn't married. When I asked her why, she said that she didn't want me to be alone in my old age. I responded that according to statistics, wives outlive their husbands -- so she was in all probability going to be alone in her old age too. Didn't faze her - she tried to fix me up several times, regardless of my resistance. Then there was this one guy she fixed me up with..... I ended up marrying him at age 39, much to my surprise. That was 15 years ago. I don't know if I will still be alone in my old age, but it's been a pretty good ride so far.

Marriage isn't easy, but IF you can find the right person, and you are both willing to make it work - I say it's better than being alone. Having said that, I will definitely be following in my mother's footsteps by advising my 13-year-old daughter to take her time, think long and hard before she marries anyone, and make sure she can take care of herself first.

posted on Jan, 5 2015 @ 10:28 AM
link
Women grow up dreaming about being a princess and getting married to prince charming in a huge dress. They never grow out of that fairy tale dream.
Your mother thinks you getting married is a sign you are settling down and she will get grandkids.
Marriage is also a sign of commitment.

I know the feeling all too well.

Whenever I talk to my grandmother I always get the same question- "have you met someone yet?" and my answer is always the same-no. I suspect that she thinks I am Gay and even though I'm not I can't tell her the truth- I'm not marriage material and I can barely support myself let alone a nuclear family. A part of me thinks that she wants me to succeed so she doesn't feel left out when her friends discuss their grandchildren.

"So my Jimmy is a father again and runs a very successful computer business. What about your grandson, Mama Cake?

"Cake is alright, he's doing fine-just fine. He's still finding his calling but he's still doing what he can."

"Oh how unfortunate. I'm going to judge you by your grandsons actions from this point onwards."

My family is a mess.


Women grow up dreaming about being a princess and getting married to prince charming in a huge dress. They never grow out of that fairy tale dream.


Gosh, I must have missed that memo.

Guess I was too busy earning a living and keeping a roof over my head to be bothered checking my inbox for memo reminders on how I'm supposed to think.

originally posted by: CranialSponge
a reply to: Hoosierdaddy71


Women grow up dreaming about being a princess and getting married to prince charming in a huge dress. They never grow out of that fairy tale dream.


Gosh, I must have missed that memo.

Guess I was too busy earning a living and keeping a roof over my head to be bothered checking my inbox for memo reminders on how I'm supposed to think. 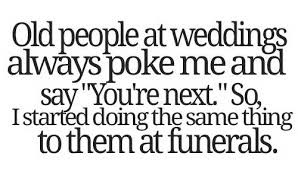 Isn't that exactly how a sweeping generalization works ?

Damn, I must've missed that memo too.

I need to check my inbox more often...


Apparently you should.
you have yet to give your opinion on the topic, you only gave your opinion of my opinion. Please enlighten us with your thoughts from an estrogen point of view.

originally posted by: jude11
Because when your mom is finished taking care of you she wants to make sure that someone else can take over when she isn't around anymore.


That is why I was so concerned about my adult daughters getting married.

They both had jobs that took them far away, we called nearly daily, but I still worried,
who would know if something bad happened and she didn't come home
how could I get to her in time if she got really ill and needed help

Silly, I know, they are/were adults

Ok, so that was it for me as I obsessed and worried about my adult daughters, the last one married in her late 20's.
There really wasn't any other motive. I have grandchildren from one daughter, but grandchildren were not my motive, her happiness and welfare were my motive.

posted on Jan, 5 2015 @ 11:48 AM
link
My mom and sister never really made these comments towards me but I suppose that's because they know me better than any other women.

My grandma I remember made a comment that some girl would come along and make me change my ways.

That was about 7-8 years ago and haven't heard a peep since.

You are right marriage isn't easy.

I was realistic with my daughters about that.

They saw their Dad and I struggle through difficult times in our marriage.

But now, after nearly 40 years, I can say it was worth it
I'm so glad I stuck it out during the times I thought about leaving
There were times I thought I hated him
But, looking back now - I realize that I was going through a very difficult
time at work and in my career and probably projected a lot of it
on our relationship, unfairly
And I think he did the same during times of career turmoil

But now, we are so glad to have stuck it out
we are happy and content with each other
our marital satisfaction beats the honeymoon phase
No, the sex isn't as great, for sure, with aches and pains
and surgeries and illnesses
But the deep love and contentment at just being together
is early indescribable

Yes, in the end, one of us will be alone again
but we have children we love and who love us
we have grandchildren who scream "Grandma" with joy
when they see us
and for 40 years we had each other
through thick and thin
through ups and downs
through hate and love
and in the end
the few years alone at the end
will be filled with the
laughter of grandchildren/great grandchildren
and the love of my daughters who
had a stable home life
and could see
marriage was hard work, but worth the life satisfaction
of a job well done.