At second funeral NYPD cops turn their back on de Blasio

posted on Jan, 4 2015 @ 02:21 PM
link
So, despite being warned against doing so, the NYPD cops felt the need to display their disapproval of the Mayor once again. This time at Wenjian Lius funeral.
www.wsj.com...

This liberal mayor thought he could live in the protective bubble provided by the police and at the same time publicly criticize them and demonize them, not so, it seems. He, arguably, precipitated public acceptance of the anti-police feelings in NY or at the very least gave tacit approval for anti-cop sentiment. Is he really surprised by the reaction he's gotten.

Out of control policing is a real problem and needs to be dealt with. However, many of the recent high profile cases were police dealing with actual criminals. Eric Garner is a questionable case but had little to do with race. The commanding officer on scene was a black sergeant, so.....

De Blasio is an idiot for turning on his police force over this case.

i think this picture is moving 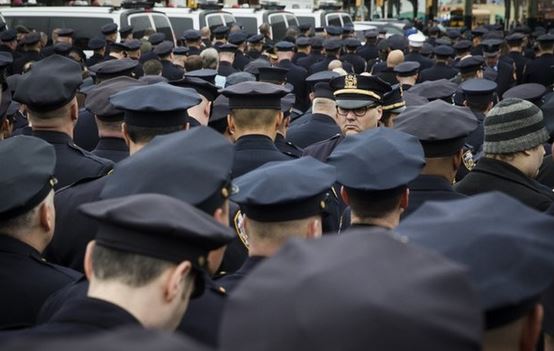 i read on twitter someone wrote, "Police, not the Enemy, but the peacekeepers"

not everyone is shooting black kids, or kicking cuffed people.

In all the pictures I've looked at it appears to be a good number looking both ways. Either way, it is a substantial number and a strong statement. Bratton asked them not to, so they're refusing his request.

I dislike many aspects of the institution of professional police forces. But so many of these recent cases were street thugs and real criminals getting their just deserts.

Give me a break op.

All the mayor said was that as the parent of a black child in the United States he felt it necessary to have certain conversations with his child on how to deal with the police. He said he and the millions of other parents of black children shouldn't have to do that. You can't argue that police treat black people differently. (An article last week in the times even talked about the % of off duty black officers that are harassed on their days off).

That's it, that's what' he said. He didn't condemn the nypd or the grand jury decision. The reaction just shows that The nypd are a bunch of babies who have forgotten who they work for.

They are not a military organization, they are civilian law enforcement and should be held accountable to who they work for, the citizens of New York.

Plus The fact that they protested against the wishes of the mans widow shows exactly what's wrong with the organization. The egos and do no wrong culture is out of control. They really think that they are in a war with the people that they are supposed to protect.

The entire organization needs to gutted.

Yeah i agree with you man, what a bunch of assholes, kudos to the people who faced the mayor during the speech.

I feel bad for the families.

He, arguably, precipitated public acceptance of the anti-police feelings in NY or at the very least gave tacit approval for anti-cop sentiment. Is he really surprised by the reaction he's gotten.

Well he works for the People of New York, not the Police...

It's his job to accept scrutiny from the public for over-zealous actions of any of the public servants being payed by the Taxes of the People.

They have the freedom to protest whatever they want...
It's their right...
It's also the right of every person in the city including the Mayor to protest the Murder of Eric Garner which was of course his sentiment being that it was a New York incident he didn't appove of.

This just shows the People where some of the NYPD stand.

Actually, you're wrong about that. Their fractious relationship goes back a ways, several months at least, if not longer.

And all parents in the US, and probably the world, have conversations with their children about how to deal with police. So for de Blasio to make it a racial issue is BS. He fanned the racial flames.

People who actually have to walk the streets for law abiding purposes are happy when they see a NY cop. A woman leaving work at night is happy when she sees a cop.

But there is a race problem with the police. His job as mayor is to fix the city's problems.

When off duty black officers feel threatened and are discouraged and threatened if they report misconduct there IS a problem.


The black officers interviewed said they had been racially profiled by white officers exclusively, and about one third said they made some form of complaint to a supervisor. All but one said their supervisors either dismissed the complaints or retaliated against them by denying them overtime, choice assignments, or promotions. The remaining officers who made no complaints said they refrained from doing so either because they feared retribution or because they saw racial profiling as part of the system.

Man you are assuming a lot in those statements about who does and does not like cops.

This mayor did nothing but express something that he told his child.

NYPD needs to get over it, it was not the cause that lead to that lunatic shooting the cops.
They can grasp at that straw all they want but no one is buying it.


Is that an assumption that anybody who didn't like the Murder of Eric Garner via the arms of a Pig must be on welfare, a criminal or a "street person", whatever that is?


Nothing you said was relevant to the point I made.
edit on 4-1-2015 by CharlieSpeirs because: (no reason given)

It's highly disrespectful for the NYC police officers to turn their backs on de Blasio in his presence and speeches.

Ever since he policed and campaigned for police reform years ago, the good ol boy network of policing felt tremendously threatened. Hence, they felt he was Public Enemy #1.

Just like a previous NYC Mayor, Dinkins, who btw was black, de Blasio has faced similar challenges and the established tainted network in NYC has reacted by disrespecting de Blasio beyond impunity.

Granted, de Blasio is no saint, and he has made some unfortunate comments along the way, but there is no proof anywhere that suggests beyond a shadow of a doubt he hates his police officers.

These disrespectful police officers should be disciplined, suspended or fired. There is no need for their continued whining. There are dead police officers and dead citizens who they should be mourning for instead of playing the victim role.

A funeral is no time to make a political statement. The police should have shown respect and consideration for the family. If you can't show respect and have some kind of restraint at a funeral, it questions how much the same police force can restrain their anger when dealing with the public. It was in poor taste, and I'm surprised there wasn't more level headed thinking against doing it.

So, protesting at a funeral. I guess this puts the NYPD in the same class as Westboro Baptist Church.

posted on Jan, 4 2015 @ 04:47 PM
link
As an outsider, the NYPD - and other police services in the US, would be best served by putting their moral weight behind improved transparency and independent investigations against apparent abuse of their powers.

Any police officer killed in the line of duty is an affront. However, there are too many apparent injustices perpetrated by the police acting as a "closed shop" for it to be comfortable.

I mean, shooting dogs, for a start!

posted on Jan, 4 2015 @ 06:02 PM
link
The police have committed an unforgivable insult to these families by protesting at these funerals. Their action has stolen the headline (knowingly) and left the deceased officer a sub headline. 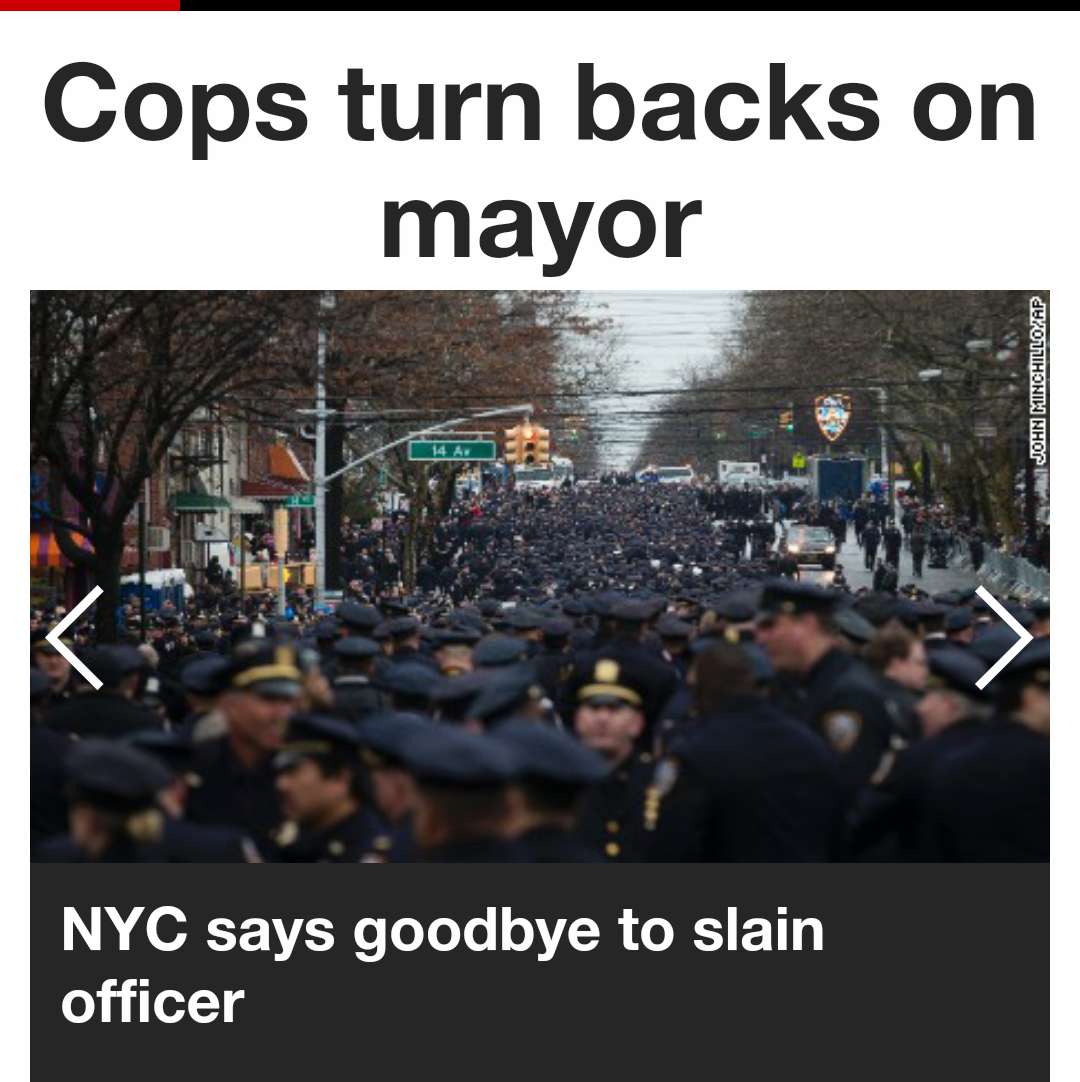 originally posted by: DancedWithWolves
The police have committed an unforgivable insult to these families by protesting at these funerals. Their action has stolen the headline (knowingly) and left the deceased officer a sub headline.

And this is a completely false comparison with Westboro Baptist. Those people were promoting their anti-gay agenda at military funerals totally unrelated to them in any way.

The NYPD's perspective is that De Blasio threw them under the bus, implied they were racists, and directly contributed to the environment that led to the killings of the officers who were being buried.

Apologies for disagreeing, but I feel in this situation NYPD is exactly comparable to the Westboro Baptist Church. Protesting at a funeral...disgusting. They now have mine...disgust that is. NYPD took a page straight out of the Westboro play book. The boys in blue are fools for doing this.