Car Transport Runs Aground in Solent

posted on Jan, 3 2015 @ 06:33 PM
link
Not a good time for shipping at the moment what with the ferry fire , todays discovery of an upturned cargo ship and now a car transporter ship has run aground in the Solent, off the Isle of Wight. 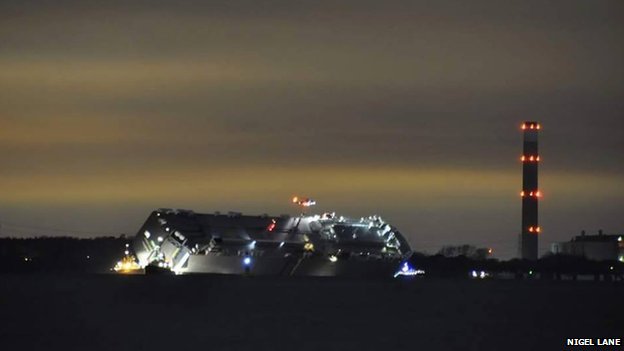 Not much more information other than a rescue operation is underway.


The ship was on its way to Germany when it ran on to the Brambles bank, in the entrance to Southampton Water, at about 21:30 GMT, the RNLI said.
The ship's crew are being rescued from the water and onboard the stricken vessel, which is listing at 45 degrees.
www.bbc.co.uk...

Despite our technological advancements heralded daily, unfortunately ships are still built to a very low standard of seaworthiness. The average of one vessel loss per week has remained more or less a constant for as long as we have been keeping records.

Aside from the three you casualties you mentioned this week, Gearbulk lost the M/V Jupiter off Vietnam just a few days ago. It was a well kept ship, and it looks like ore liquefaction lead to a rapid sinking. Only one survivor has been found out of 19. Such useless waste of life, when all it would have taken is a few more bulkheads in the cargo bays.

Car carriers in particular have a bad reputation for capsizing, thanks in large to the vast open decks. Often you get a cascade in vehicle breakaways, that causes a load shift, then there is the subsequent possibility of fire, and as little as an inch of water on the open deck can cause a catastrophic asymmetric ballast. Lots of precedence there.

The sea remains cruel, but not as cruel as the mess wrought upon it by men and their toxic waste laden floating environmental catastrophes.

posted on Jan, 3 2015 @ 08:04 PM
link
a reply to: gortex
I live In Portsmouth
This is right opposite from where our Home Is
Theres always helecopters ect

Its a Naval Port after all but I thought the traffic was high today .
Weathers been calm Im thinking it may have lost power ,


Controller Andrew Jenkins added: "What they'll probably do is do some assessments of the vessel, check the hull, make sure there's no ingress of water, and the integrity of the hull is intact.

"Then they'll look at the best ways of removing the vessel, whether that's via refloating it on the next tide, or having to bring in other equipment to remove it."

It said: "The crew have been taken to HMS Daedalus at Stubbington by helicopter [and] the Marine Accident Incident Branch (MAIB) has been informed.

"The crew confirmed the vessel was not taking in any water."

A spokesman said an operation to re-float the ship was under way and it was not "a lost cause".
www.bbc.co.uk...

posted on Jan, 4 2015 @ 07:01 AM
link
I intended to pop down to the beach this morning to watch it being rescued, but over slept due to the coast guard helicopter buzzing overhead until late. (I back on to Daedalus so there is not escape from the noise)

At least no one was badly hurt.

I guess we are to believe the ferry accidentally grounded on the sandbar and the cargo shifted.
The QE2 ran aground there but did not have a cargo shift so she was easily pulled off at high tide.

I'll get back to this later I've got the radio playing a retro tribute to "the Who" ATM.
edit on 4-1-2015 by Cauliflower because: (no reason given)

posted on Jan, 4 2015 @ 03:05 PM
link
a reply to: Cauliflower
Captain ran aground on purpose as the ship was listing.
He thought grounding the vessel was the best option to save both crew an cargo.

posted on Jan, 8 2015 @ 06:52 AM
link
Last night the high tide unexpectedly refloated the ship, the last I heard was about 8.30pm it was slowly heading towards portsmouth then it regrounded between hill head and lee on solent. I am going down to the beach this afternoon to see what the situation is now.

originally posted by: eccentriclady
Last night the high tide unexpectedly refloated the ship, the last I heard was about 8.30pm it was slowly heading towards portsmouth then it regrounded between hill head and lee on solent. I am going down to the beach this afternoon to see what the situation is now.

Any indications if it was accidental or deliberate again this time round? As in "woo hoo we're floating again.....uh-oh better get it grounded asap"

Well done the Captain either way. With all the reports you hear of rubbish captains it is good to see some actually know their trade!

posted on Jan, 8 2015 @ 07:00 AM
link
I have no idea as yet, I don't think its been reported in the media. An aquaintence of mine was helping direct the ship and posted on fb.

There were reports of a Saucer type UFO in area the night of the original grounding.
Not enough information yet to know for sure what is going on.
The Brits usually beat me to the door..

I live 4 minutes from the beach, my bedroom window faces the beach direction and I have a huge mirror on the opposite wall, fantastic for watching storms come in :-) the other window faces towards the isle of wight, I didn't see anything unusual and the only noises I heard were the helicopters as I back on to the air field. If I hear anything about the ufo I will of course post it here. As yet there are no rumours or gossip in the village.

posted on Jan, 8 2015 @ 10:50 AM
link
From the mainland it looks as if the ship has run aground by the isle of wight, a mile or two from its previous resting place. possibly in the middle of the shipping lane. Ive taken a couple of photos, not sure how they have come up, will know when I manage to upload them to my laptop. will post them here anyway, possibly someone with more knowledge than I have will be able to blow them up.