Summary
Often depicted in German folklore as a horned anthropomorphic devil, Krampus is essentially the counterpart of Saint Nicholas. Krampus is said to punish misbehaving children during the Christmas season in stark contrast to Saint Nicholas whom rewards children for their good behavior.

Who is Krampus?
Krampus is the Christmas Devil. He is the dark companion of Saint Nicholas, the European gift giver of the winter season. One may wonder how Saint Nick might punish all those ill behaved children, well, that unseemly task falls to Krampus. Krampus, also known as Ruprecht, Black Peter, Knecht, Klaubauf and others, is the hell-bound Punisher of wicked misbehaving children, he is typically imagined as your stereotypical devil; cloven hooves, long goat-like horns and a demonic tongue. Though he is sometimes seen as a foreboding man dressed all in black or a hair covered man-beast.

Krampus' methods of child punishment are quite extreme using switches to swat and spank children and sometimes whipping them with a rusty chain before dragging the ill behaved child of to hell in a basket.

Origins and history
The origins of Krampus are obscure to say the least. Regions in the Austrian traditions share a handful of similar figures, more widely, Krampus is one of many companions to Saint Nicholas in several regions of Europe.Some anthropologists and folklorists believe Krampus may indeed have pre-Christian roots in his history.

There seems to be little doubt as to his true identity for, in no other form is the full regalia of the Horned God of the Witches so well preserved. The birch—apart from its phallic significance—may have a connection with the initiation rites of certain witch-covens; rites which entailed binding and scourging as a form of mock-death. The chains could have been introduced in a Christian attempt to 'bind the Devil' but again they could be a remnant of pagan initiation rites.Maurice Bruce, 1958


The Saint Nicholas festival we are describing incorporates cultural elements widely distributed in Europe, in some cases going back to pre-Christian times. Nicholas himself became popular in Germany around the eleventh century. The feast dedicated to this patron of children is only one winter occasion in which children are the objects of special attention, others being Martinmas, the feast of the Holy Innocents, and New Year's Day. Masked devils acting boisterously and
making nuisances of themselves are known in
Germany since at least the sixteenth century
while animal masked devils combining
dreadful-comic (schauriglustig) antics
appeared in Medieval church plays. A large
literature, much of it by European folklorists,
bears on these subjects. ... Austrians in the
community we studied are quite aware of
"heathen" elements being blended with
Christian elements in the Saint Nicholas
customs and in other traditional winter
ceremonies. They believe Krampus derives
from a pagan supernatural who was
assimilated to the Christian devil

Krampus has persisted through generations. By the 17th century Krampus was being interwoven into the popular Christian winter traditions being applied as an often malevolent counterpart to Saint Nicholas.
www.krampus.com...
en.m.wikipedia.org...
Meet Krampus, the Christmas devil.

Who is going to take that seriously? His name should have been something uber scary and awesome. Here's a few suggestions for ol' Krampus:

All these names would, no doubt, inspire nights of terror and sleeplessness into the beds of children. I can just see it now! Hey kids Here's KILLTOY (cue children running in circles)... Ahhhh, Christmas cheer eh.

Regardless of his name I think it is interesting there is a Christmas devil. My friends were telling me about Krampus. I just had fro come home, do a little reading and share him with ATS.

posted on Dec, 24 2014 @ 12:32 PM
link
Krampusnacht
On the Eve of the feast of Saint Nicholas it is said that Krampus, accompanying Saint Nick or alone, visiting the homes of naughty children sometimes punishing them and sometimes leaving lumps of coal or bundles of ruten, bundles of birch twigs Krampus uses to whip children, which have importance in pre-Christian pagan initiation rites.

Krampuslauf
On Krampusnacht in Austria and other parts of Europe, intoxicated revelers, often dressed as devils and other creatures including witches and sometimes bearing torches, masquerade through the streets frightening children and adults alike. This is Krampuslauf,
or Krampus run. These costumed carousers roam through the streets of towns punishing those that have been bad, often targeting the young ladies of the town prompting many women in areas where Krampusnacht is celebrated to remain indoors on that night.

The largest Krampuslauf is held in Scladming, Austria where it is typical for up to one thousand Krampus to gather for the festivities.

During the mid-twentieth century the practice of Krampusnacht was being widely discouraged by the Austrian government. After the Austrian civil war of 1934 the practice was altogether prohibited under the Fatherland Front or Vaterländische Front by the Dollfuss regime and the Christian Social Party. Sometime during the 1950's the Austrian government gave out pamphlets titled "Krampus is an evil man". Despite ongoing public debate regarding whether Krampus is appropriate for children or not, there has been a continuing upward trend in Krampusnact celebration.
boogeymen.wikia.com...
edit on Cpm12Wednesday3620141831Wed, 24 Dec 2014 12:36:18 -06002014 by CagliostroTheGreat because: structur/ add source
edit on Cpm12Wednesday3720145731Wed, 24 Dec 2014 12:37:57 -06002014 by CagliostroTheGreat because: structure... again 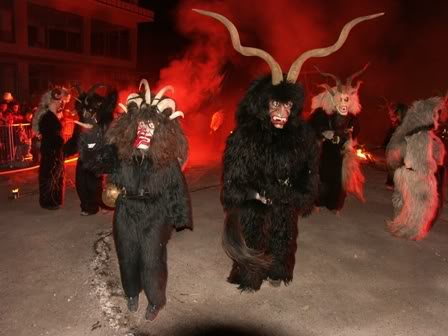 Thanks for the heads up, I will never go to Austria at Christmas time. There's good weird and then there's abject terror!

I had initial misgivings regarding the plural form of Krampus as well.

It caught me out, I'll admit it! Only a true fiend would mess with plurals, to add another, subtler layer to his evil. Krampus freaks me out.

Hebis pretty terrifying. Which is why I was surprised that I had never hears of him before. Doing what little research I did was enough to lead me to the conclusion that, indeed, Krampus is an evil man. Definitely not the type of dude I would expect Saint Nick to hang out with.