In a 76-page report released on Dropbox on Thursday, a new startup called Hyperloop Transportation Technologies laid out plans for building Musk's futuristic transportation system, which could cut travel time between Los Angeles and San Francisco down to 35 minutes. The trip takes up to 12 hours by Amtrak train, and more than six hours by car. The system would carry passengers in pods moving as fast as 800 miles per hour, according to the white paper.

from a 12 hour train ridr to a 35 minute hyper ride....pretty awesome


Hyperloop Transportation has drawn up maps with lines connecting every major U.S. city.


The other goal is to keep it cheap. While his plan envisions making luxury pods available, Ahlborn said the estimated ticket price for economy-class seats would be about $20 to $30. But he said rides would ideally be free -- perhaps supported by ads, to take advantage of time spent with a captive audience of travelers.


In the meantime, recent publicity about the Hyperloop has drummed up interest. His team of about 100 engineers, who are paid largely through stock options, seems set to expand. “I would say that, on average, we’re receiving 10 to 20 new applications per hour,” he said with a laugh.

i could handle being hit with non stop ads in surround sound for 35 minutes if i could travel that far for free.

I certainly wouldn't ride on the first couple hundred trips or more. What happens if a section is out, or a large truck gets suddenly stuck on the tracks, or if an immovable object meets this movable machine? Yikes.

posted on Dec, 20 2014 @ 10:44 AM
link
a reply to: Grovit "Ten years" is wildly optimistic. If you read the paper www.dropbox.com... you will see that the design of the pods seems well along but the propulsion and suspension details are still vague. The concept of "rights of way" was given short shrift and would be the show stopper unless piggybacked on a rail system; meaning that the railroads would have to see this as non-threatening or own it. If you could power this with solar power [questionable] in the West, the East would likely need some augmentation. The speeds are only attainable in a partial vacuum in a precision machined tube, similar to a smooth bore cannon. Air leaks into the tube would be disastrous for projectile pods travelling at speed; the design should include the option of pod burial in group graves of mixed body parts.

"The trip takes up to 12 hours by Amtrak train, and more than six hours by car."

How is a train slower than a car??

Back on topic: Big Oil will kill this, we cant have people ditching their fossil fule mobiles for public transport.

originally posted by: Aleister
a reply to: Grovit

I certainly wouldn't ride on the first couple hundred trips or more. What happens if a section is out, or a large truck gets suddenly stuck on the tracks, or if an immovable object meets this movable machine? Yikes.

Same thing I was thinking.

The plus side is if you hit something going that fast you wouldn't have to worry about medical bills.

At first I thought "hyperloop" was some kind of spacetime warp engine...

"The trip takes up to 12 hours by Amtrak train, and more than six hours by car."

How is a train slower than a car??


That struck me as well. I seem to remember there is 55mph speed limit for cars that would imply the train is travelling at an avg speed of 27mph!!!!!! Freaking hell. I think the US rail network needs to get its avg speed up to 100mph asap with a target of 200mph. Damn site cheaper than a hyperloop. Hell you have big wide open spaces for nice straight ultra fast routes. Here in the UK our island is very crowded and yet we can travel from Glasgow to London in 4hrs30mins (400miles) with stops !!! Oh and that's a speed restricted route due to the victorian age curves .

The expression sledgehammer to crack a nut springs to mind.

i was hoping for some sort of teleportation situation.
go into the port in LA looking like grovit
come out in frisco looking like brundle fly

You're not fast , You're last in the big world 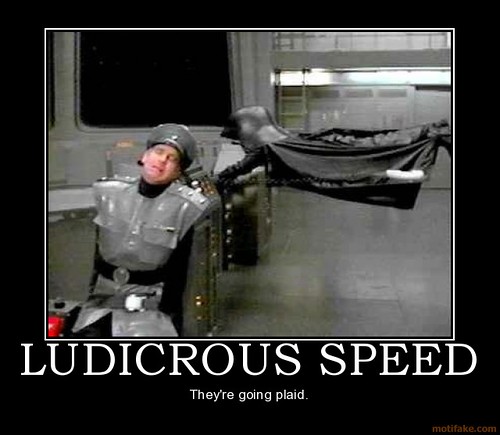 A star to you for the Spaceballs reference!

A star (and flag) to the OP for the news. I for one welcome this awesome sounding train. But for some reason, I keep hearing the "monorail" song from The Simpsons in the back of my head. Not that I think the idea of the hyperloop is a bad idea, but does the company have any previous knowledge with trains in general? Or are they just hopping aboard hoping they'll be able to wing it?

I see from a quick Google search that they're crowdfunded, but they also have attracted some rather knowledgeable engineers. Let's hope this goes according to plan, would love to have more of these sprout up across the nation.

So this tech needs a vacuum tube to operate. A vacuum tube stretching the San Andreas fault line. If air gets in the tube or there is a loss of the vacuum due to tiny crack, there would be a catastrophic loss of forward momentum which could likely kill everyone on board. Ya, seems safe...

originally posted by: douglas5
10 years is a long time to wait for a train America , China has powered ahead with new high speed tracks 350 mph trains are fact not fantasy

You're not fast , You're last in the big world

If its a race/competition, it wouldn't make much sense to start building a 350 mph version now, when we can (if Musk is right) 2.5x the current world's fastest in only 10 years. 10 years is not a very long time to leapfrog to the head of the pack (by far) in rail (tube) transit.

originally posted by: Eunuchorn
So many people in this thread afraid of death. I'll happily die as the first test passenger to such a system.

It is not fear of death, it is reluctance to be injured or killed for an ill-planned crackpot scheme. If high speed rail is important, build high speed rail. It is known technology and the fruits of such may be enjoyed for the next 50 years while the Musk-atel induced dream system is still in the planning stages. This is similar to Hot Fusion power plants which, 60+ years later are "just around the corner."

As to your volunteerism, you will likely save some crash dummies from being parted out. I'm sure your heirs already have lawyers on retainer and are anxiously awaiting Cannonball Eunuchorn's big ride. A win-win for all concerned.