posted on Dec, 19 2014 @ 04:48 AM
link
I always thought the Kecksburg acorn was something explainable, here's the most likely scenario ...military does a test of this new propulsion system and blast the thing into space accidentally then they find it and the secrecy around it is actually the fact its highly radioactive.

Is this what the Die Glocke Nazi bell project was really about?
Interesting for sure!

posted on Dec, 19 2014 @ 05:34 AM
link
This is interesting, even when presented with undeniable evidence some people refuse to admit the truth. This is a Human condition that appears to be wired in from birth, its almost like we were designed to believe in fantasy.

Its perfectly logical to assume Roswell was a similar type of event and surrounded in fantasy to hide the truth from the us, I'm betting it was an altitude test of humans to see if they could survive the van allens radiation belt and when they come down all cooked up servicemen confused them with non-human entities - probably Japanese prisoners of war.

I am of the opinion what we see in our skies are explainable phenomena but the Governments of the world love to see us in fear because then we are controllable, when we see something we cannot explain we become rigid with fear and become automatons for the government to manipulate and exploit.

posted on Dec, 19 2014 @ 06:31 AM
link
Interesting but I think before we 'close the file' on this you'll have to come up with more than 1950s film footage of something looking like an acorn.

Even the link you posted refers to :

Whilst the Kecksburg incident happened late into the afternoon of December 9th 1965.

The 'official' story is that a meteor fell to earth of course.

originally posted by: mazzroth
I always thought the Kecksburg acorn was something explainable, here's the most likely scenario ...military does a test of this new propulsion system and blast the thing into space accidentally then they find it and the secrecy around it is actually the fact its highly radioactive.

I had trouble viewing that video on space.com but I found a video of the same title on youtube that plays for me, is it the same video?

You have an interesting hypothesis and I'm open to the possibility and not rejecting it, however there's a huge gap between your hypothesis and "close the file".

Most of the tests seem to show conventional explosives, though the idea was to eventually use more powerful nuclear explosions to propel the craft. Also not all of the Orion test craft look like acorns, and not everything that looked like an acorn was project Orion. That shape happens to be somewhat aerodynamic so could have been used for any number of satellites or other spacecraft such as a Venus probe. A competing hypotheses claims that a Soviet spacecraft looked like an acorn and it would have been a violation of international agreements for the US to recover the spacecraft without returning it to the Soviets, so if they wanted to recover it and study the technology, they would need to keep it secret.

There is some speculation that the reentry of the Cosmos 96/Venera-type spacecraft was responsible for a fireball which was seen over southwestern Ontario, Canada and at least eight states from Michigan to New York at 4:43 p.m. EST (21:43 UT) on 9 December 1965. Investigations of photographs and sightings of the fireball indicated its path through the atmosphere was probably too steep to be consistent with a spacecraft re-entering from Earth orbit and was more likely a meteor in a prograde orbit from the vicinity of the asteroid belt, and probably ended its flight over western Lake Erie. U.S. Air Force tracking data on Cosmos 96 also indicate the spacecraft orbit decayed earlier than 21:43 UT on 9 December. Other unconfirmed reports state the fireball subsequently landed in Pennsylvania southeast of Pittsburgh near the town of Kecksburg (40.2 N, 79.5 W) at 4:46 p.m. EST (although it should be noted that estimating the impact point of fireballs from eyewitness accounts is notoriously inaccurate). Uncertainties in the orbital information and reentry coordinates and time make it difficult to determine definitively if the fireball could have been the Cosmos 96 spacecraft.

If you choose to reject the claim that the "path through the atmosphere was probably too steep to be consistent with a spacecraft re-entering from Earth orbit" and decide it was some kind of spacecraft, I think the Cosmos96 hypothesis is probably more likely than the Orion hypothesis, for numerous reasons and I've looked into everything I could find about this case.

I think the Kecksburg case is still a mystery and honestly after everything I've read about it, I still don't know what happened, if there was a cover-up, and if so, exactly what was covered up. We need better evidence than this to close the file but it's an interesting idea. I don't think project Orion has a high probability of being the best explanation though. If there was a spacecraft at all, the cosmos 96 seems more likely to me, but that idea is also far from proven.

I've also considered the possibility that there was both a meteor, and a spacecraft re-entry on the same day, perhaps hours apart. While it would be a coincidence, I can't rule out the possibility. This suggests it might be possible:


Kosmos 96 was destroyed when it reentered the Earth's atmosphere on 9 December 1965. Its reentry has been suggested as a possible explanation of UFO sightings over the United States and Canada, centred on Kecksburg, Pennsylvania; however analysis found the spacecraft probably reentered several hours before the sightings.

originally posted by: HomerinNC
that method of propulsion would be ideal for a starship, dunno why theyre not doing that yet...

Because it was estimated that about 10 people would die prematurely as a result of radioactive fallout which made people reluctant to use it before the nuclear test ban treaty, which eventually killed project Orion completely, at least for any Earth-based launch. I wouldn't rule out the possibility of an orion type launch in the distant future from a space platform constructed at a Lagrange point where the solar wind might blow most of the radiation out of the solar system. It is one of the more viable propulsion technologies, aside from the fallout.

posted on Dec, 19 2014 @ 08:11 AM
link
IIRC, witnesses at Kecksburg said that the 'acorn', had a band covered in 'heiroglyphics'.
That wouldn't fit with a Project Orion test, but it could fit with a Soviet test, if they mistook cyrillic writing for 'heiroglyphics'.

posted on Dec, 19 2014 @ 08:29 AM
link
a reply to: mirageman
Yeah, and when secretive agencies are subject to laws they abide by them, right? Or do they just get better at keeping tests hidden?

posted on Dec, 19 2014 @ 08:39 AM
link
a reply to: Ridhya
It's hard to hide an atmospheric nuclear test, I'd say probably impossible today. Given that Orion used dozens of nuclear detonations for launch I'd say it was impossible to hide even back then. They just moved the tests underground, so they didn't sop testing at that time.

They wouldn't have necessarily had to violate the nuclear test ban treaty if a nuclear launch into low Earth orbit happened before the test ban treaty went into effect. It can take years for an orbit to decay until the spacecraft re-enters the atmosphere, depending on the orbit.

originally posted by: HomerinNC
that method of propulsion would be ideal for a starship, dunno why theyre not doing that yet...


Who says they're not?

originally posted by: mazzroth
I always thought the Kecksburg acorn was something explainable, here's the most likely scenario ...military does a test of this new propulsion system and blast the thing into space accidentally then they find it and the secrecy around it is actually the fact its highly radioactive.

originally posted by: mazzroth when we see something we cannot explain we become rigid with fear.

posted on Dec, 19 2014 @ 11:45 AM
link
The Kecksberg Object was seen by witnesses to make a few course corrections before finally crashing into the woods. From my understanding the Orion Projects craft would not be able to do that.

Anybody here interested in the Orion Project I recommend a thread in the Research forum started by member Crazy Ewok titled Black Triangles, RK's and the Break Away Civilization. It's a good place to start reading about the Orion Project.

One of the reasons Orion stopped using Nukes as a form of propulsion was partly due to the fear of the miniaturization of nukes. As the project progressed they wanted to make the nukes smaller and smaller but with the same yield as a big conventional sized nuke. The reason was they wanted to hold more nukes on board the craft to further it's range. They started to get worried when the nukes were getting really small and so they either canceled the project or "canceled" the project. Maybe Orion spun off into nuke miniaturization for military applications. Maybe they found another form of propulsion and abandoned the nuke out the back approach. Who knows it's a mystery.

posted on Dec, 19 2014 @ 12:17 PM
link
While I tend to think that the Kecksberg Crash had something to do with the military, I don't think there are enough dots to connect it to the Orion Project. As far as I know, the tests never got as far as using actual nuclear explosions to drive anything. The ones in the videos are obviously conventional explosives.

My guess would be that it was some kind of malfunctioning Russian space probe that crashed. Possibly nuclear powered, but not using it for propulsion. It kind of even explains why some witnesses saw it change course, as its landing retro-rockets fired.

I could be wrong. Maybe it was aliens. Only the guys who took it know for sure.

posted on Dec, 19 2014 @ 12:37 PM
link
You've showed us a lauch of a chestnut shaped rocket.
What you haven't showed us, is that rocket turn into a craft, come down decreasing it's speed whilst maneuvering itself in ways that several witnesses could not explain.

originally posted by: butcherguy
IIRC, witnesses at Kecksburg said that the 'acorn', had a band covered in 'heiroglyphics'.
That wouldn't fit with a Project Orion test, but it could fit with a Soviet test, if they mistook cyrillic writing for 'heiroglyphics'.

Very interesting there. Had not considered that before. Either way though the 'acorn' was controlled by someone. Witness testimony said that it was making weird movements as it was on its way to crash landing.

It's still a very interesting story. I wouldn't say case closed on this one.

originally posted by: mazzroth
This is interesting, even when presented with undeniable evidence some people refuse to admit the truth.

Before you close the case, do you have any thoughts on who launched it, where it came from? 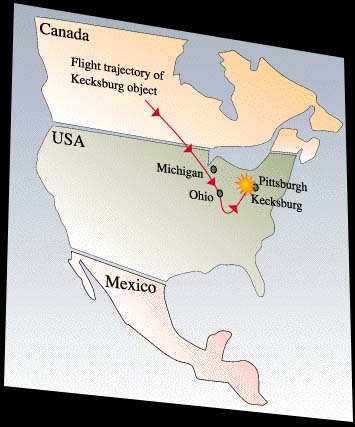