Alun Pepper won the award after polling almost twice as many votes as his nearest rival in the 40 strong line up of Manliest Men , which to my mind gives him a pretty solid mandate to be our new Manliest Man.

Flt Lt Pepper will now become an ambassador for the next 12 months for Orchid , a charity devoted to research and treatment in men's cancers.


He said winning Britain's Manliest Man was "quite humbling and also a bit surreal". "I laughed at first, along with everyone I have told since," he said.

"It gives me a great platform to go round talking to people about testicular cancer and to prove that if you have the operation it doesn't make you any less of a man."

He said since starting his awareness campaign he had already received emails from girlfriends and wives who had persuaded their partners to see a doctor.
www.bbc.co.uk...

How can you win this competition without a moustache?

I would have thought it a manatory requirement for entry?

a reply to: nonspecific

How can you win this competition without a moustache?


As women in bathing suits are now a No No so too with mustachioed men.

What about that "Man vs Wild" guy? Bear Grylls - where was he rated? 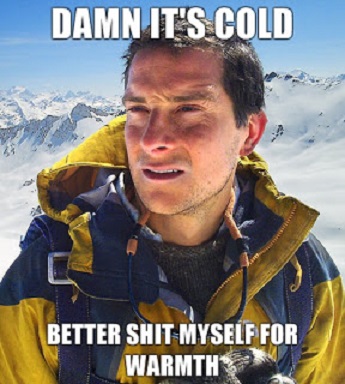 link
a reply to: IShotMyLastMuse

Hmmm... I think someone pulled a fast one here. I am sure that Flt Lt Pepper is manly, but it takes more than going about ones badass business while being short one testicle, to be the MANLIEST man, surely?

I would put up Matt Croucher, recipient of the George Cross. He tripped a grenade wire trap, and threw himself down on the grenade, back first with his pack squashing the grenade into the ground. He was thrown a fair distance by the blast, which also caused him a nosebleed, and some ear damage. These ailments caused his unit to suggest evacuating him on medical grounds. Because he is a stone cold badass, he just carried on his day, and if you read his book "Bullet Proof" you will see that not only did he help bring down the bomber who rigged the device in the first place, but that his entire service in the Royal Marines was peppered with insane moments of balls out awesomeness, including him surviving an RPG round fired at what amounts to point blank range, bouncing off his helmet among many, many other crazy events.

He has, as far as I am aware, still got both his testicles, and although that makes him a poorer representative for the cause of testicular cancer than Flt Lt Pepper, his credibility as a manly man is VAST and in my opinion superior to the creds of Flt Lt Pepper. Is there any person more manly than a man who can say that he saved his comrades from a grenade blast by body blocking the explosion? Is there any man more manly than one who can say that the worst he got when he was shot in the head with an RPG is a mild concussion which failed to do more than severely aggravate him?

I have no doubt that Flt Lt Pepper is a great fellow, and a manly one to boot. But for reasons which have nothing to do with how many testicles he possesses at this point in time, he is by no means the Manliest Man in Britain, and I object to the idea that Manliness as a concept ought to be hijacked to raise awareness of any damned thing aside from Manliness itself.

Testicular cancer awareness is a great cause, but there is NO cause good enough to warrant a person being named most manly, when clearly, there are better contenders for that particular description.

so much crap goes on the internet, including this post probably. at least that title went to a deserving man.

edit: i should say that also when we say "man" we mean people that are without pride, not selfish, doing what they do for humans sake. this guy is one of those people.
edit on b00001146 by Biigs because: (no reason given)

posted on Dec, 18 2014 @ 11:08 AM
link
It sure is lots different there than in the U.S. for whites (I will leave out blacks because I don't want to be called a racist ),where men are seen as manly if a guy has an Islamic muslim beard, a loud truck, blasts womens rights, and kills small animals for sport and not food. What happened to being a man because of : providing for your family, being an honest and charitable person and doing good things for mankind and maybe throw in an iron man triathalonist ? This guy sounds like a good guy though, its for cancer so his intentions are probably good. In the 80s having a mullet was manly.