This is Why North Korea Should Not be Underestimated

posted on Dec, 18 2014 @ 02:17 AM
link
North Korea is commonly underestimated and perceived by many to be a nation-state incapable of dealing damage to our way of life. It is commonly perceived to be a state riddled with poverty, that its economic troubles give way to weaponry so inferior that our armies would march over theirs in an afternoon.

This line of thinking is futile.

North Korea has been found responsible for the Sony hacks. The media has reported that it was 'centrally involved' in bringing Sony Pictures to its knees, all the while threatening terrorist attacks on American land. As i think is obvious, it is apparent that North Korea is more capable than what many give it credit for. These recent cyber attacks should only bolster this claim.

One may argue that North Korea's military capability may be inferior, but the fact is that the military is a central pillar of North Korean society. Much of the state's resources are invested into its longevity and effectiveness. Is it not unreasonable to believe that they may have greater weaponry than what they are letting on? They obviously have effective cyber warfare capabilities. Indeed, many analysts are speculating that North Korea's recent attacks on Sony may herald a new shift in warfare. One that moves beyond attacking websites and stealing intelligence. One that moves beyond the physical realm. One that directly cripples organisations and governmental branches through use of technology.

You may think North Korea is a negligible power riddled with poverty. But there is no denying that its military capabilities, cyber and otherwise, are not to be underestimated. In fact, our states should be concerned just how effective North Korea's military may be. They are a secluded country with a huge military structure. We may find ourselves in a troublesome position if we are to continue underestimating the North Koreans.

You may laugh that attacking a movie studio is nothing compared to other realms of warfare, but today it is private organisations and movies, and tomorrow it will be governments and societal structures.

As Newt Gingrich pointed out: "America has lost its first cyberwar."

Answer
+8 more
posted on Dec, 18 2014 @ 02:24 AM
link
The fact that North Korea went through this much trouble and got this butthurt over a FREAKING MOVIE shows that they're an even bigger joke than we all assumed.

Getting easily offended and defensive is a sign of weakness, not strength.
edit on 12/18/2014 by Answer because: (no reason given)


North Korea is commonly underestimated and perceived by many to be a nation-state incapable of dealing damage to our way of life.

Well I for one hope he doesn't use the new missile launchers he has, because we are all in trouble if he does... 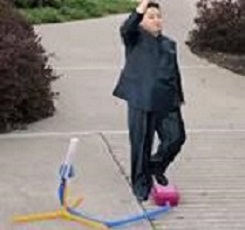 I hear they are hard to detect.

originally posted by: Answer
The fact that North Korea went through this much trouble and got this butthurt over a FREAKING MOVIE shows that they're an even bigger joke than we all assumed.

Getting easily offended and defensive is a sign of weakness, not strength.

Well it's a situation where one has to consider societal, traditional and cutural differences between nations.

Their reaction to The Interview may seem immature to us, but they would view it in a completely different context. Besides, it doesn't much matter when you actually look at the damage done. No one was expecting such capabilities and attacks coming from the North. It begs questions about their military prowess and their unpredictability. They are things not to be laughed at.
edit on 18-12-2014 by daaskapital because: (no reason given)

I disagree. Just because they can hack doesn't mean they can win a war. North Korea is laughable and the fact that they take such offense at a bad movie is hilarious! This shows how menial they are. It's ridiculous. I don't feel bad for Sony because they should have known better.

posted on Dec, 18 2014 @ 03:11 AM
link
I really don't believe a word of this alleged North Korean Sony hack and terrorism threats.
Sony was getting hacked all the way back to last year, and did little or nothing to fix it, but all of a sudden it's North Korea to blame.
As with most "news" these days, there is zero evidence, other than some cooked up idea that North Korea is upset about a film. No evidence, innuendo and speculation is not proof of anything. Sloppy journalism all around these days.

I think Sony needs to look closer to home for the leaks!

As for the terrorism threats, does anyone really take that stuff seriously? Sounds more like Sony trying to move away from releasing yet another PoS film, or maybe trying to drum up interest in it.

The fact that North Korea went through this much trouble and got this butthurt over a FREAKING MOVIE shows that they're an even bigger joke than we all assumed.

Sony as part of the wests propaganda machine had been paid using our tax $ to make Korea look stupid but who's looking stupid now.

Mide you its good to see NK back on the radar because after Syria, Russia, China, Iran and a host of other nations the USA wants to attack our NK leader was feeling a little left out.

I never said that North Korea could win a war due to their hacking abilities. I said that if anything, the recent events should indicate that North Korea is a state that we should not be underestimating. Their military is an essential pillar of their society, and the state itself is unpredictable. Surely you would agree that it is unwise to underestimate one's opponent? I think Sun Tzu is right when he says that ‘he who exercises no forethought but makes light of his opponents is sure to be captured by them.’ History will tell you that underestimating an opponent is a futile move.

As i said above, they view the movie in a completely different light to you and i. I don't think it is particularly ridiculous, as i understand that they have different perceptions and values to us.

The US government has apparently traced the recent hacks to North Korea. That said, i wouldn't put it past Sony to conduct an elaborate PR campaign in order to drum up interest...

Regardless of the veracity behind these cyber attacks, the truth remains that North Korea, like everything else, should not be underestimated.
edit on 18-12-2014 by daaskapital because: (no reason given)

posted on Dec, 18 2014 @ 03:36 AM
link
Hmmm.. funny they can trace the hacks to n. korea .. yet with all their fancy satellites and equipment they still are clueless on the whereabouts of mh370 ... somethings very wrong with the picture ...

No, not really. Mh370 was a short lived occurence amd the planet is a very big place where in a plane could easily be lost. These hacks on the other hand would be frequent and long in duration. They also haven't been quiet about it have they?


I don't believe its North Korea either, but comparing it to mh370 is just star baiting silliness. Personally id look toward Russia or China black ops. Just a guess, but both gain favor with him by doing this solid in his name.

I disagree. Just because they can hack doesn't mean theyxenophobiain a war. North Korea is laughable and the fact that they take such offense at a bad movie is hilarious! This shows how menial they are. It's ridiculous. I don't feel bad for Sony because they should have known better.

It is not a hard concept to understand, different cultures will react differently to things. The fact that you and other members can't grasp this shows the level of xenophobia that Americans are famous for, "they don't act like us so they are weird". I'll put it this way, what would American members say if someone made a Monty python style comedy about 9/11? I am sure there would be some harsh words and calls for blood. The North Koreans whether they are brainwashed or not see this as an insult to their nation.
edit on 18-12-2014 by sosobad because: (no reason given)

posted on Dec, 18 2014 @ 04:19 AM
link
You know that US arrogance is seen as their greatest weakness.
Lets be honest, taking the piss out of others is the lowest form of comedy. On a political and international scale its completely stupid, I would expect no less from the US, its arrogance.
North Korea with all its issues should be treated with a little more respect. It may not be able to conquer the US in a military struggle but it could cripple parts of it.

How many undetectable submarines do they have?

Not only have you Yanks pissed off the Middle east, Venezuela, Russia, China et al nations and now Muslims, also your own internal turmoil, ..........

Really whats the point if you cant see the writing on the wall?


North Korea has been found responsible for the Sony hacks.


is questionable and still is not 100% verified, only speculation.

I still don't understand how it can be North Korea.
A nation like this hasn't just learnt how to hack and all of a sudden become a big world player.

They've been doing low level crap for a while
www.foxnews.com...

So, why all of a sudden would they do a brute attack on.. of all things.. a media organisation?

All the rhetoric over the years the threats, the desires to cripple the evil USA.. why never do a cyber attack, then decide on a whim to hit SONY over a movie?

Nkorea my ass, Sony's being blackmailed by someone closer to home.

Maybe we can be lucky enough and its over their opposition to online piracy, ie piratebay - to which they'll think different for now?

Actually this was smart... Crippling critical infrastructure in your first major salvo without any kind of follow up isn't smart.

You may be right. Then again it was a movie about killing Dear Leader.

And living so close to the Chinese, your bound to learn a few things about hacking.