NASA's Curiosity rover is continuing to help scientists piece together the mystery of how Mars lost its surface water over the course of billions of years.

The rover drilled into a piece of Martian rock called Cumberland and found some ancient water hidden within it. Researchers were then able to test a key ratio in the water with Curiosity's onboard instruments to gather more data about when Mars started to lose its water, NASA officials said. In the same sample, Curiosity also detected the first organic molecules it has found. Mission scientists announced the discovery in a news conference today (Dec. 15) at the American Geophysical Union's convention in San Francisco, where they also unveiled Curiosity's first detection of methane on Mars.

I wish they would add more information than just
" Curiosity also detected the first organic molecules it has found."

and not another mention.

tooo little information , one sec .. ORGANIC MOLECULE ... begs another question ,,, was it alive or dead?
or did Odo pose for one of the cameras, rising out of the heavy water like swamp thing ?

we playing a guessing game now?

edit on 17-12-2014 by funbox because: Swampthing tilting head in interest

posted on Dec, 17 2014 @ 06:03 PM
link
I notice that they withheld some of the images from the website so I couldn't get a look at them at the same time they did. I would have spotted that water first and been a hero!

im checking the chem cams now , there's been an influx

found a link from their home page with this vid

Why won't they stop beating around the bush and admit that life has been found.

maybe its there in plain site, interesting how they chose this spot, covered in donut protrusions, sprinkled with sand
the pictures riddled with them 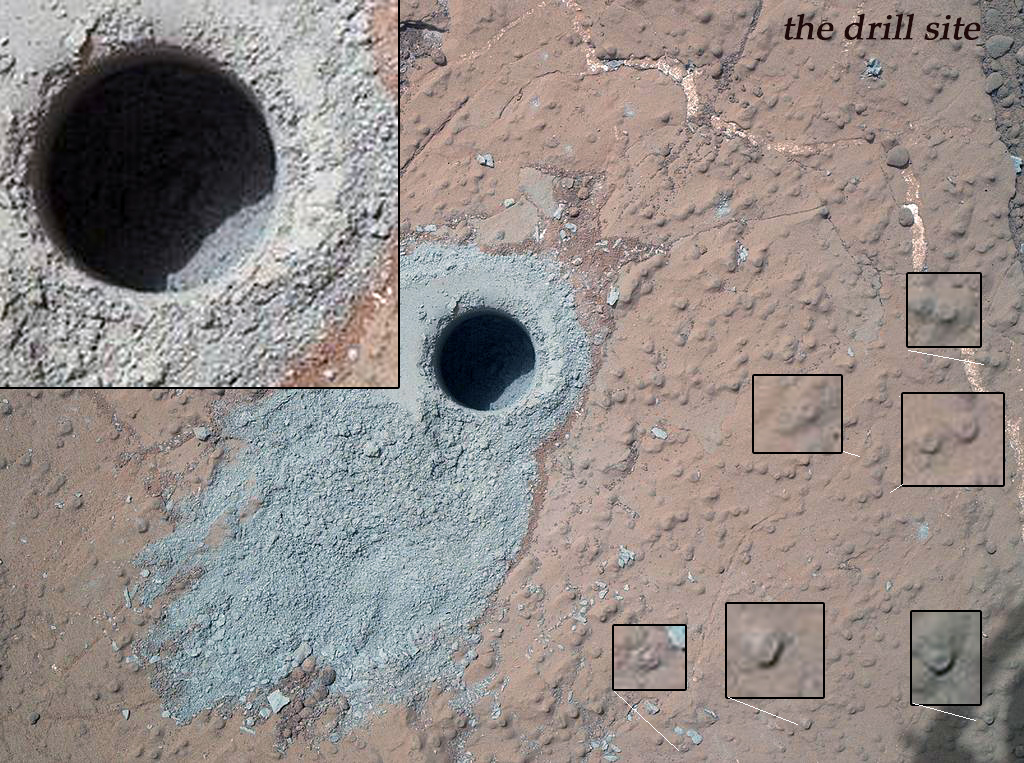 posted on Dec, 17 2014 @ 06:40 PM
link
Organic molecules? and then, " This suggests that the planet lost much of its surface water after the Cumberland rock formed" and then,
"space agency officials added in the same statement then most of the Martian water likely disappeared before Cumberland formed about 3.9 billion to 4.6 billion years ago."
That must mean?? that the organic molecules they found in the rock were at the thin edge of the water table when those organic molecules were about. So I wonder what was the sophistication of the organic material, that the organic molecules emanated from. Also, WTF is the difference between 'Much' and 'Most' in context. Like, Hoover saw what was a Fossil Crinoid in his opinion in a Mars picture and and NASA destroyed that piece of rock and Hoover was cross about that, because in his words, "They are animals!" animals have instinct..notably fear.

originally posted by: gort51
a reply to: funbox

Exactly, they might as well just say, we have found water, organic materials and methane on Mars...

They could find that in anyone's toilet, but you won't see anyone waving back at you from inside the porcelain god.

originally posted by: funbox
a reply to: Blue Shift

im checking the chem cams now , there's been an influx

found a link from their home page with this vid

Yes, and did you hear what the man says amongst other stuff, Methane comes out very clearly as being produced in the presence of water, and it is belching methane. It doesn't mean animal life alone, but it does mean water, so just to get over that hurdle.


originally posted by: gort51
a reply to: funbox

Exactly, they might as well just say, we have found water, organic materials and methane on Mars...

They could find that in anyone's toilet, but you won't see anyone waving back at you from inside the porcelain god.


Mars is the solar system's toilet.

does this mean the water content subsurface has gone up from 2%? are they also suggesting that the heavy liquid water in maintaining fluidity during the colder periods also ?...


was that an active Volcano I saw in the video? since when ?

posted on Dec, 17 2014 @ 10:39 PM
link
Erm, where did the news about finding water came from? Yahoo and Space.com aren't the best (or original) sources to rely on, sometimes the muddle things up for the sake of a big headline.

"Cumberland" rock was drilled in May 2013, so it's not exactly news. I think they did anounce about water then, as well as organics. But by "water" they mean water molecules locked inside minerals (such as clays), not the liquid water we'd all like to see on Mars.

So the only real news, from the horse's mouth (NASA and JPL), remains the detection of methane spikes.

We've known about the organics and the mineral-locked water for a while already :-p

Why won't they stop beating around the bush and admit that life has been found.


Because water or organic molecules ≠ life. There is water and organic molecules is lots of places in the Solar system, including comets, asteroids, and various moons.
edit on 17-12-2014 by wildespace because: (no reason given)

posted on Dec, 18 2014 @ 12:17 AM
link
Come and listen to a story about a Rover named Jed
A poor government employee, barely kept his family fed,
Then one day he was shootin at some food,
And up through the rock came a bubblin crude.


. Mission scientists announced the discovery in a news conference today (Dec. 15) at the American Geophysical Union's convention in San Francisco

I saw something the other day that indicated NASA was making a big announcement of a new discovery by the Curiosity rover at the Geophysical Union's convention. So it's legitimate.

There are also a couple of papers available discussing the water and Methane findings. And the actual press conference video is available on that page as well. Apparently the paper discussing the confirmation of the Martian organic compounds is to be published soon.

It is the sample from last year:
"The team spent over a year carefully analyzing the result, including conducting laboratory experiments with instruments and methods similar to SAM, to be sure that SAM could not be producing the amount of organic material detected."

originally posted by: funbox
a reply to: gort51

tooo little information , one sec .. ORGANIC MOLECULE ... begs another question ,,, was it alive or dead?

So if you ask "was it dead or alive", you would be begging a question that is not necessarily an accurate question to ask. If someone answered "dead", then that connotes the idea that it was something that was once alive, but then died -- and that may be a false idea.


. Mission scientists announced the discovery in a news conference today (Dec. 15) at the American Geophysical Union's convention in San Francisco


But it wasn't the discovery of water. Headlines can be misleading.

As I have mentioned earlier, mineral-locked water was found a while ago; this current news is about the organics and the mesurements of the hydrogen isotope ratios from the said water molecules, which helps explain how Mars lost its atmosphere and liquid water.

Bottom line, this is not a discovery of water on Mars.