Your computer is low on memory!

posted on Dec, 17 2014 @ 11:37 AM
link
I keep getting this warning on my laptop and I don't know what to do about it.
I've deleted about 20gb over the past few weeks/months, but every time I do so my hard drive manages to refill itself for no apparent reason.
For example, last night I was down to a few hundred mb, so I managed to clear about 2.5gb of unused files but for some reason I only have 1.2gb now.
Every time I go online (google chrome) and have more than one tab open it crashes. Crashes sometimes just on one tab.
Last week I had over 10gb of available space and it was still coming up with the same warning.

The troubles seemed to start shortly after installing Flux justgetflux.com... but I'm not sure if that is the culprit or conicidence

It's starting to annoy me now so any help would be much appreciated.

What is your laptop specs, cpu, ram, hd size. Sometimes my google chrome uses up to 2gb of ram at a time. depending on what im doing, what tabs. It leaks memory as well so if you keep chrome open too long it just keeps building up. Download CCleaner, run it, run some virus scans. It is possible you downloaded some malware when installing that f.lux program
edit on 17/12/14 by AzureSky because: (no reason given)

I would suggest backing up everything to external sources and removing any programs you no longer use or need.

A good defrag will not hurt either.

posted on Dec, 17 2014 @ 11:50 AM
link
Many times, taking an error message straight to a search engine will turn up a solution fairly quickly...

"Your computer is low on memory" - Google Search

F.lux makes my mouse stutter, makes my computer slow, and doesn't seem to change my colors at all.

Most problems like this can be fixed by updating your video drivers.

Use Safe Mode if you think f.lux slows down your computer.

In my opinion there's nothing to suggest that f.lux is actually a trojan but the earlier version was AFAIK only available as a beta and was well-known for causing issues like slow downs and freezing...

posted on Dec, 17 2014 @ 12:16 PM
link
Low on memory has to do with how much can be used at any given time. If you have a lot of open tabs that uses a lot of RAM. Or some software will use a lot of RAM. But when your hard drive fills up with a bunch of software, along about 10% of storage space left. Your computer will start acting stupid. Like telling you there is not enough memory left. Backup your documents, and photos files to another hard drive. Then do a clean install. Install only files that you use such as documents and photos. Reinstall antivirus, and malware protection. Reinstall software that you know is clean. Never install software that has not been scanned for viruses.

Adding additional memory is actually one of the easiest upgrades one can do and many times can make a huge difference in speed.

Crucial's system scanner is great for this: www.crucial.com...

This is an example of what the tool will tell you: 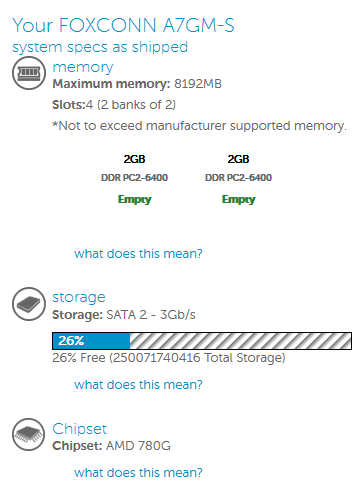 Model name and #, size of the hard disk drive.

How much RAM does the system have and what operating system (XP, 7, 8 etc.)?

To check the amount of RAM you have installed in W7, follow these steps:

1. Click on the Start button (lower left corner of the Taskbar)
2. In the menu that opens, right click on Computer
3. In the subsequent short-cut menu, click on Properties
4. Look at Installed memory (RAM) under the System section

There are many online resources that can help with your problem and can provide useful tutorials.

For starters disabling all non essential start up applications can increase boot speed, and a healthy registry can iron out the kinks in the system. There are also programs like Ccleaner that are more effective than your recycle bin and do a great job of taking out the the trash.

posted on Dec, 17 2014 @ 12:41 PM
link
Sounds like the low MEMORY error. That means the amount of RAM you have is being used up. You can clear your hard drive all day but it won't make the RAM any bigger.
To use the built in utility, click the start orb and type " cleanmgr.exe ". Run it as administrator.
Don't worry about a reinstall yet. Troubleshoot it. First what are your specs? Hardware and Operating system.
Do a Ctrl Alt Del and bring up the task manager. Click Process. You should have a column for memory. (either working set or private working set) sort by that and you can tell what program is using whatever amount of RAM you have.

If your memory is being used by a bunch of chrome.exe *32 you will need to activate the separate built in task manager for chrome. Right click chrome in the tab area and select task manager. Now it will show you how much RAM is used for each tab and extension.

Download malwarebytes and have it do a full scan if you think it is a malicious program.

If ever you can't do this is because you are out of hard drive space which doesn't seem the case from what you described.

posted on Dec, 17 2014 @ 01:00 PM
link
A program with a memory leak increases its ram usage over time, as it loses its space assigned by windows and asks for more.

Indeed after the ram is used up, Windows assigns infinitely rising disk space and sadly removes roll back restore points.

With the help of the task manager or previously mentioned programs for invisible programs you can see which has an enormous amount (over 1000 MB on 1 program) or increases over time.
Windows key + R, msconfig, Startup and Services to disable (use with caution, don't disable drivers or windows services).

This can also be caused by a memory leak from windows or a file expansion addition from another program. This happened to me more than once. When you are in a folder with certain movie files or have them on the desktop, a memory leak can happen until the specific quickly filling process is killed manually.


2.5 GB free space really isn't enough, though.
If you have below 2 GB ram on win 7 or below 1 GB ram on XP it would be no wonder it uses the hard disk instead.
Also, Windows 7 keeps patching up and grows from both the patches and bad programming by itself.
edit on 17-12-2014 by oneoneone because: (no reason given)

posted on Dec, 17 2014 @ 01:30 PM
link
I've seen people make this mistake numerous times. The amount of hard drive space and the amount of RAM you have, which is basically the memory you are using to run the operating system and the software within, are two completely different things. The only time they really overlap is when it comes to swap space. It seems to me that you likely have all kinds of programs running, whether you realize it or not, and this is eating into your memory. Do you use anti-virus software? Run a system check to make sure that there are not any malicious programs eating up memory. Then you should see what programs are opening at startup. I dont' use Windows, but I assume that is what you're using, so I don't know how you would go about this on your operating system, but finding this out is easy using google.

Also, pull up your system monitor to see what all you have running in the background. This should tell you what is eating up all your memory, just look at the amount of memory for each program, and see which has the biggest number or highest percentage next to it. Then see if those programs are opening on startup, like I said earlier, and uncheck the box beside them, if they are not critical system components. If they are eating up a lot of memory then they likely aren't system components, although it is theoretically possible. If you don't know what something is, just google it to see if it has to be running, and what it affects. You should also be able to kill non-essential programs running in the background, if you see that they are not critical system componenets. Again, I'm not sure how to do it with Windows, but on my system I just use the killall -name/process # command. There is probably a gui way of doing this on your system. So first run anti-virus, then check your running processes to see what is eating up your memory. Then, make sure to take out non-essential startup applications that are running in the background.
edit on 12/17/14 by JiggyPotamus because: (no reason given)

posted on Dec, 17 2014 @ 01:51 PM
link
I'd suggest uninstalling all unneeded applications. Run Malwarebytes to clean up the computer. Then Defrag your hard drive and reboot. If the problem still exists you need to upgrade the amount of RAM you have.

originally posted by: nonspecific
If it's an older model and it soulds like it is it might because of virtual memory.

I would suggest backing up everything to external sources and removing any programs you no longer use or need.

A good defrag will not hurt either.

If you mean page file then it would say page file in the error. Not low on memory.

Defragging does NOT reclaim any space on a hard drive.

posted on Dec, 17 2014 @ 02:54 PM
link
Download ccleaner and let it have a look over your drive and see where the crap is hiding, but low memory messages is about the actual RAM usage of the system not the actual space on a hard drive, there is an ability to page memory onto hard drives to allow things to run but these days most people have enough to run windows fine, the problem is that the finer points of finding out whats causing the problem are hard to teach as it depends from machine to machine, my general advice would be backup all your important data and then reinstall the os/applications etc and finally your files

Its maleware. Its lying. Its installed in secret on your stuff. Run Malewarebytes(free version) and any other good virus software.

This is very old and one of just many...another irritating one is PC HEALTH. These all get buried where you cant see them...and have a code to reinstall elsewhere on your stuff should you delete it.***


***QUIT DELETING YOUR STUFF...(unless you want to.)...Its a trick! Oh...and CHECK your memory levels in storage and RAM to see if its really true (It most likely wont be)
edit on 07-31-2014 by mysterioustranger because: (no reason given)

A Virustotal scan shows it as being clean...

In my opinion there's nothing to suggest that f.lux is actually a trojan...