posted on Dec, 16 2014 @ 02:07 PM
link
A new paper published today in Science reveals that measurements taken with Curiosity's tunable laser spectrometer (TLS) over a 20-month period show episodically fluctuating levels of methane in the Gale Crater, indicating a source of methane not accounted for in the predictive models. 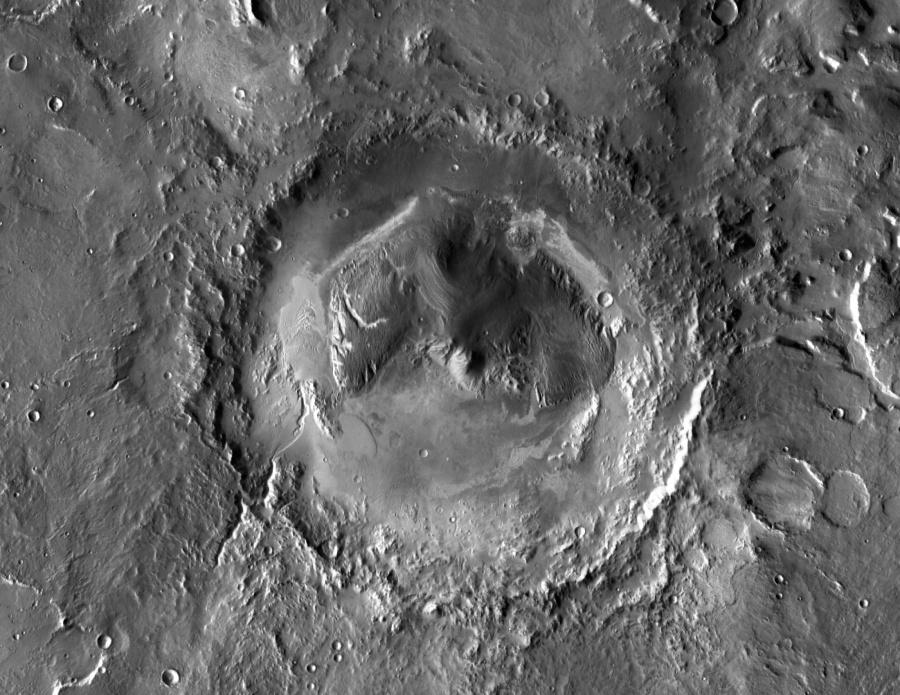 Readings from the rover found methane levels to be around half of what scientists had expected, based on all the natural processes that should be creating methane on the surface.

But periodically during their 20 month observation, the NASA scientists saw methane levels spike by an order of 10 -- sometimes in as little as 60 Martian days (just over two months on Earth).


That probably means that it's being vented out somewhere near the crater, then quickly dispersing. It's likely that some process beneath the surface -- whether it's biological or geological -- occasionally floods the Gale Crater with methane by burping it out. Then the winds of Mars scatters the gas, and UV radiation destroys much of the methane.

edit on 2014-12-16 by theantediluvian because: corrected: abstract indicates spikes are episodic not periodic

Here goes yet another link with a somewhat comprehensive summary:
Methane 'belches' detected on Mars

So what's the reason for these occasional high levels of methane? Underground reserves? Present (microbial) life? Remnants of past activity released through fissures? Geochemistry? Difficult to say, but I'm definitely looking forward to what others on here have to say!

posted on Dec, 16 2014 @ 02:20 PM
link
Sorry to use Wikipedia as a reference source here but I think for the purposes of the information it works.

It has often been discussed that life on Mars would be in the form of extremophiles... of which the methanogen is. Plus it can live in solid rock according to the Wiki source.

Interesting but by no means an answer!

Was just reading about this here: www.telegraph.co.uk...


I think it may have "formed" above ground in Mars' wetter, warmer past (when Mars had oceans and a thick atmosphere), finding its way to all parts and depths of the planet, just as life on Earth has found its way to all niches.

However, as the planet lost most of its atmosphere and surface water, only the underground life may have continued to survive -- where it may still survive today.


Lostbook --
I was just re-reading your post, and I realize I misread it. For some reason I thought you said your belief is that life on mars "formed" underground, hence my post above.

Sorry for the misinterpretation!

Having said that -- I agree with you (at least I believe the potential for underground life is certainly there).

posted on Dec, 16 2014 @ 05:49 PM
link
Pretty indicative of life... but not definitive. But it does add to the likelihood ...with the two (or is it three now?) meteorites from Mars with very possible fossils, the Viking test being positive for life according to the guy who designed it, etc.

Even if the methane isn't coming from a biological source, some other plausible alternatives such as serpentinisation or iron oxidation could point to the presence of liquid water beneath the surface, possibly in aquifers. 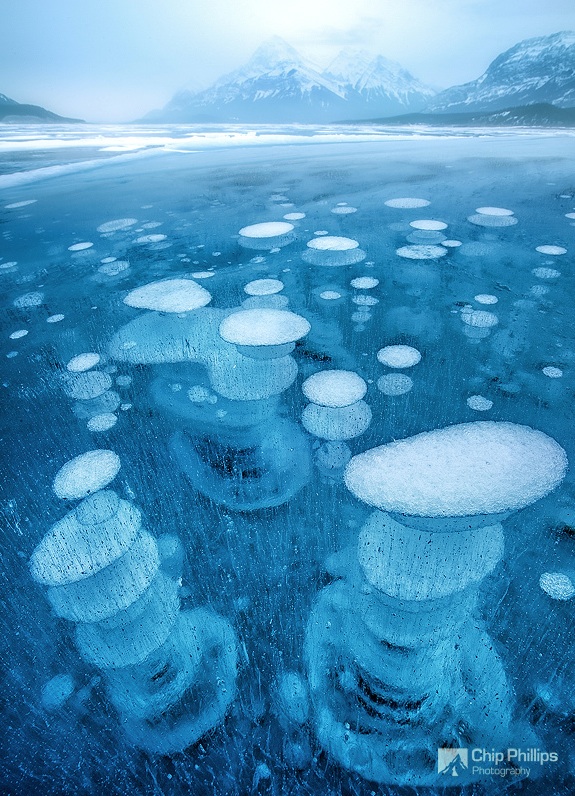 (any excuse for a cool picture )

This gives some idea of potential sources:
www.dailymail.co.uk - Do we finally have proof of life on Mars? Unexplained methane 'burps' suggest bacteria is living on the red planet...


...
The low background level of methane detected by Curiosity can be explained by the sun's rays degrading organic material possibly deposited by meteors, said the Nasa scientists.

But the spikes of methane required an additional source, which was unlikely to be a recent impact by comet or asteroid.

Such an object would have had to measure several metres across and would have left a large crater - no sign of which was visible.

The short time-scale of the methane spikes did not suggest that the gas was released from volcanic deposits trapped in ice, called clathrates either. Nor did it appear to come from the release of gaseous methane that had become bound to the soil.

The Nasa authors are cautious about jumping to conclusions, but conclude that 'methanogenesis' - the formation of methane by microbial bugs known as methanogens - may be one answer to the riddle.
...

Cool pic, indeed! Meanwhile, NASA/JPL managed to summarize the possible causes in a kind of infographic: 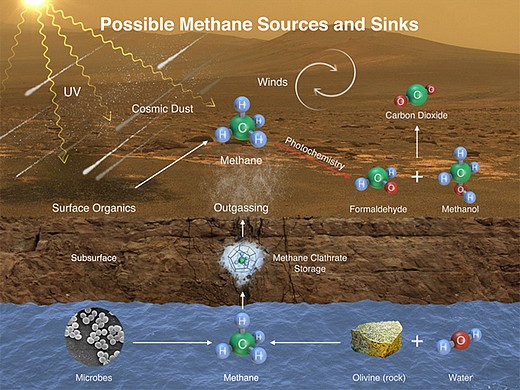 The above image is part of the recent press release. Obviously, the involved scientists are not yet excluding a microbial cause for the measured methane ... so let's keep our fingers crossed!

There is more exotic life on earth, why do microorganisms on Mars make you happy?

Sure, its life. if the reason.

but not the extinct civilizations people have fantasized about all this time...

Every planet has a potential to support life, in some form.. extremophiles give us that reasoning. But not necessarily evolved and intelligent life, which is what the whole fracas is about. more.. well bugs, who have been bugs for billions of years.

originally posted by: sn0rch
There is more exotic life on earth, why do microorganisms on Mars make you happy?

Because if there is life on Mars (any life at all), and if that life could be shown to have its own genesis (i.e., not seeded from Earth or vice versa), then that may speak volumes about the ubiquity of life in the universe.

That is, if life had two separate and independent beginnings on two planets next door to each other, then that suggests that the genesis of life elsewhere is an extremely common thing.

It's one thing to say that there must be life elsewhere in the universe because the universe is so big. However, if we then introduce the idea that not only is the universe so big, but it also seems the genesis of life may be a very common thing, then that really changes the landscape of how we look at the potential for other places to have life.

posted on Dec, 17 2014 @ 10:13 AM
link
I am still in the camp of thoughts that there WAS life on Mars and there still possibly IS life on Mars, though I am thinking the current life is possibly microbial. I think the past life on Mars, was possibly humanoid. I have been reading comments from a Dr. John Brandenburg Ph.D who has been studying the Cydonia plain area including the famous Mars face, and he has concluded there was no reason to think they were artifical. He has a background in atomic weapons research and he is thinking isotopes in the Martian soil and atmosphere suggest that a huge nuclear explosion one which was capable of wrecking the entire planet took place in the northern hemisphere of Mars millions of years ago. I find this fascinating, and am open minded of all the possibilities for this type of thinking.

posted on Dec, 17 2014 @ 03:05 PM
link
The question-- is Mars' methane due to living things, or merely geology? May be answerable. Methane produced by life should have much more carbon 12 relative to carbon 13 than if it came from the decomposition of minerals. A mass spectrometer is needed to check these isotope ratios.
Fortunately, the Curiosity rover has such an instrument. The detection of methane we are now hearing about was done with a different instrument, so the question must remain unanswered for the moment.
At only 7 parts per billion, let us hope there is enough methane for the mass spectrometer to work with, so that it can be used to tell us if there is life on Mars.

posted on Dec, 17 2014 @ 04:37 PM
link
The next rover being sent to Mars, Mars 2020 will likely seek an answer to the question of where the methane is coming from if we do not figure it out from data Curiosity has collected/is collecting.
edit on 17-12-2014 by JadeStar because: (no reason given)


We can not, of course, move Mars to a warmer orbit. However we do know another way to heat a planet, through an artificially induced greenhouse effect that traps the Sun's heat within the atmosphere. Such an atmospheric greenhouse could be created on Mars in at least three different ways. One way would be to set up factories on Mars to produce very powerful artificial greenhouse gasses such as halocarbons ("CFC's") and release them into the atmosphere. Another way would be to use orbital mirrors or other large scale power sources to warm selected areas of the planet, such as the south polar cap, to release large reservoirs of the native greenhouse gas, CO2, which may be trapped their in frozen or adsorbed form. Finally natural greenhouse gases more powerful than CO2 (but much less so than halocarbons) such as ammonia or methane could be imported to Mars in large quantities if asteroidal objects rich with such volatiles in frozen form should prove to exist in the outer solar system.

Each of these methods of planetary warming would be enhanced by large amounts of CO2 from polar cap and the soil that would be released as a result of the induced temperature rise. This CO2 would add massively to the greenhouse effect being created directly, speeding and multiplying the warming process.

Let's Americanize Mars! The Red White and Blue planet part duex. We shall rule the galaxy!

originally posted by: JadeStar
The next rover being sent to Mars, Mars 2020 will likely seek an answer to the question of where the methane is coming from if we do not figure it out from data Curiosity has collected/is collecting.


Further inquiry reveals that Curiosity's mass spectrometer can not do isotope analysis at methane levels below tens of parts per billion. So, unless a much larger burst of methane comes along, it looks as if the Mars 2020 mission is the best hope for resolving the source of the methane.

posted on Dec, 18 2014 @ 03:09 AM
link
Whatever the situation on Mars is today with respect to life, I would have loved to be able to see the planet a long time ago when it apparently had a thicker atmosphere, and liquid water on the surface. I bet it would have been beautiful.