Defending this kind of government behavior may be a habit many conservatives have fallen into, but it does not reflect an authentically conservative habit of mind. Imagine a liberal defense of Gruber on the grounds that health care is, like fighting terrorism, a life-and-death matter. Indeed, if history is any guide, cancer and heart disease are far likelier killers than even the most ruthless terrorist cells.

You don’t have to imagine such defenses, in fact. They’re made routinely. Republican opposition to Obamacare’s Medicaid expansion has been equated to killing, since health coverage saves lives.

The conservative response would be that the morality, legality, and efficacy of policies aimed at increasing health coverage matter, and the benefits must be weighed against the costs, even if all our allies have single payer.

That same reasoning should apply to dealing with terrorism, even if all our enemies torture.

The defense that terrorists use torture is so it's okay, is ridiculous. Aren't we supposed to be better than them? Aren't we hunting them down because they're such horrible people?

Okay but beyond that, let's think about everything that has gone into our 'Enhanced Interrogation Program'. Several black hole sites, who knows how many and where, how staffed they are with both CIA and military for security plus doctors and private contractors (private defense contractors should scare the crap out of all of us). Then there's all the laws that have popped up, new laws, modifying old laws and with ever increasing provisions that can be applied to Americans. Detention without trial was bad enough, we should have put our foot down and got that tossed out 10 years ago. We should have been vigilant, we strongly suspected this was happening... some were, but not enough. Now we know.

So exactly how much are we going to let the government grow in order to feel safe? 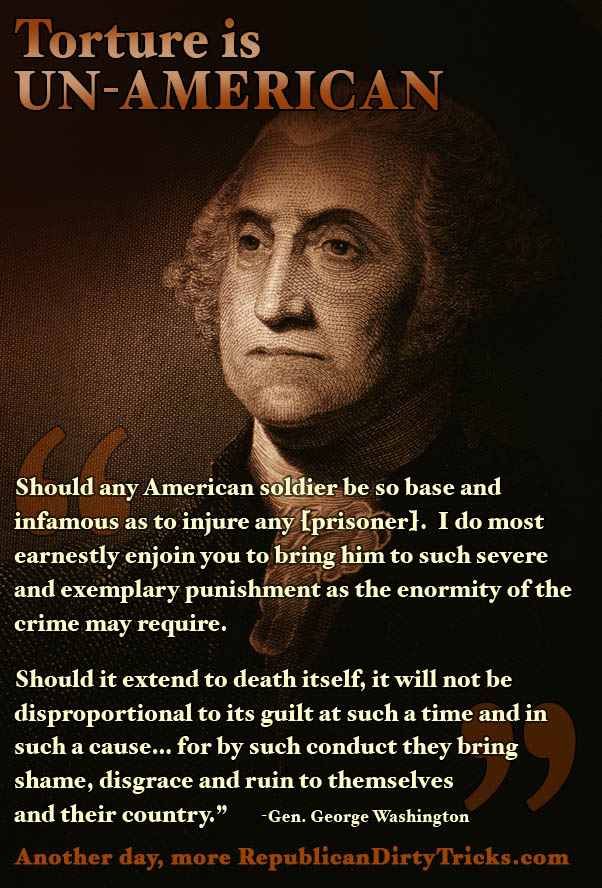 Sorry for the bottom part.

Not that I am disagreeing with your post! But as I learned just the other day, whether true or not, from Washington's quote, is that it referred to Indians and Canadians!

Should any American Soldier be so base and infamous as to injure any Canadian or Indian, in his Person or Property, I do most earnestly enjoin you to bring him to such severe and exemplary Punishment as the Enormity of the Crime may require. Should it extend to Death itself it will not be disproportional to its Guilt at such a Time and in such a Cause

I as you Kali, did some digging on this, and even though, according to this article, the quote is taken out of context, I do believe it would still apply!

OH, how bout that! Seeker, even reads articles, from The Daily Kos!! Good article regardless!

But, after 911 people lost their minds.

I was right there with them.

I don't think Political Parties had much to do with it.

I just (and still do) wanted revenge.

Defending this kind of government behavior may be a habit many conservatives have fallen into, bu

What a load of bull snip.


In the United States President Clinton authorized extraordinary rendition to nations known to practice torture, called torture by proxy.[2] Under the subsequent administration of President George W. Bush, the term became associated with transferring so-called "illegal combatants" (often never charged with any crime) both to other countries for torture by proxy, and to US controlled sites for a torture program called enhanced interrogation.[3][4][5][6] Extraordinary rendition continued with reduced frequency in the Obama administration: those abducted have been interrogated and subsequently taken to the US for trial.[7][8]


The Program was designed to identify and "neutralize" (via infiltration, capture, terrorism, torture, and assassination) the infrastructure of the National Liberation Front of South Vietnam (NLF or Viet Cong).[2][3][4][5] The CIA described it as "a set of programs that sought to attack and destroy the political infrastructure of the Viet Cong"

Had no idea that Johnson,Clinton, and Obama were 'conservatives'.

The article doesn't state that it's a Conservative thing but that to defend torture is pretty much not being Conservative.

What about our founders idea of torture Neo?

I love the Constitution, with or without the ideology of Republicans OR Democrats!

We can't have it both ways!

Right now we have those who want to end our sovereignty by ending the Constitution or changing it.....

I prefer to keep it and end the corruption that has made it look foolish!

Both spawned from Democrat controlled Government.


What about our founders idea of torture Neo?

They wouldn't have a problem with it considering what was done to the indians,and the African Aamericans,Chinese, Irish,etc.

Hell torture has been the GD American way for over 2 centuries.


What about our founders idea of torture Neo?

They wouldn't have a problem with it considering what was done to the indians,and the African Aamericans,Chinese, Irish,etc.

Hell torture has been the GD American way for over 2 centuries.


Gotta start making things right at some point regardless?

We should learn from history not repeat it?

posted on Dec, 14 2014 @ 08:55 PM
link
The US has a long and distinguished history of torture
From indigenous peoples to slaves to Vietnam and the war on terror m.theatlantic.com...

The question is how will you stop them?
PROTESTS,forums,all of these are nice to read about but deep in the black its a BIG laugh. As long as anyone is gunning for us we will use it wether in the WHITE or not.NOT taliking about WATERBOARDING as its also a training aide for SERE. I'm talking real blood ,murder, torture.
OH you can fool yourself as you want but the system is the same.

I don't much care who is doing it.

The fact is we have the issues we do because we have allowed the government to reserve for itself powers far beyond the constraints of the Constitution. If we continue down the path of ever growing government power, at some point, that power will be fully brought to bear upon its own citizens.

This is why it is paramount to address the issue of torture, ever expanding regulation of economic activities, gun control, prohibition, unrestrained foreign and domestic spying, and police brutality, we will continue to deal with a government that sees the citizen as the enemy.

posted on Dec, 15 2014 @ 11:24 PM
link
Like, every GD issue, conservatives are only against it when a democrat is doing it. Rape? Murder? Only if it's a democrat doing it. otherwise, if it's done by a republican they LOVES some good ol' rape and murder.

Some people call that "sh*t for brains."

No individual person on the face of the earth, committing any of the crimes related to this issue, for any reason, has a defendable leg to stand on (save mental acuity) - but somehow, countries partaking (or having partaken) in any of these activities, hasn't even plead insanity...