The fun thing about bushes and Cheney though is most of the right loaths them too!

posted on Dec, 14 2014 @ 02:29 PM
link
I'm interested in knowing what would you do in the same situation as Cheney? It is very easy to criticize when you have never been at the pointy part of the spear. Everyone condemns the action of Cheney during that time when we were attacked by a virtually unknown enemy that just killed 3000 Americans. How would you prevent another attack that may have killed even more innocent Americans?

I understand your moral outrage but war is a brutal event. The side that is unwilling to do all that's required is surely to be defeated. Faux bravery and moral outrage never won any war!

In the week after 9-11, our intel people was concerned about another attack was eminent on New York city. This time it was a nuke. Bush sent Cheney there to calm the local leadership. Luckily it never came!

How many of you would be brave enough to do that or even tell the truth about doing the same in the future? The thing that is a moral outrage to me is the number of people that are so foolish to think that any administration wouldn't do the same.
edit on 14-12-2014 by buddah6 because: (no reason given)

The fun thing about bushes and Cheney though is most of the right loaths them too!

It's our common ground

If my memory serves, the 'right' supported them hook, line and sinker before, during and after these policies became standard operating procedures.

I'd have used far more than 'water-boarding' if necessary....

The Kernel assumes that you are OK with the thought behind this meme then. 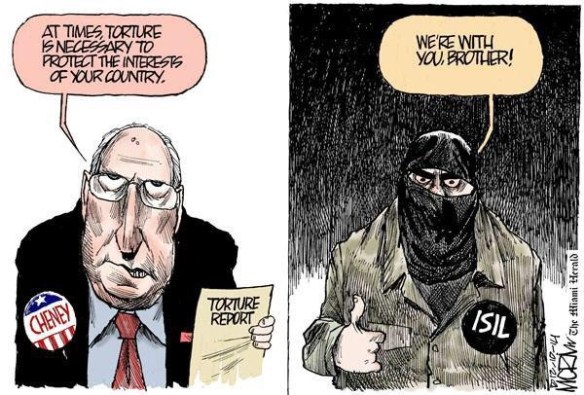 True, but more and more lost and are loosing the faith. How much support do you think Cheney would get on a presidential run these days? Some from the hard right I suppose but very little from the rest of us.

I lost faith in bush before his first term was up, lost it to the point I'll likely never vote for a republican again. Certainly not a bush.

U.S. Says Rendition to Continue, but With More Oversight


WASHINGTON — The Obama administration will continue the Bush administration’s practice of sending terrorism suspects to third countries for detention and interrogation, but pledges to closely monitor their treatment to ensure that they are not tortured, administration officials said Monday.


In the United States President Clinton authorized extraordinary rendition to nations known to practice torture, called torture by proxy.[2] Under the subsequent administration of President George W. Bush, the term became associated with transferring so-called "illegal combatants" (often never charged with any crime) both to other countries for torture by proxy, and to US controlled sites for a torture program called enhanced interrogation.[3][4][5][6] Extraordinary rendition continued with reduced frequency in the Obama administration: those abducted have been interrogated and subsequently taken to the US for trial.[7][8]

'Torture is bad,but they are still doing it ANYWAY!'

The current policy traces its roots to the administration of former President Bill Clinton. Following the attacks of September 11, 2001, however, what had been a limited program

You seem to believe everything you have heard from by the US government. Only problem is that it is know to lie, and often.

Well its a good thing that it's not really a big deal then.
Or barry might have a real scandal on his hands

Well its a good thing that it's not really a big deal then.
Or barry might have a real scandal on his hands


What did Bush ChenEy do that was any diifferent than those who came before?


Yeah we are extremely lucky we haven't witnessed a nuclear event in the name of 'Allah'.

posted on Dec, 14 2014 @ 03:12 PM
link
Yeah, as if torture wasn't used in other administrations (and this current one)? And as if the ones being tortured were beautiful human beings obsessed with the betterment of humanity....

To me torture is wrong no matter what. But this isn't exclusive to Bush. Now imagine what they don't tell the public.


Well then it is no big deal that barry is continuing to do it right?


Yeah we are extremely lucky we haven't witnessed a nuclear event in the name of 'Allah'.

This is just not true.
You can say it all you want but you would never be able to back up that what we did stopped a nuke from going off.

Actually it is a big deal since he and his party were doing it,a but it's only 'wrong' when the right does.

They went straight to Saddams wmds.

They did the same GD thing in Syria.

originally posted by: caterpillage
I'd like to see Cheney water boarded for a while, maybe get some answers about 9/11, amongst other interesting topics. Maybe a little scopolamine cocktail first.

You know, since he's into that sort of thing

I thought I had something to say, that was until read this reply.

Btw, there are a select few members who love Bush/Cheney and I expect they'll be here shortly to defend, misdirect, and argue to defend their honor. It'll happen, just wait. How anyone can defend this man or that administration only leads to a few avenues.
edit on 14-12-2014 by Swills because: (no reason given)

He'll go down swearing that he's not only right, but a visionary, and then his angry daughter (he seems to have one nonangry daughter, must be joy at holiday meals) will defend him. Even though torture is not the American way, doesn't work, and goes against all the U.S. stands for, Cheney has to defend his legacy as far as he can sneak it over an imaginary goal line.

Of course it's not a big deal. What with the partisan nonsense always demonizing the right, the internet shills jumping to shut down all criticism, the media cleaning up after him and the race card.

Nah, nothing's his fault. Any other pres sure but most certainly not "barry".