Warren or Sanders for Pres?

originally posted by: sheepslayer247
Neither, in my opinion.

I fear Warren would easily bend to appease the corporations, banks and power brokers in DC.

I don't know too much about Sanders, but I like his stance on a single-payer program. Not a big fan of his ties to unions though.

What we really need is someone from the Libertarian party to step-up and really put the fear of god in to DC.


I prefer someone with a tie to unions rather than Wall Street.
Are some unions corrupt? Yes. Organization of anything will inherently brew some corruption. Labor, religion, etc.
Libertarianism is too Golden Corral of an ideology. Didnt they get Bob Barr last time?

I think I'd rather write in Jeebus and his van. He is all about health care. He really knows his pharmaceuticals.


Eta: Golden Corral is an awesome place to see what 'Merica is all about. If you need a fat rascal to drive your fat up to the buffet, you shouldn't be at the buffet.
edit on 13-12-2014 by the owlbear because: (no reason given)

originally posted by: Bone75
a reply to: amazing

I really don't think it matters. None of them do what they say they're gonna do.

Woah. All this talk about a Sanders/Warren ticket got me so excited so I got proactive and made a campaign poster. I hope they'll like it! 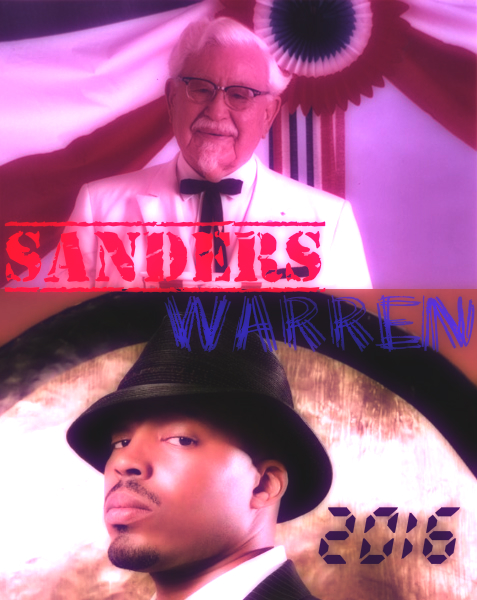 Sanders has been in the Senate for years, Warren recent.

What proposals have either of them made that would have any support?

originally posted by: xuenchen
What exactly would their platform be?

Sanders has been in the Senate for years, Warren recent.

What proposals have either of them made that would have any support?

After the last few neocons we've had in office we could use a little socialism.

posted on Dec, 13 2014 @ 02:00 PM
link
a reply to: FlyersFan
Richardson still has Clinton stank on him, it won't wash off no matter how hard you scrub. Bayh has the experience and is a generally likeable person, that's not a good thing for a politician. Presidents need dirt or what else will crappy late night comics make equally crappy joke about? Airline food? The DMV?

posted on Dec, 13 2014 @ 02:03 PM
link
In a fiery speech yestarday, Elizabeth Warren had much to say about a provision inserted into the CRomnibus spending bill. This provision once again puts the taxpayers on the hook for bailing out to big to fail banks.


The Citi-drafted legislation will benefit five of the largest banks in the country—Citigroup, JPMorgan Chase, Goldman Sachs, Bank of America, and Wells Fargo. These financial institutions control more than 90 percent of the $700 trillion derivatives market. If this measure becomes law, these banks will be able to use FDIC-insured money to bet on nearly anything they want. And if there's another economic downturn, they can count on a taxpayer bailout of their derivatives trading business

Citigroup holds several key positions including treasury and in the administration. This group lobbies heavily in the millions of dollars to enact and persuade its monetary policy and protection.


With Congress set to pass a government spending bill that weakens a provision of Dodd-Frank, Sen. Elizabeth Warren (D-Mass.) took the floor of the Senate on Friday evening to lash out at her colleagues. In her remarks, she took specific aim at mega-bank Citigroup, saying it wields unusual power in government and must be reigned in. "Many Wall Street institutions have exerted extraordinary influence in Washington’s corridors of power, but Citigroup has risen above the others," she said. "Its grip over economic policymaking in the executive branch is unprecedented."

posted on Dec, 13 2014 @ 04:53 PM
link
Nothing against either, but I am looking for a leader, someone outside the daily beltway influence...

I want someone who wants to get the job in ONE term, not look at it as an 8 year quest...

This person will be hard to find, since the mainstream and the money will keep them hidden, so it's up to the voters to be vigilant...

I have one from left & right so far... they are out there if you really want DC to change...

originally posted by: LeatherNLace
A Sanders/Warren ticket is something that I can certainly get behind.

originally posted by: AgentShillington
Jesus Christ, people! Are you kidding me?

Are we seriously debating which idiot from one of the two major parties should be elected to the presidency next?

Ummm, Sanders is an Independent.

Sanders is a god damned Democrat. You think the Democrats are going to give the chair of the VA to someone that they can't control? Please. Who does he caucus with? Democrats? Hmmm...

He does typically caucus with the Democrats but he is not a Democrat, he's a Democratic Socialist. Vermont is pretty unique.

posted on Dec, 13 2014 @ 05:10 PM
link
It'll be Biden as President with Obama as VP. Biden will fold/get ill a few months in and Obama will get his third term without having to undergo that pesky election

Warren has proven she can be a candidate for everyone already. She seems to rewrite her family history as well as her personal feelings on a monthly basis.

Elections are so much fun. We just finished one and we now have two whole years of "what ifs and propaganda" to wade through to get to the next election cycle. Can't we at least get a month break before we start posturing for the next "dog and pony show"?

He does typically caucus with the Democrats but he is not a Democrat, he's a Democratic Socialist. Vermont is pretty unique.

Yeah they have the "Democratic Farmers and Labor" Party in Minnesota, but Al Franken calls himself a Democrat. Watch who Bernie gets to support his run, if he does it, which is likely.

He's also said that if he runs he is going to refuse all Corporate money.

He's also said that if he runs he is going to refuse all Corporate money.

But he's already accepted corporate money to get where he is now. They already own him.


originally posted by: Kali74
a reply to: AgentShillington

I think I need to get Jeebus Christ to run.
He's cool just dont breathe in when he's speaking.
He said he would live in his van so that would save on white gloved black people serving dinner.

So now he is going to take money out of the mouths of poor folk just trying to make some cash serving the elite a 1,000 dollar plate of food?