Maps And Art of Middle Earth from Middle-Earth Role-Playing

posted on Dec, 8 2014 @ 12:07 PM
link
Middle Earth Role Playing, or MERP for short was a 1980's pen and paper role-playing game set in Tolkien's world, made by Iron Crown Enterprises under license until the late 90's. 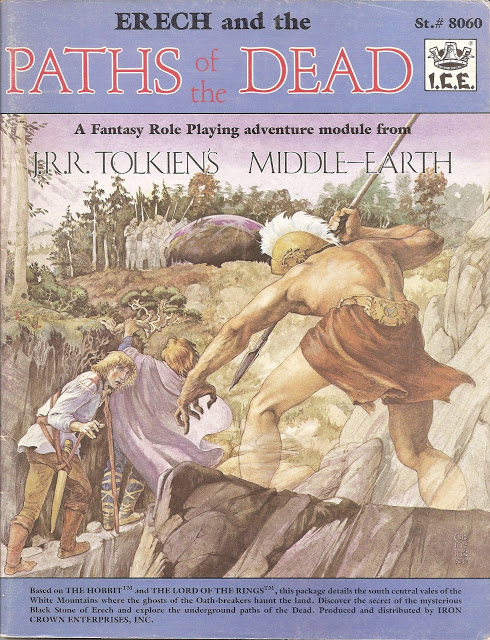 I played it quite a bit as teen, and loved the game. Then in my twenties i was part of a campaign to preserve the books as licenses were lost in run up to Peter Jackson's movies, and last played several years ago when i ran a bit of a campaign with some friends.

The game was notable for a few things; firstly and obviously it's setting and ability to make modules and adventures about places like Cirith Ungol, Moria, Mirkwood and Mordor. 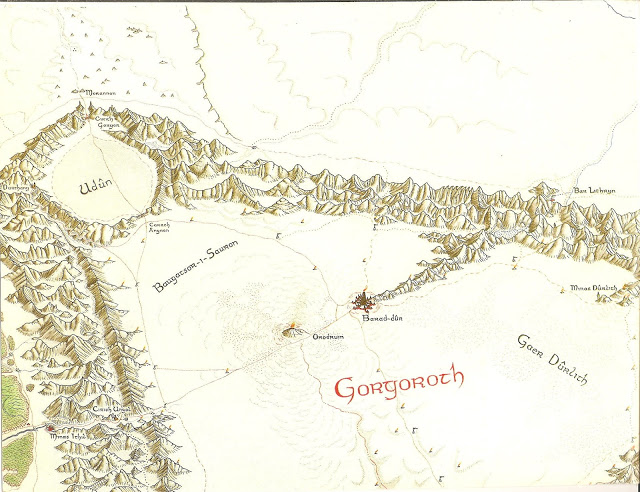 It also had a pretty amusing combat system that would give you graphic results for critical hits, like

Strike to head destroys brain and makes life difficult for the unfortunate fool. Expires in a heap, immediately.

for a very lucky sword strike, and


Chest strike destroys both lungs. Cut in half. Charge extends 10 feet giving an "A" critical in anyone in the way.

for an excellent roll with a lightning bolt.

But the favourite part for me was the art and the maps. Beautiful covers adorned the many Adventure and Campaign books, the first edition ones in particular. One of the frequent artists was Angus McBride, who is a wonderful artist and illustrator.. he did the most hilarious and gross "Dracula" book which i had as a kid, and is known to many as the illustrator in Channel 4's Time-Team. This is one of his: 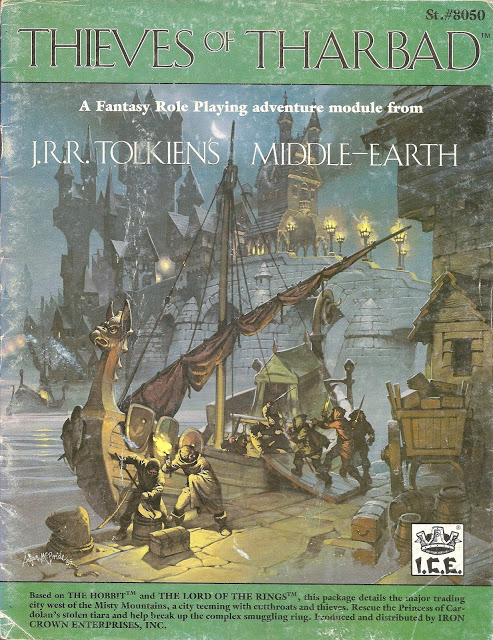 I found the others equally wonderful too: 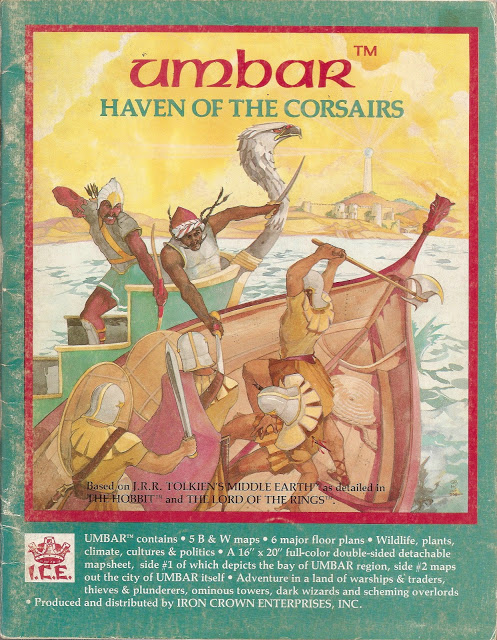 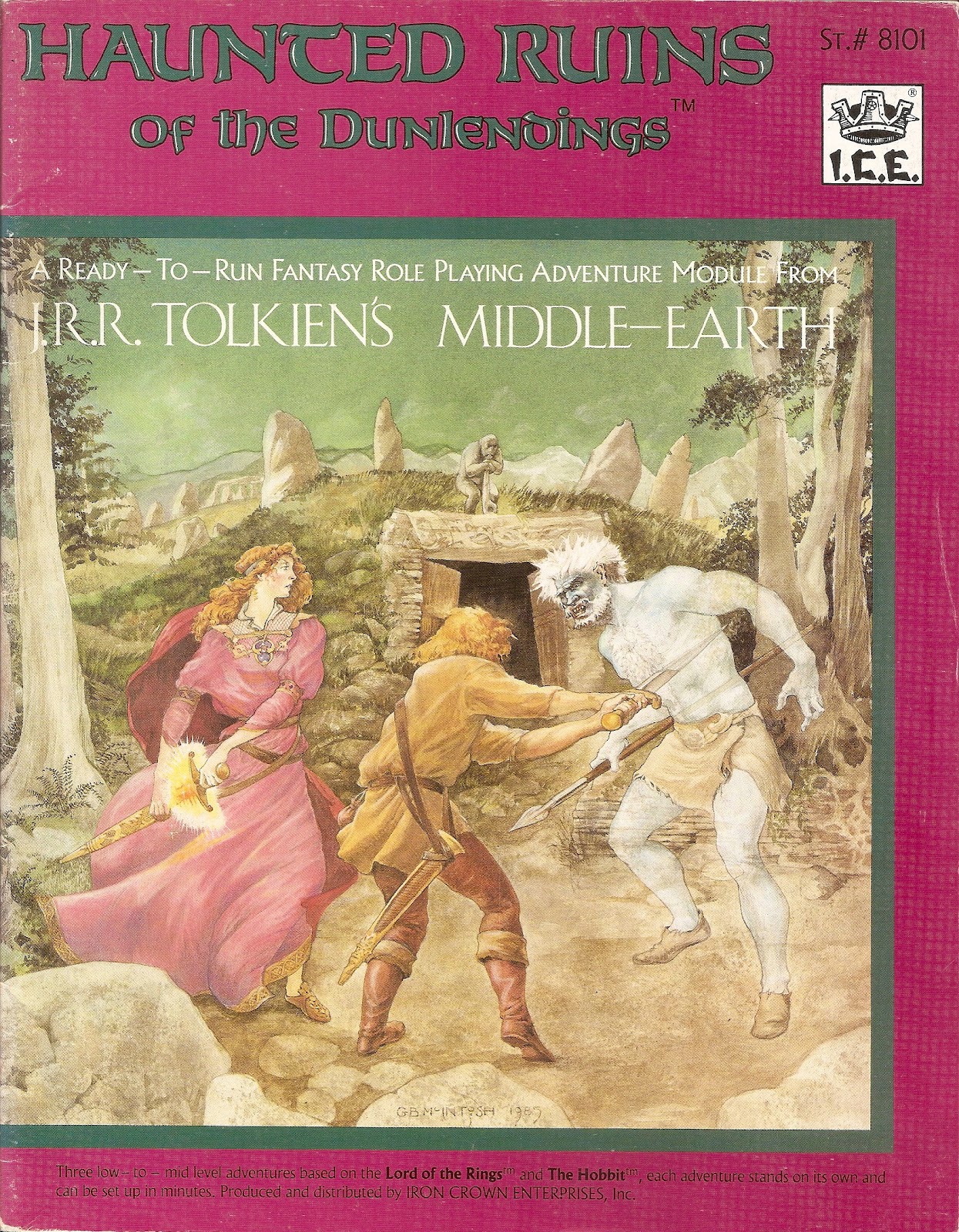 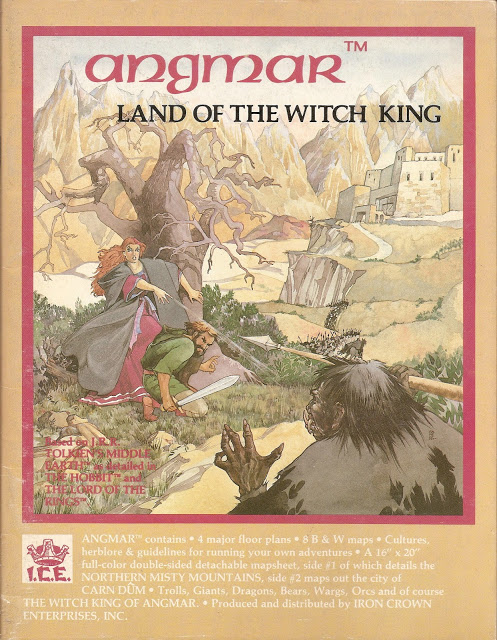 But the real thing of beauty was the the maps that they included.

They were beautifully drawn by Pete Fenlon in droolsome detail, he did all of western Middle Earth (the area featured in The Hobbit and Lord of the Rings), of course drawing from and adding to Tolkien's wonderful maps. Other areas that were never illustrated by Tolkien were also created, stepping off-piste as such for modules in places like Far Harad.

This map is for the area around the great City of Umbar, south of Gondor and Mordor, when the corsairs come from, ruled by the descendants of the Numenoreans who sided with Sauron. 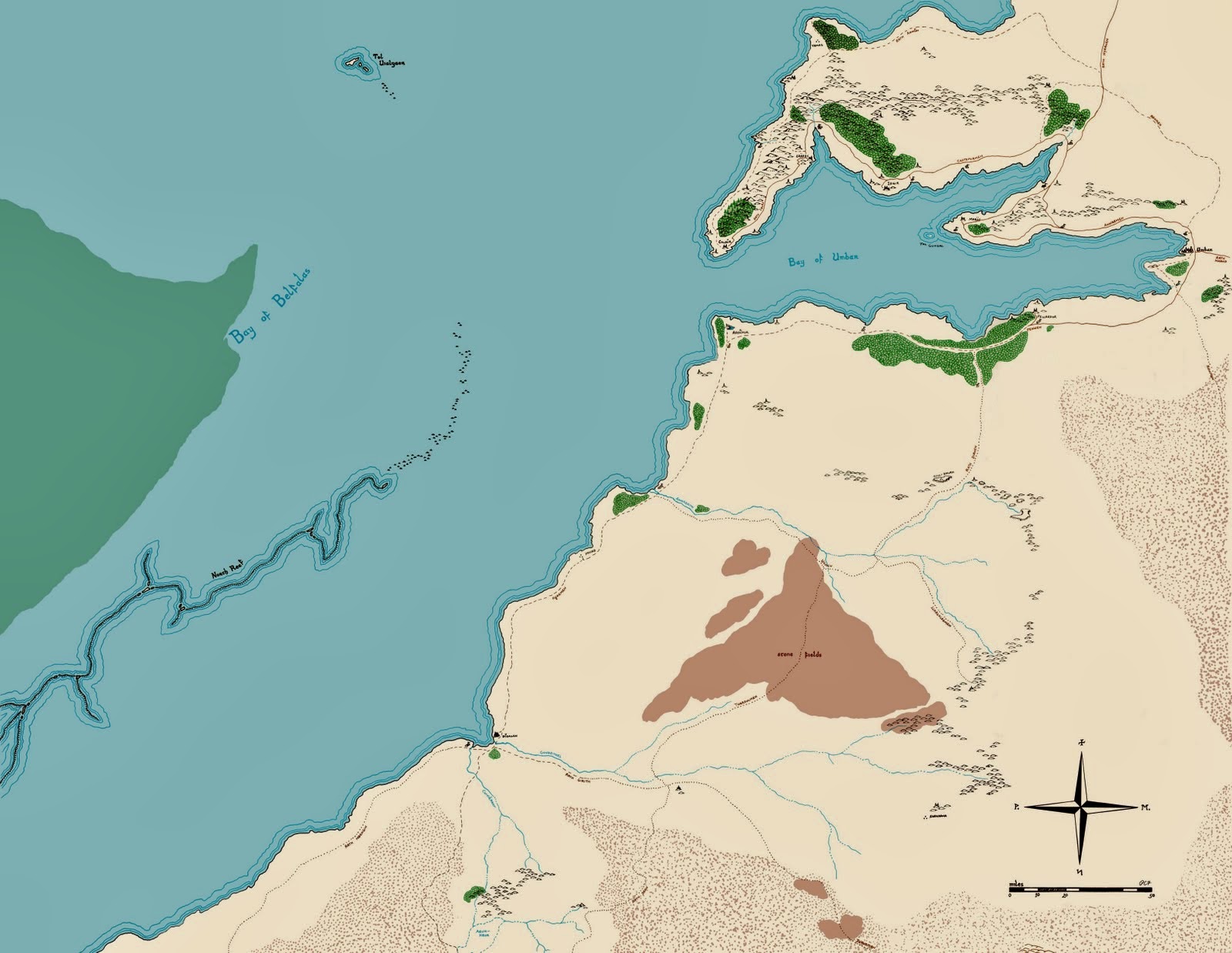 This is The Bay of Belfalas and the Isle of Tolfalas, in southern Gondor: 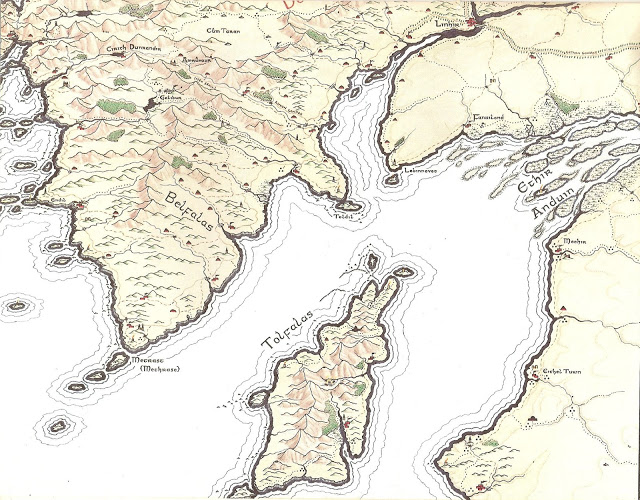 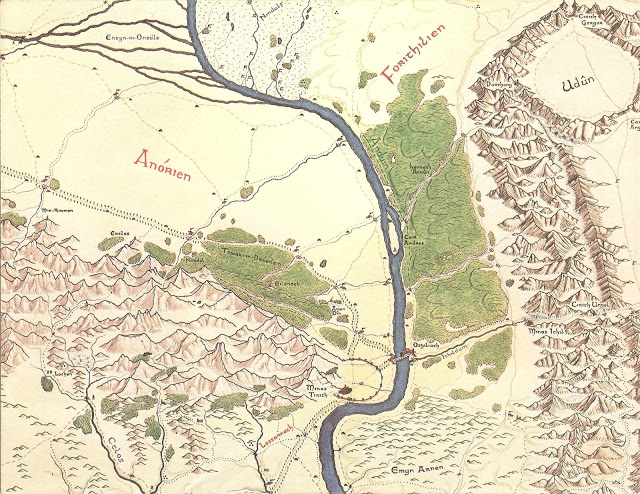 And the Mity Mountains, with Angmar, and The Eagle's Eyrie.. 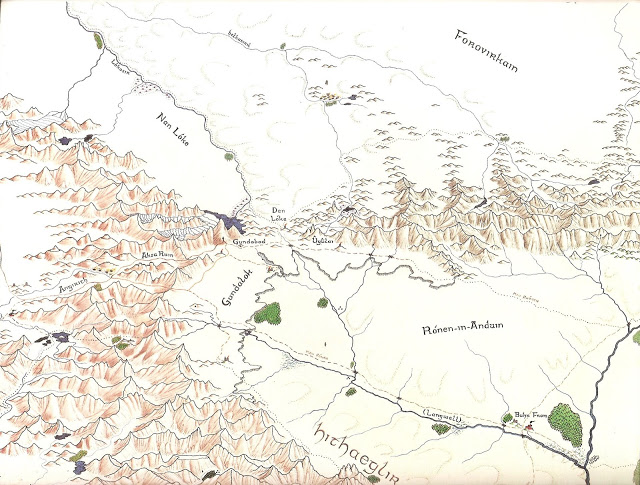 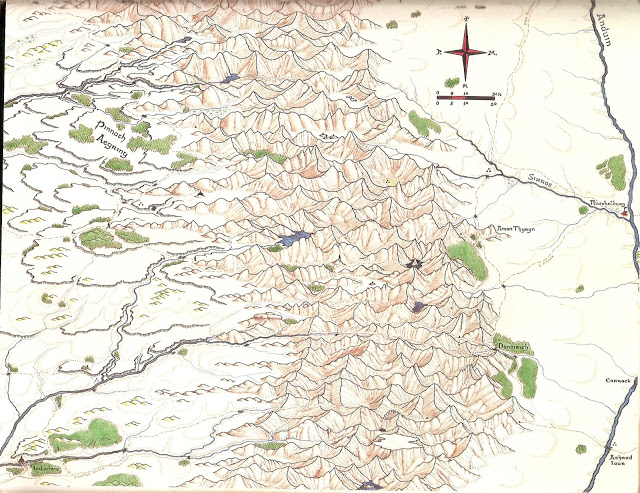 A map showing the location of The Paths of the Dead: 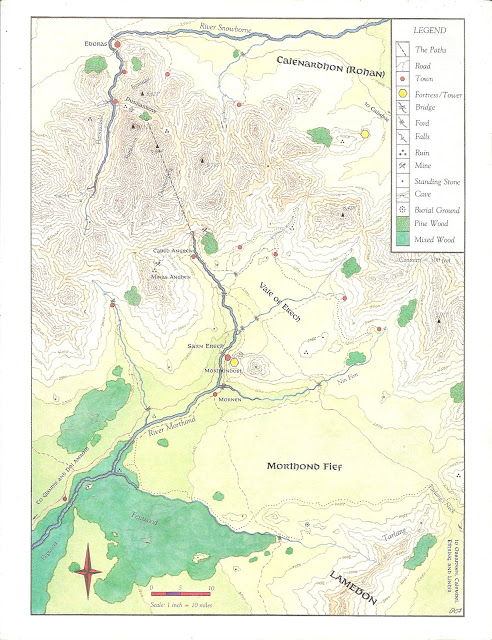 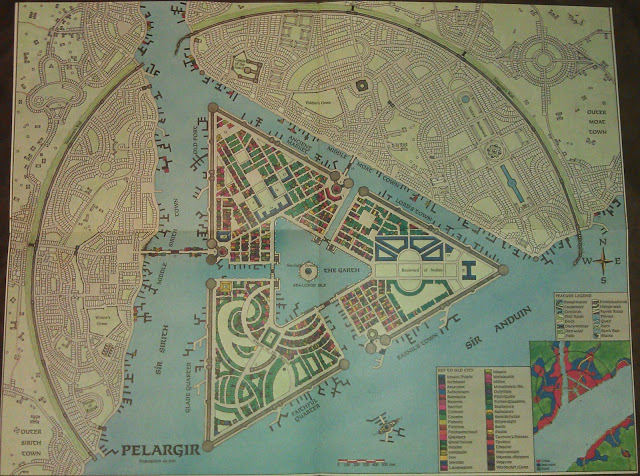 A lot of care went into their earlier books and they were simply gorgeous to own and read. Obviously floor-plan type dungeon maps were made for the various locations, like the Balrog's lair in Moria, caves in Trollshows, the homes of the Elves in Ost-in-Edhil where the rings were forged etc etc - they were a real labour of love. I will try to post some more pictures later, depends on what i can find online, as i don't want to break t&cs

I found a lot of the pictures at various pages on This Blog, but i have a full collection already, this was just a handy source for pictures, and i'm going to read it as soon as i've hit post

And for those interested in playing, or taking a nostalgic trip...i found a UK edition rulebook, available all legit:

and likewise, a couple of adventure modules too:

Weathertop, Tower of the Wind

Did any of you folk here at ATS ever play MERP? 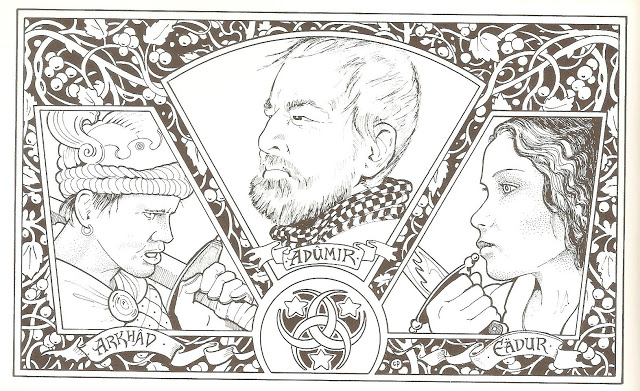 Those crit charts set the standard for awesome. Man, I just got d&d 5th ed. and here you've got me wanting to run a game from the 80s! Good on ya!

My pleasure! I haven't looked through my books for a few years so this was a nice jump back into some Tolkien/RPG geekery for me. The various books got very expensive on Ebay prior to the movies coming out as they got pretty rare, so a few folk "protected" them as such in internet land, but we cant talk about that

When I was a teen, I bought the Merp boxset and DM'd a little bit with my friends. A friend borrowed the set and I never got it back

So, for my 40th birthday present to myself I bought the rulebook off ebay (and several other cool things) and hope to play it again at some point

I loved the critical tables especially

And yeah...the artwork and maps are very cool!

posted on Dec, 8 2014 @ 05:08 PM
link
Man we gotta get together and play skalla
I loved merp some of the crit descriptions were funny as fick.
You anywhere near yorkshire dude?
I miss roleplaying so much.
Great artwork and great info on the background of middle earth.
Ever play cyberpunk 2020?
edit on 8-12-2014 by boymonkey74 because: (no reason given)

posted on Dec, 8 2014 @ 05:15 PM
link
The Module covering both Galadriel and Celebrimbor's Lorien, and The Halls of The Elven Smiths where The Rings of Power were forged: 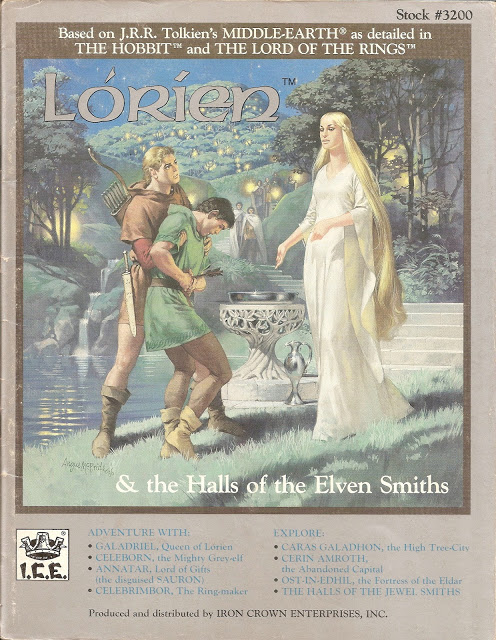 The map of the region, iirc showing how you would exit from Moria's eastern exit: 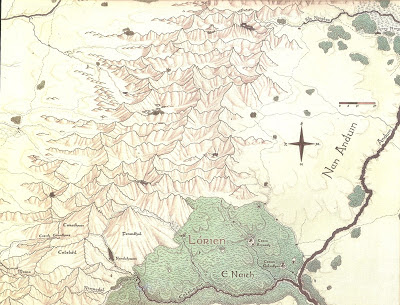 And Eregion, where The Gwaith i Mirdain (or Elven Smiths) lived at Ost In Edhil 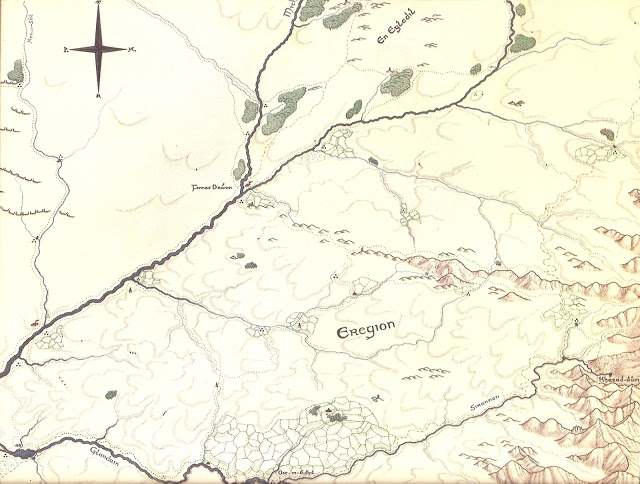 The Halls of the Elven Smiths themselves, "groundfloor" 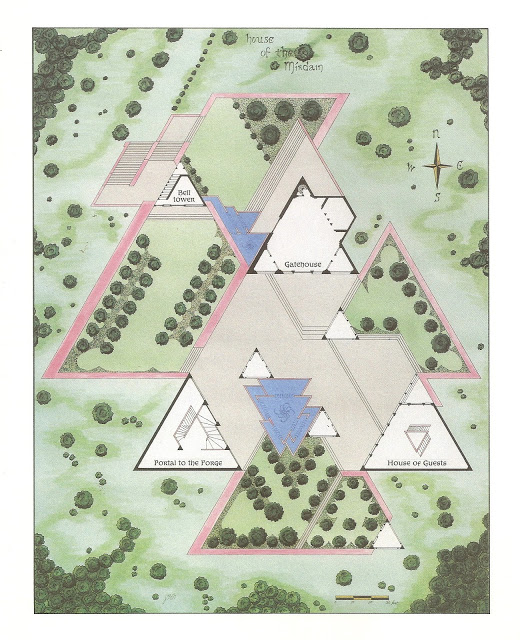 The Far Harad Campaign module cover, a desert land in the far south, ruled by one of the Ringwraiths 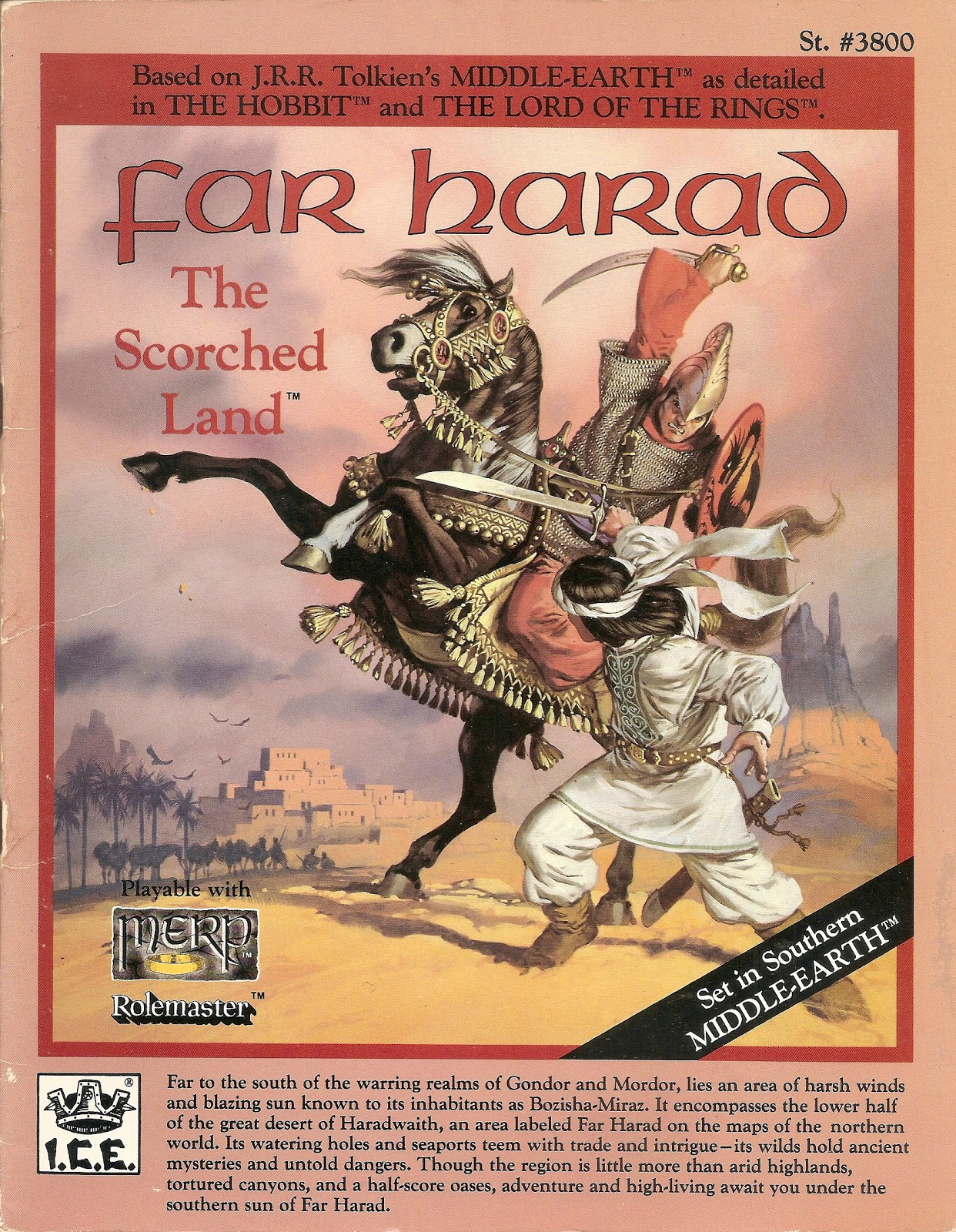 A Forest in the far south 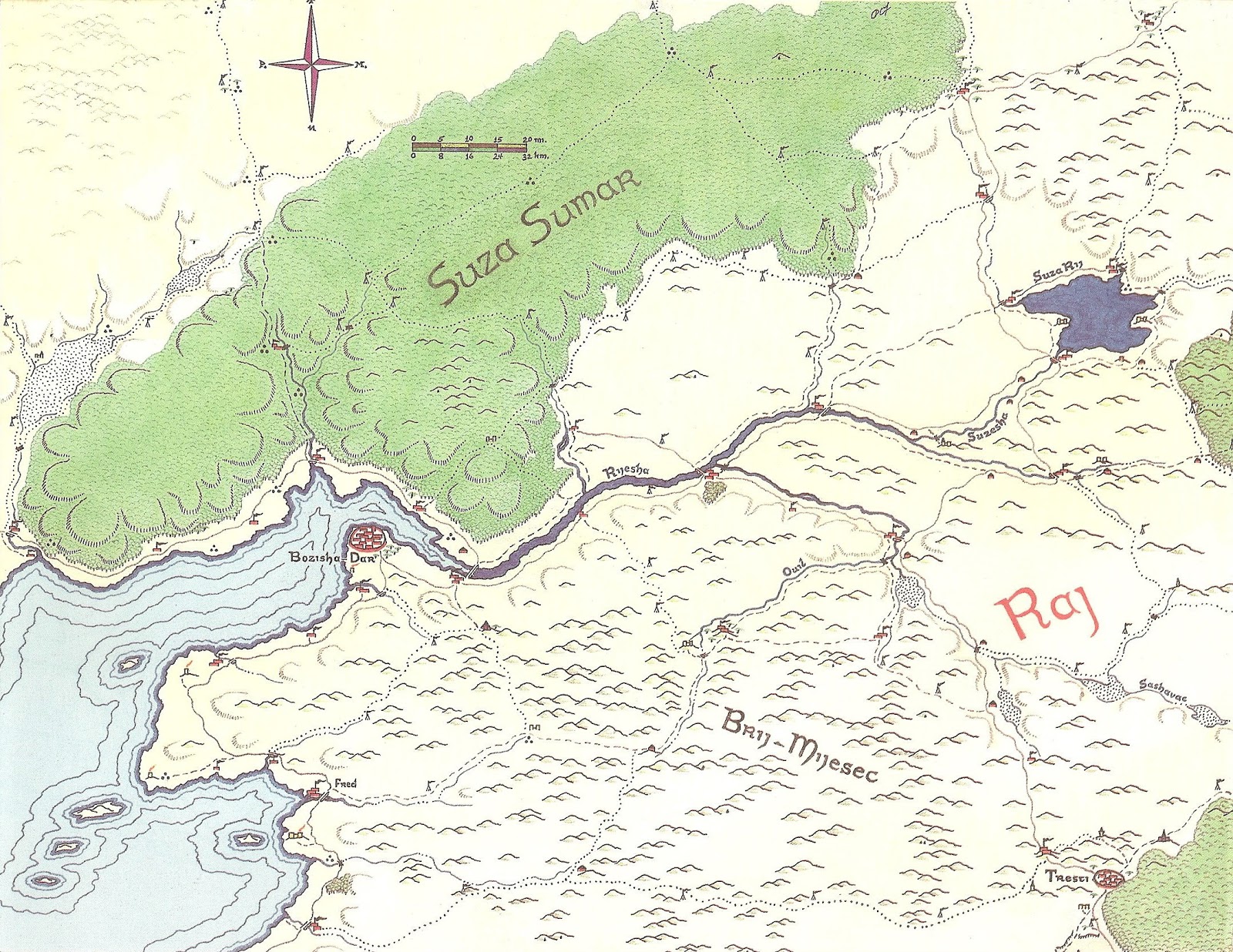 Pel, another kingdom in the far south 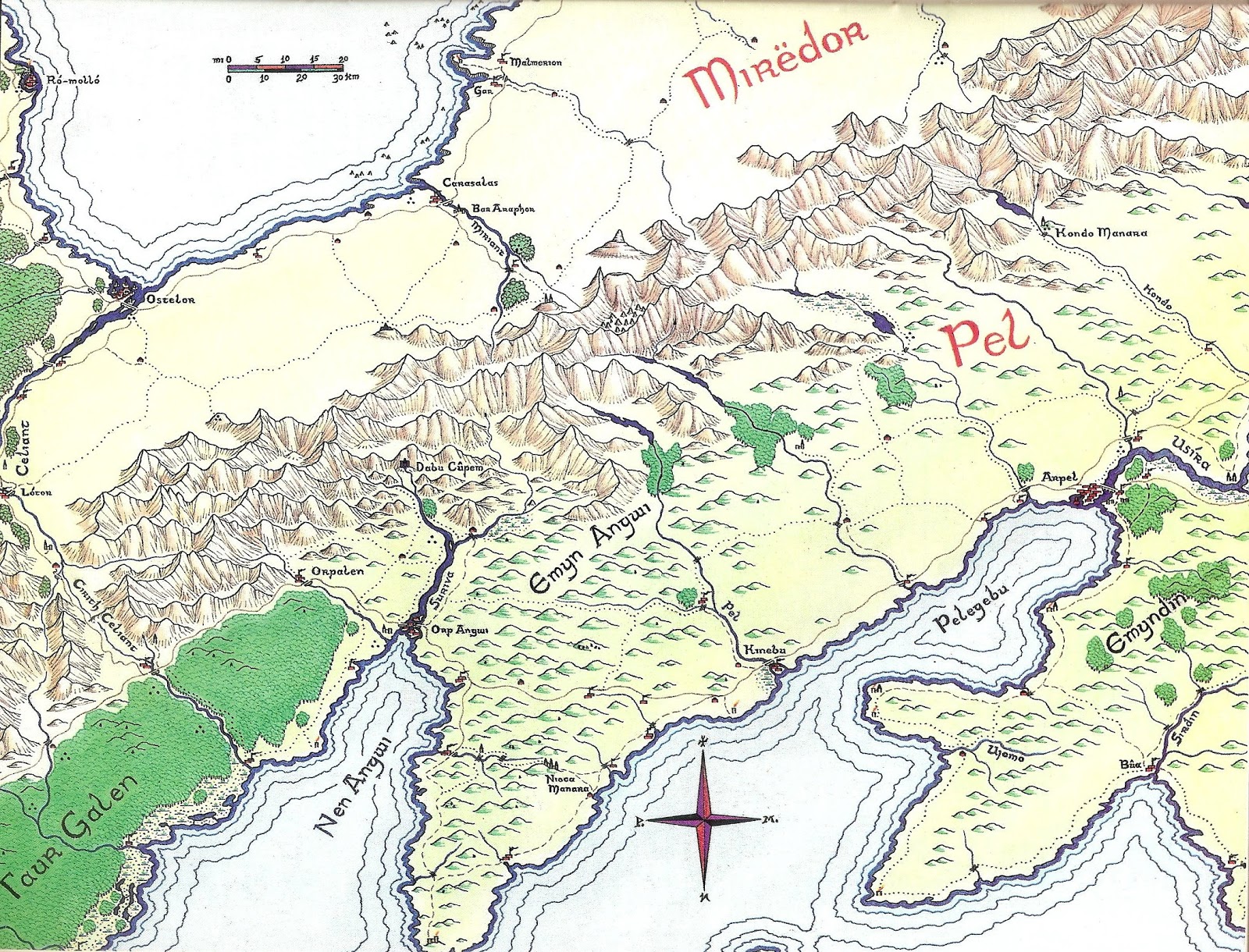 One of the traps in Moria: 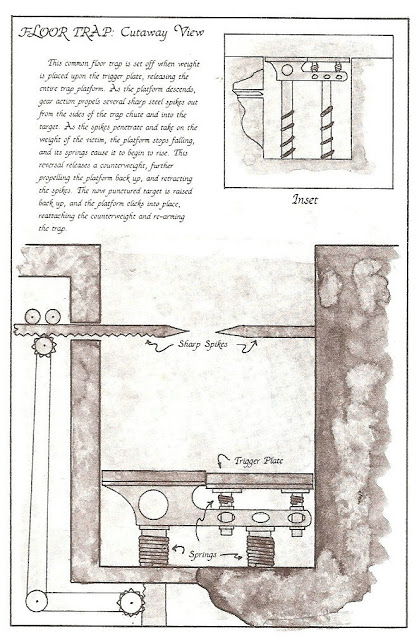 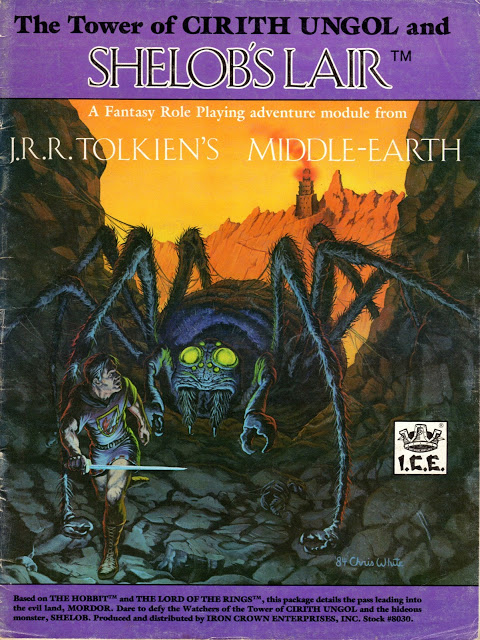 and part of Shelob's lair 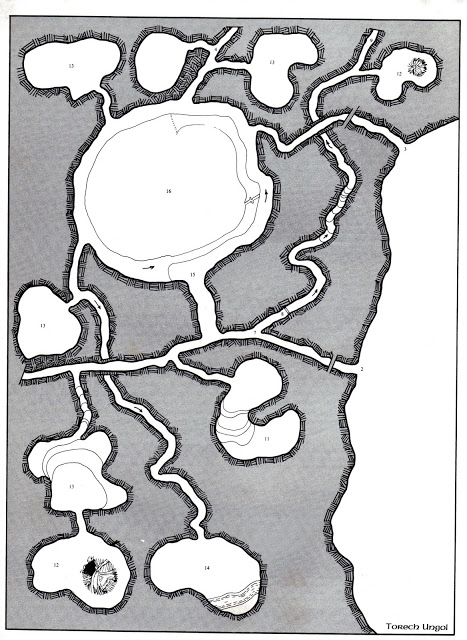 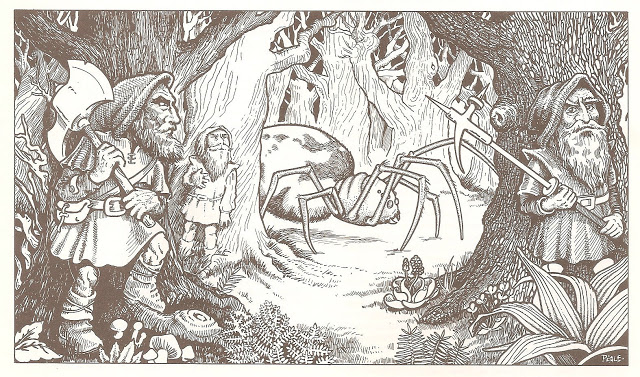 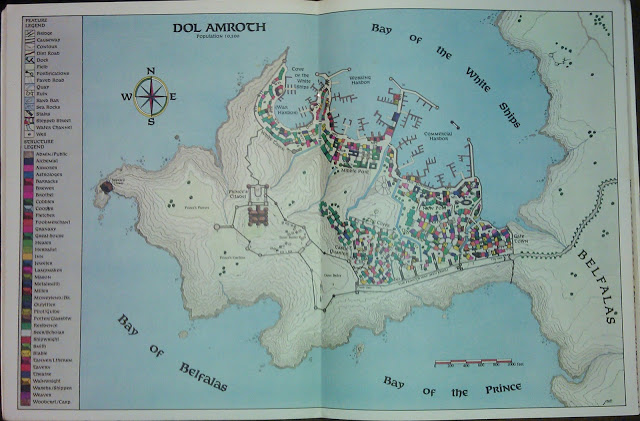 The Tower of Dol Amroth 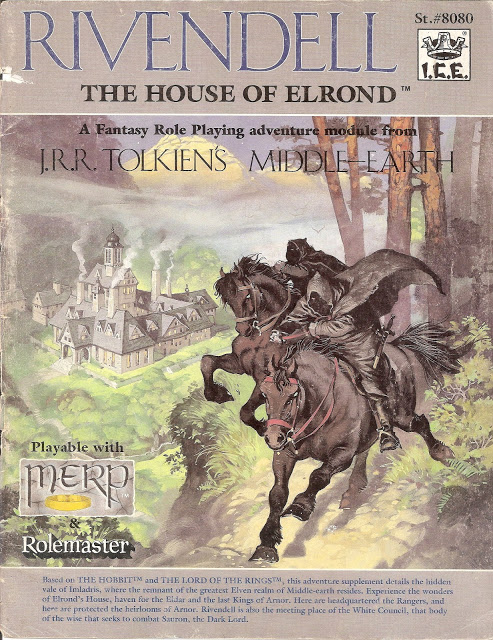 and illustrations from "Haunted Ruins of The Dunlendings", one of my favourite adventure modules 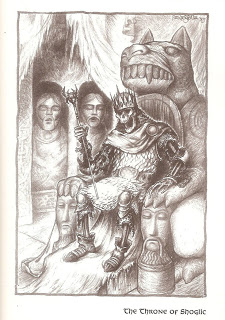 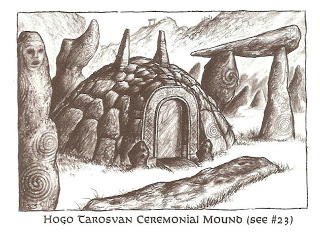 It would be a blast

i'm pretty far away though old bean, sorry to say.

Was Cyberpunk 2020 another Iron Crown game? They did do a cool game in that genre that my group played a few times in the late 80's..

posted on Dec, 8 2014 @ 05:20 PM
link
Wow. I had the full collection; regional modules, campaign and adventure modules. The maps were what sold me on them, the detail was fantastic.

I sold them all about 10 years ago and maybe a nice chunk of change since they were in good shape. I did however keep the large, folding map which filled in all the areas you missed when laying out the regional maps.

When I was a teen, I bought the Merp boxset and DM'd a little bit with my friends.

A friend borrowed the set and I never got it back

So, for my 40th birthday present to myself I bought the rulebook off ebay (and several other cool things) and hope to play it again at some point

I loved the critical tables especially

And yeah...the artwork and maps are very cool!


I actually bought a mint and wrapped copy of the later "Arnor" behemoth mega book for £50 from Ebay. It didn't stay wrapped for long

I bloody loved Fenlon's maps, i owned a fair few original books, then got a complete E-collection which is on an old, broken (but lovingly kept for later) hard drive. I had the fore thought to print them off though and have them all in plastic sleeves and ring binders

Glad you enjoyed looking at all the pics!
edit on 8-12-2014 by skalla because: quote repair

ICE eventually released a Gazetteer of ME with a collection of the maps of Western Middle Earth which almost fitted together into a full map. I had quite a lot of them made up into large glass frames that decorated an old spare room at a previous house. i'm going to have to do that again

I just remembered how I made a failed attempt at creating my own module for the game. It included a land of the balrogs hahaha. Dear me, I hadn't even read the hobbit or lotr at that stage. I was pretty clueless but it was fun

originally posted by: skalla
ICE eventually released a Gazetteer of ME with a collection of the maps of Western Middle Earth which almost fitted together into a full map.

That is the one I kept. I removed the staples and just keep it loose in the cover.