The leak, reported at about 12:45 a.m. Sunday, caused a complete evacuation of the hotel at 9300 W. Bryn Mawr Avenue. The hotel was hosting the Midwest FurFest convention. Attendees dress up like furry animals and celebrate art, literature and performance based on anthropomorphic animals, according to the convention’s website.

Rosemont Public Safety received several calls from guests at the hotel stating there was a noxious odor spreading across the 9th floor, according to the statement. More people told units upon arrival that the odor was also on the 8th floor.

Hello folks....I am begging...please can we not go into the fact that people hate furries? thank you :-)

Yes I was here, staying on floor 6 at the time. Sunday morning I took my sleeping pill ((bad mistake considering)) and was woken up by pounding on my door and an alarm and told stairs only, no elevator. I throw clothes on, jacket, and cell phone and jet down the stairs. I did not personally see the cloud or smell it and have had no ill effects other than sleeplessness and the extreme grumpies

I of course, first and foremost, hope my fellow fans are ok. Some have been released

19 people were hospitalized due to some breathing issues, nausea, dizziness and fainting. 4000+ people evacuated and kept in a convention center across the street for approximately 3 hours. The article is short and there are others. The response was unreal. several cities, MABAS Decon, and Chicago Incident Command arrived with a host of engines, trucks, hazmat and ambulances

Other than rumors and silly folks pretending to be experts on emergency response, very little is known or released. The basics is that a powdered chlorine package was set off and there were several illness. Police have released that they are quite sure this was intentional.

Because of the nature of this convention, it is probably super difficult to determine who did it. On Saturday we have well over 4300+ fans in the hotel. Because of the lack of elevators, most fans use the stairwells which is where the chlorine was set off.

I think this is sick....and I hope ((but sincerely doubt)) they catch the person/persons

But I have to admit that while safety is my main concern, I'd love to know WHY this happened

posted on Dec, 7 2014 @ 06:58 PM
link
If this was intentional, and it appears to have been, it is inexcusable. Furries creep me out but doing something like this just because some people are a little bizarre is seriously awful.


But I have to admit that while safety is my main concern, I'd love to know WHY this happened

Some people take their dislike of something foreign way too far. There are a lot of people that really hate furries because again the behavior is pretty bizarre to a normal person even without the sex/fetish angle. I think everyone has something bizarre that they do and most people have a kink so I've never found it to be all that big of a deal even though I REALLY don't get it.

Glad you're all right and that it appears everyone else will be too. Hope they catch whoever did it.

It is a BIG fancy dress party.

Thank You for the clarification.

yeah people do find it bizarre...I don't do the dress up personally, but have a fine time

I can't even fathom how they would catch the person

But I guess I have to wonder since this is very likely intentional, what's the angle, end-game, goal?

I don't have a clue...and yeah I am fine...was never even close to being in danger

Ironic part is, every year some idiot pulls the fire alarm...typically drunk and wants to have fun...so most of the fans were like "yeah, yeah here we go again"

I mean to be honest, I know nothing of how such investigations work since, while this wasn't as massive as other attacks, it was technically a 'chemical attack' I guess

No one ever listens.

Glad you're safe and nobody was seriously injured.

posted on Dec, 7 2014 @ 07:27 PM
link
so ok...apparently there are already pictures streaming the net of the powder. Am I allowed to post such pictures here if they are not from official news sources? I can 100% confirm it is the stairwell I used each day


yeah people do find it bizarre...I don't do the dress up personally, but have a fine time

I do weird crap all the time so I'm not going to judge. To me it seems like quite a few that dress up have some social issues and this really helps them to connect and be more themselves. If people enjoy it and it doesn't hurt anyone have fun.

I can't even fathom how they would catch the person

So many ways. Cameras, fingerprints, whoever did it is probably an idiot and will say something to someone. Let's hope anyway. Scum bag.


But I guess I have to wonder since this is very likely intentional, what's the angle, end-game, goal?

My best guess is anti furry person. I would guess someone young who has a strong dislike and wanted some bragging/attention. You never know though, could be someone that felt ostracized from the community, could be some religious whacko. My money is on a dumb kid.

I think the intent would have to be based off how much chlorine was released. If it wasn't much, then they probably just wanted to ruin everybody's weekend. If it was a fair amount, then everybody is very lucky. As for how the investigation would go: identify the location it was released, review CCTV footage, interview people. Beyond that? Trade secrets, my son (yes, that's totally a reference from "The Rock").

Glad you're okay though. And next year, listen to Shillington: no skunks allowed!

I think that's fine as long as you say it's unverified.

ok folks so here it is

I did not take this picture, cannot verify that what is on the ground is chlorine or anything else regarding the picture 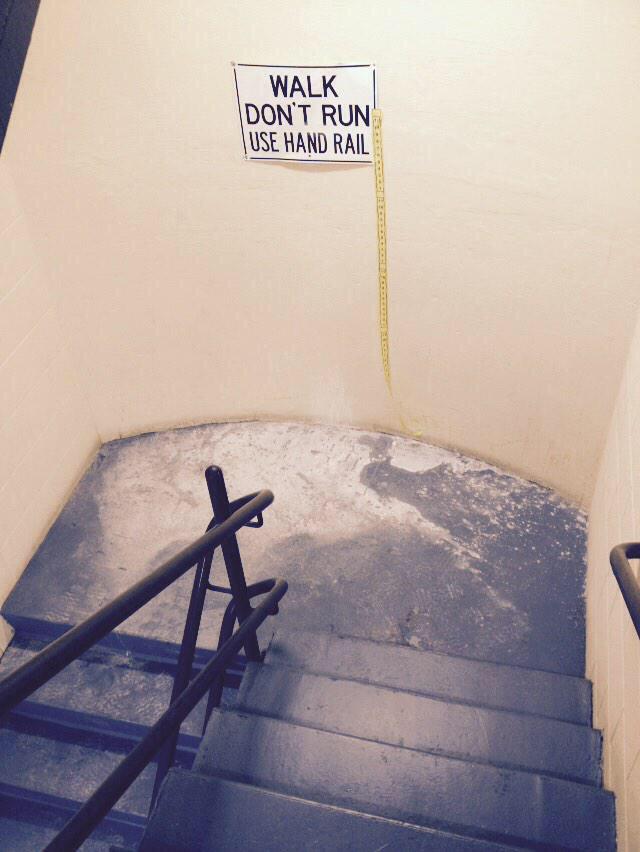 So if this IS verifiable in some way, it does not look like much unless this is partially decomposed or cleaned already
edit on 7-12-2014 by KyoZero because: (no reason given)

The article does state that it was in powder form and found on the 9th floor stairwell so, probably.

Glad it didn't make you sick.

Chlorine is a gas (a deadly one), not a powder. There are of course powdered cleansers which contain chlorine but they don't release chlorine gas. Throwing Comet cleanser (or any other form of powdered chlorine) around isn't going to make a bunch of people sick.

glad you stopped by ((not sarcastic...dead serious))

What that means is beyond me...people suggest so much, but then, people are ignorant, myself included so hopefully someone, somewhere will give us something more concrete

posted on Dec, 7 2014 @ 08:01 PM
link
a reply to: KyoZero
A chlorine leak, intentional or otherwise is feasible. The Hyatt, I'm sure, has a pretty nice pool. But of course that doesn't necessarily mean they use chlorine gas.

Greetings and Salutations- Firstly I'd like to apologize (LOVE is never having to type "sorry"..) for having to deal with someOne else's fears/thoughts/behaviors, and 100-1 that en route to causing the dis-harmony the perpetrators/Turds were telling each other how screwed up Y'all are with Your kinks, it is You that have the problem, don't believe Us ("They" NEVER fight mano/mano, "they" always need/desire a back-up or audience to PROVE their masculinity- Same issue w/those who target the LGBT community, instead of dealing w/their own latency 'they' lash out...)

But I "May" be biased as I'm typing this as I'm wearing a catcher's mask and swim fins..

Also remember Rule #2) What someOne thinks about You is none of Your business.

P.S. The only thing I know of 'furries' is what I've seen on t.v./lamestream media so KNOWING how they skew what is supposed to be news, why would I believe what they try to push? Until I personally KNOW each 'furry' how could I hold a 'collective' responsible?

Oddly enough I don't think they have a pool.

Also, I thought if you mixed a little something with chlorine it would produce gas. Was under the impression even mixing powder or granules or whatever with water was actually fairly dangerous. I would think an enclosed area (at least I would think a stairway in a hotel is fairly enclosed) with not a ton of ventilation would make the effects much worse for any fursuited folks galloping up and down.
edit on 0720141220141 by Domo1 because: (no reason given)