posted on Dec, 5 2014 @ 01:18 AM
link
Toyota is the richest car company on planet earth. They make $265.7 billion revenue per year. They are listed as one of the top 10 richest companies in the WORLD, topped only by gas companies and Wallmart. Source

That being said, check out screenshots from this commercial in year 2000:

Long story short, a guy walks into a make-believe tower in a New York type setting. Everyone is dressed up in suits except this guy. He gets a bunch of weird looks as he is walking in the complete opposite direction as the rest of the people. He is suspiciously hiding something in a duffle bag. (Not sure if this is a terrorist themed scenerio but it sure seems that way.) Then he whips out a unique looking boombox from his bag as if it were a bomb. Everyone looks at him as he plugs it into the towers sound system. As he raises it above his head this flashes:

Here are a few screenshots in order, i will post directions to the vid at the bottom. (The commercial alone i cant find anywhere) 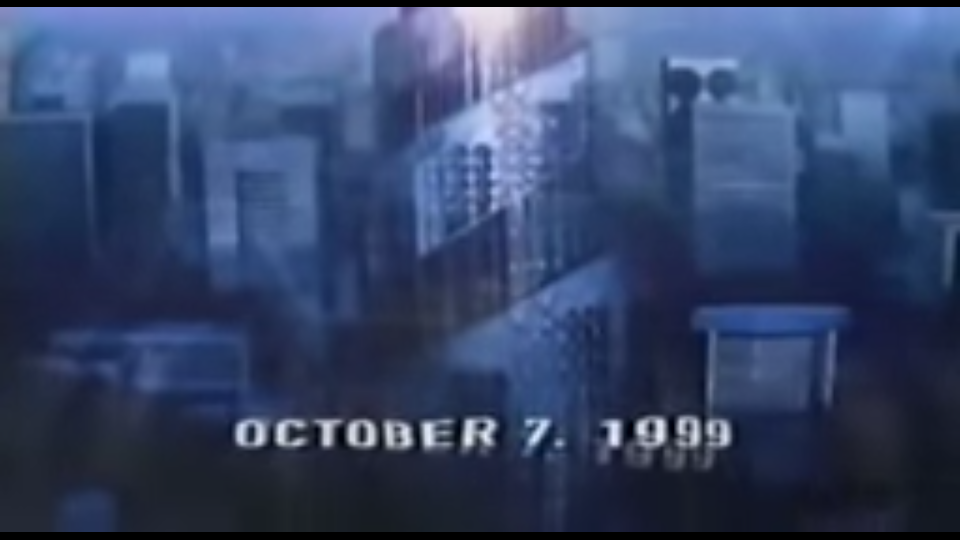 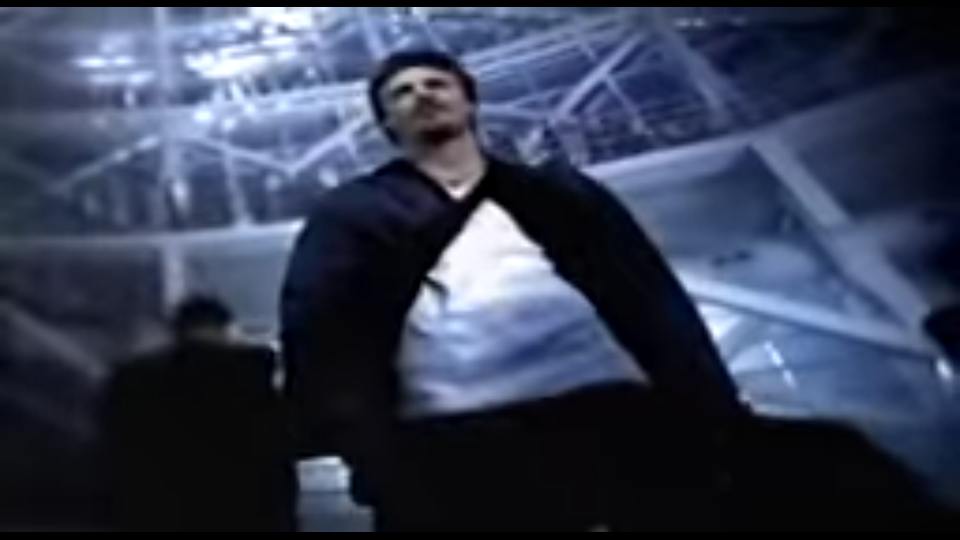 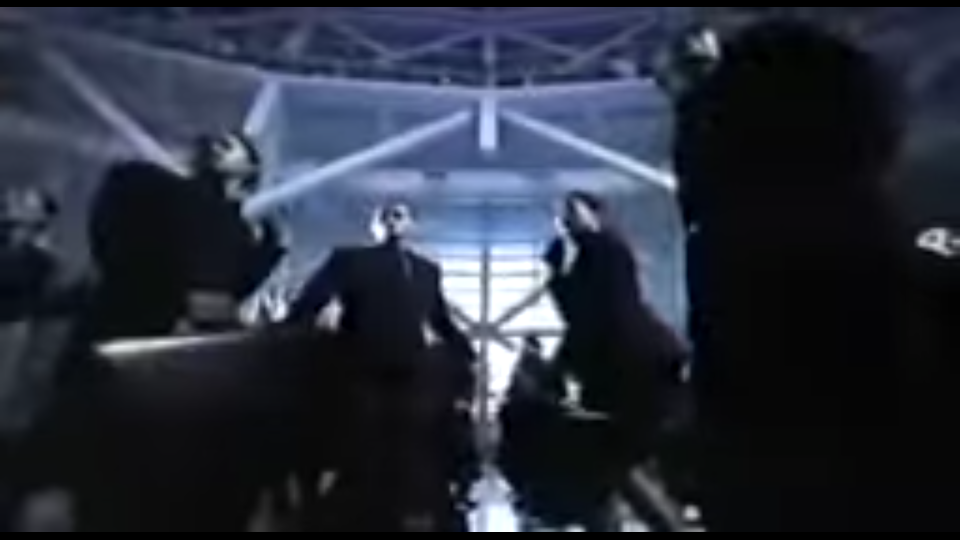 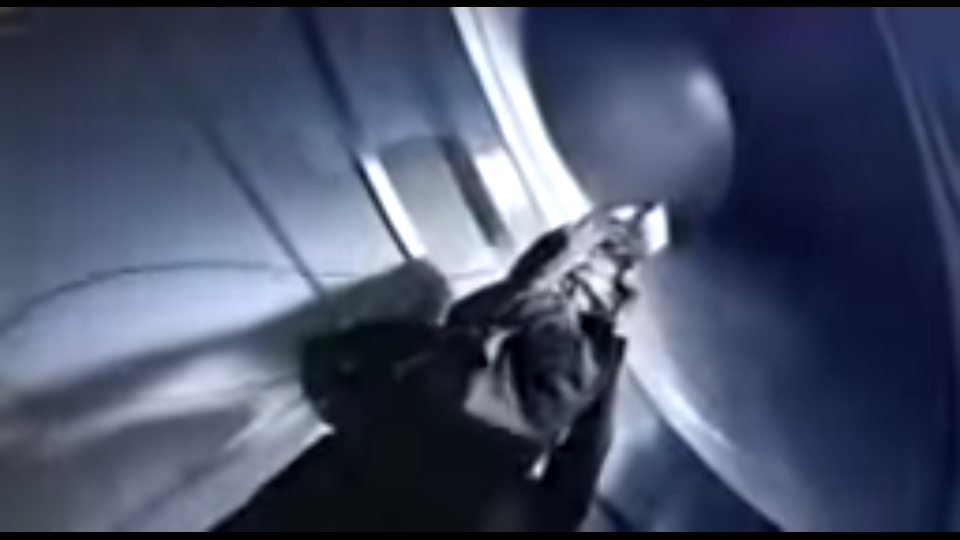 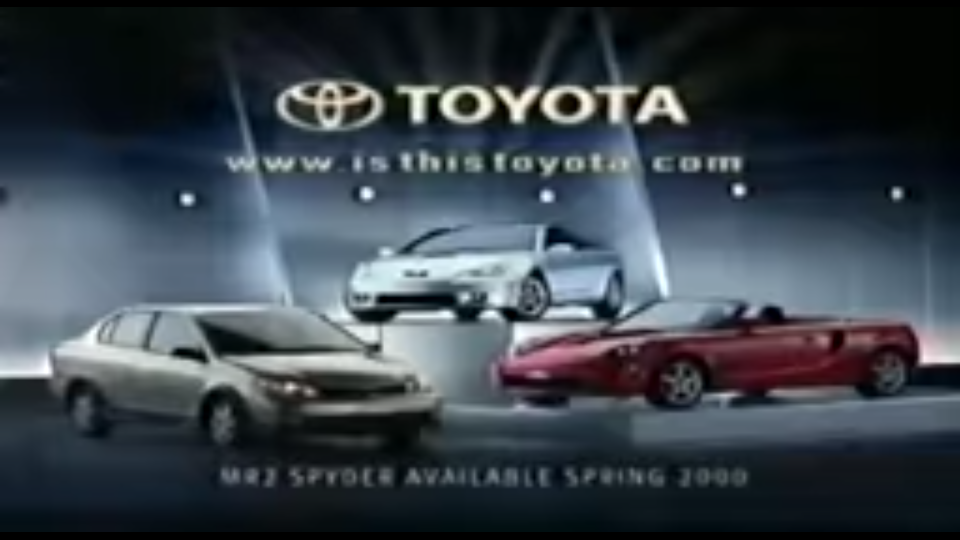 This isnt a normal commercial. A dirty rich corporation advocating Revolution during the heels of 9/11......

From 2012-2014, almost every major movie aimed at the youth is themed around revolution. The biggest being Hunger Games. If a movie isnt blatantly themed about Revolution like Batman, the word " Revolution" is mentioned. From White House Down, Dawn of the Planet of the Apes to the new movie Lucy where Morgan Freeman says "we need not evolution, but revolution". There are big theories floating around that the rich corrupt heads who make up the illuminati are plotting Revolution in America in order to start their NWO. "Order out of Chaos", the real slogan of a 33 degree mason.

They could possibly use 9/11 as their final straw, as humans are already rioting over officer shootings. Imagine if proof somehow leaked publicly about 9/11 being staged. Revolution would be very real.

I just found it weird that such a rich company would be pro revolution, when THEY are the ones that would be targeted in such an event . So its obvious they are advocating and provoking us. Most likely extremely confident making this commercial knowing 9/11 would come the next year.

If you look at the culture of music, movies video games etc of 2014, you can see that they are building revolutionaries out of the young crowd.

Here is the commercial, skip forward to 1:05


I understand many will think this is nothing, but i am a conspiracy theorist and revolution is nothing to joke around about. A clue is a clue. And Toyota doesnt care if we revolt. Awesome
edit on 5-12-2014 by skyfall911 because: (no reason given)

posted on Dec, 5 2014 @ 01:26 AM
link
This has been planned for decades. Order out of chaos, or ordo ab chao, I believe, is one of the definitive phrases surrounding TPTB. There already is a form of NWO, ones who orchestrate world leaders behind the scenes, but the next "phase" will surround it being made public, a manufactured solution for a manufactured crisis. They want divisions through racial wars, economic wars, social struggles like the freedom to do what one wants with ones body along with the basic rights all people should enjoy to prevent the people from truly uniting.

I always wondered if they built the World Trade Center as their failsafe for Revolution. As long as they succesfully pulled off 9/11 (which they did) the New World Order officially began and they can now use the event as leverage. All it takes is some "hacker" group, probably CIA led, to expose the right info and spark a revolt. Like i said, if they riot over Ferguson....imagine September 11th.

The vision of the 'competing towers' has been a theme for a longggg time (Quran or biblical). How and when it is done is unknown.

Sometimes reading into things as abstract after-the-fact is a little too far fetched. I am not discounting your theory wholeheartedly, but this time I just don't see it.

Besides, Toyota is a Japanese company. If any country has a grudge it would be them. Didn't the US nuke them twice? The final straw was because they sent Kamikazes America's Pacific Fleet?

If one were to bring numerous paranoid scenarios into the ad you refer to and see they'd exclaim that they will bring a payback, pull the plug on ya and Japan has THREE (3 world leaders on their side? 3 via paid mercenary/white dude nukes/dirty bombs? 3 enemy countries with nukes/dirty bombs?) to back her up. Japan is sinking by the minute, time is limited there. Their elites are making friends FAST to bug out, afterall.

The truth is it is just an ad or an ad with (hidden) truth. Speculation is interesting but moot without proof. 9/11? no. Something else, perhaps (Unless the 3 planes that hit were named Echo, Celico and Spyder.

Off topic: Thanks for the commercials, makes me miss the 90's even more!

On topic: I found the Toyota commercial to be interesting. For some reason I got a feeling that "we need to be set free" from the video.

I agree. I have this one theory about impending revolution, one theory about 9/11 and the above commercial just served as a ground for me to bring up these things. Ill stop looking too much into the Toyota comercial and bring up more hard core evidence to base my claims.

Like this screen shot from a 1998 American Airlines commercial: 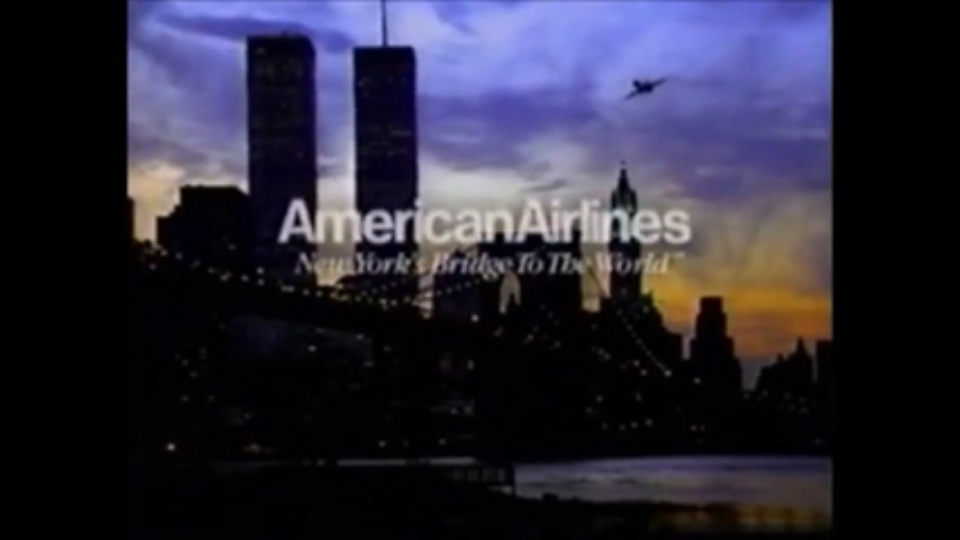 American Airlines Flight 11 would be the 1st plane to hit the WTC. This would warrant me to think maybe they programmed humans through commercials and media prior to 9/11. 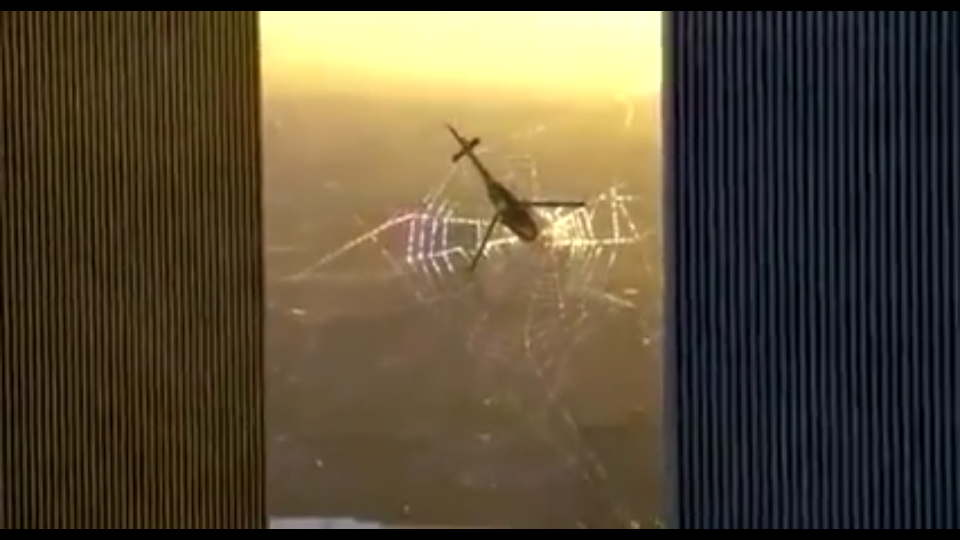 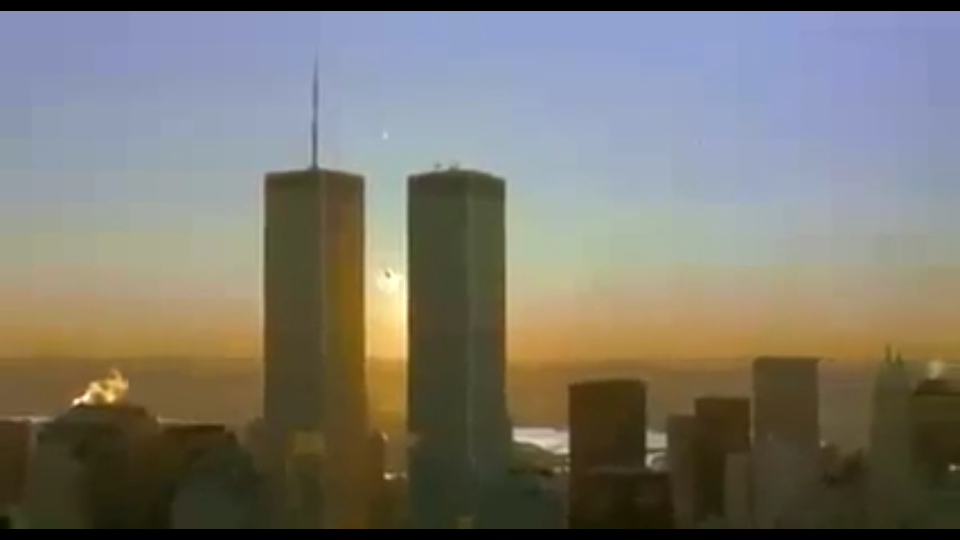 ^ Promotion shown in all movie theaters in year 2000 for the first Spiderman movie. He spun a web between the World Trade Center to catch bank robbers 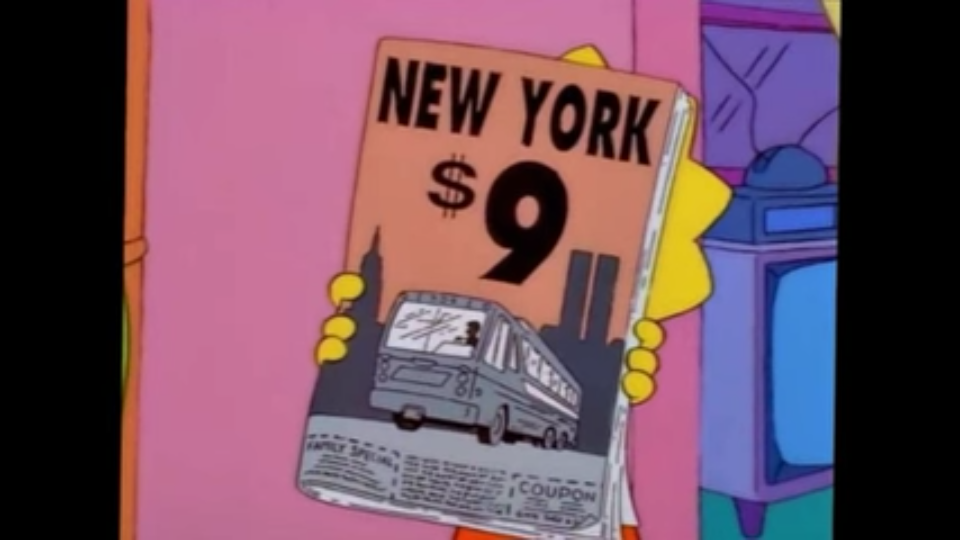 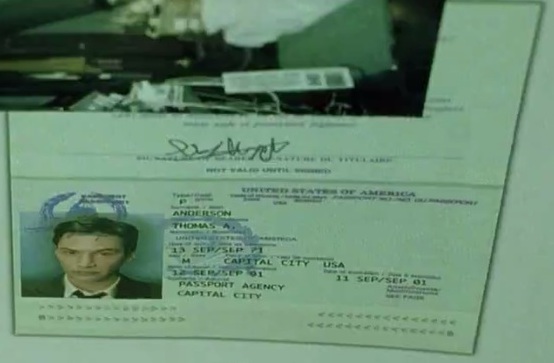 
I'm not saying that commercials (that cost hundreds of thousands per 30 seconds or movies that cost millions) are a conspiracy, nor that they aren't.

I do believe that if they are are (in our most paranoid brain spidey senses) oftentime a trigger they are a merely based up a need to know basis, to and for the sick elitists to have a public auction bidding war--and the joke is on us.

That fund is divide up between 8 major categories. Food, mining (oil, gas, ****aluminum****, copper, iron, production/refinement of diamond, , other, other other crap, etc). So far, it is a race between the first 4.

THAT is your clue. Go from there and watch the bids come in.

Two words: Controlled Revolution.
Revolution = A turning point, or more importantly a full circle.
Civilizations/regimes/parties all have an expiration date attached to them.
These guys invented the chessboard: thinking multiple steps ahead is commonplace, especially in terms of ruling the working class.
Next time someone pushes "change", ask yourself if it is the kind you think you deserve.

originally posted by: ThinkingCap
a reply to: skyfall911

Two words: Controlled Revolution.
Revolution = A turning point, or more importantly a full circle.
Civilizations/regimes/parties all have an expiration date attached to them.
These guys invented the chessboard: thinking multiple steps ahead is commonplace, especially in terms of ruling the working class.
Next time someone pushes "change", ask yourself if it is the kind you think you deserve.

Same crap different day, bigger pile smaller shovel.
edit on 5-12-2014 by Rosinitiate because: (no reason given)

How can they be advocating Revolution on the heels of 9/11 if the commercial was made in 2000?

From 2012-2014, almost every major movie aimed at the youth is themed around revolution.


But not any actual revolution directed at the overthrow of the state. Rather the revolutionary new line of automobile, iPod, some fantasy world in Movies, etc.

The idea of revolution along those lines isn't a revolution at all (cars are cars), merely an attempt to familiarize people with the term associated with new products and dissuade people from thinking of revolution of the "Regime Change" kind.

Here in the West anyway. So think correctly, buy the revolutionary new video game and support your local government in their efforts to overthrow other governments.

I agree, every generation (since the written word/and more currently--movies) has had underdog (revolution) type movies.

Hunger Games is yet another matter. Such dialects require one to actually become accustomed to kill for sport and enjoyment of another, so darn Roman and uncivilized. Yet we are uncivilized anyways. De-evolved, I'd say.

Why anyone would sit through such nonsense is beyond me. It would only desensitize you to a fright/fight reality that I wouldn't want to witness in reality.

Revolution itself can be a good thing. *Read any European.Spanish history books*. Revolution where your own military force hurt's their citizens? yep, not the first time. Revolution where those who control those forces (when they are losing) can easily toss one-millionth of a micro-gram of toxin to rid of millions---yep, a new ballgame altogether.

posted on Dec, 5 2014 @ 09:19 AM
link
Anyone else notice that Y2K--although what was 'feared' never came to pass--was a catalyst of sorts? Ever since then, TV has just been...different. Values have changed. People are more obsessed with buying things. Technology has advanced quickly. The new era is totally different than what used to be. And my friends and I find that a little bit creepy. Granted, our aluminum-foil thinking caps might be on a bit tight but, still. Weirder things have happened.

originally posted by: Yeahkeepwatchingme
This has been planned for decades.

Decades only? You are definitely onto something but a bit more imagination is needed.

Is it possible that what is written in the worlds holy gospels are not predictions rendered by prophets about the future, but rather magical spells put against us? By who? The Logos or Archons, perhaps - alas just for their own hidden purposes. Perhaps the ancient greek poets had it right all along; humans are but the playthings of the gods. Let us just keep quiet and hope they forget us as a toddler would his toy when he gets borded of it.

I have not seen some of these.

Up to this point, the number "911" wasn't mentioned in any literature, and apparently wasn't identified until the press conference.

Construction work began on the North Tower in August 1968; construction on the South Tower was underway by January 1969.

9-1-1 and the World Trade Center were born the same year. Coincidence? Hell no. Then i saw this AT&T commercial from 1996. Icing on the cake.