page: 1
23
log in
join
share:
isyeye
+10 more
posted on Dec, 4 2014 @ 06:18 PM
link
It’s been a while since I started a new thread, so I thought I would introduce an ancient site to those who may not have heard of it before (I don't believe it has been discussed on ATS before).

While there are many stepwells to be found in India, Chand Baori is the deepest, and in my opinion the most impressive. The architecture found in the site is breathtaking and quite amazing.


Chand Baori is a stepwell situated in the village of Abhaneri near Jaipur in the Indian state of Rajasthan.

Chand Baori is one of the oldest and most attractive landmarks in Rajasthan.[3] It was built by King Chanda of the Nikumbha Dynasty between 800 and 900 AD [3] and was dedicated to Hashat Mata, Goddess of Joy and Happiness upon completion 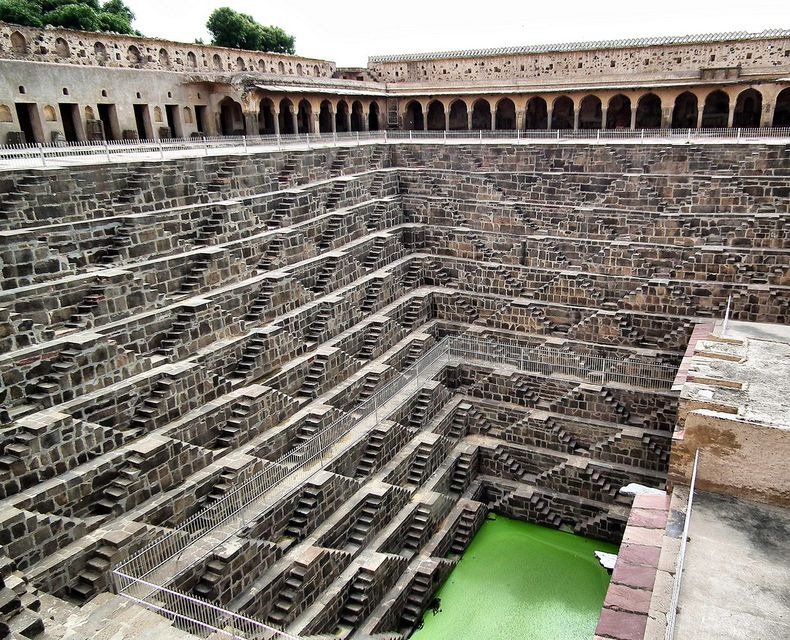 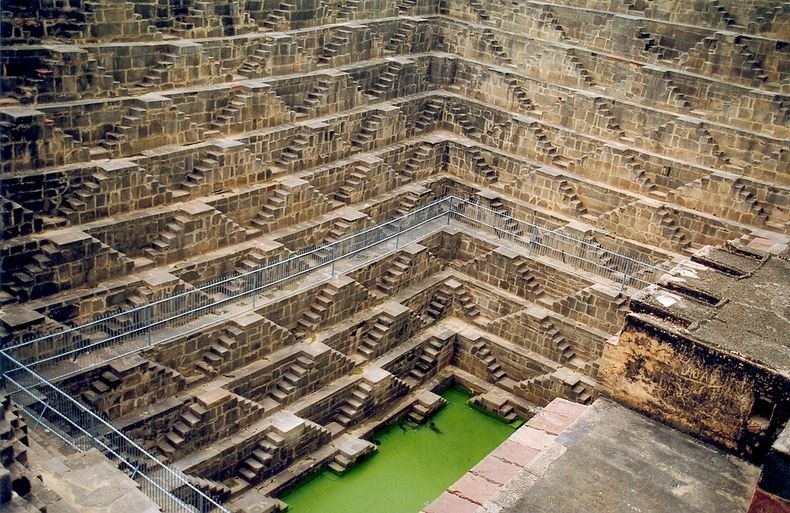 Chand Baori in Abhaneri village in eastern Rajasthan, India, is one of the most overlooked landmarks in the country. It is one of the oldest stepwell in Rajasthan, and is considered to be among the biggest in the world. Chand Baori looks like anything but a well. This incredible square structure is 13 stories deep, and lined along the walls on three sides are double flight of steps. 3,500 narrow steps arranged in perfect symmetry descends to the bottom of the well 20 meters deep to a murky green puddle of water. 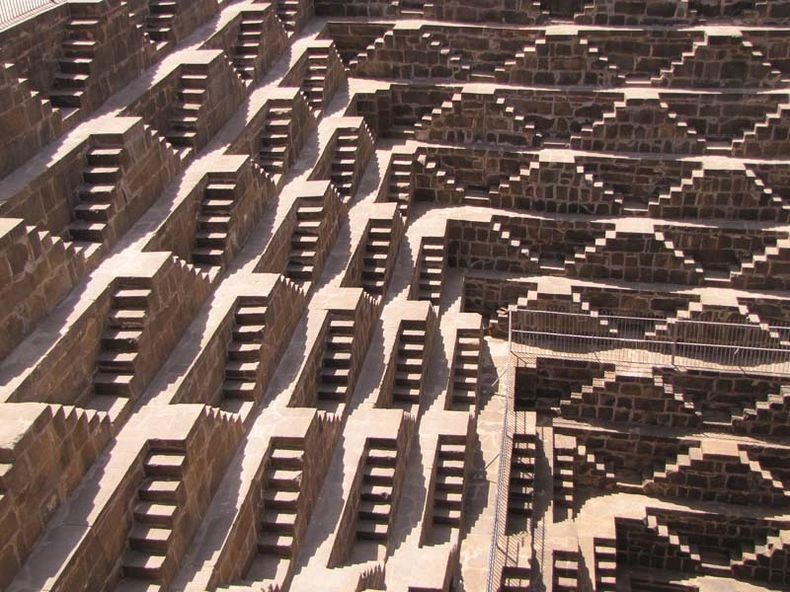 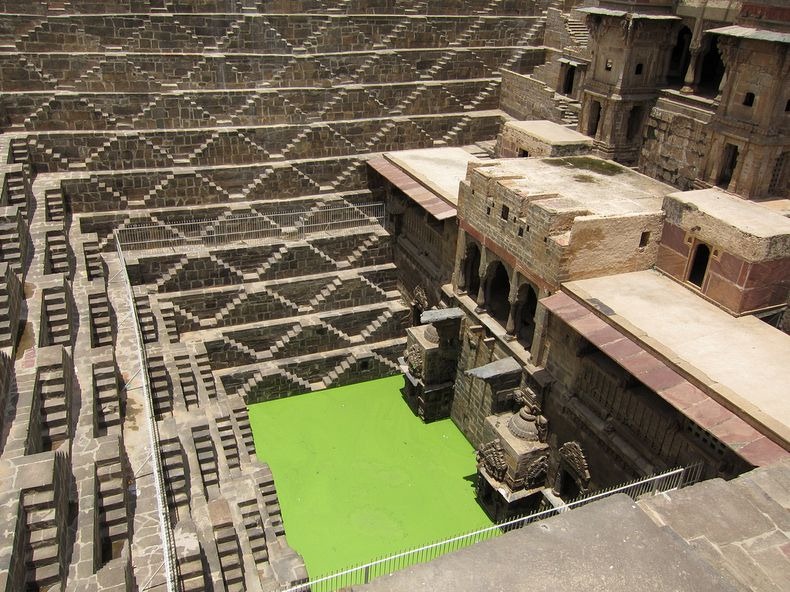 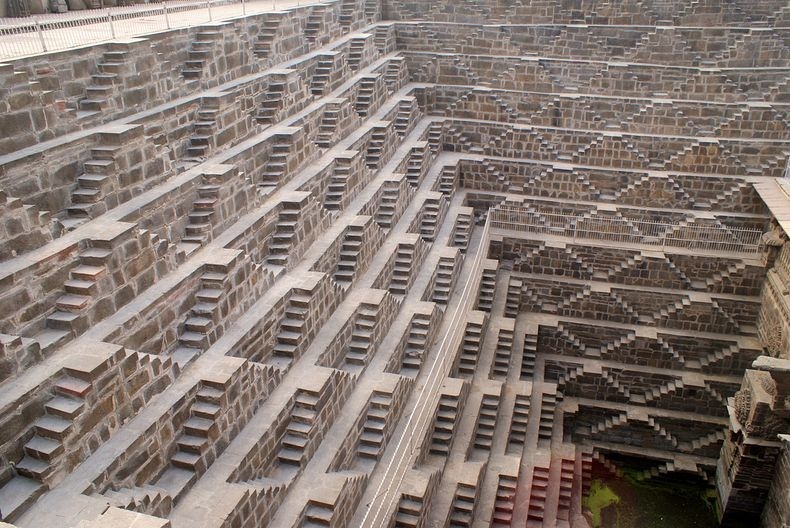 Chand Baori in Abhaneri, near Jaipur, Rajasthan Among the largest, if not the largest, and perhaps the most visually spectacular stepwells, Chand Baori is a deep four-sided structure with an immense temple on one face. 3,500 Escher-esqe terraced steps march down the other three sides 13 stories to a depth of 100 feet. The construction dates to the tenth century, and is dedicated to Harshat Mata, goddess of joy and happiness.

There are tons of amazing pictures to be found on the internet on Chand Baori, and worth the time doing a little extra research. This is one of a million places I would love to see in person.
edit on 4-12-2014 by isyeye because: corrections

posted on Dec, 4 2014 @ 07:25 PM
link
Thanks for posting this! I've never heard of this place and so glad you shared it on here. This place is beyond beautiful and mesmerizing. Definitely will add this place on my bucket list.

You'd think such geometrical precision was only possible with advanced technology not accessible back then...

But only a Tool would entertain that thought.

Consider that this was built in 800 AD which is well within recorded history. Solid engineering and superb craftsmanship!

If I look at a couple of those pictures just right, it seems kind of MC Escher-ish

The wiki on Chand Baori states that this site was built by King Chanda of the Nikumbha Dynasty right?

The village is said to have been founded by the legendary king Raja Chand and thus the village could be over three thousand years old. However, it is felt that the mythological Raja Chand could be King Bhoja, who ruled over the Gurjar kingdom in the ninth century AD.


templenet
So I looked up King Bhoja, who has a much more interesting history..

Here are some highlights..

Samarangana Sutradhara A treatise on civil engineering detailing construction of buildings, forts, temples, idols of deities and mechanical devices including a so-called flying machine or glider. It is composed largely in the anuShTubh meter and in about 83 chapters.

He is also linked by lineage to the fire god Agni who was the messenger of the gods and the acceptor of sacrifices.

In other words, he is an Alien or Alien Hybrid.

The village of Abhaneri is believed to be established by Gurjar parihar king Samrat Mihir Bhoj.In mythology samrat Mihir Bhoja is presented as King Raja Chand

A manuscript, composed in Sanskrit by King Bhoja in the 11th Century A.D., deals with techniques of warfare, and in particular with certain types of war machines. The work is called Samarangana Sutradhara, or "Battlefield Commander"(sometimes abbreviated "the Samar"), and the whole of chapter XXXI is devoted to the construction and operation of several kinds of aircraft having various methods of propulsion.

King Bhoja, who used the Sanskrit term yantra more often than the more familiar vimana, claims his knowledge was based on Hindu manuscripts which were ancient even in his time. Some of the techniques of manufacture described therein have been in use by British and American aircraft companies since World War I, and have been found to be sound aeronautical principles even though described nearly a thousand years earlier in this old Sanskrit work.

Bhoja's lineage is supposedly connected to Mahabhoja who is mentioned in the mahabharta....

Mahabhoja was a pious prince; his descendants were the Bhojas, the princes of Mrittikavati

On one occasion Satrajit, whilst walking along the sea shore, addressed his mind to Surya, and hymned his praises; on which the divinity appeared and stood before him. Beholding him in an indistinct shape, Satrajit said to the sun, "I have beheld thee, lord, in the heavens as a globe of fire: now do thou shew favour unto me, that I may see thee in thy proper form." On this the sun taking the jewel called Syamantaka from off his neck, placed it apart, and Satrajit beheld him of a dwarfish stature, with a body like burnished copper, and with slightly reddish eyes. Having offered his adorations, the sun desired him to demand a boon, and he requested that the jewel might become his. The sun presented it to him, and then resumed his place in the sky. Having obtained the spotless gem of gems, Satrajit wore it on his neck, and becoming as brilliant thereby as the sun himself, irradiating all the region with his splendour, he returned to Dwaraka. The inhabitants of that city, beholding him approach, repaired to the eternal male, Purushottama, who, to sustain the burden of the earth, had assumed a mortal form (as Krishna), and said to him, Lord", assuredly the divine sun is coming to visit you." But Krishna smiled, and said, "It is not the divine sun, but Satrajit, to whom aditya has presented the Syamantaka gem, and he now wears it: go and behold him without apprehension." Accordingly they departed. Satrajit having gone to his house, there deposited the jewel, which yielded daily

What if the city of brilliance once held a brilliant gem?

Or a brilliant source of power?
edit on 4-12-2014 by Thorneblood because: (no reason given)

posted on Dec, 5 2014 @ 12:06 AM
link
Ooooooo I really want to watch that movie now, I will try to find it somehow, do you think I can watch via Internet or something?a reply to: DaphneApollo

edit on 5-12-2014 by Cloudbuster because: Stupid autocorrect ipad

I am getting more and more interested in the Indian sacred books and their tales. This thread is such a beautiful one because the step well immediately tells of the love and care with which it was created. We are continually finding out about ancient craqftsmen and the amazing things they achieved. Today so much is made with built-in obsolescence its sad.

I have always believed that India is a very special country with a lot for a Westerner to learn and I am enjoyed this learning spell.

I was especially fascinated when Grahame Hancock told us about Dwarka and we say some of the artefacts from that City.

posted on Dec, 5 2014 @ 05:11 AM
link
Great find! I love the ancient world and these wells in India are nothing new but always are stunning. How they carved into the earth with such precision and detail baffles me. We are missing something that the ancients new. They carved stones that weigh thousands and thousands of pounds and transported them thousands of miles away effortlessly. We cant do it today with our technology.

I've always thought they were a marvelous piece of engineering and very artistic in design.

Wow, that really is rather special.

Thanks for sharing this, way cool.

originally posted by: LibertyPD32
Great find! I love the ancient world and these wells in India are nothing new but always are stunning. How they carved into the earth with such precision and detail baffles me. We are missing something that the ancients new. They carved stones that weigh thousands and thousands of pounds and transported them thousands of miles away effortlessly. We cant do it today with our technology.

I'm pretty sure it wasn't effortless, I expect that blood, sweat and tears were involved in copious amounts.

I'm not touching the "we can't do it today" comment, except to disagree strongly, as I don't want to divert from a fascinating OP.
edit on 5-12-2014 by skalla because: moved punctuation

Click on the bit of the Video that says Youtube. It will take you there. The rest of the scenes are there too.