posted on Dec, 4 2014 @ 04:36 PM
link
According to this article on CNN «A Tyrannosaurus rex fossil from the Denver Science Museum will be on board» the Orion spacecraft.

According to the mission's blog, NASA's planned test mission for the Orion space vehicle that will allow for inter-planetary space travel, is planned for «Friday, Dec. 5 at 7:05 a.m. EST, atop a ULA Delta IV Heavy from Cape Canaveral Air Force Station in Florida.»

As the spaceship returns to Earth we will see the fiercest Dragon known to Man fall to the Earth and light up the sky like a ball of fire and brimstone-- the Tyrannosaurus Rex. Or a piece of one to be more precise. A fossilised piece. But T-Rex never-the-less. And what is the name of the Orion flight director at Johnson Space Center? Mike Sarafin of course. Proper

It can't get any more obvious than this. Is there any reason why this would not fulfil the classical plot of "The Dragon Falls Again, Hoo-Ray!"??? I can't see any. They are also sending up Cookie-Monster's cookie and Ernie's rubber duck and a few other things, like a bunch of flags, and «the names of more than a million people packed on a dime-sized microchip» and «an oxygen hose from an Apollo 11 lunar spacesuit»

This looks promising
edit on 4-12-2014 by Utnapisjtim because: misc 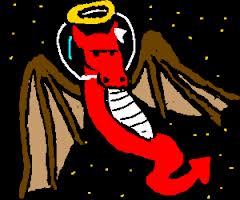 Unless of course its a space bat angel dragon. LoL
edit on 4-12-2014 by andy06shake because: (no reason given)

Deary me,we could be deeply in it.

Not that I would believe it...but you never know.

Dragons is everything when it comes to space travel. According to Hebrew lore, Samael came riding to Earth as the first of the gods arriving here, and he came riding on a «blind dragon». Blind as a bat I suppose. Nice drawing.

ETA: Thousand years from now, Mankind will build another vehicle and send the same fossil safely through the Sun if it's still around that is. Like a bat out of the «Hel-Ljos». To see what happens. Naturally. And something will, happen, and it will mark the beginning of a new time complex. And how do I know? It's right there in the Olde Booke.
edit on 4-12-2014 by Utnapisjtim because: eta

I just want to know who are the officials that had meetings to arrive at this mission and purpose, how serious could they be about their work or their real purpose?

Possibly on a mission patch with some poetic Latin ethos attached but really that's about as relevant as Dragons get regarding space travel, same with dinosaurs I imagine. Unless of course the evil draconians from Orion I might add are playing the symbology card.
edit on 4-12-2014 by andy06shake because: (no reason given)

I wonder how this does ties in with the virgin that fell from the sky a couple weeks ago if we relate it to prophecy?

Should we just let it go up or should we protest it?

WTF could be the possible excuse to send a rock up there other than prophecy?

I fail to see how this is worth the tax dollars that are being thrown around this event.

I had to look that up, a series of prophetic poem's supposedly by a mother Shipton
www.crystalinks.com...
Very intriguing but I think old Leonardo did far better.
If right they span of time these prophecy's cover is probably far longer than most interpretation, still?.
This passage took me by surprise

And christian one fights christian two
And nations sigh, yet nothing do
And yellow men great power gain
From mighty bear with whom they've lain.

But This passage followed directly after and would suggest the Yellow men and the bear do not win but merely sow chaos that feed's also back on themselve's, possible biological warfare or radiation poisoning.

These mighty tyrants will fail to do
They fail to split the world in two.
But from their acts a danger bred
An ague - leaving many dead.
And physics find no remedy
For this is worse than leprosy.


As for sending a fossil into space, Why is this some kind of twisted symbolic ceremonial occult sacrifice by a bunch of highly placed cult nutters or is someone of that ilk paying them to do this as part of there own occult ceremony.

Mind you I supposed it is cheaper than genetially creating a T.Rex and then engineering a giant space suit for it but that would then be like someone saying to the russkies "well you sent Laika the pooch but we sent astronaut Rexy Nya Nya nan naa naa"

However trivial or symbolic this may seem to most people, there's a reminder echoing: About 10 years ago, Mary Schweitzer of North Carolina State University in Raleigh-- found soft tissue, or «blood vessels and structures that looked like whole cells» embedded in fossilised bone fragments of what was once a T-Rex, discovered in Montana in 2000. Further: «At an October 2005 paleontology conference, Schweitzer presented preliminary evidence that she has detected real dinosaur proteins in her specimens.» And within a year later, Schweitzer and her lab assistant, Jennifer Wittmeyer announced they had «found probable blood vessels, bone-building cells and connective tissue in another T. rex, in a theropod from Argentina and in a 300,000-year-old woolly mammoth fossil.»

Now that's what I call a kosher pig for ya!

Nah. They were the dinosaurs. Now birds, they occupy the first heaven, the sky up to the clouds. Just like the story goes.