The Latest in Creation Science

posted on Dec, 4 2014 @ 03:07 PM
link
This video is a chronology of some the latest discoveries corroborating the creationist perspective of science. For those Christians who by into evolution, let reason prevail by the creationist predictions that have been proven true.

The Latest in Creation Science by Fred Williams: 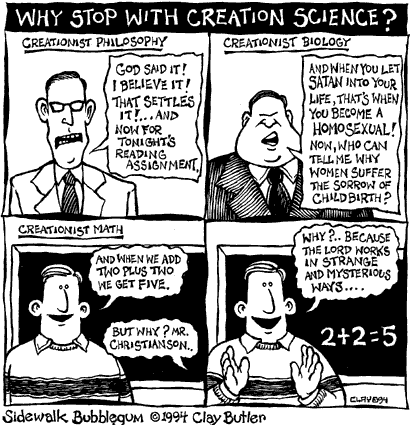 Creationist science is an oxymoron.

And if you believe in creationism, well then you're just a moron without the oxy

posted on Dec, 4 2014 @ 04:04 PM
link
I got about 50 minutes in and didn't see any science backing up creationism. What I did see and hear were claims being made, some completely false but none were backed up with science. One of the claims was the Ark was perfectly built to handle the sea/oceans, except that has been proven blatantly false where tests have been done to scale. The thing would sink like a rock. He also claims the earth was repopulated by 9 thousand pair of species which is genetically impossible.

It is one of the better creationists videos but it still full of lies and misrepresentations against evolution with no science backing up a biblical creation. It isn't worth watching the rest for me. He has lied too many times already to be taken seriously. Once or twice OK I can understand but it is way beyond that where one needs a snorkel for the Bulls#!t.
edit on 4-12-2014 by Grimpachi because: (no reason given)

However, they have made considerable progress - 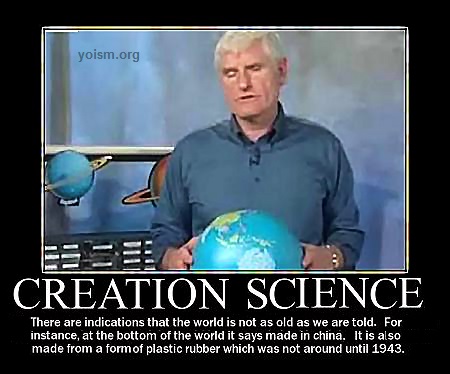 What happened to: "Thou shalt not bear false witness"?

It's exceptionally unChristian to resolutely lie.

More fundie mental gymnastics, your video of halfwitted religious fanatics disputing obvious facts about reality will not cast doubt on those facts. You can dispute anything if you're dumb enough, but you will never find a rational basis for this stupidity, any more than someone with coulrophobia will ever find a rational basis for his fear of clowns. But the coulrophobe has this advantage over creationist... He can and will admit that his phobia is irrational. While the fundies have to pretend and lie about being rational.
The scientific method is the method used by scientists to uncover facts, not the method used by religious apologists to deny them. The latter method is known as apologetics. If creationist were being scientific, they would come to the same conclusions as scientists. It's that simple..

posted on Dec, 4 2014 @ 04:31 PM
link
Honk. Entertaining honk, but still honk. Gerrymandered facts that almost become pretzels - all the hallmarks of the so-called 'creationist scientists'. I note that no actual scientist takes them seriously. I wonder why?

originally posted by: AngryCymraeg
I note that no actual scientist takes them seriously. I wonder why?

Because of the conspiracy, donchaknow?

Here's my problem with science and evolution: there is no 100% solid evidence of species to species evolution, outside of fossil record, which seems to show jumps from one species to the next, which can all be lined up to show a gradual evolution from a common ancestor to current. To my knowledge, the change in chromosomes from one species to the next is still in debate, but at least 95% of evolution is covered by actual scientific fact, with the only holes being the above mentioned, and figuring out that pesky "origin of life" issue, but even with that, there are theories and possibilities that are scientifically plausible..

Here's my problem with creationism: it's mostly based off of a book, that was written by Romans, ripped off of many ancient religions, to bring together citizens of the regions the Romans conquered. (Story of Jesus is extremely similar to Horus, Adam and Eve, garden of Eden from the Sumerians, etc.) So if anyone buying into the bible for creationist insight, they're looking in the wrong place.

Also, if religious texts cover everything, from the beginning of earth, you would think someone, somewhere, would've run into a dinosaur at some point.

The way I see it, science might not have all the answers, but it's enough to be accepted, it has enough evidence behind it to be completely plausible.

Creationism on the other hand..... I have no doubt in my mind that the events that are described back in the day happened, but as far as earth being created in a week, only being 6k years old, etc...... There's no evidence. There's no science. There's no witnesses. Nothing but a book, and the belief that it's true.

However, I do hold the belief that both science and religion can and will intersect, shedding light on, and filling in the gaps of, both sides of the argument. When that'll happen? Who knows.


originally posted by: AngryCymraeg
I note that no actual scientist takes them seriously. I wonder why?

Because of the conspiracy, donchaknow?


don't think there's a biological scientist in the world who'd turn down the chance to discredit evolution. Let's face it, this discovery would be huge. Hugely massively, stupendously HUGE.
Your name would become immortal in scientific literature, and 500 years from now kids would learn your name just like they currently do for Darwin, Newton and Archimedes. You'd get on the cover of Time magazine, you'd be feted by religious leaders of almost every persuasion, you'd be invited on talkshows, you'd be asked to advertise toothpaste. If British, you'd get a knighthood. If American, a reality-show. If it was me, I'd still have a small but non-zero chance at my Claudia Schiffer fantasy

Seems to me the op should publish these incredible findings and collect his Nobel.

We're not talking about God created all life vs evolution. No. We're talking about Biblical Genesis Creation Vs. Evolution which...roughly leaving out 67% of the earths population. These 67% might be inclined to disregard evolution for a good Creationist theory that doesn't cater to the roughly 33% of the worlds population who identify as Christians.

What of them? Or us? So now you aren't just talking about God and evidence that God or Gods Created us and designed us...no it's Genesis.

I hear the creationist space program had to be delayed; the bottle fell over..

originally posted by: dothedew
... Here's my problem with science and evolution: there is no 100% solid evidence of species to species evolution ...


These two members of different species look related to me ... 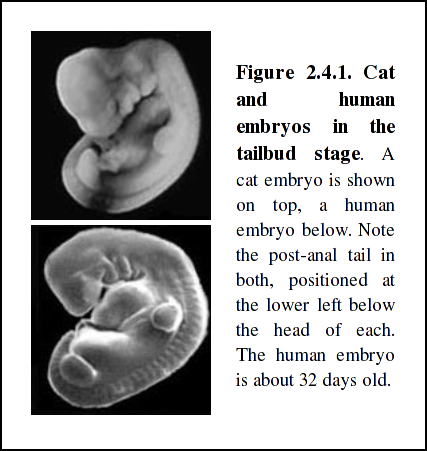 talkorigins.org/faqs/comdesc/section2.html#ontogeny
edit on 4-12-2014 by Frank12345 because: (no reason given)

The truth is out there somewhere.

The problem is nobody is really interested in finding it. Both sides are busy running around selling their own agendas to the nearest idiot without a clue. Trust is something that is earned and neither side has earned mine!

originally posted by: Grimpachi
I got about 50 minutes in and didn't see any science backing up creationism. What I did see and hear were claims being made, some completely false but none were backed up with science. One of the claims was the Ark was perfectly built to handle the sea/oceans, except that has been proven blatantly false where tests have been done to scale. The thing would sink like a rock.

Can you provide a link where this has been "proven" wrong, because the only real tests I could find of any kind actually showed that the ark in theory was perfectly designed to float in severe conditions. Years ago, a study was done by the Korea research institute of ships and ocean engineering headed by Dr Seon Won Hong on the feasibility of the dimensions of a wooden ship surviving the flood as given in the story of Noah. It was published and translated in English on numerous websites. The tests showed that Noah's Ark had among the best proportions possible for a wooden ship to survive.

In this study, the safety of Noah’s Ark in the severe environments imposed by waves and winds during the Genesis Flood was investigated. Three major safety parameters—structural safety, overturning stability, and seakeeping quality—were evaluated altogether to assess the safety of the whole system.

The concept of ‘relative safety’, which is defined as the relative superiority in safety compared to other hull forms, was introduced and 12 different hull forms with the same displacement were generated for this purpose. Evaluation of these three safety parameters was performed using analytical tools. Model tests using 1/50 scaled models of a prototype were performed for three typical hull forms in order to validate the theoretical analysis.

Total safety index, defined as the weighted average of three relative safety performances, showed that the Ark had a superior level of safety in high winds and waves compared with the other hull forms studied. The voyage limit of the Ark, estimated on the basis of modern passenger ships, criteria, revealed that it could have navigated through waves higher than 30 metres.


So, if one could hypothetically build an ark to the specifications outlined in the Bible, and actually cram two of every species on the boat, would it float or would Noah have found himself in a Titanic-like scenario? That’s what four physics graduate students at the University of Leicester wondered. As part of a special course that encourages the students to apply basic physics principles to more general questions, the team did the math and found that an ark full of animals in those dimensions could theoretically float. They recently published their research in a peer-reviewed, student-run publication, the Journal of Physics Special Topics.

originally posted by: GrimpachiHe also claims the earth was repopulated by 9 thousand pair of species which is genetically impossible.

According to what exactly?

The truth is out there somewhere.

The problem is nobody is really interested in finding it. Both sides are busy running around selling their own agendas to the nearest idiot without a clue. Trust is something that is earned and neither side has earned mine!

The truth is altogether too mundane for most people - they aren't interested because it's not dramatic enough.

For example, the Jerusalem UFO a few years back was proven unequivocally a fake by some keen eyed skeptical posters here, but regardless of this information people back then (and still now) prefer to believe it was real. They can't handle this "oh it was just a mundane thing" explanation and continue to search for something more.

No thanks. When you get some testable evidence proving that God exists and created something/anything, put it in a peer-reviewed scientific journal and I'll read it.