posted on Dec, 4 2014 @ 02:31 PM
link
A team of archaeologists from Inrap, excavating in southwest France at a proposed building site, have uncovered graves including one multiple burial containing the remains of a man, two young women and two children about 250 meters from the Amphitheatre of Saintes. The graves have been dated to the 2nd century AD and are thought to be part of an important Gallo-Roman necropolis. 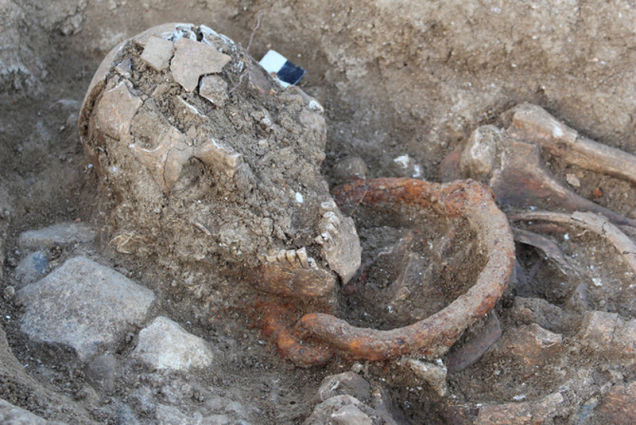 The amphitheatre, which featured battles between gladiators and wild animals, could hold between 12-18,000 people. The remains of the dead would be ushered through the "Door of the Dead" and buried in the nearby necropolis.


No goods were discovered in the graves, with the exception of a young child who was buried with seven vases dating to the second half of the 2nd century AD. The same burial, which is characteristically different than the other ones, also contained two coins, which were placed on the eyes of the child.

The archaeologists identified several individuals who appear to have been shackled. Four adults (three men and a subject of unknown gender) were found with iron shackles; three had shackles that were hot riveted around their left ankles and one had a "bondage collar". One child had a more rudimentary object riveted around his left wrist. Another individual was constrained by multiple devices. 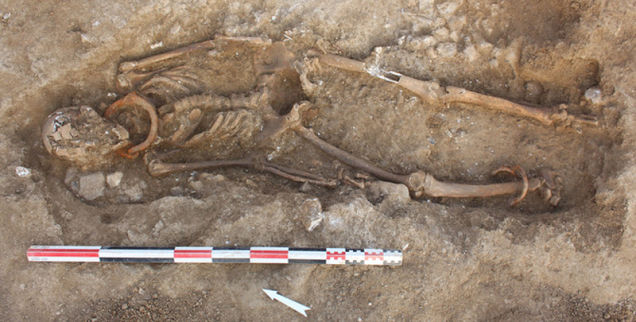 Specifically, four adults had hot riveted iron shackles on one of their ankles, with one also wearing an iron collar or yoke (pictured above) and one of the children was found to be wearing some sort of riveted restraint on its left wrist. Researches are currently analyzing the remains to determine the origins of the people and the circumstances of their deaths. Links to a few more sources can be found here.

I didn't know myself

Can you just explain? I can't watch videos at work.

The rivet is heated super hot and placed in the holes of the two points that need joining. A hammer with a concaved end pounds the super hot rivet to form a nail head. This joins the two sides of the metal object together.

That's how they were described. I believe the important distinction is that when the rivets were placed in the shackles they were red hot which I imagine would make them easier to deform?

posted on Dec, 4 2014 @ 02:47 PM
link
a reply to: Krazysh0thot riveting is just what the name implies.
The rivet is heated before being headed over , so that as it cools and contracts it pulls the joint more tightly together.
I have to say there is no way they could tell, after this amount of time that the joint was hot riveted.

I amazed at the condition of the shackles considering they're iron and have been in the ground for nearly two millennia.

posted on Dec, 4 2014 @ 02:58 PM
link
Riveting does show a serious level of ownership in my mind, now these people seemed to be uninjured which says they were not actually fighting but perhaps were part of the arena in a different way such as selling food etc to the public, but given the cost of metals they must of been owned by a rich family to allow them to waste good metals

Riveting does show a serious level of ownership in my mind

I'm actually not familiar with the specifics of the shackling practices of the Romans in the 2nd century AD (or any other century) but it seems that burying somebody in shackles demonstrates a pretty serious level of ownership in of itself.

posted on Dec, 4 2014 @ 03:11 PM
link
Thanks guys. I was unfamiliar with the idea and thought maybe it had to do with heating the shackle so that it fuses to the skin or something.

So once those shackles went on, they stayed on. No hope for gaining their freedom or citizenship for these slaves. I'll guess these were not gladiators or serfs held in economic servitude, but ethnic slaves held in perpetuity, including the children of those slaves.

posted on Dec, 4 2014 @ 03:18 PM
link
The way of riveting appears to show that the shackles were meant to be permanent, Romans had nasty 'keys' for shackles.
I'm sure there will be a lot of keeness to try to discover what was going on there.

posted on Dec, 4 2014 @ 03:19 PM
link
Also when the metal cools down it shrinks causing a lockdown effect, at the time they woudnt move or rattle, poor buggers, locked in shackles and third degree burns having them fitted!a reply to: theantediluvian

one scenario would be if they were killed in a war or a raid and there bodies couldn`t be recovered to remove the shackles before burial. whoever buried them probably didn`t know who the owner was and just buried them with shackles on.or the owner was killed too.

it says they don't know how they died but that dudes skull and chin are all busted up that might have something to do with how he died.


Good question, My guess there was enough to go round for those days, and this was not Italy, although France is also not a big producer of iron from natural resources either. So it's an economic question still. There was probably deals with other Germanic tribes, that part of what is now France, was taken over by the Romans maybe a hundred plus years before Julius Caeser. And so likely a very Roman part of the world then.
I should say that much later events were encomic wars, with coal and steel being the centre of attention shaping todays world.
edit on 4-12-2014 by smurfy because: Text.

Birth to death in chains... I cant even fathom it. Rome makes me sick. I cant believe people still worship the Romans like some perfect society.

And the shackles just ooze metaphor for the plight of the average human being... even today, though in a less literal sense (most of the time, anyway...).

It's rather sobering how much our collective worldview has changed in regards to human rights... in such a relatively short span of time... and how far we still have to go to treat everyone (and everything) with respect... or at the least, with a little kindness.