Something that I had always been puzzled about has finally been solved by Jon Ellison of the Graham Hancock Board (thanks Jon).

Now, what puzzled me about the above entry in Vyse's book is the very last entry: 'H. Raven and Hill'.

It seems that, according to Vyse's list of 'Inscriptions' (above), somewhere in Campbell's Chamber' of the Great Pyramid, there is an inscription 'H. Raven and Hill'.

No one, as far as I am aware, has ever mentioned seeing such an inscription but thanks to eagled-eyed Jon Ellison and Patrick Chapuis' photos of this chamber, this mystery is solved. There IS an inscription of 'H. Raven & Hill' in Campbell's Chamber (see below):

(Note: Image above is an enlargement of section of Patrick Chapuis image you can see here.)

what was the mystery of these inscriptions ? surely they wasn't made back in the tombs creation ? 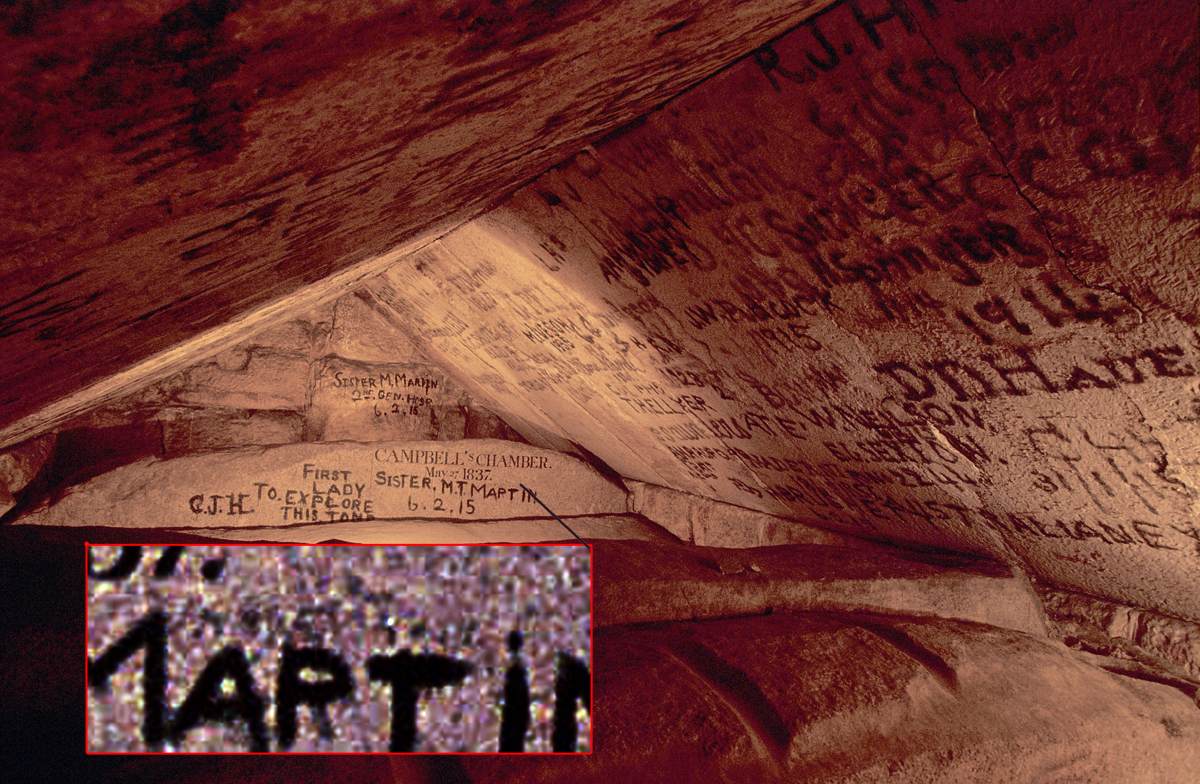 I am with funbox here. Good observation, I grant you, but what does that make us?

hmm , after looking at the picture im seeing a vanity parade ,im thinking there was some contention with who was the first to lay eyes upon it , and then surprisingly defile the place with their tags. not even the Egyptians defiled the pyramids so why should they ... sheer vanity

Raven & Hill were two of Col. Vyse's assistants when he was opening these hidden chambers in the Great Pyramid in 1837. In Vol II of his book (see image 1 above), Vyse indicates that an inscription 'H. Raven and Hill' had been placed somewhere in Campbell's Chamber. No one, however, had ever found such an inscription. Until now. Thus Vyse's list of Inscriptions is vindicated.

Nothing more than that is being said.

But you surely agree that this is more of a mere formality than a true "mystery".

thanks for the explaination

ha, his ego could only afford the usage of the spindly quill for his assistants names ..

I hope there's project to restore the tomb to its original state ? , surely there not going to leave all that graffiti over it

hmm I seemed to inadvertently killed you're thread , my apologies. a first for me I think .
was it the fact I accidently retorted to myself when it was supposed to be to you ?, or was it the mildly intense disapproval of tomb raiders ?, especially in this graffiti disrupting instance ..

originally posted by: funbox
a reply to: Scott Creighton

hmm I seemed to inadvertently killed you're thread , my apologies. a first for me I think .
was it the fact I accidently retorted to myself when it was supposed to be to you ?, or was it the mildly intense disapproval of tomb raiders ?, especially in this graffiti disrupting instance ..

No worries. To be honest I wasn't exactly expecting this to generate a lot of discussion. It's more really just an observation but an interesting observation at that.

crossing the eyes and dotting the t's eh , those missing jigsaw pieces , I see them , although in regards to another recent archeologically finding ,, the ancient city of Uruk I find such scanty detail, maybe you have had more luck !

last I heard there was an exhibition in Germany, have you heard anything new on this discovery ?

Excavators later removed several tons of fine sand to descend 33 feet below ground level to where they found the niches.

Zahi Hawass, the director of Egypt's Supreme Council of Antiquities, said archaeologists had been working for three months to clear sand from a granite shaft found between the pyramid of Khafre — and the Sphinx.
Hawass said workers will continue clearing sand from the shaft for a further 33 feet, where he believes more antiquities, including a granite sarcophagus, could be unearthed.

Various small tunnels do indeed exist both in and under the Sphinx. One large tunnel, going forty-five feet in two directions, lies at the back of the Sphinx,

Any information on those finds Scott