posted on Dec, 4 2014 @ 10:01 PM
link
Didn’t Mars have a greater gravitational field several millions years ago? It would seem like with all the craters on the moon the earth would be covered in moon rock if this theory is correct..
a reply to: Aleister

But that conflicts with research based on SEM results, not on just chemistry.

NASA's Mars Meteorite Research Team reopened a 14-year-old controversy on extraterrestrial life last week, reaffirming and offering support for its widely challenged assertion that a 4-billion-year-old meteorite that landed thousands of years ago on Antarctica shows evidence of microscopic life on Mars.

posted on Dec, 4 2014 @ 11:08 PM
link
If you based results on pure chemistry, then we know that carbon and amino acids exposed to extreme heat can morph with a chemical signature that mimics the signatures of life. So it could go either way, and it is sort of an Occam's to claim just organic materials.

However, when that research is backed up with a scanning electronic microscope that shows the physical forms that we know bacterium takes , well the pendulum swings the other way. 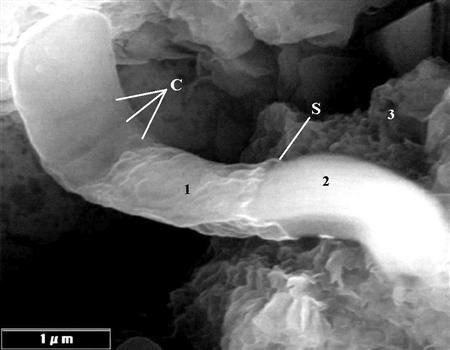 Sorry I didn't back to you earlier. Do you have a link to Jim Oberg's thread?

This is quite interesting. If for no other reason, it is interesting to watch the Astrobiological Dueling Banjos, as made famous in the movie Deliverance:

But, just as in a later scene in that same movie, it remains to be seen which camp finally ends up in the unenviable position of "squealing like a pig."

The article you linked to concerns the extended work done by the David McKay (RIP) team. It looks like they did a good job in answering those critical of their earlier work. However, the Main Stream Media peer review process apparently didn't take much notice.

This 2014 research took a different tact. They addressed some of the issues with the 2012 work that indicated that all organic compounds found in mars rocks were graphitic in nature, and igneous in origin. By examining the organics found in fissures in this particular rock sample, they came to the conclusion that their analyses indicated it "was infiltrated by organic-rich fluids that led to the deposition of organic matter in the shock-induced fractures and cleavages."

All the teams that analyzed that sample were cognizant of the chance that the meteorite may have had some contamination, this is why the research was done in the center of the mass. This teams conclusion is really an assumption, as other teams deemed that any contamination could never get that far into the structure in the estimated thousand of years it had been on the ground.

Richard B. Hoover, Ph.D. NASA/Marshall Space Flight Center, found, what he is positive are , cyanobacteria in 3 other CC meteorites. (Alais, Ivuna, and Orgueil CI1 carbonaceous meteorites).


Richard Hoover has discovered evidence of microfossils similar to Cyanobacteria, in freshly fractured slices of the interior surfaces of the Alais, Ivuna, and Orgueil CI1 carbonaceous meteorites. Based on Field Emission Scanning Electron Microscopy (FESEM) and other measures, Richard Hoover has concluded they are indigenous to these meteors and are similar to trichomic cyanobacteria and other trichomic prokaryotes such as filamentous sulfur bacteria. He concludes these fossilized bacteria are not Earthly contaminants but are the fossilized remains of living organisms which lived in the parent bodies of these meteors, e.g. comets, moons, and other astral bodies. Coupled with a wealth of date published elsewhere and in previous editions of the Journal of Cosmology, and as presented in the edited text, "The Biological Big Bang", the implications are that life is everywhere, and that life on Earth may have come from other planets.

A cool thing about Murchison, you can put a piece in a jar, just about 10 or 20 grams, leave it alone for a few months, and then unscrew the cover and take a whiff of 4+ Billion year old methane, and you can smell it.

I think the evidence is overwhelming that these meteorites have already shown us that life exists elsewhere in the solar system.