posted on Dec, 3 2014 @ 05:36 AM
link
For some reason i've been feeling all sociable and informative recently. I really don't know what's wrong with me but i'm just going to go with it, and make another survival thread

I totally gushed over Birch Polypores a day or so ago, but they are not my favourite fungi...

That honour goes to:

Also known as Horse Hoof Fungus, Tinder Hoof, and False Tinder Fungus (to differentiate it from Inonotus Obliqus, otherwise known as True Tinder Fungus or Chaga), this stuff can be used in a few different ways to help with fire lighting.

Fomes fomentarius is a tough perennial polypore that usually becomes hoof-shaped with age; it is found on standing and fallen hardwoods. Its woody upper surface develops grayish zones, and its brown pore surface features tiny round pores. When sliced open (no easy task, given its toughness) it is usually composed more of vaguely layered tubes than flesh.

Tinder-Hooves are found throughout Europe and North America. I've only ever seen these grown on Birches, though experts say that they also grow on other trees - in the South of England mostly on Beech and Sycamore - but note that in the US, the Sycamore is a different tree entirely, i think you guys call it a Plane.

Thing to remember is that if it's got a few fungi on it, the tree is dead or dying, so be careful around it as the tree may be a whole lot weaker and more susceptible to falling/dropping a branch on your head than you expect

These ones look to be growing on an old Acer Pseudoplatanus, or a UK Sycamore. 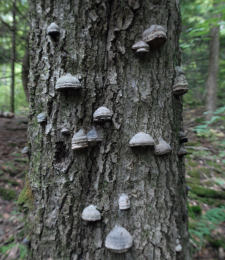 Pic from "Roger's Mushrooms", well worth a read

They don't come off the tree easily. They are very woody and tough, entirely inedible and you will need a strong knife up to being used as a saw or lever to remove a decent sized one - and a small one wont do you much good, so leave the little ones to mature.

Here are three i picked - they dont grow as profusely as Birch Polypores in my area, but i have visited some Birch woods where they are bloody everywhere! 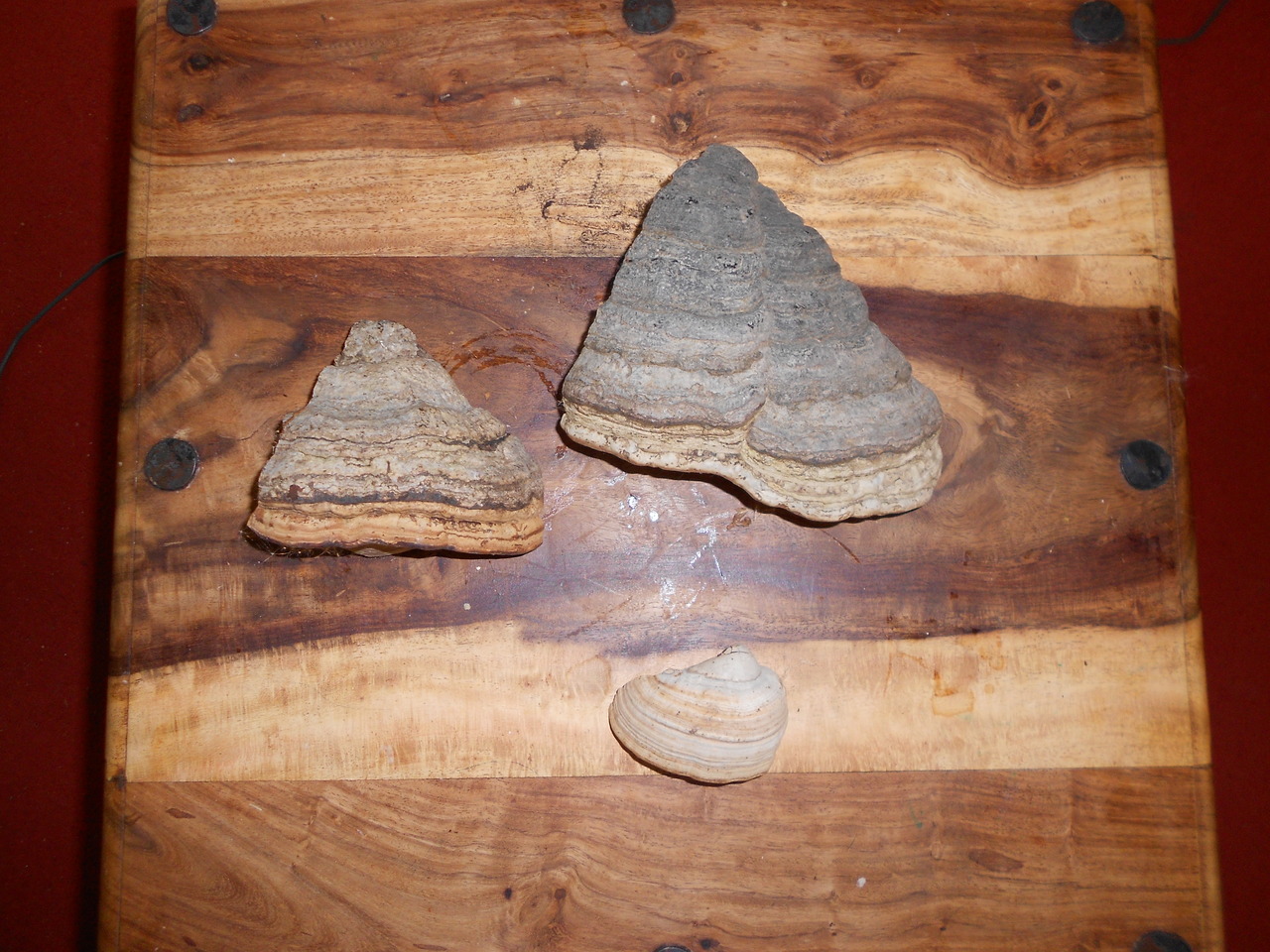 Inside they have a growth-ring structure, and once dried they become very woody indeed. However, by using the growth rings (horizontal) and the fibre structure (vertical) they are easy to cut and prise into sections. 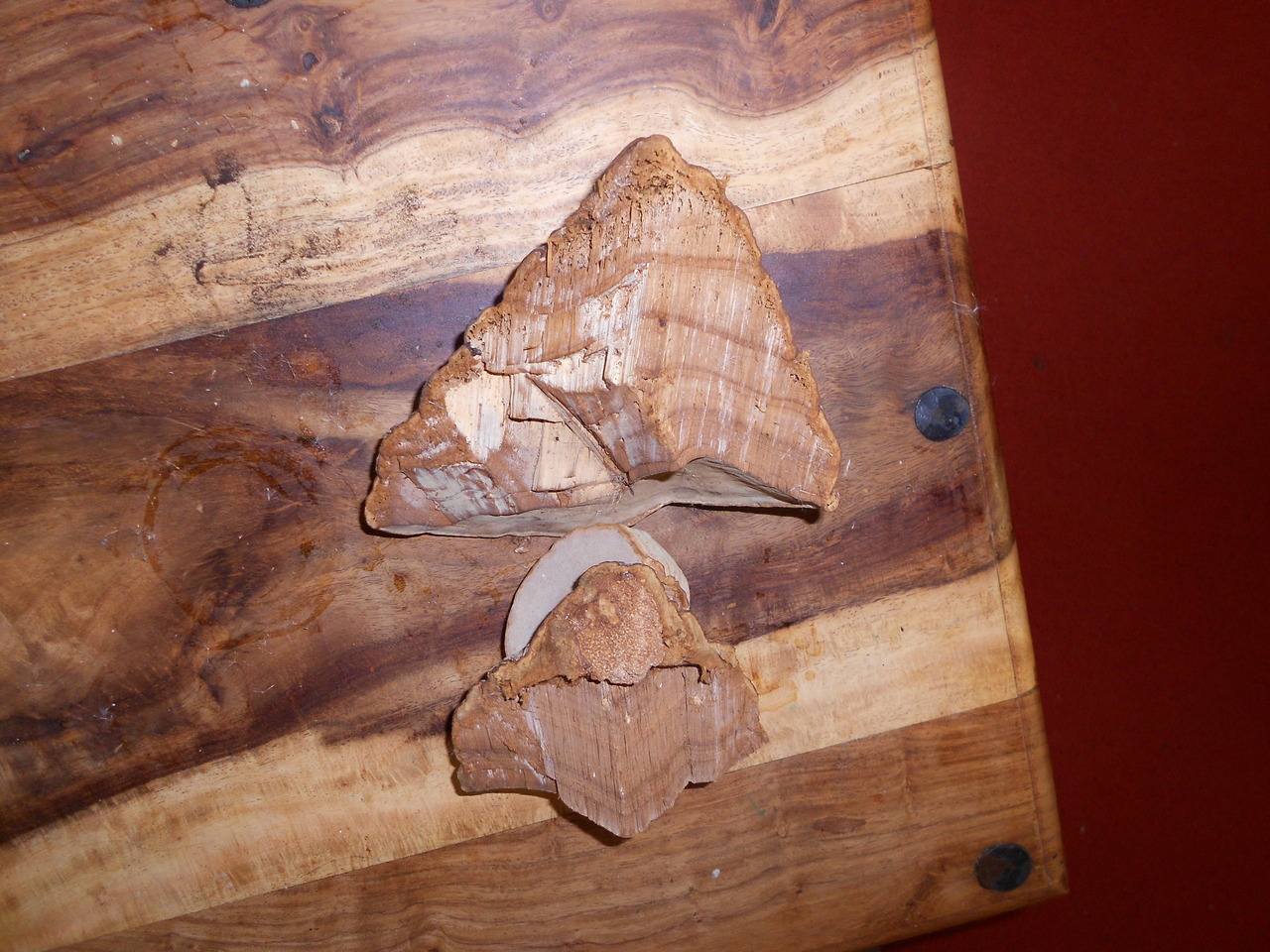 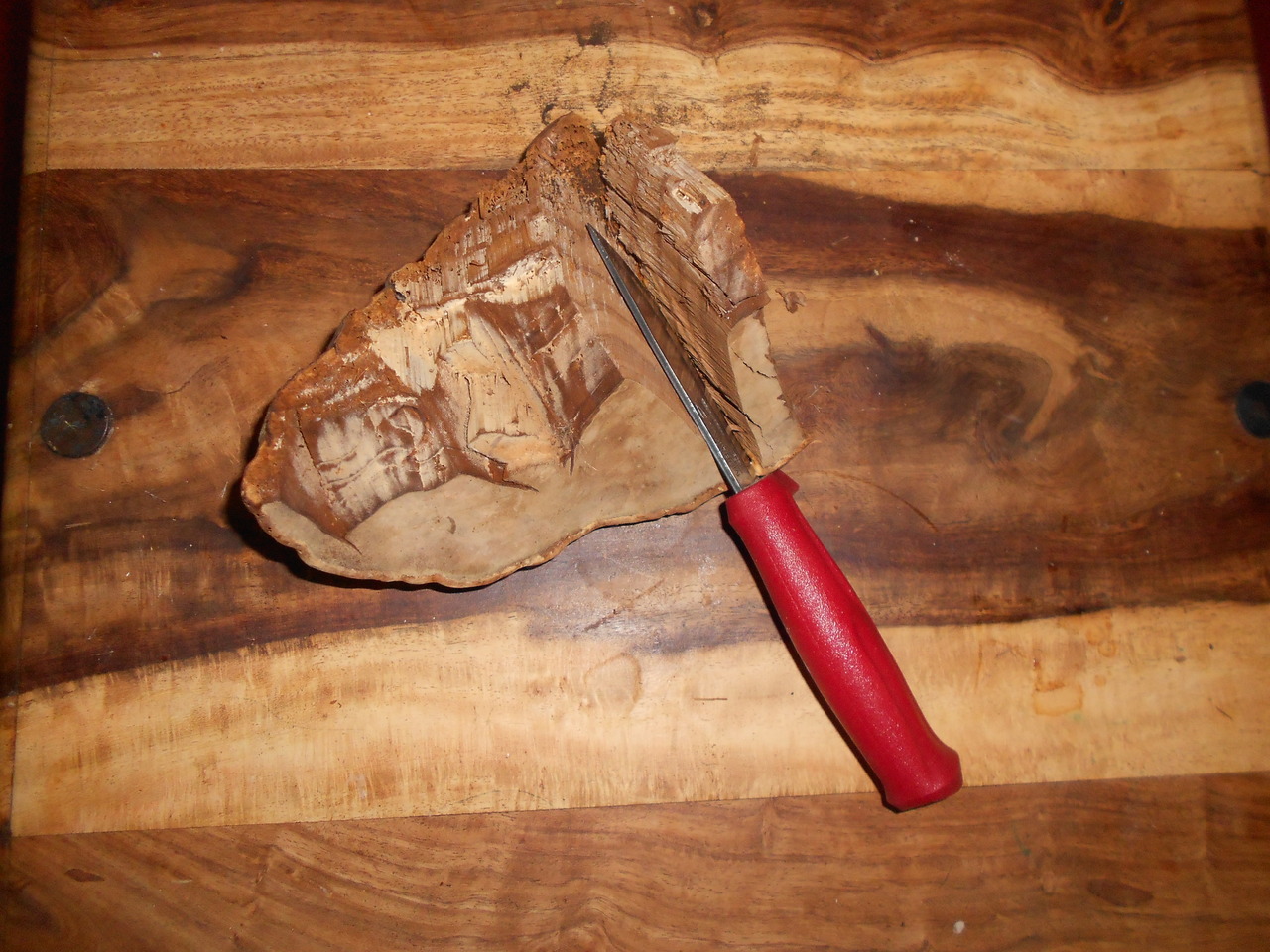 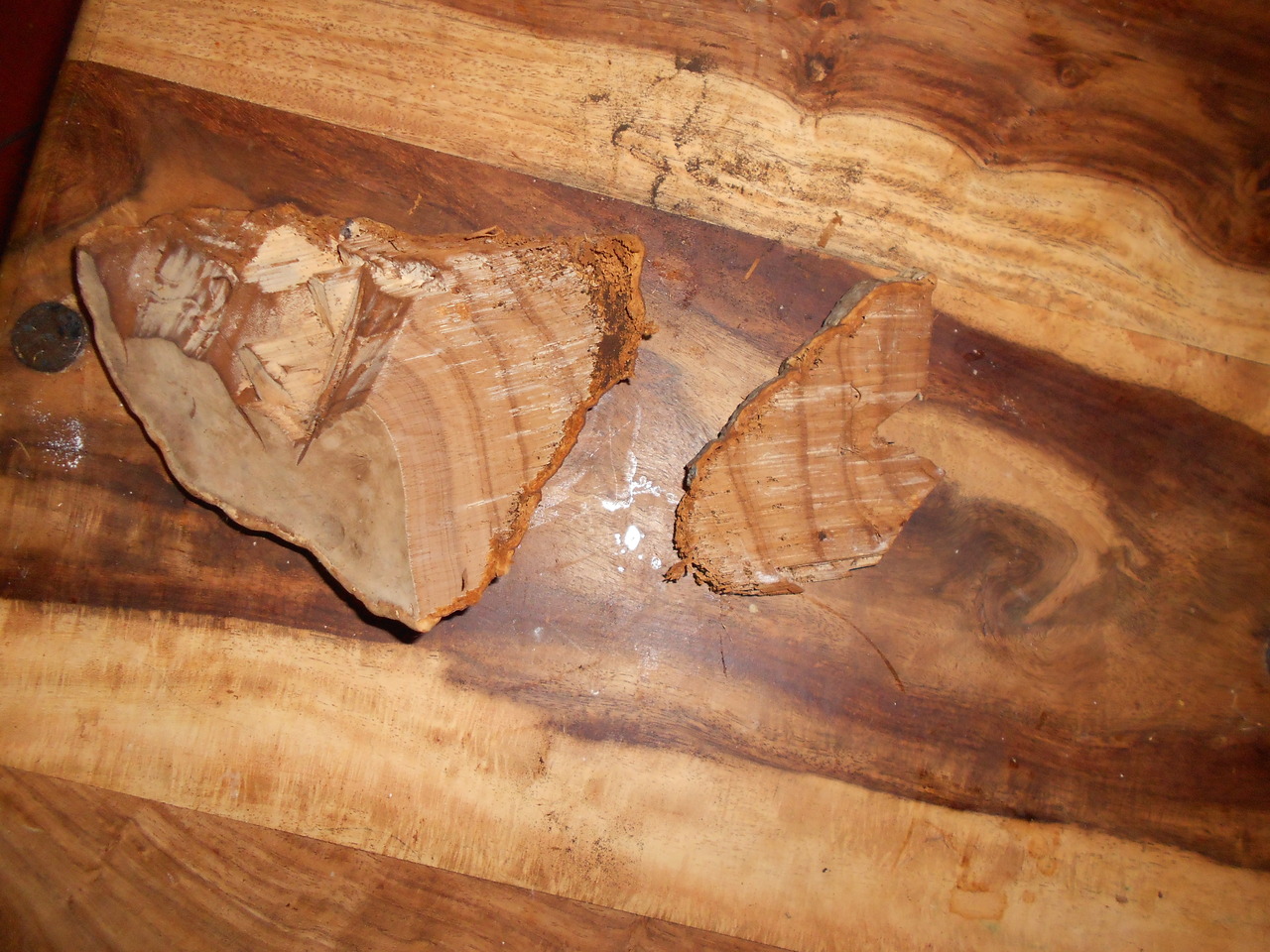 And by adding a notch and shallow bowl to a slice like the one above (on the right) they are superb hearth boards for drill fires - i had a total novice student of 16 make an ember (and then a fire) via bow drill in about a minute without even breaking sweat (from a dried slice).

There are other ways they help with fire lighting too.

You can cut away the hard outer surface (do it when fresh otherwise it's a major chore) and then remove the woody material to get the inner skin/cambium like layer and then beat it with a stick (etc) untill it becomes softish and felty/leathery. 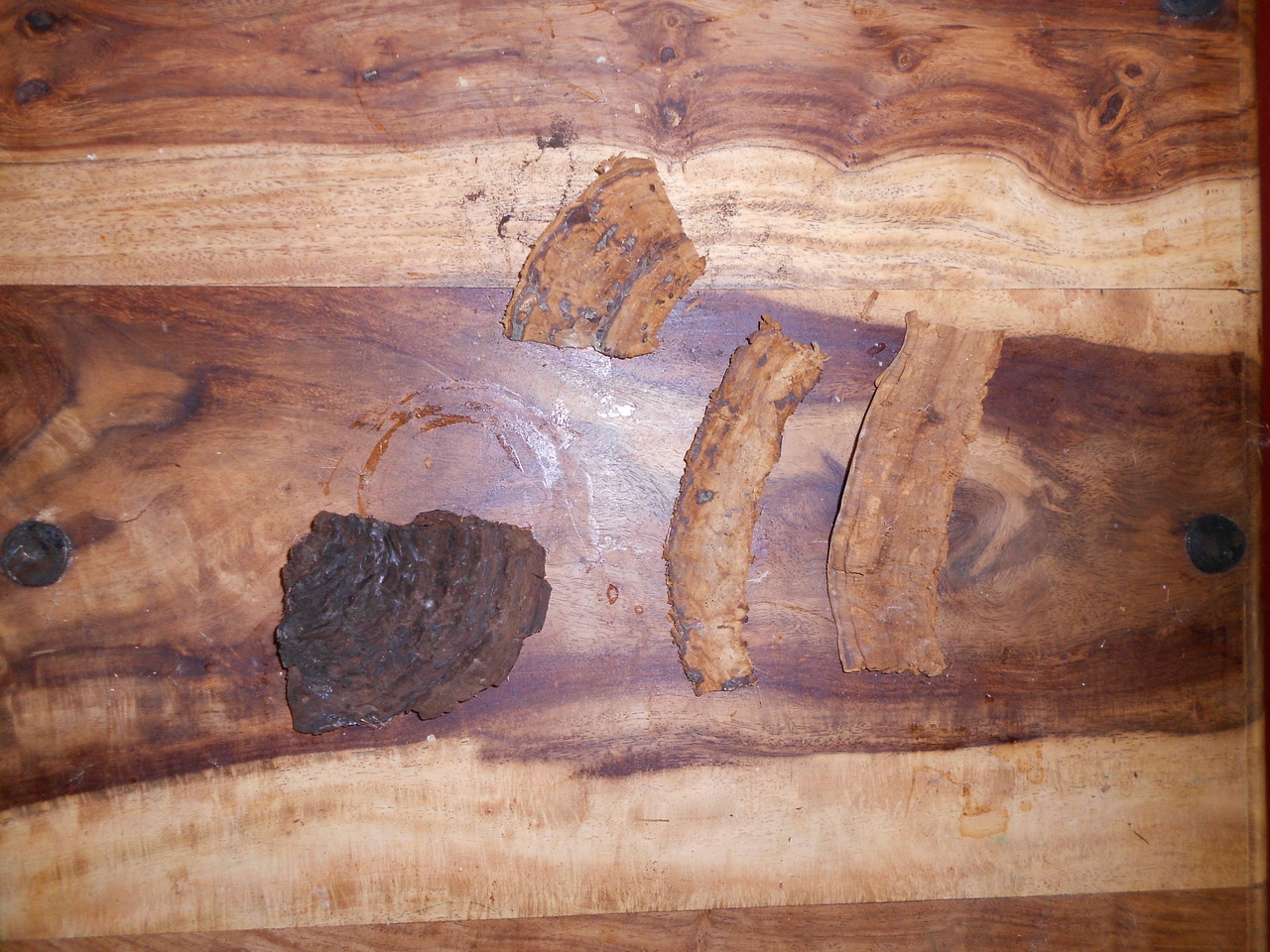 Now i've read experts suggest that at this stage you should boil the stuff in wood ash and water for a few hours to soften it.

In my experience, that's totally the wrong thing to do, it turned my near flexible piece (on the left, above) into a rigid, useless slab. The two long examples on the right are unboiled and about halfway through the beating process. It will feel a bit like suede or buckskin when ready.

Instead i just beat it for a couple of hours with a stick until it got soft and almost a bit fluffy in it's surface texture.
Then scratch/rough-up the surface with a blade to make some fluffy material and this will take and hold a spark very well indeed.

Only a small amount is needed, and you can either prepare a little pile of the stuff for making an ember, or do it directly on the strip of felty Fomes skin and quickly put it out once you have your tinder nest lit. A little really can light a lot of fires.

Now, i'm more of a Bow-Drill man and i'm not great with flint and steel. This ember (which needs to grow prior to being put in a tinder-nest) was made with a Swedish fire-steel: 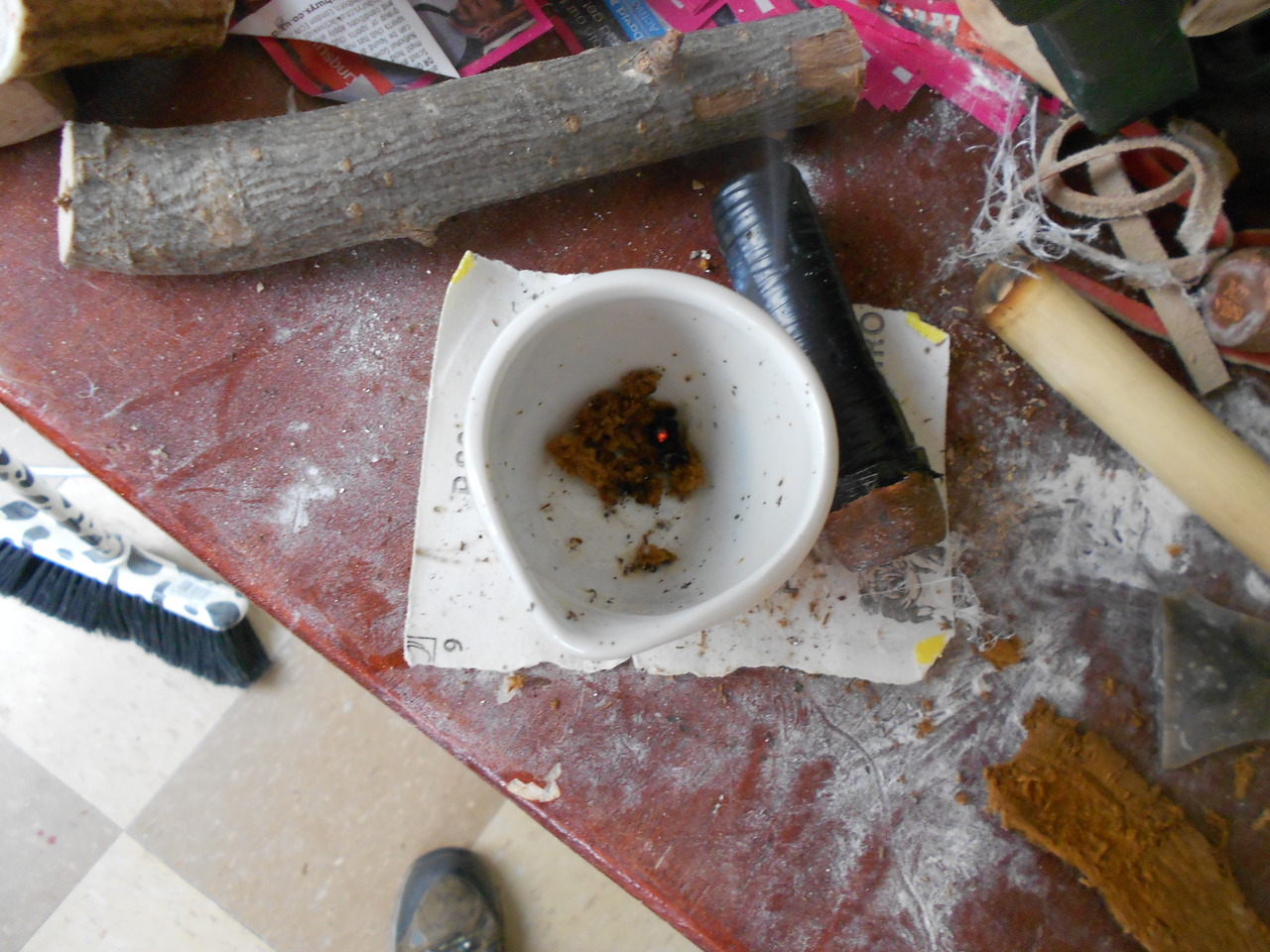 But it was no fluke, here's another: 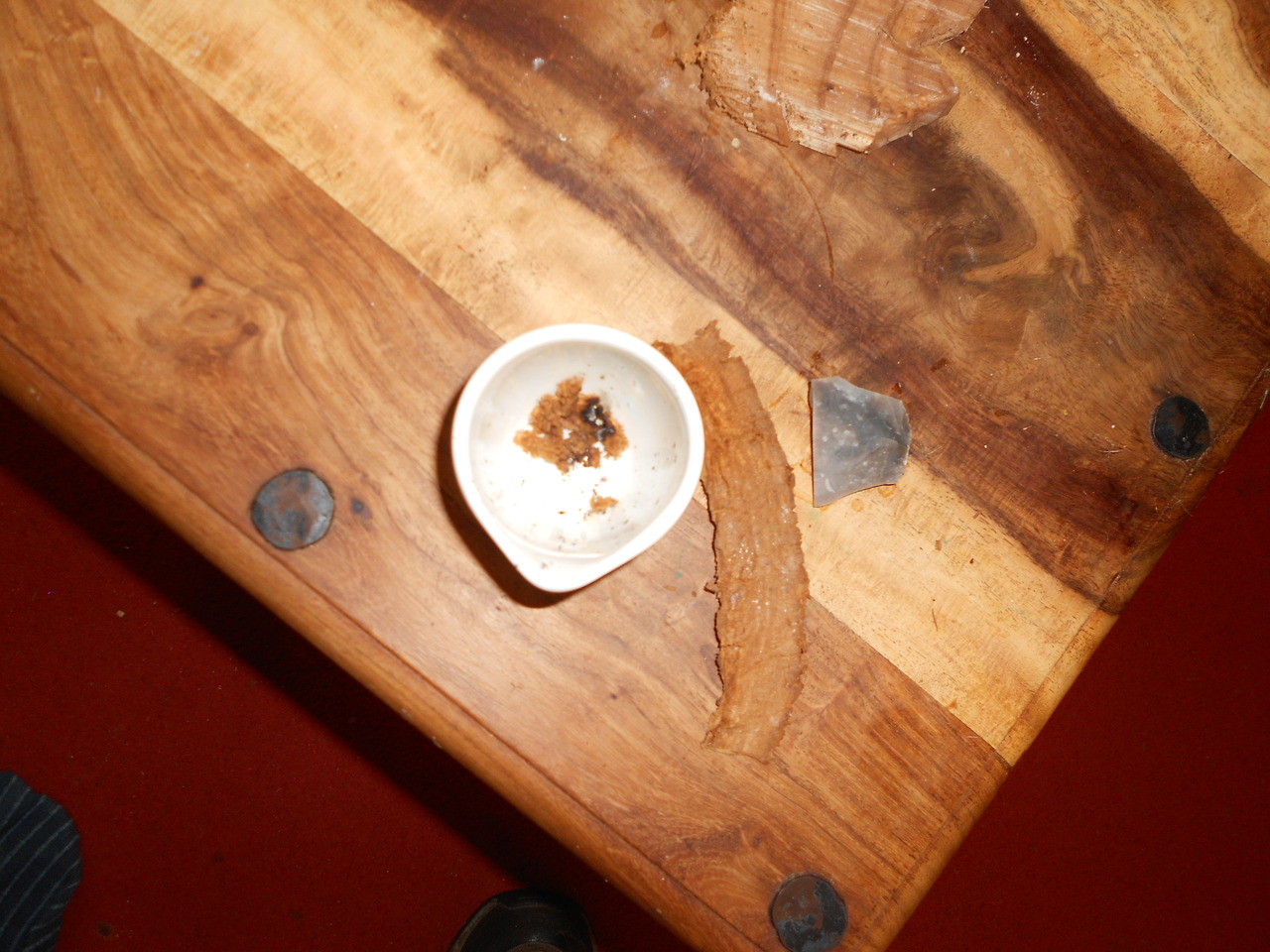 You can rough up the surface with a sharp stone, no knife required


So that is with a dried, prepped example - but it can be used as an ember catcher, and even an ember carrier to use later on - from fresh, with another method:

At the top of the fungus, above the woody growth rings is an already felty layer... 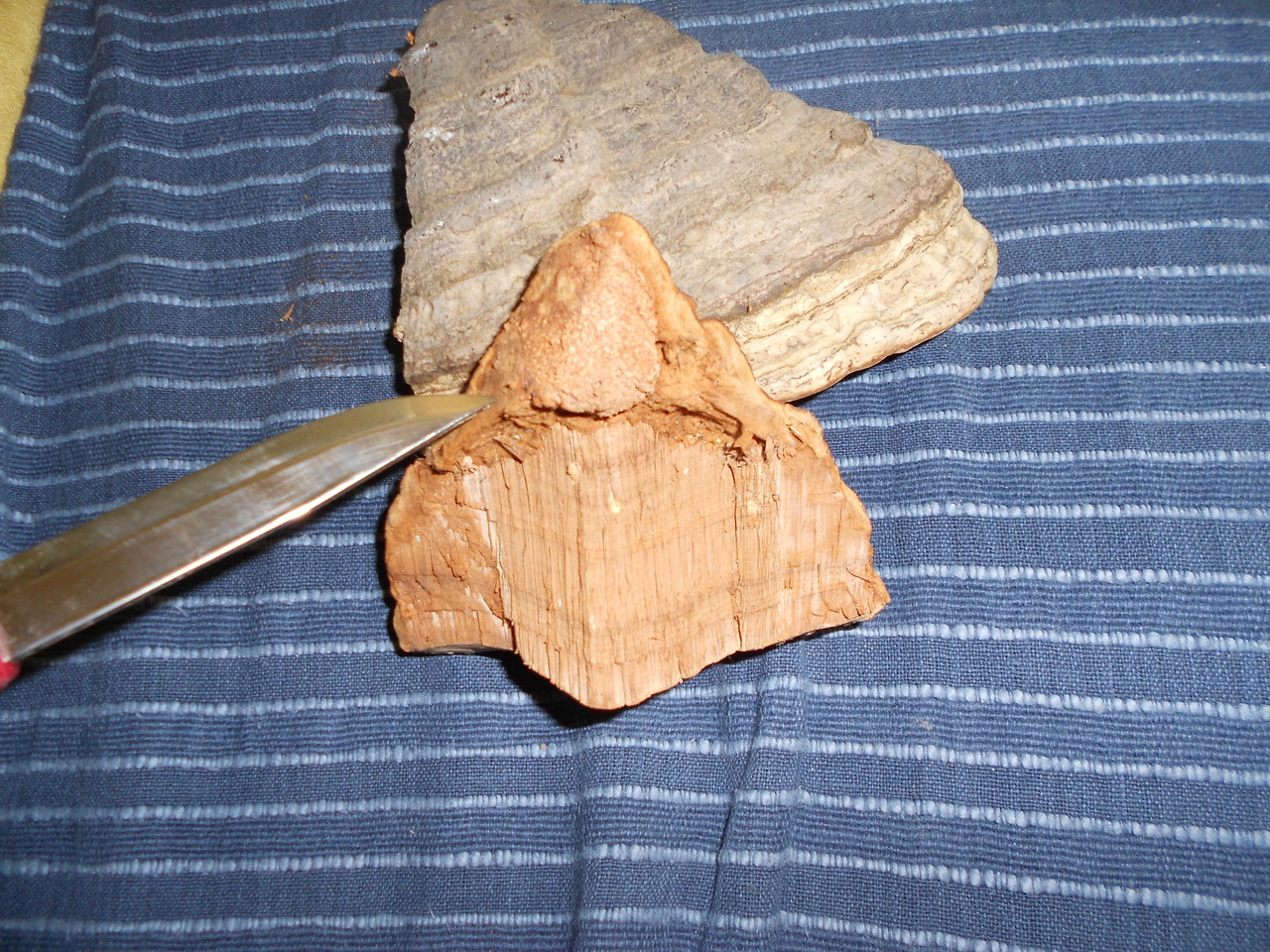 Cut out a slice and preferably remove the outer skin with your knife and rough up the felt with your blade. 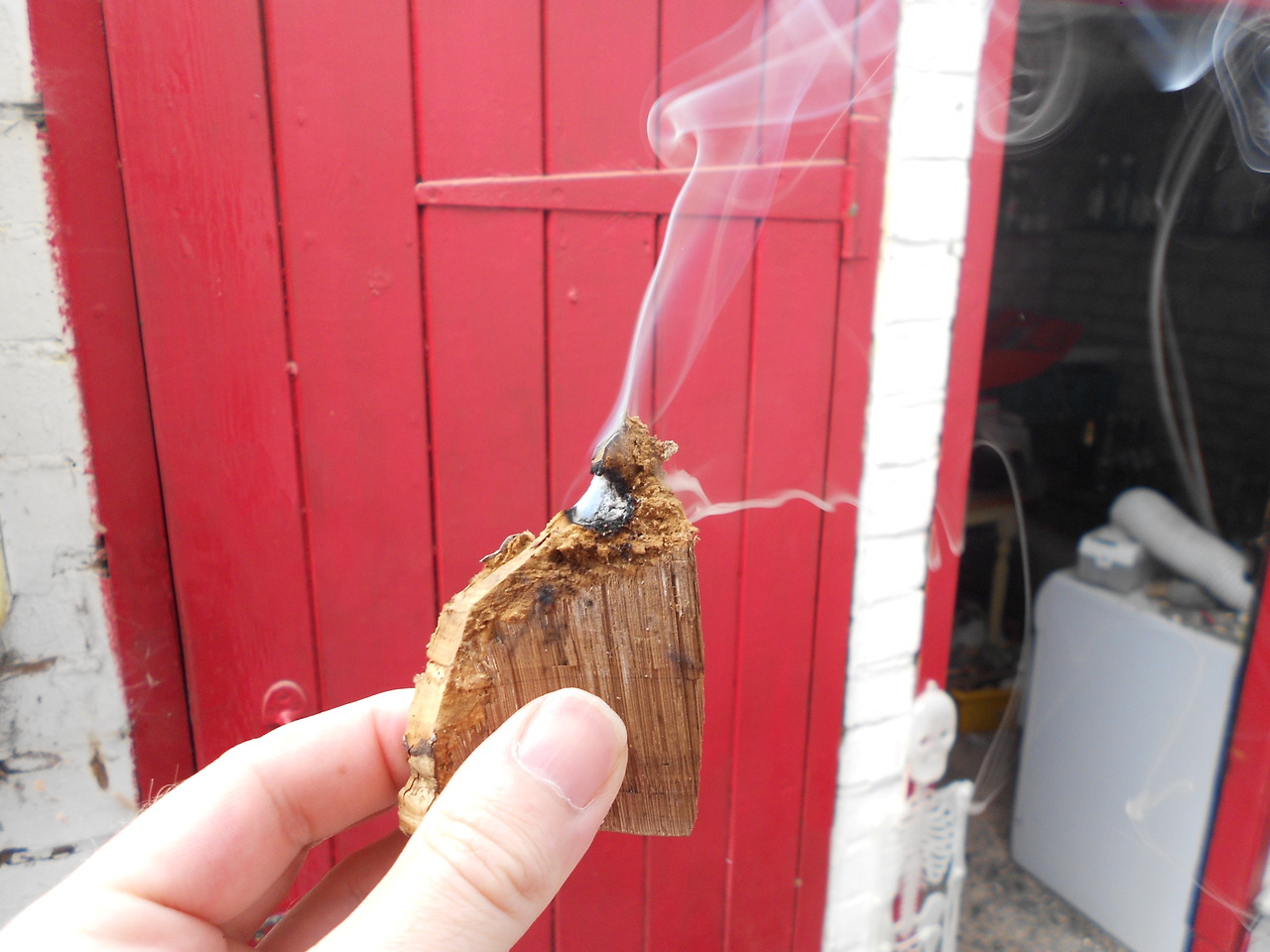 And it will just smoulder away slowly 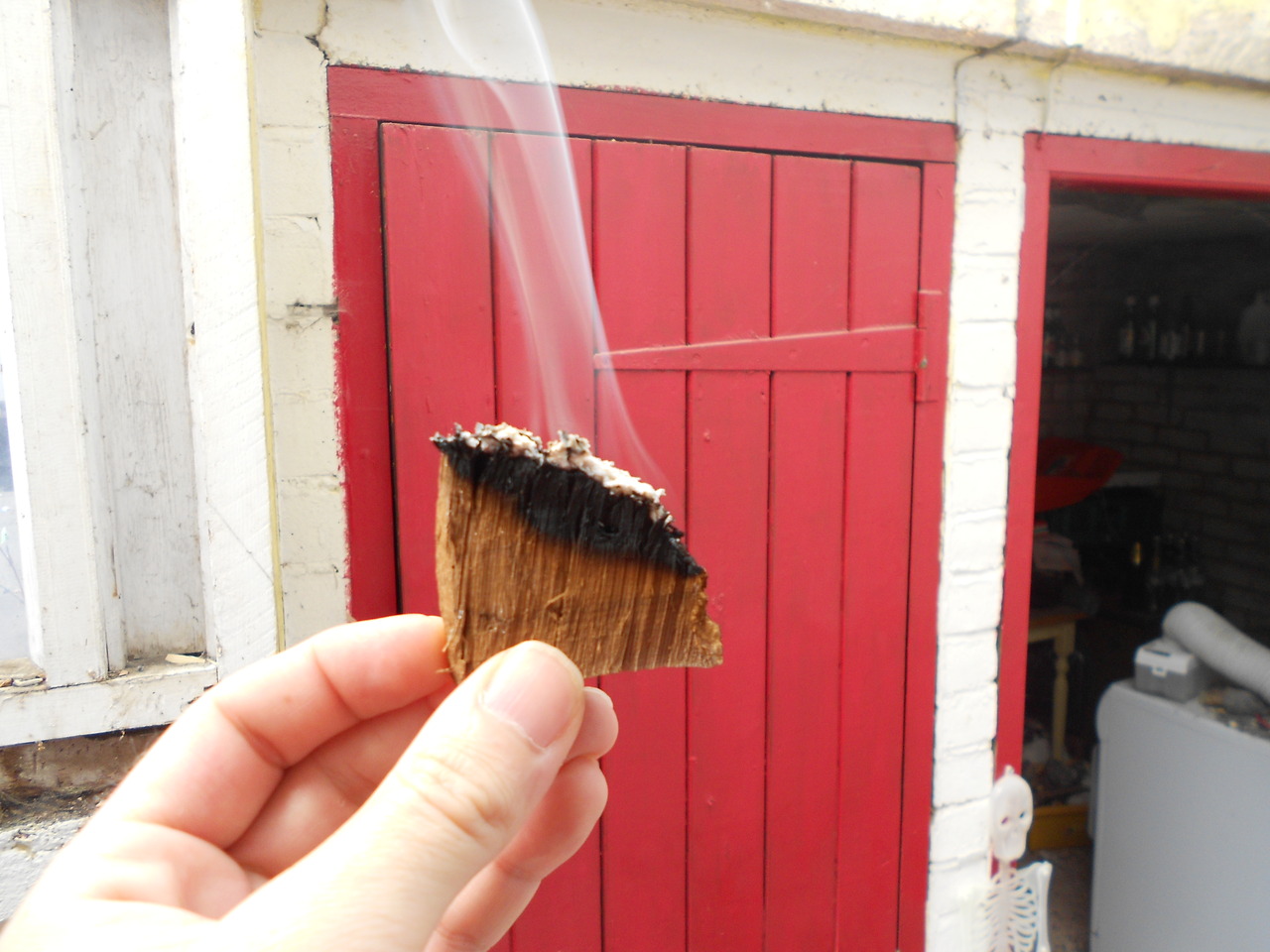 This is after about 15 mins - retard it's oxygen supply a little and store like in my Birch Polypore thread and start a fire with it later. You will need to practice this though.

You can even use the felty skin to make Amadou if you are really crafty, and make wearable items! 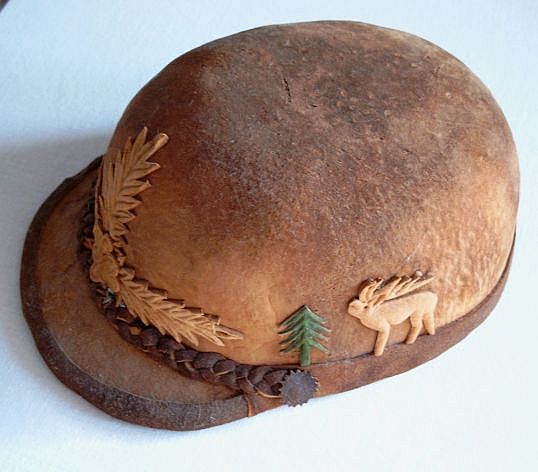 It's a pretty remarkable fungus!

It definately makes excellent tinder and have used it myself many times in the past.

They are actually old photos and now i have a new coffee, bah! TEA table and my son uses it as a bedside thingy - he has a special attachment to as as he used to have TV dinners on it. It's useful for pics though as the stains from mugs of yummy rosy-lee add scale

posted on Dec, 3 2014 @ 02:36 PM
link
Despite the hiss, this is actually a fairly good vid in showing you what you are dealing with, material wise and how it's a woody PITA when you first handle the stuff.

I would not have chiselled the woody inner out like he did, but remove slices to use as hearth boards and ember carriers, but his end product of felty amadou (the cambium/inner bark layer) is pretty good.

This guy is a bit more practiced, a very useful vid

posted on Nov, 9 2017 @ 11:31 PM
link
Great post. Was out looking for this a few days ago (easy find when you have the right forest and know what you are looking for). Didnt dry it out so I failed miserably(even if one sample was fairly dry straight off the tree)! Will try drying it out next time!