is that fish channeling the vibration frequency of life?

Nearly posted that in Philosophy and metaphysics forum
So here's my very uneducated post on a fish and on the Universe!

Some of you guys probably already saw that video. This amazingly disturbing fish is an artist.
artist fish (sorry couldn't find the video anywhere else than facebook. got the embed code for it but don't know how to use it)

He creates a pattern on sand to attract ladies.
As an artist myself I was deeply disturbed by this little genius. If a fish can create art, who are we? Artistic creation is supposed to be the exclusive appanage of humans, maybe chimps... but not a fish!

This was my first egoistic thought. Then I looked closer to the actual pattern and dang! it reminded me of the resonance experiment:


And here is my point:
The Universe is nothing but the expression of multiple vibratory fields of various frequencies.
Sound is a vibration propagating in the form of a wave. Light itself is a complexe mix of particles and waves (see wave particle duality and the Young slot experiment) -digression- and by the way could it be that the particles of light are actually perturbated by a vibratory frequency? -

By the way have you ever had that sleep paralysis thing? When this huge surge wave goes through your body just before you OBE? It's all about vibratory fields. Life, matter sticking together, after life.

I wish I could muster more words than "wow". But that pattern made by the fish is just, wow. I'll read into some of the sound testing done on my break later today, hopefully I'll have a better response by then!

I dont know about channeling the universe, but the nests are a way to catch the eye and impress a mate. Many species work to create interesting nests, and puffers are quite the neat builders!
Bower birds can create some wonderful nests, and I also had a species of Gourami (dwarf) that knitted a nest! I kid you (k)not. He spent a week building what's known as a bubble nest, bubbles that he blew up into a woven mat of floating plant matter. It was quite the site watching him beavering away.

Here's a gourami bubble nest, sorry not the best photo, and this guy is a messy builder, but it all depends on what is available to them at the time, sometimes the just make a floating raft of bubbles! 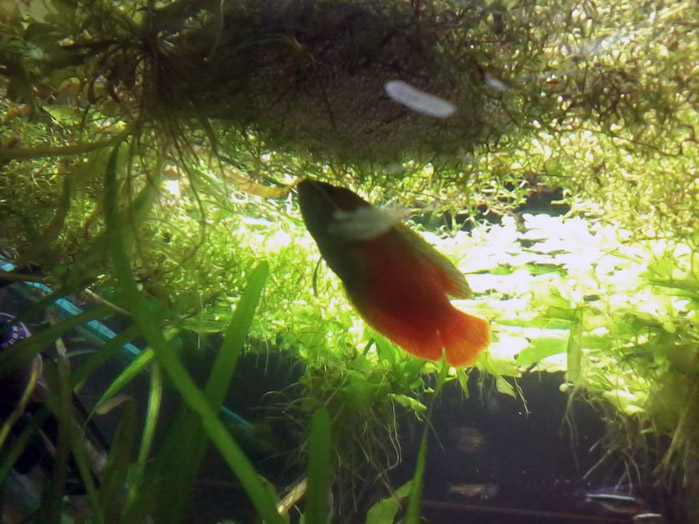 (Not as pretty as a puffer nest, but still awesome, by the way, they fertilize the eggs mid-water, then catch them and blow a bubble around them and float them up into the nest

So not really the universe calling, more like booty calling.
edit on 2-12-2014 by Qumulys because: (no reason given)

Everything, ultimately, is all about the booty.

posted on Dec, 2 2014 @ 05:48 AM
link
Ever seen a spider web? And that is just a tiny arachnid with hardly a brain. There are a lot of fantastic math/patterns in nature. I'm sure there is something to it.

Is it an expression of a conscious decision? Well, then fish don't create art. Or do they have a conscious mind? Then it would be a crime to keep them in a small tank.

Is it the unconscious instinct to create symmetry? Well, then the fish created art. But most of what humans call "art" wouldn't be art, just some random pictures of people and stuff, sometimes in 3D..

Is art in the eye of the spectator? Well, then the fish created art. And even some of the things humans did might be called art.

posted on Dec, 2 2014 @ 05:57 AM
link
Found this vid " Why do many natural phenomenons elude from conventional explanations of natural sciences?
At the Quantica Symposium Dr Rupert Sheldrake explains the origin of the materialistic world view and why this isn't capable of describing observable effects like telepathy, for example.
Instead, Sheldrake's hypothesis of "morphic resonance" can illuminate other phenomenons of communications. Thus he describes rats having learned to orient themselves in a maze seem to pass what they learned to conspecifics outside their own group. Even with humans this effect can be observed."

posted on Dec, 2 2014 @ 06:00 AM
link
It's amazing to see the range of imagination, creativity and ability of expression we all have, across species, when it comes to tapping some @ss.
Makes me feel connected to the universe and all it's creatures.

posted on Dec, 2 2014 @ 06:16 AM
link
Cymatics are extremely fascinating, you wonder if the whole science based on "nothingness" and "void" is the real description of our universe (imho it isn't).
That fish is really closer to an artist drawing an immense picture (compared to its size) rather than a vibrational plate. Needless to say it's awesome

Nature IS a vibration, a very complex one, we just don't have a mathematical model to simulate it correctly so we fall back on nonsense models that can give some arbitrarily accurate results. Also, nature is not at all random as QM implies, it's precisely ordered and just because we don't know how to understand it doesn't mean we need to label it like that.

I totally get your point.
There are reccurent mathematics in structures built buy animals. And animals also have many tricks to attract opposit sex, such as crafting, gathering of colorful items, dance, singinging...
But I am talking specifically about this pattern here presented by this specific fish... and I am connecting it to wave frequencies.
This design can not be the fruit of a complex thinking process, or the result of a choice of graphic expression by the fish. It must be much more "raw" than that. Therefore my theory : )

It really looks like a cell with spermatozoa swimming towards it !

thats impressive never seen this before

originally posted by: Logiciel
... Then I looked closer to the actual pattern and dang! it reminded me of the resonance experiment ...

No "channelling" required , just flapping his fin in the same spot at a constant rate for a prolonged period , ( not necessarily "3835 Hz").

Everything, ultimately, is all about the booty.

Yes it is. And I wish we could all just make love and not war. We would all be artists.

posted on Dec, 2 2014 @ 10:13 AM
link
a reply to: Logiciel
Sharks and other fish have electromagnetic field sensors and can sense living things, electromagnetism is the language of the universe, perhaps this fish is simply following something it can sense that we cant perceive?

These two pictures aren't even similar. While the fish in itself is neat, the "art" it creates will only be a reminder of cymatics and nothing more.

Animals often exhibit patterns in their thought process more than humans do. If a dog chased his tail long enough on the beach, a pattern would form.


originally posted by: Logiciel
... Then I looked closer to the actual pattern and dang! it reminded me of the resonance experiment ...

No "channelling" required , just flapping his fin in the same spot at a constant rate for a prolonged period , ( not necessarily "3835 Hz").


Do you mean Rupert I-blew-my-mind-on-L-S-D Sheldrake ? , who thinks dogs are telepathic ?.

my dog just looked at me and said
"yeah that guy" but said it with his mind...

originally posted by: Logiciel
And here is my point:
The Universe is nothing but the expression of multiple vibratory fields of various frequencies.

Sound is a vibration propagating in the form of a wave.

Sound is a wave of mechanical stress propagating in an elastic medium.

Light itself is a complexe mix of particles and waves (see wave particle duality and the Young slot experiment) -digression- and by the way could it be that the particles of light are actually perturbated by a vibratory frequency? -

Light itself is a wave of electric and magnetic fields looked at one way, a stream of photons if looked at another. And the phrase "particles of light are actually perturbated by a vibratory frequency" doesn't make sense.

Frequency means the number of times something cyclical happens per second. Nothing more. There is no magic frequency that is the essence of creation. Or life. BTW, the Chladni patterns you see on the plate are a function of the plate's size, shape, stiffness, and where it's being driven. The sand gathers at the areas that aren't flexing. It's not some magic display of what a frequency looks like. It's how that particular plate flexes when driven where you see the screw. Any changes, and it'll look different.

It's all about vibratory fields.