Unless they aren't testing it and that's a convenient cover story.

posted on Dec, 2 2014 @ 08:45 AM
link
If it was a jet zooming past glasgow at 7.30ish on a Saturday night which I very much doubt. Would the bangs keep going for little over half an hour. With long pauses of silence in between. Don't think so. But I'm as keen as you to find out

It depends on the speed, altitude, and quite a few other factors.

well the atmospheics were good for sound to travel ,
i have heard firework sounds travel a long way on foggy nights.

that being said ,its a heck of a coincidence that it happens on the same night in a 5 hour timeframe in different continents.

originally posted by: Zaphod58
a reply to: jimbo78

It depends on the speed, altitude, and quite a few other factors.

I've read in the past that those pulse engines can be heard for thousands of miles away because of some atmospheric magic.

The thing that doesn't add up is that I when I think pulse, I think Aurora. Aurora was supposed to be cancelled, correct?

Isn't all the REALLY cool stuff supposed to be silent?

PDEs never hit big. Their one test airframe never got anywhere near what it should have according to the models.

As for being silent, they're still working on quiet boom technology. They've made serious progress, but it's not ready for primetime yet. You can make engines nearly silent in normal flight, and mitigate somewhat the sonic boom, but not get rid of it entirely yet.

Thanks for clearing that up, mister.

www.youtube.com... If this guy would shut up in this video it would sound just like the recording.

Is that what you all heard last night????

Doesnt even have to be AA guns firing. Regular rapid fire cannons would suffice, especially if you got plenty of them firing at the same time... Here's another video: www.youtube.com...

If it was only heard in the area (and sound can travel quite a bit) its highly likely to be weapons. But of course if its heard all over the place... not so much.
edit on 2-12-2014 by merka because: (no reason given)

posted on Dec, 2 2014 @ 11:38 AM
link
I heard them too.. i live near warrington and could hear them really well.. they sounded like very loud yet far away fireworks, or something like a pulse jet sound.. only it was to sporadic ??? no particular pattern ? very strange indeed.
Thanks for the post

posted on Dec, 2 2014 @ 11:39 AM
link
I found this article interesting, not sure if it has anything to do with this or not. However the incidence of interference with wifi speeds and problems might be explained? I too have had wifi issues, I did not however hear the phenomena described in this op but then it is hard to tell if it is a noisy plane or something else, Southwestern Ontario Canada here.
Is Russian Mystery Object a Space Weapon?Is Russian Mystery Object a Space Weapon?


The orbital maneuvers of a mysterious object Russia launched earlier this year have raised concerns that the satellite may be a space weapon of some sort.

The speculation centers on "Object 2014-28E," which Russia lofted along with three military communications satellites in May. The object was originally thought to be space junk, but satellite trackers have watched it perform a number of interesting maneuvers over the past few weeks, the Financial Times reported Monday (Nov. 17). 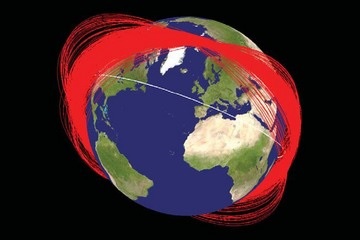 Orbits of debris generated one month after a 2007 Chinese anti-satellite test; the white orbit represents the International Space Station. In May 2014, Russia launched a mystery object that some experts say could be an anti-satellite weapon.

www.youtube.com... If this guy would shut up in this video it would sound just like the recording.

Is that what you all heard last night????


There are certain moments in this video where the sound is coming from a long distance and it sounds exactly to what I heard along with my mother, auntie and sister.

posted on Dec, 2 2014 @ 01:16 PM
link
I'm pretty sure the catterick explosions are tied into this something happened to the a1 and six miles was shut down for hours, anyone heard any more about this?
edit on 2-12-2014 by MediToker because: (no reason given)

posted on Dec, 2 2014 @ 01:18 PM
link
Most of the videos i've watched just sound like fireworks going of, i heard absolutely nothing in Coventry, West Midlands.

It IS NOT Fracking, I really wish you people would quit blaming EVERYTHING on Fracking. Fracking is not going to cause the same sounds thousands of miles away! Especially in NY and England at the same time.

If anything, this is more Government BS with their fake alien invasion set to come soon. There will be Aliens alright, Alien to you, not to a person who knows the Bible, the book of Enoch and the real history of what happened before the Flood.

Most of you have no comprehension of how crazy it really was back then, it is coming back soon, yet this time it will be worse, much worse. If you inspect the ancient Egyptian Hieroglyphics all over Egypt you will see the Giants everywhere. assets.inhabitat.com...

In the Luxor their are pictures everywhere showing the Giants carrying these huge stones with normal size humans in the same picture, it even shows one carving his likeness out of stone in front of an entrance. That very statue is huge!!! Twice the size of two 6ft men as shown in another painting of the same entrance construction.

Notice the massive entry ways everywhere. They are that size for a reason. Moses and the Jews were escaping the Giants and their evil fathers. Moses and the Jews went to what is modern day Israel. The Giants were all around them. In the northern land of Canon and south in the Gaza area. When God commanded the Jews to attack a village and kill everyone in it, he did that because they were Giants in those villages.

The movie Noah that just came out was so blatant in trying to hide that fact and even made the Watchers look like decent rock people lol. One, they sure were not helping Noah and two they were not rock people. God had already sent his arc angels to bind up the evil watchers on earth so they could not stop Noah and I think you will eventually find out that Atlantis was the home HQ of the Watchers, a place that the Arc Angels utterly destroyed.


Shame how people who very limited IQ dont seem to understand that when people live near these sites they get used to the sound of chattering and banging from below. Im not some anti industrial activist ive never been to an anti fracking rally and i find that those who do are a bit dim, governments will do what they want regardless of what people say, and im really sorry aliens dont exist, we got shown evidence of that and yet people refuse to see it when people who used to work at test stations such as groomlake base, they end up doing practical jokes on youtube for the world to see. You know what im talking about. The era of cold war is when most of the ufo sightings took place and that was all spy plane technology. there has never been a visit from ET and there never will be, who would want to study the human race anyway? Greys. dont be daft that was us military experimenting with cloning technology of human babies ( against all treaties and policies hence the coverup, they would rather blame something you cannot ever get your hands on than something you could). If you look at the maths involved with us getting this far from the creation of the earth till now without a major earth shattering doomsday possibility you would then realise were pretty much alone in terms of our own technology and advancements, whenever someone has a breakthrough in research 50 years later you got the quacks all saying its ufo tech.. half of you in 50 years time will think castles were made by aliens disguised as elves and king arthur did exist. we got this far by a fluke, homo sapien used imagination to get where we are. Fossil records prove dinosaurs walked the earth and didnt involve into super species even though they did this for millions of years, what humanity has done happened in a millionth of that time. its our imagination to discover new things is what humanity is all about, not some whacky alien seeding our planet for nefarious reasons. a before you sit there screaming at me i did seismic geology at uni.. im not a complete retard unlike some who post here. As for religion, we made that enough said about it. said my peace doubt il post here again on ats. to many whackos out there with freedom of belief.

originally posted by: MediToker
I'm pretty sure the catterick explosions are tied into this something happened to the a1 and six miles was shut down for hours, anyone heard any more about this?

Maybe a landing of an E.T. craft that the authorities had to cover up.

Quite easy for Aliens to us a straight section of the A1 as a landing strip.

The loud bangs where of course the E.T. craft entering the Earths atmosphere.

I agree that it is possible for sound to travel that far, given the extremity of the event. But... we're talking over 3000 miles difference heard around the same time. Surely if there was some sort of meteor or huge explosion satellites would have picked something up or people using telescopes? Or seismic surveillance? Ships in the mid-Atlantic???

There was something a bit weird last night here where I live, I tossed and turned because a hot night, and there was a loud droning sound, (sort of like that incessant droning sound above Gaza end of 2012 via Ustream), I put it down to maybe a freight train idling on the tracks for a few hours (waste of fuel imo), but this morning I woke up to the news there was a 3.4 (small) earthquake at a depth of 9km just over 200kms away.

There's faultlines not too far away from where I am, but underneath us there's disused and currently working mines.

Obviously this is unrelated to events a couple of days ago but felt compelled to put in my 'experience' to see if there was something seismic or some other natural occurrence of a fantastical nature to explain the sounds heard 3000+ miles apart. But then...

it can't have landed at Coningsby, not without me, my friend and all the other Coningsby spotters knowing about it, i never heard anything, im only an hour from Coningsby. my friend across the road has an SBS which tells him exactly what is flying over or due to fly over, hears the pilots talking the lot. I'll ask him, but he would have said and it would have been spread like wildifre between Coningsby spotters.