"General, did you notice in all of your, say, 20 per cent of the unexplainable reports, a consistency as to color, size, or speed—estimated speed?"

Like a chorus in Pinafore, several correspondents exclaimed in unison: "None whatsoever?"

I almost expected Samford to come out with, "Well, hardly ever." Instead, he said very firmly, "No."

It would have been folly to admit that such patterns were known; it would immediately have nullified everything Samford had said. But such groupings did exist; even the Project report in 1949 had listed two distinct types and certain frequency periods. However, General Samford was not Director of Intelligence at that time, and he may not have known of this analysis.

By now the conference had run well over an hour. Some of the reporters were anxious to close it and get their stories filed. But one man made a last stubborn try to crack the simultaneous sighting angle.

"General, how do you explain this case? . . . The Senior Controller said whenever one of the unidentified blips appeared anywhere near Pierman's plane he would call Pierman and say, 'You have traffic at two o'clock about three miles,' and Pierman would look and say, 'I see the light.' This was done not once but three times. And then this past Saturday night Bames vectored at least a half a dozen airline pilots in to these things . . ."

"I can't explain that," said Samford.

The reporter looked amazed; he had obviously been expecting another evasion.

"Well, how do you explain ... is that auto-suggestion or—"

"I can't explain it at all," admitted the general.

But a moment later, after a comment on mesmerism and mind reading, he compared it with spiritualism. "For many years, the field of spiritualism had these same things in which completely competent creditable observers reported incredible things. I don't mean to say this is that sort of thing, but it's an explanation of our inability to explain."

Near the last, a correspondent asked him if the Air Force was withholding facts.

The general replied that only the names of sighting witnesses were withheld.

"How about your interpretation of what they reported?" the newsman said bluntly.

Perhaps Samford's guard was down; it had been a trying 80 minutes, and he looked tired.

"We're trying to say as much as we can on that today and admit the barrier of understanding on all of this is not one that we break."

Knowing the service phrase "break security," I was sure this was what he meant. Later several service friends of mine agreed. But evidently none of the press took it that way, for no one followed it up.

As the conference broke up, I heard some of the newsmen's comments.

"Never heard so much and learned so little," one man said acidly.

His companion shrugged. "What did you expect? Even if they know the answer, they wouldn't give it out now, with all this hysteria."

Pushing through the crowd toward General Samford, I heard a press photographer jeering at a reporter. "OK, wise guy, I told you there wasn't anything to the saucers."

"You're nuts," snapped the reporter. "Didn't you notice the way Samford kept sliding around hot questions—and the way he kept taking Captain James off the spot?"

"I think you're wrong," said another newsman. "I believe it was on the level."

When the group around Samford thinned out, I asked him the two questions I'd had in mind.

"How big an inversion, General—how many degrees is necessary to produce the effects at Washington Airport, assuming they're possible at all?"

He looked at me with no change in expression. I would not want to play poker with the general.

"Why, I don't know exactly," he said. "But there was an inversion."

"Do you know how many degrees, on either night?"

"Excuse me, General," someone broke in sharply. I turned around and saw Dewitt Searles, now a lieutenant colonel, eying me suspiciously.

"You still on this saucer business?" he said.

Without waiting for an answer—I had the feeling he had merely wanted to cut off my questions—he turned back to Samford. "Any time you're ready, sir; the newsreel men are waiting."

And with that, off went General Samford to the newsreel room and recorded the short film that has erroneously come to be known as "The Press Conference".


Book available online for free at: 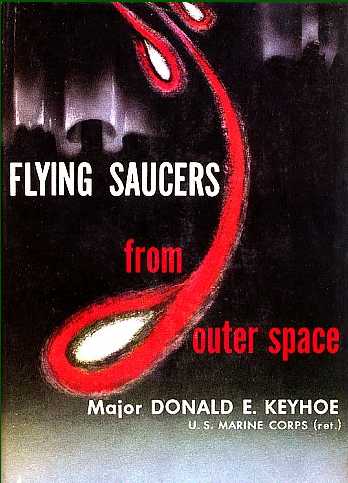 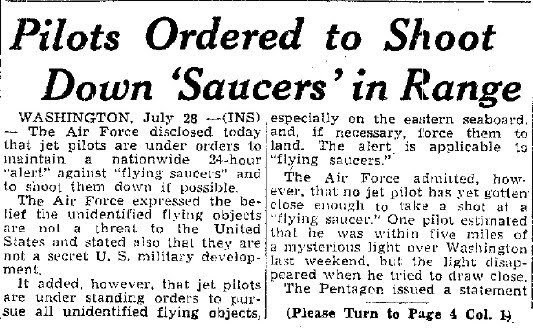 
"I talked to both Al Chop and Major Dewey Fournet, both associated with the official UFO investigation in 1952, and who had been in the radar room on that second Saturday.

They told me there had been one intercept that had gotten “hairy,” meaning dangerous.

According to them, and they were watching in the radar rooms at Washington National and listening to the interceptor pilots talking to one another,


as the Air Force attempted to catch the UFOs the interceptor pilot found himself surrounded by the lights.

It was all tracked on radar.


What the pilot, William Patterson said over the radio, the men in the radar center could see on the scope.

"Patterson decided to break off the intercept at that point."