Did NASA just admit they never put Man on The Moon? [Video]

originally posted by: cheery1
a reply to: Imagewerx

Yes,NASA are. There was one scheduled for this summer when I was in Florida (the reason I went) but it got postponed until the day after I left.

Yes it was a Falcon 9/SpaceX rocket,launch was put back by a week.

originally posted by: cheery1
Come to think of it...
Who and in what..
Are taking supplies to the space station now that the shuttle isn't shuttling..?
Anyone know?
curious.


Is this what you are looking for?
List of unmanned spaceflights to the International Space Station

Until I looked it up again,I didn't remember them having any success with these experiments,for which I apologise

Fine.. I could have excepted that and moved on.. But.. you go on

But these were short duration and wouldn't be able to do the uninterrupted broadcasts we actually did receive,
because of how quickly the land based transmitter would be out of range.

Out of range..? Sorry BUT.. They did and they still do..
The word "relay" might give you a clue. One of (the two in Australia at that time) these relay stations, the Carnegie Corporation and the Rockefeller Foundation funded half the cost.
( Hmmm Rockerfella & Co.. could they possibly "make" on a hoax that financially crushed Russia? )

Back in the 1950/60s they wouldn't have been able to do a seamless transition from one transmitting station to another without someone noticing it..

Which contradicts your own point.. as How do you think they would have televised it without switching to the Australian relay as they claim to have, under nine minutes into the broadcast?

And no a crater would make crap reflector dish,it's nowhere near the parabola shape that's needed for them to work properly.

Thankyou batman.. but that was meant as joke to soften your overt aggressiveness.
You still have to remember..
"Moon bouncing" or Operation Moon Relay was spun off from a classified military espionage program known as Passive Moon Relay (PAMOR) which..
Sought to eavesdrop on Soviet military radar signals reflected from the Moon.
The Project Diana program of the U.S. Army Signal Corps detected radar waves bounced off the Moon in 1946.
Ideas for using the moon start from 1928.

I think we can agree, that we dis-agree.. and leave it at that.

You are obviously clueless on telemetry tracking and how it works. Are you aware apollo didn't know it's position it relied on ground stations to provide that information. The ground stations used there telemetry basically a radio that makes beeps. These beeps can be used to calculate how far an object is from tracking stations. How do you think the news could tell astronomers where to look because surprise they were observing the misions. Information on where to see them was even posted in astronomy mags such as sky and telescope.

You really can't be this naive your joking right???

originally posted by: dragonridr
a reply to: cheery1
You really can't be this naive your joking right???

Another 'Google scholar' by the sound of it?

posted on Dec, 8 2014 @ 09:11 AM
link
a reply to: dragonridr
Not that I should really bother with you, as you ignored my last reply and start this post slinging accusations.
But.. why not.. I'll play..


You are obviously clueless on telemetry tracking and how it works.


LOL.. What makes you say that sunshine of my life..
(and oh so judge-Mental??)

Are you aware apollo didn't know it's position it relied on ground stations to provide that information.

How do you think the news could tell astronomers where to look?

Listen it's been lovely chat'n with you.. but alas it's 4am and past my beddybyes time..
Maybe I'll check back later and see if you have any more pleasantry's for me..

The most significant event of NASA's history..

And the TELEMETRY RECORDINGS "MIRACULOUSLY" DISAPPEAR..

The "story" goes like this..
The research team conducted a multi-year investigation in the hopes of finding the most pristine and usable versions of the moonwalk. The researchers discovered that the tapes containing the raw unprocessed Apollo 11 SSTV signal were erased.. and reused by NASA in the early 1980s.
LOL.. aint that about the time people were calling HOAX?
This was according to NASA's procedures, as they were facing a major data tape shortage at that time.
err.. yeah sure.. I'll eat that..

At a 2009 news conference in Washington, D.C., the research team released its findings regarding the tapes' disappearance.
They also partially released newly "enhanced" footage..
To DUPE yet another generation into parting with THEIR money..

You're grossly over-stating a non-issue.

The SSTV tapes were created in the event there were issues with the live broadcast. They were intended as a failsafe, so that there could be a rebroadcast. The tapes were never intended to be part of an archive.

Lowry Digital restored the footage from a number of sources, including NTSC video of the live broadcast, and Super 8 film taken of the SSTV transmission received in Australia.


You are the one being duped.

You are the one being duped.

You're grossly over-stating a non-issue.

Again thanks for your opinion...

But personally I find conning people of their money "is" an issue..
Maybe one day they might provide SOLID evidence..
( video footage off a monitor doesn't quite do it for me sorry )

Until that day.. I reserve my right to be a.. Skeptic

Thanx for your input..

But personally I find conning people of their money "is" an issue..


how exactly was it conning people of their money??

was all the infrastructure to support the program, designing and building real working rockets not real??

originally posted by: cheery1
Maybe one day they might provide SOLID evidence.


Nikita Khrushchev admitting the Americans made it to the moon isn't enough?

If not, then either you've been duped, or you have a financial stake in duping people.

how exactly was it conning people of their money??


The question is more.. How much do governments contribute.. Who's money is it that's contributed.


was all the infrastructure to support the program, designing and building real working rockets not real??

LOL.. Those "are" real.. that is not in dispute.
(But then again even props in Hollywood are "real" things.)
Did you have a point??

Nikita Khrushchev admitting the Americans made it to the moon isn't enough?

You then inanely state..


If not, then either you've been duped, or you have a financial stake in duping people.


LOL.. Just two choices..?
Again.. You're entitled to your point of view.

LOL.. Those "are" real.. that is not in dispute.
(But then again even props in Hollywood are "real" things.)
Did you have a point??


yes, if they built real things how is that conning?? they said they would build rockets to get man to the moon and they did, but if you are going to claim that you were conned then the rockets and infrastructure should be fake..

but if you are going to claim that you were conned then the rockets and infrastructure should be fake..

originally posted by: cheery1
a reply to: choos

but if you are going to claim that you were conned then the rockets and infrastructure should be fake..

i agree.. so tell me how it is conning you again given that the infrastructure and rockets were real and did what they were designed to do..


originally posted by: cheery1
Maybe one day they might provide SOLID evidence.


Nikita Khrushchev admitting the Americans made it to the moon isn't enough?


Who cares what Nikita Khrushchev said publicly? In all warfare, Cold War warfare especially, deception is an acceptable strategy that was constantly used by both sides. Nikita was a god damned Communist who would lie about anything if it furthered the goals of the international communist revolution... Deceiving the populations was normal back then and still is to this very day.

I don't know how you feel about the Gulf of Tonkin or the invasion of Iraq in 2003... those are just two examples of deceiving the population... these are manufactured wars.

Nixon told everybody that he was not a crook, and then, he told them that when the president does something it is not illegal. Who are you gonna believe? Nikita or Richard Nixon, the 37th President of the United States?

It's 2014 and nobody can break the Russian Glass Ceiling. Maybe Putin will do it. Russia has the industrial capacity and the technological means and the 'glorious leader' aspect and Putin has the motivation to enhance his historical resonance, the legacy of his leadership. 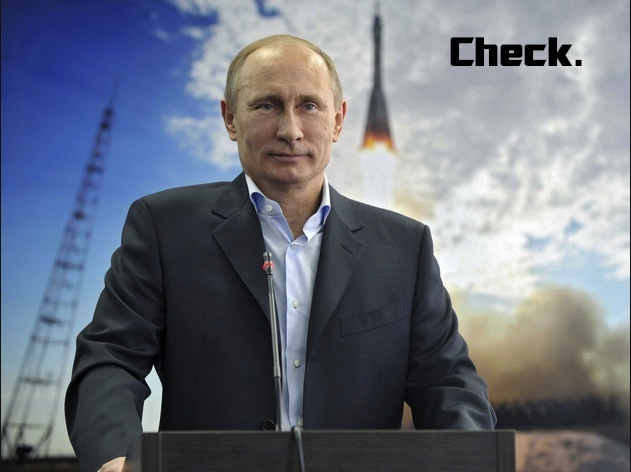