Of course you mean the immediate riots and burning and looting of homes and businesses.......right?

posted on Nov, 29 2014 @ 11:28 AM
link
Drugged up to his eyeballs, naked, sweating, biting people, chasing campus security - what kind of upbringing does that indicate? he had to be put down, basically like a wild animal, as he was behaving. Sad, but true. Thankfully no members of the public came to harm. I'm not sure what the thing is with experimental drugs that make people go crazy. Stick to cannabis.

originally posted by: MX61000
a reply to: ManBehindTheMask

Not all black people where sold out by their brothers, you people love to try to excuse yourselves

What do you mean "yourselves"? I never enslaved anyone, nor do I know anyone who has.

But in the midst of all that I want to add, you enslaved the direct lineage of God

Huh? I be extra confused now.

As a mixed Scot-Norwegian I naturally chose "other", as white seemed racist to me since it was the only one on the form that was mention by actual skin color.

I was fortunate that my schooling was paid for with the GI Bill (same as any soldier of any race). I am sorry to hear you are caught in the college circus. Good Luck.


You think entirely to much of yourself. And assume way to much about everyone else

Oh my, we see where you mind is at, I like my friends, and they are black. I would never enslave them. Someone has "gone back to the future"

^^ And this BS is what I mean by slavery of the mind regarding black culture. If you continue to play the victim card while perpetuating racism at the same time, nothing will change for the black community. Ever. Nothing is stopping black people from seizing life and getting out there in the world. Nothing other than the stereotypes that continue to be perpetuated like MX just did, and the enablers that make them think this line of thought is ok & productive. It is neither.
edit on 11/29/2014 by Nyiah because: (no reason given)

Caucasian or white, there was never an option on the grant application. Maybe I missed it.


originally posted by: snarky412
So, why the difference in reactions? Or lack of actions, should I say

I think the big difference is this: 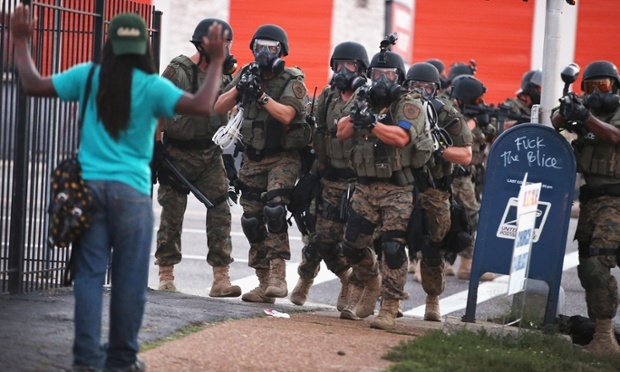 The whole Ferguson fiasco probably could have been largely avoided if there wasn't such an extreme overreaction in the days immediately following the August 9th killing.


originally posted by: ManBehindTheMask
a reply to: Xtraeme
Extreme over reactions....

Of course you mean the immediate riots and burning and looting of homes and businesses.......right?

That picture was from an August 14th article. The shooting was on August 9th. Do you see the man in the blue shirt burning down a home or looting a shop?

The fact is that photos like these incites people to anger and moves them to loot and vandalize.

Because they feel oppressed.

originally posted by: snarky412
Another unarmed teen killed by a cop

Another cop claiming 'self defense'

Another Grand Jury result with 'No indictment' against the cop

Where's the outcry?
Where's the rage and the protestors?
What no looting and burning the town down all in the name of justice?


A two-year-old case involving the shooting death of an unarmed 18-year-old white man by a black police officer is gaining attention on social media in the wake of this week’s protests and rioting in Ferguson, Missouri.

Gilbert Collar, a white, unarmed 18-year-old under the influence of drugs was shot and killed Oct. 6, 2012, by Officer Trevis Austin, who is black, in Mobile, Alabama. Despite public pressure for an indictment, a Mobile County grand jury refused to bring charges against Officer Austin, concluding that the officer acted in self-defense.


So, why the difference in reactions? Or lack of actions, should I say

Is it only a 'race' issue when it's a White on Black incident?

Just pointing out the obvious even tho some will say that's a racist statement in itself. LOL

It's the underlying tensions, history and culture in those communities. Ferguson had a lot boiling under the surface. That's the big difference.

originally posted by: MX61000
a reply to: Nyiah
You people just say this and that on the internet for stars in flags, but in reality it's a whole different ballgame..
So people are so ridiculous...
#No Justice No Peace...

No, dude, it's simple. If you don't want to achieve something, you won't. Change in perceptions have to happen from people like you first & foremost, because that's where racism is still running strongest & deepest. If you refuse to fix that, it bleeds over into thoughts, ideas & behaviors in communities, and it runs rampant while people claim the exact same of others not perpetuating those mindsets.

You cannot get a free pass for it, no one else does.


MX I am going to tell you story, and you tell me if the actions of the black men accused were right to do this to a white couple that they did not know.

White couple for first time, goes on a date, is abducted after their date, the black men (which I believe was four of them), killed the man first, then ganged raped the female. After they were done, they poured bleach down her throat.

No uprising about that incident. That news article, has stuck with me. Don't ask me to find it. Forgot where I saw it.

Is that acceptable to you? Did they do anything to your ancestors to deserve that? I don't believe these men were ever prosecuted either. But, their action that night, were just saints.
edit on 29-11-2014 by Diabolical because: (no reason given)

Apparently none of those things have solved the problem when you have situations like this:

Without a doubt, the legacy of racial discrimination
across centuries continues to impact economic
disparities, and so young African Americans
start on an uneven playing field. African
American young adults have less economic and
educational opportunity due to a lack of inherited
wealth from previous generations. This
results in persisting deficits in their parents’
net worth and low homeownership rates. The
average college-educated, middle class, white
American has a net worth of around $75,000.
In contrast, a similar college-educated, middle
class black American has a net worth of not even
$17,500.9

Moreover, a number of scholars have examined
the black-white employment and wage gap and
several studies have found evidence of current
racial discrimination throughout the hiring process.12
For instance, one well-publicized study
found that fictitious resumes with white-sounding
names received 50 percent more callbacks
for interviews than those with African American-sounding
names, despite the rest of the
resumes being identical.13 Indeed, according to
one survey, more than a third of African Americans
reportedly experienced racial discrimination
during a hiring process.14

Can you imagine how much worse it would be for the black if we didn't have grants/affirmative action, etc.?

posted on Nov, 29 2014 @ 11:50 AM
link
a reply to: Xtraeme
I do and like yourself you don't know the context of that picture. They could be trying to get down the street to where something was going on and this guy but his hands up so they knew he wasn't involved...for all you know they weren't even concerned w this guy. So trying to take one picture and use it as an example is both irresponsible and dishonest

What I do know is that between the day of the shootint and the date U claim this pic was taken, many homes and businesses were looted and destroyed...

Again proving the point of my question earlier

Could you imagine how much better it would be if so many knew they couldn't rely on a crutch because of their race. And listened to their black leaders who tell them to pull themselves up and stop making excuses


Could you imagine how much better off they would be if they actually listened to people like Martin Luther king and actually understood his message. Instead of falling in line w people like Jesse Jackson and al sharpton?

Can you imagine those numbers if Gates, Waltons, Buffet, and the like were removed?

The 1% are white families and the hold the reins on us all regardless of skin tone.

Or am I missing the "average" part of the situation wrong? I have slight damage so bear with me a little.

You think Collar was smoking weed?

I was referencing Collar when I wrote that. He was on a hallucinogenic when he was shot. I doubt even you would argue that L S D is a mild form of chemical entertainment.

If you had read my first post then you would know that I said Collar wasn't smoking weed. Your post covered both Collar and Brown.

3) Who says the African-American community isn't outraged by gang culture? Do you know the history of black gangs and how and why they got started? Yep - because of social isolation by whites - because of anti-black violence by whites.


This whole post is lacking in adequate knowledge of American history and misleading about whites being the only "race" who are racist.