a bit of kindness for the holidays.

i've basically been trailer trash for a couple of weeks now. i own property, but spend most of the year traveling the southwest u.s., living in my r.v., anyhow.......
my friend bill hasn't been doing so well as of late, so we just parked our rv's in a rv park near the veterans and civilian hospitals just in case there was an emergency.
when we moved in, we told the owner of our situation, just in case an ambulance was needed etc....
he noticed we only had our rv's and actually told us where the spare key to his x-tra work truck was, just in case we needed to move quick.
that was beyond anything i would expect, he never met us before.
anyhow, we were just gunna' order a pizza for thanxgiving, but he came by with his wife, 2 huge plates of food with all the fixings, including a plate of goodies for maggie, my awesome pooch,
even a couple of cold sam adams to boot.
man was that good, and so unexpected.
every now and then i get a nice boost regarding the kindness of some humans.
the best part about it, they got me thinking about how i'll pay it forward to someone else.
not in the situation to do something like i used to, but i'll come up with something.
years ago when i had my store in silver city, n.m., a few of us would get together
and put out a thanxgiving dinner for whomever wanted it.
homeless, single parents, poor locals, sometimes we'd feed over 100 people.
we'd cook everything in the apartment behind the store.
we did this for 5 years straight, but guess what happened the 6th year?
right when we were done cooking, and laying everything out on picknick tables behind the building,
the health department came with a bunch of cops and shut us down.
they wouldn't even let us fill plates to go for all the people waiting in line.
#ers, what a waste.
just thought i'd share the experience, hope it's not to off topic for here.

posted on Nov, 27 2014 @ 07:16 PM
link
There are good people still believe that. And their is still bad ones. Unfortunately i am homeless. I stay either in the shelter or with a friend I met recently. Anyway today i went to help out at a church sponsored thanksgiving dinner for the homeless and after i had a really nice meal too. On the way back to the shelter i got mugged. Two thugs lambasted me from behind and too my bookbag. Really sucks too cause i lost all my soaps, my good clothes for looking for work, shower shoes and my phone. I also got some nice scrapes on my head to boot. I am now back at the shelters rec center on their computer.

The friends I met here have been helping me out by giving me some soaps and toiletries i lost and another gave me a old beat up book bag.

Through all of this I still had a great time volunteering at the church sponsored dinner and meeting new people.
HAPPY THANKSGIVING everyone.


ETA: Here's a pic of my mishap today, one of the guys at the shelter took for me and we was able to upload it. 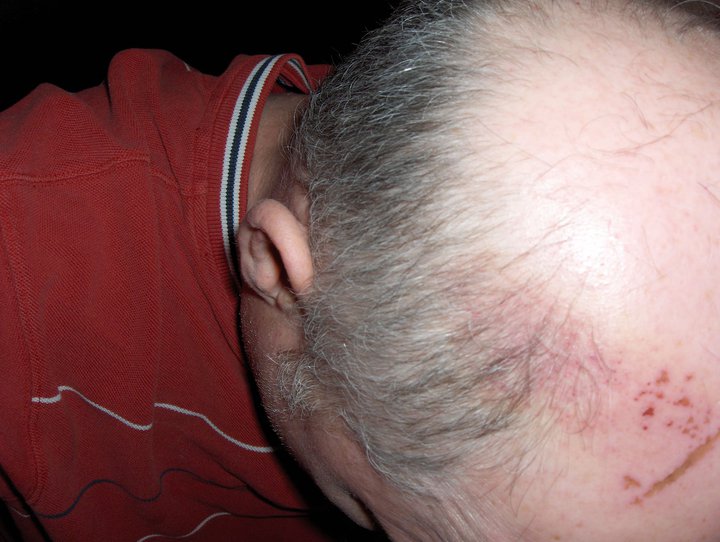 sorry to hear about that. things will get better, i've been where you are in my younger days.
i also believe in karma to a point, as long as we keep caring about and helping others it will come back at some point.

posted on Nov, 27 2014 @ 08:45 PM
link
They are good people in this world they are a little hard to find but they exist. Just keep your head up and as for the turkey dinners 5 yrs in a row that puts you in the same category. Lots of people don't lift a finger to help their neighbors let alone feed a stranger so your ace's in my book.