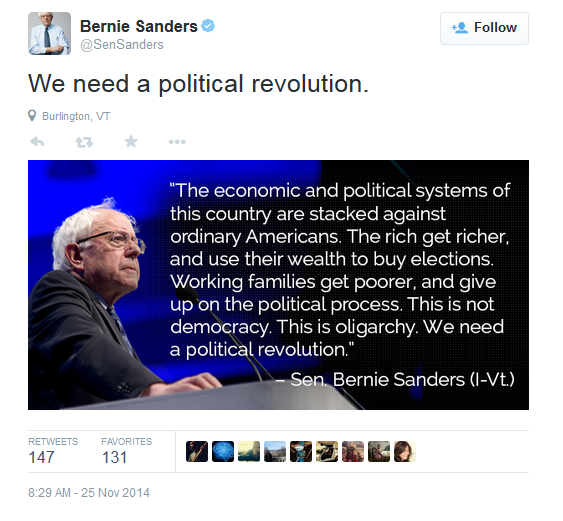 "We need a political revolution in this country," Sanders said, to applause. "Politics is terribly important, and what happens in Washington and state capitals is also enormously important." A largely older, markedly liberal audience listened to Sanders for over an hour inside the student center of the local university. Before the event started, attendees chatted about the senator coming to Dubuque and whether he was going to run for president. Many said they hoped so, mostly because they want a liberal option in the Democratic primary in 2016.

"[The] middle class is collapsing. I know that the gap between the very, very rich and everybody else is growing mightily. I know there is profound anger at the greed on Wall Street and corporate America," he said. "Anger at the political establishment. Anger at the media establishment. The American people want real change."

"The Koch brothers are going to spend $400 million. Do you know what their agenda is?" Sanders said. "Do you know what they believe in? Let me tell you what they believe in. ... They want to end Social Security, Medicare, Medicaid. More tax breaks for the rich and large corporations." He added, "Nobody in America wants that except the billionaire class, and yet they are now able to put hundreds of billions of dollars into the political process. This is a real danger to American democracy.”


I would rather vote for Bernie Sanders than Hillary Clinton or Mitt Romney, but that is imho.

Whatever, the guys on top (and I don't mean the Koch brothers--they're just upper middle-class) need to be reined in. Unfortunately, they have achieved such a degree of power in the West as to make their overthrow essentially impossible--- at least as far as I can see.

But I know truth where I hear it.

I didnt know there were any politicians like this left, surely, a dying breed.

But if someone like this ever became president, and stuck to their guns, you have to think.

The Coch brothers spent 400 million to sway things their way ?

How much would it cost to kill someone ?

How much would it cost to kill a president ?

400. Mill buys alot of bribes, how much would they spend to get rid of someone tring to " undo" all their damage ?

Politician have been making empty promises as long as I can remember;

if only they could be held accountable!

Thats why I added. " and stuck to their guns "

originally posted by: Tusks
Bernie claims to be a Socialist and is now cheer-leading for the Middle-Class???

Probably because as an American you have no real idea of what socialism is - you think it is the same as communism and seizing everyone's property and other BS that the rabid right puts about.

Socialism is no more a single philosophy or policy than christianity is a single religion. So there is not necessarily any conflict between being socialist and supporting the "middle class"

posted on Nov, 27 2014 @ 04:21 PM
link
a reply to: AlaskanDad
Thanks for posting this. Bernie is one of the only Out Spoken Politicians who truly gives a damn.
Vote 3rd Party, always.

Which when loosely translated means, "the man is a snake."

Until this career politician and dual Israeli-American speaks out against the AIPAC lobby's dedication to using naive U.S. taxpayers to further a Zionist apartheid agenda, then he simply can not be trusted.

posted on Nov, 27 2014 @ 06:11 PM
link
Sanders is just another lying politician. Don't fall for his b.s. Don't be swayed by his speeches, look at his voting record!
What's he done? Nothing. He's just another career politician!

posted on Nov, 27 2014 @ 06:31 PM
link
when one points to a single side of the spectrum and claims the biggest doners on that side are the problem then they are only serving half truths. both sides have their fat cats.

originally posted by: Salander
a reply to: Tusks

I understand that when I give up my right to produce, distribute or exchange goods and services as I see fit--that I am putting my life in the hands of a bureaucrat elected by idiots or appointed by those in power. And that I will not do voluntarily.
"so·cial·ism
ˈsōSHəˌlizəm/Submit
noun
a political and economic theory of social organization that advocates that the means of production, distribution, and exchange should be owned or regulated by the community as a whole.
synonyms: leftism, welfarism; More
policy or practice based on the political and economic theory of socialism.
synonyms: leftism, welfarism; More
(in Marxist theory) a transitional social state between the overthrow of capitalism and the realization of communism.

A little bad news for you sir: your life is ALREADY in the hands of petty bureaucrats.

It is still possible to produce certain goods and services with little interference from the State--at least in rural portions of most states. Exchanges of property are still possible without any prior bureaucratic approval, and one's wealth can be distributed before death without necessary State approval. The complete Police State of Socialism--and it would be a Police State--will mean every transaction that is allowed must be approved beforehand, and every other transaction is illegal. But yes, petty bureaucrats can ruin anyone's day even now. They just don't have any easy way to have our lives in their hands, just yet.

True, but there are shades of gray....

If not socialism for banks and poorly run companies, what did TARP represent?