originally posted by: samkent
a reply to: Jchristopher5
Did you notice half way down the page you linked to.


The author doesn't even have the stones to put his name on it.

If the government is trying to cover up 911 why are they not attempting to shut down these kind of websites?
They say the MSM is controlled by the government but 911 conspiracy sites are allowed to prosper?


Because, most ignore them and focus on the MSM version, which is influenced/controlled by CIA.

9/11 conspiracy sites are not the MSM. A cursory review of this CLEARLY shows the Pentagon impact hole does not match a 757.

Plus, I believe that the CIA puts agents on sites with interactive features to continually pump the "official conspiracy theory".


Of the many theories that something other than Flight 77 -- a Boeing 757 -- crashed into the Pentagon, the theory that the plane was a Boeing 737 is claimed by its proponents to be more consonant with the pattern of impact damage than would be the crash of a 757. Proponents have noted that the approximately 90-foot-wide expanse of breached first floor walls is closer to the 93-foot wingspan of a Boeing 737-200 than the 124-foot wingspan of a Boeing 757-200.

While this argument is much more reasonable than those for small-plane or missile theories based on erroneous assertions about a small impact hole, it is flawed nonetheless. The idea that the attack aircraft should have punctured the facade walls out to its wingtips, or even near to its wingtips, is often ridiculed as 'cartoon physics' for good reason.


In summary, the Boeing 737 theory has several problems.
•The damage to the Pentagon's facade is more consistent with the crash of a 757 than a 737.
•The damage to the fence and generator at the edge of the construction yard fits a 757 but not a 737.
•The swath of damaged lamp poles on the plane's approach is too wide to have been made by the wings of a 737-200.
• Specific parts photographed at the crash site, such as an engine diffuser ring, match 757 parts, but not necessarily 737 parts.
•If the aircraft was a 737, then it could not have been Flight 77, and thus requires answers to the following questions: ◦What happened to Flight 77 and its passengers?
◦What was the source of the DNA identified as being from Flight 77's passengers?

Your conspiracy facts seems to be like the wicked witch of the west. Melting away . . . . .

If it had, then we would have clear pictures. All we have seen were blurry, far away shots, with missing frames. Thr Pentagon is one of the most secure buildings on the planet. It has scores of cameras.

And again, flawed knowledge on your part. Mark Bingham did not question if his Mom believed it was him. And, his Mom long ago said that that was how he started his calls.....even to family, "Hello, this is Mark Bingham." Not to mention, Mark Bingham, was a last second passenger....literally...they were closing the doors when he boarded. So, your magical mystical conspirators managed to find out he was on board and then find enough samples of his voice to use morphing technology to spoof his Mom in that short a time.

You just keep digging a deeper hole for your impossible theories.


There is a separate thread for this discussion.
But that's OK because moving the goal post is part of all conspiracy theories.

Do you announce your first and last name when you call your mother?


There is a separate thread for this discussion.
But that's OK because moving the goal post is part of all conspiracy theories.


You were discussing the Pentagon hit, and I replied.

Nice deflection though. Not really.

originally posted by: cardinalfan0596
a reply to: Jchristopher5
Where do you get the mistaken idea it is one of the most secure buildings on Earth? It would be lucky to rank in the top 100.

I don't have proof of where it ranks but I am sure there were much better picures than the ones we saw. If they have nothing to cover up then release the pictures. The ones they provided show nothing, except a crash of an object. I am sure you will requote your camera numbers, and your data which proves nothing. It's all part of the official lie you're spreading.

originally posted by: Jchristopher5
Prove it.

You are the one making the silly claim, it is up to you to back that claim up.... but of course you cannot!

but I am sure there were much better picures than the ones we saw.

How do you know that? Again, you are making the claim it is up to you to back that claim up - but of course you are unable to!

How can they release something that does not exist? Oh, right, the crystal clear video from the nonexistent cameras....

originally posted by: Jchristopher5
So, the official story says that it vaporized on impact.

Care to show where the "official story" states that?

I have seen an engine, which according to Rolls Royce, who manufactured the engines, is not theirs.

No you have not - that is just another truther silly story devoid of facts.

I have not seen evidence of passages and their effects.

It5 has been posted here many times before, but you refuse to believe it as it destroys your silly conspiracy theory!

Still doesn't explain why the plane impact doesn't at all match a 757.

originally posted by: Jchristopher5
Thr Pentagon is one of the most secure buildings on the planet. It has scores of cameras.

You keep claiming that, how about backing it up, including showing thew location and view angles and recording capability of these "scores of camera's" - If you are unable to do that how do you know?

I don't have any more patience for this tonight, but I will come back with vengeance tomorrow.

You should read your official story. We are "told" DNA records were recovered, but besides what exists in the "official lie", what proof do you have this is true? A plane crashes into an official governement building and the same govenment who helped orchestrate the attack tells us they have matching DNA and dental records, and we are supposed to take it all as fact? The same government that has lied too us many times for my trust.

The wings magically folded in and didn't even break windows, and most of the plane was vaporized. That is the official explaination for the lack of significant debris. Titanuim parts vapororzied, but somehow we have dental records. Sure. Just like the paper passport that made is way, through the fiery debris. Two blocks for the WTC.

The official story is full of "miracles" on 9/11. Steel framed buildings, designed for 707 impacts and hurricanes, and one not even hit collapsing like a Janga game. The south tower burns for 54 minutes, while other steel framed buildings have burned for 18 hours or more, and never collapsing. Passports surviving firey infernos. DNA surviving but plane parts vaporizing. Come on.

originally posted by: Jchristopher5
That is the official explaination for the lack of significant debris.

Again, please show exactly where the OS states that the plane was vapourised....

You guys have wore me out.

Having to make up silly stories does that!
edit on 29-12-2014 by hellobruce because: (no reason given) 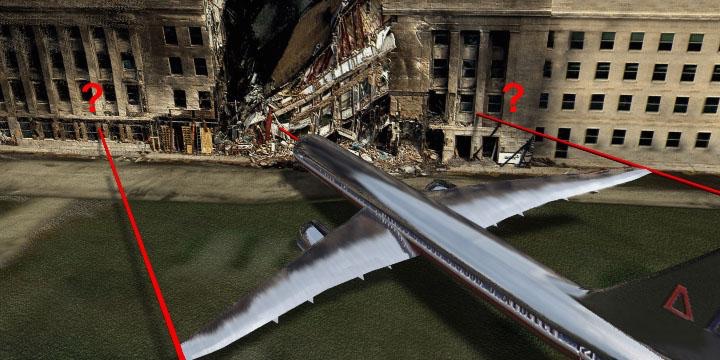 My first photo upload, so I hope it works. Not only was the entry hole too small and low for a 757, but the wings should have knocked out several windows on impact, at 500 MPH.

Smoking gun proof that a 757 did not hit the Pentagon.

posted on Dec, 30 2014 @ 01:02 PM
link
a reply to: hellobruce
An FBI inquiry said that 84 or 85 cameras had a shot at the view of whatever hit the Pentagon. Yet, we get a white, blurry, indecipherable, mass of something hitting the Pentagon. We already know from the superimposed picture above that it wasn't a 757.

Here are the location of several camera start should have yielded a better picture. 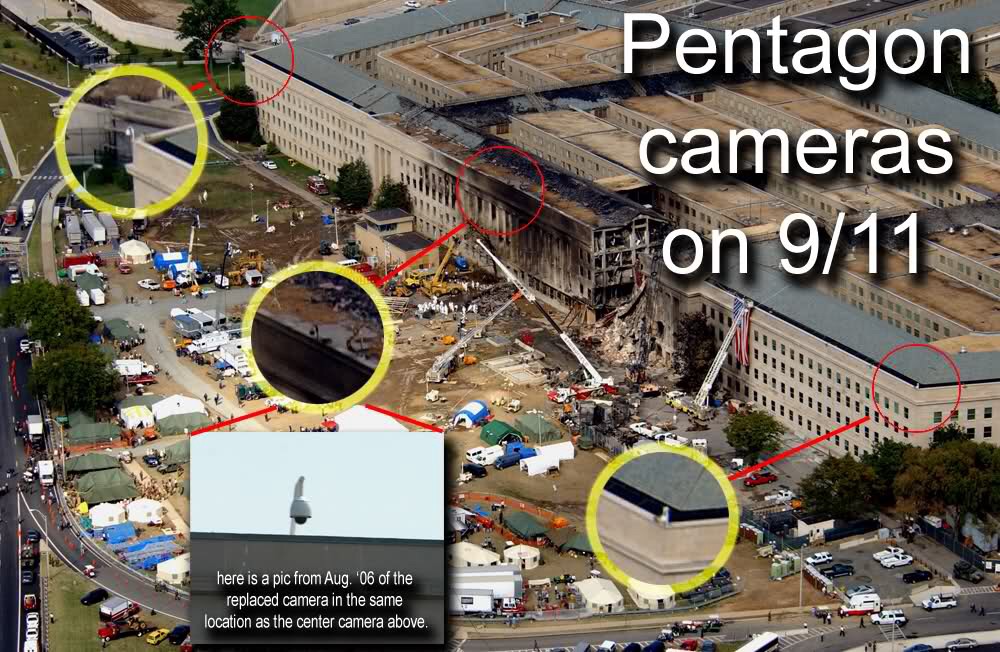 Yet, we are to believe what we were shown was the best available? Nothing but more lies.

Here are the location of several camera start should have yielded a better picture.


This topic was beat to death in another thread over the past two weeks.
Where were you?

This is what happens to anybody who believes in a conapiracy.
They have to jump from topic to topic to prop up their beliefs.
They can't stay on one topic to resolution.

See the thread:
Still think there should be Pentagon video?