There is no cross examination in a grand jury...

originally posted by: raymundoko
a reply to: Gryphon66

There is no cross examination in a grand jury...

That's because the potential "accused" is not typically allowed to testify before a Grand Jury. If the State of Missouri was actually trying to determine if they had a case against "the accused" Officer Wilson ... why was the Prosecutor (who was also involved in a company raising funds for Wilson's defense) leading the "witness" with softball questions?

It is the grand jury’s function not ‘to enquire … upon what foundation [the charge may be] denied,’ or otherwise to try the suspect’s defenses, but only to examine ‘upon what foundation [the charge] is made’ by the prosecutor. Respublica v. Shaffer, 1 Dall. 236 (O. T. Phila. 1788); see also F. Wharton, Criminal Pleading and Practice § 360, pp. 248-249 (8th ed. 1880). As a consequence, neither in this country nor in England has the suspect under investigation by the grand jury ever been thought to have a right to testify or to have exculpatory evidence presented.

Except in Ferguson MO.

I like that you read extremely biased sources...because I've seen that same quote floating around for a couple of days now and I'm not even sure you know what he is referring to.

However, a suspect is absolutely allowed to testify...

Prosecutors typically subpoena witnesses to appear before a grand jury because either:
a prosecutor believes that a witness has information about a crime committed by a third party, and wants to elicit that information to secure an indictment against the third party, or
a prosecutor regards a witness as a target (a person suspected of crime) and wants to develop evidence against the witness.
People called before a grand jury as witnesses do not have to be warned that they are or may become targets. Miranda-type warnings are not required, and, unless they are specifically given immunity (that is, promised that they won't be charged based on their testimony), any testimony witnesses provide to a grand jury may be used against them in a later prosecution.

Again, a prosecutor usually only subpoenas someone they want to incriminate themselves, and Wilson could have pleaded the 5th.

originally posted by: wanderingconfusion
I saw this and was appalled at the level of atrocities this mob mentality is stooping to.

This elderly gentleman is innocent of any wrong doing.

This makes me ill to my stomach and I hope karma catch's up with the individuals responsible for this attack.

Angry or not - this was uncalled for


I'll probably get flamed again due to people not really understanding how the world is controlled by the spineless lowlife that control this world
but it was more than likely the government or police doing this it is typical infiltration tactics used so often by the government to protect their cause and direct people's thinking and so many fall for it it's unreal,
so sad that they pick on defenceless people although it would be interesting to know his previous life to work out if karma happens. there are so many variables to any situation but people just take the one that the media shove on them.

you white Americans are so racist and you don't even realise it , its time for the black Americans to rise up and kick your racist arse's ,

i am white my self despite my profile picture ,

I find it hilarious when UK people try to act high and mighty about race, considering 82% of the UK is white. Only 3% are black or of African decent. 95% of those 3% are located in London, making up about 9-10% of the population of the city. To this day I have yet to see a black man in the UK and I am there often.

What's sad is you don't even realize that London mistreats the black population MORE Than any place in the USA, and your crime statistics among the black community of London speaks for itself:

In London in 2006, 75% of the victims of gun crime and 79% of the suspects were "from the African/Caribbean community.

So less than 10% of the population in London accounts for half the violent crimes involving weapons and robbery.

Tell me again how the whites of America are racist?

Edit: It wasn't even a year ago that I had someone in Wales (Brecon) ask me what black people smell like...I became extremely angry, but decided he may have been asking out of ignorance and was simply a moron. I almost punched him. Ultimately my answer was "your mom's p*ssy", because even us educated type resort to your mom references every now and then. I'm angry just thinking about that guy...

Ultimately you should realize how badly the UK has treated their black population before spouting off about "Racist White Americans", considering our country is literally called "The Melting Pot".
edit on 1-12-2014 by raymundoko because: (no reason given)

for one london and what ever statistics they have does not represent the uk and crime statistics have got nothing to do with people been racist you pretty much talk out of your arse ,

For you to think that crime statistics don't speak towards the racial bias of a community show that you are the one talking out of your arse. Since you aren't in Greater London area you are apparently in the other parts of the UK which consists of a 0.2% black population.

Tell me, why does Scotland have a 0.6% black population? They have several large cities, why so few blacks? Why does Wales have an almost 0.5% black population? Why is 80+% of the London black community relegated to Central London areas like Hackney and Brixton?

Because your countries (The UK in general) treats them as outcasts. I don't mean to offend Scots, but that nation is one of the most isolationist, racist countries I've ever had the pleasure of living. There is even a documentary called The Streets that follows a black street performer "Melo" who is attacked in almost every city in Scotland by racist brutes.

Your media does a good job of trying to make it seem like a well mixed group, but whites make up 86% of the UK. Only 14% are ethnic. Even the race riots recently were spun as "not race riots" by the BBC. So let your state media deceive you all you want, your country is far more racist and less welcoming towards blacks, or immigrants in general, than the USA.

your still talking out of your arse people of any colour and any religion choose where they live there's no area where they are told to live or made to live ,

and as for Scotland they are violent to each other regardless of race ,

and do tell me where your getting your statistics from and from what year ,please do explain how you think crime statistics means the people are racist ,

Are you seriously asking me where you would find out the population percentages of your Country???? Yeah, ignorance is bliss.

Ya asking some one to source their claim is being sooo ignorant!

They were upset when a police officer called them animals, yet they're attacking people indiscriminately just like animals! How can they expect to get any kind of sympathy or respect when they ignore the condemnation from the media, the president and people in their own community, that attacking innocent people and businesses is just wrong on so many levels.

you sound like they already had dignity and respect....can't lose something you were never given in the first place...

It actually is ignorant if someone claims to be from that country. I know my countries race demographic.

Specifically the section on Ethnicity:

Again, that 3% is ALL of the UK. Most of those live in London.

Again, crime statistics by demographic can usually indicate how well a society has handled a specific population.

I linked those statistics above that the black community in London makes up over half of the violent crime offenders. Why?

Deprivation means that the society in general is failing the black population. Why? London is definitely more of a melting pot, but is an exception to the rule rather than the rule of the UK. When it comes to helping the Black population, the UK is actually behind the USA. I find his posts comical and ignorant.
edit on 4-12-2014 by raymundoko because: (no reason given) 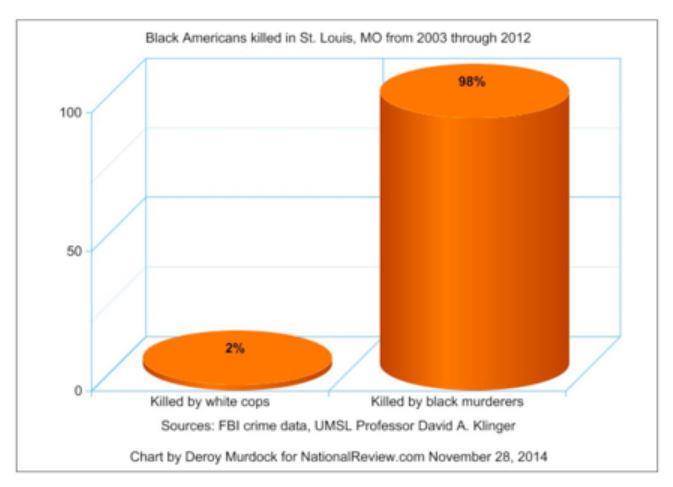 black on black crime has been happening for thousands of years.
It was happening on the plains of Africa five hundred years ago
and is continuing here in America to this day.

2007 hahahahahaha and stop pretending your British as well , if you you was really British you would know them statistics are based on the census which around 20% of the British population actually fill out and return ,

Yes this is wrong and it says

An elderly man was run over after two people stole his car in Ferguson during disturbances Nov. 24, 2014.

Cars are taken like that all the time and they might had used the protests as a cover but the police are kiling hundreds of people each year whilst doning 110 in a 20 mile zone because they enjoy the thril of the chase and they don't even need to answer to a judge.

Setting dogs on people as if they are cattle for protesting about fracking is just as bad as what these theives did and charging a crowd on hourse back in a city center is plain madness.

One little excuse dose not let the police off the hook and people fear the police in the USA today even more than they fear the criminals or theives.

posted on Dec, 7 2014 @ 11:48 AM
link
As I've said before... If people there act like this on the high end when they don't get their way, how are we supposed to believe that Michael Brown didn't throw a fit when things also didn't go his way on the low end?

I am embarrassed by Ferguson, and I feel that they are accomplishing nothing, other than living up to the 'ghetto' racial stereotypes that have been thrown on them since the beginning of this mess.
edit on 7-12-2014 by Lyxdeslic because: (no reason given)

You embarrass yourself. You really represent your country well...