What to feed an ancient dog

posted on Nov, 26 2014 @ 02:34 PM
link
There has been a little chatter about life in ice age europe as of late, and i just found this nifty little article. 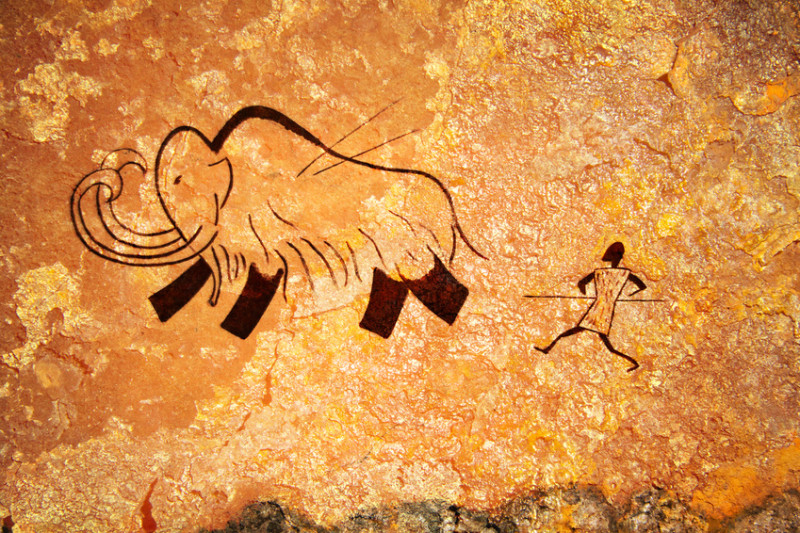 Předmostí I is an exceptional prehistoric site located near Brno in the Czech Republic. Around 30,000 years ago it was inhabited by people of the pan-European Gravettian culture, who used the bones of more than 1000 mammoths to build their settlement and to ivory sculptures. Did prehistoric people collect this precious raw material from carcasses -- easy to spot on the big cold steppe -- or were they the direct result of hunting for food? This year-round settlement also yielded a large number of canids remains, some of them with characteristics of Palaeolithic dogs. Were these animals used to help hunt mammoths?

To answer these two questions, Tübingen researcher Hervé Bocherens and his international team carried out an analysis of carbon and nitrogen stable isotopes in human and animal fossil bones from the site. Working with researchers from Brno and Brussels, the researchers were able to test whether the Gravettian people of Předmostí ate mammoth meat and how the "palaeolithic dogs" fit into this subsistence picture.

They found that humans did consume mammoth -- and in large quantities. Other carnivores, such as brown bears, wolves and wolverines, also had access to mammoth meat, indicating the high availability of fresh mammoth carcasses, most likely left behind by human hunters. Surprisingly, the dogs did not show a high level of mammoth consumption, but rather consumed essentially reindeer meat that was not the staple food of their owners. A similar situation is observed in traditional populations from northern regions, who often feed their dogs with the food that they do not like. These results also suggest that these early dogs were restrained, and were probably used as transportation helpers.

These new results provide clear evidence that mammoth was a key component of prehistoric life in Europe 30,000 years ago, and that dogs were already there to help.


The actual dog skull from predmosti 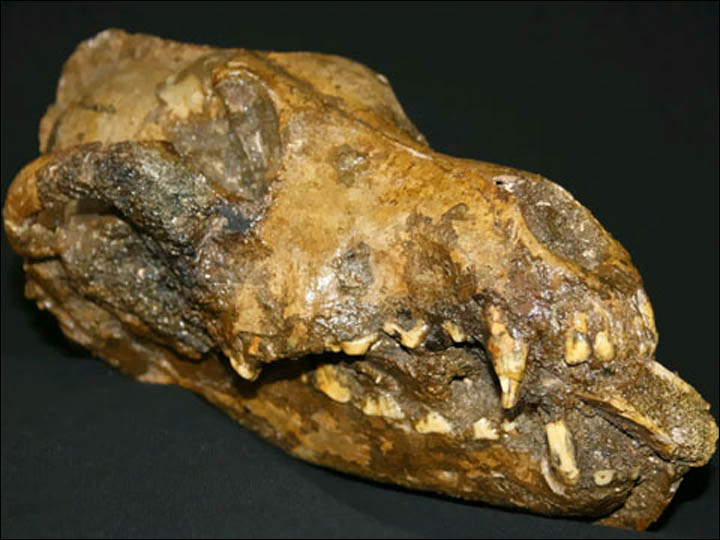 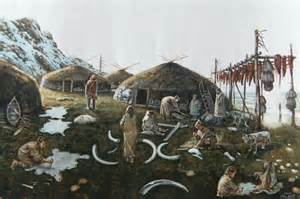 So by 30k years ago dogs were already part of the cultural package of paleolithic europe.
I wonder how the pedmosti dogs DNA would compare to that of other ancient dogs and native american dogs.
There are a couple of sites in central cal that have produced dogs fossils going back at least 17k years and maybe more.


I haven't put this quote into quotes as the software crushs the formatting, link below as to where they came from

"In 1790, François Le Vaillant was given an elephant’s foot for breakfast while visiting a tribe in the African interior. Ever the French gourmand, he wrote in his journal:

…it exhaled such a savory odour, that I soon tasted and found it to be delicious. I … could not conceive that so gross and heavy an animal as the Elephant, would afford such delicate food. “Never,” said I, “can our modern epicures have such a dainty at their tables; let forced fruits and the contributions of various countries contribute to their luxury, yet cannot they procure so excellent a dish as I have now before me.”

In 1859, Paul du Chaillu, the “discoverer” of gorillas, enjoyed a grand feast in equatorial Africa. He later boasted that the feast included all manner of jungle fauna including crocodiles (with lemon and cayenne pepper), a “charming monkey1,” wild buffalo tongue, otter, antelope, gazelle, manatee, water turtles, a boiled gorilla, and plantains (for good measure). Here, he describes the elephant plate in his 1869 travelogue:

The drums are beating furiously again and again. Twenty of the King’s wives have come out, each bringing a dish with her, which they deposit on the mats. Then Obindji … tasted of every dish to show us that no food was poisoned, for such is the custom of the country.

The people all round us were eating. The first mouthful I put into my mouth caused cheer after cheer to go up. “The ntanga is eating! The ntanga is eating of the elephant!”… It was a pretty tough piece of meat, I assure you; the grain was very coarse, and the meat was somewhat tasteless and rather dry.

Boiled meat, no matter what type, will tend to be kind of gross. Just saying "boiled meat" makes me feel queasy. The closest I can imagine getting to boiling would be the simmering done with corned beef. But that is a heavily cured/seasoned meat.

If an elephant is so tasty, that might be the reason mammoths went extinct... Too good to remain alive for long as a specie...
How weirdly cruel fate can be. lol

Thanks for your explanations, I appreciate it!

posted on Nov, 26 2014 @ 04:51 PM
link
Maybe the dogs got the good meat, and the humans ate the lesser and tougher flesh. Dogs and wolves would have an easier time bringing down a reindeer than a mammoth, so it's maybelikely their bodies digested reindeer easier too.

Another consideration would be that men and women ate different foods too. That is not AFAIN mentioned in the article. In many early and present cultures women eat differently than the men by custom and tradition.

i could also imagine that dogs could have been left more to their own vices (or chose to hunt out of instinct/desire/habit/opportunity).

If i were in a pack of "domesticated" dogs living in wilderness, being allowed to have some autonomy while roaming (i.e., not penned up in permanent cages), i could see continuing some more wolf like, pack behaviors.

posted on Nov, 26 2014 @ 05:17 PM
link
a reply to: Hanslune
Hans and Bfft, bringing up the question of cooking mammoth, also brings to the surface, other avenues of inquiry.
Such as the fact that the region was so wood poor the people used bones for fuel. I've read that burning bones don't give off much heat.
So I would imagine that the meat was cut into relatively small pieces. Also carved ivory and bone spoons are fairly common at gravettian sites, that implies broths/soups were being consumed, which implies that they had some sort of container tech, leather bags?. Skulls?
While writing this, I had a interesting association of ideas.
First, as discussed in earlier threads this year and in two recent threads, certain native Americans and europeans share a common Eurasian ancestor.
We can assume that this ancestral group lived a lifestlye not much different than what we see at predmosti or Sungir, living in a wood poor environment burned bones and fat for fuel, both weak flames making cooking moore like just heating up.
Interestingly , I've seen on travel show, a highland Sicilian herdsmen, in his family's ancestral cave, roasting a lamb over just a few coals, with a suckling pig on a spit above it so that the fat from the pig dripped over the lamb and onto the coals , providing for a hotter flame.
Sorry I drifted there for a sec.
So, many of the tribes of California have a common theme in their mythology of fire.
Among the penutians and uto-Aztecans, fire is always stolen from a pre existing people.
The basic story is,
In ths beginning or after long journeys from sometime across the sea or not, the people only have a very weak fire that doesn't cook food properly. By chance or design smoke is spotted coming from a hut in the distance. Then either a lone character or group of characters set out to steal the fire. It's usually multiple characters, with one distracting the occupant by dancing or singing(coyote), while while another sneaks in and steals the fire(mouse, chipmunk). The fire owners give chase and mouse hides 2 embers in his wooden flute flees. Sometimes fire owner, who is almost diefied, sends storms of fog to slow the fleeing thieves. When the pursuers are near the thief either , hides the embers in a cedar and buckeye tree. Fire can always be found in the cedar and buckeye, it's very dry wood makes good fire drills, and a piece of cedar bark is both fire board and source pd tinder.
Or thief gives am ember to deer who runs so fast that when he jumps the river it's course changes, so that's why the nearby river goes back and forth.
So, does that mythology remember back to the days when their ancestors lived on the tundra?

You can boil stuff in side skins by dropping into the broth hot stones (not to hot).

Quote from Samuel White Baker. Was an Englishman who use to hunt large animals with only a knife and some dogs.

The African elephant is equally docile as the Indian, when domesticated, but we have no account of a negro tribe that has ever tamed one of these sagacious animals: their only maxim is "kill and eat." Although the flesh of the elephant is extremely coarse, the foot and trunk are excellent, if properly cooked. A hole should be dug in the earth, about four feet deep, and two feet six inches in diameter, the sides of which should be perpendicular; in this a large fire should be lighted, and kept burning for four or five hours with a continual supply of wood, so that the walls become red-hot. At the expiration of the blaze, the foot should be laid upon the glowing embers, and the hole covered closely with thick pieces of green wood laid parallel together to form a ceiling; this should be covered with wet grass, and the whole plastered with mud, and stamped tightly down to retain the heat. Upon the mud, a quantity of earth should be heaped, and the oven should not be opened for thirty hours, or more. At the expiration of that time, the foot will be perfectly baked, and the sole will separate like a shoe, and expose a delicate substance that, with a little oil and vinegar, together with an allowance of pepper and salt, is a delicious dish that will feed about fifty men.


An acclaimed sportsman, he likely started hunting in the Scottish Highlands; his skills were renowned, and he once gave a demonstration to friends in Scotland of how he could, with dogs, successfully hunt down a stag armed only with a knife, he did the same with the large boars in the jungles of Ceylon. He hunted consistently until his last years, in Europe, Asia, Africa and North America. He forged his skills chasing asian elephants and sambar deer in Ceylon.

Wiki summary of Baker
edit on 26/11/14 by Hanslune because: (no reason given)